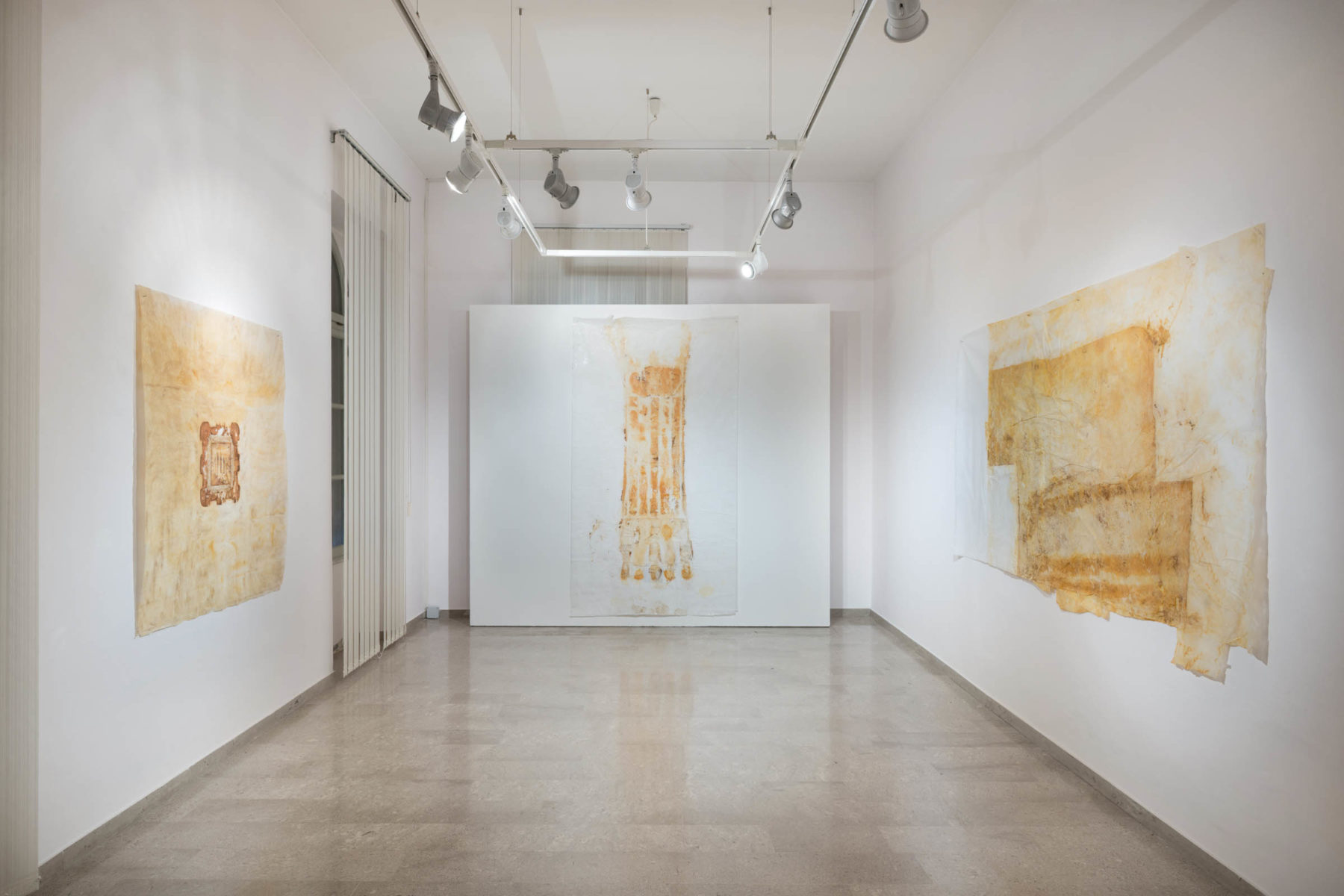 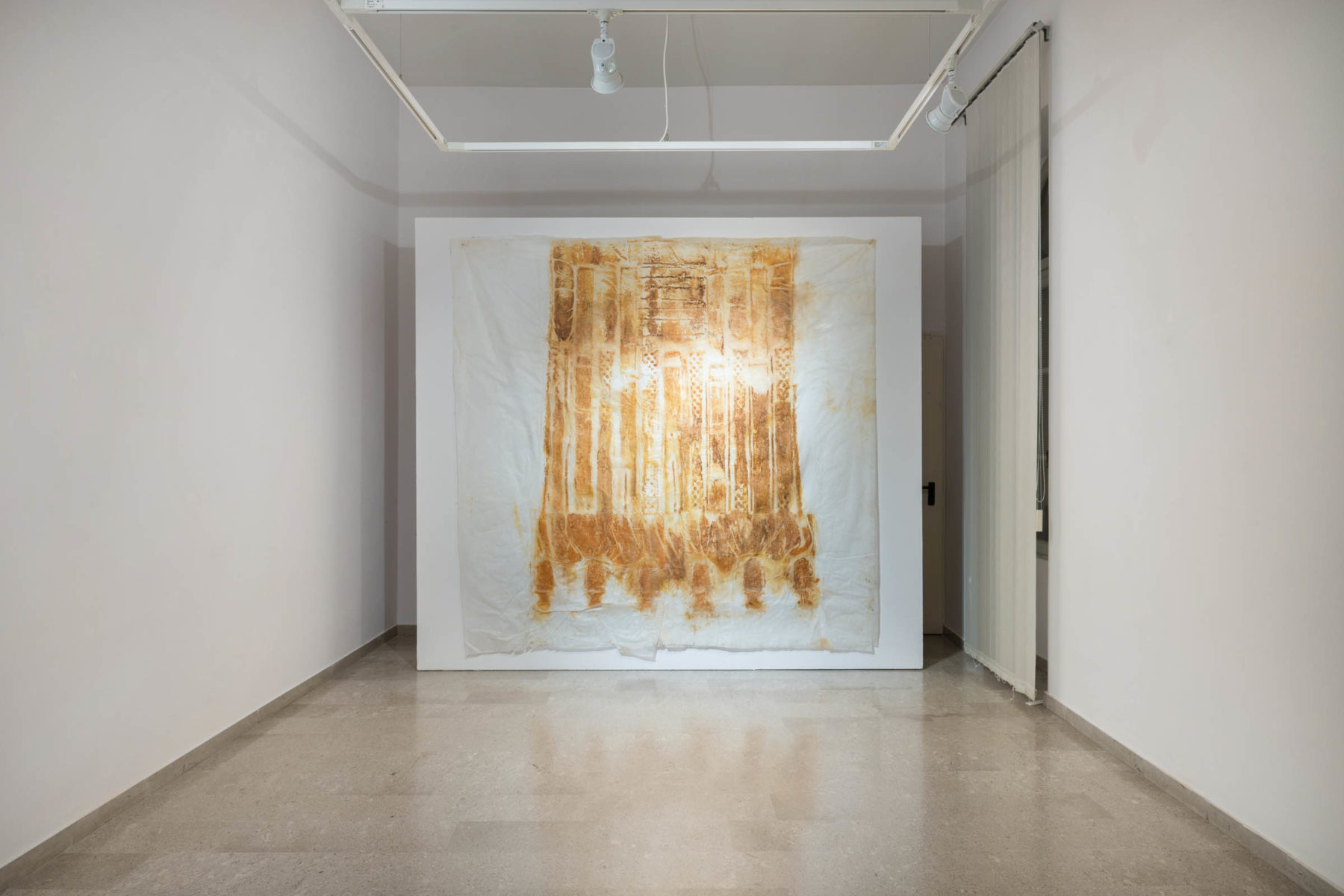 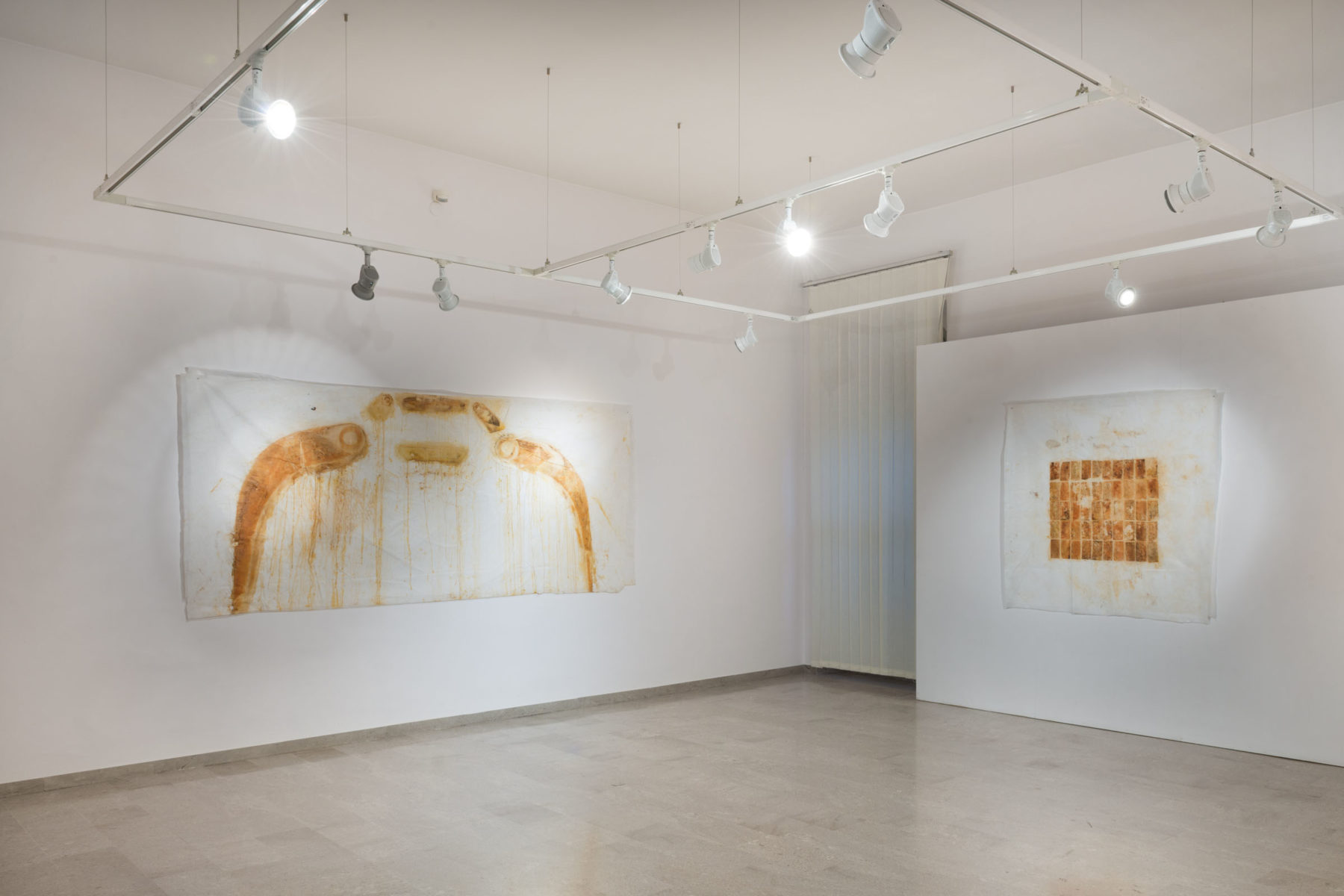 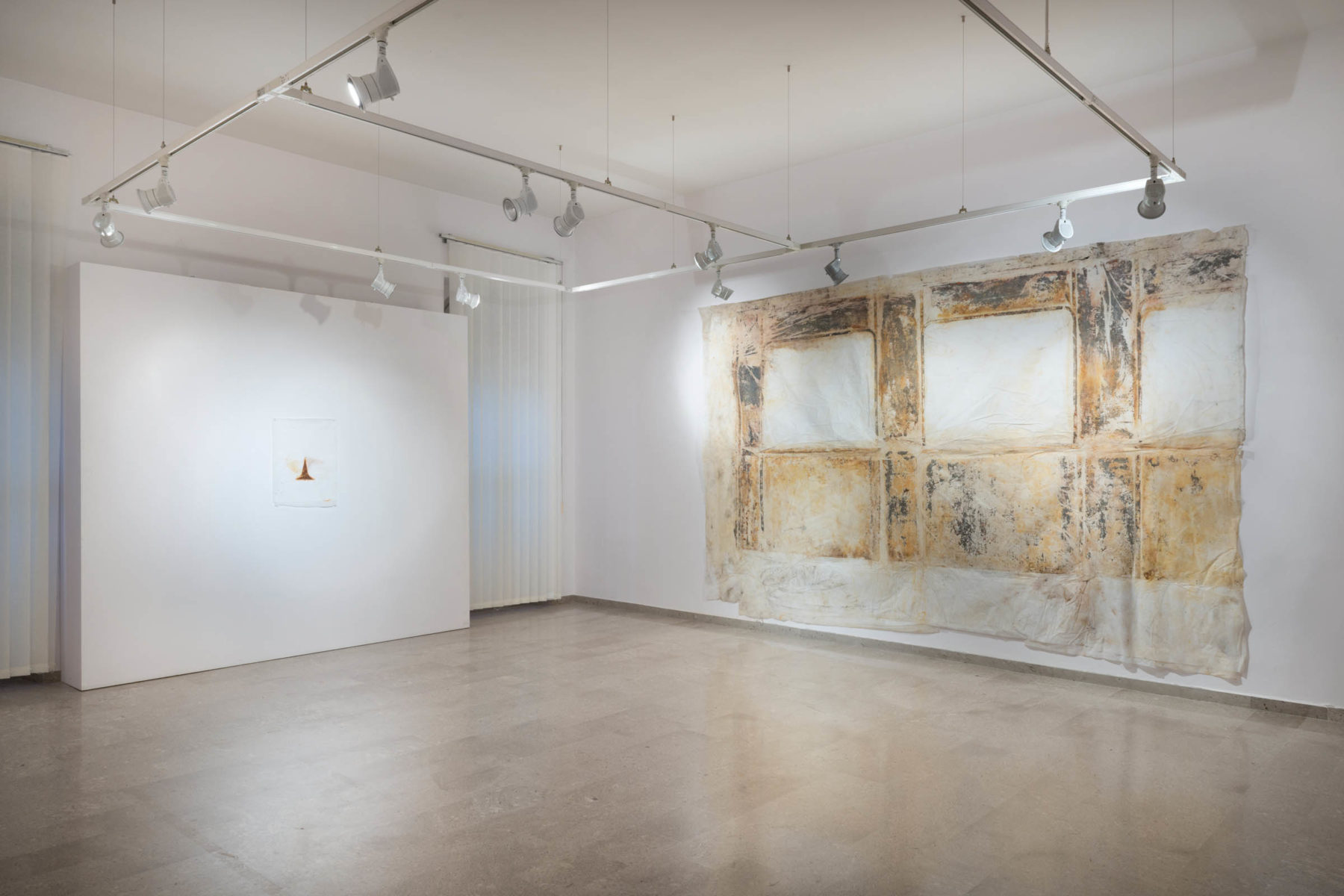 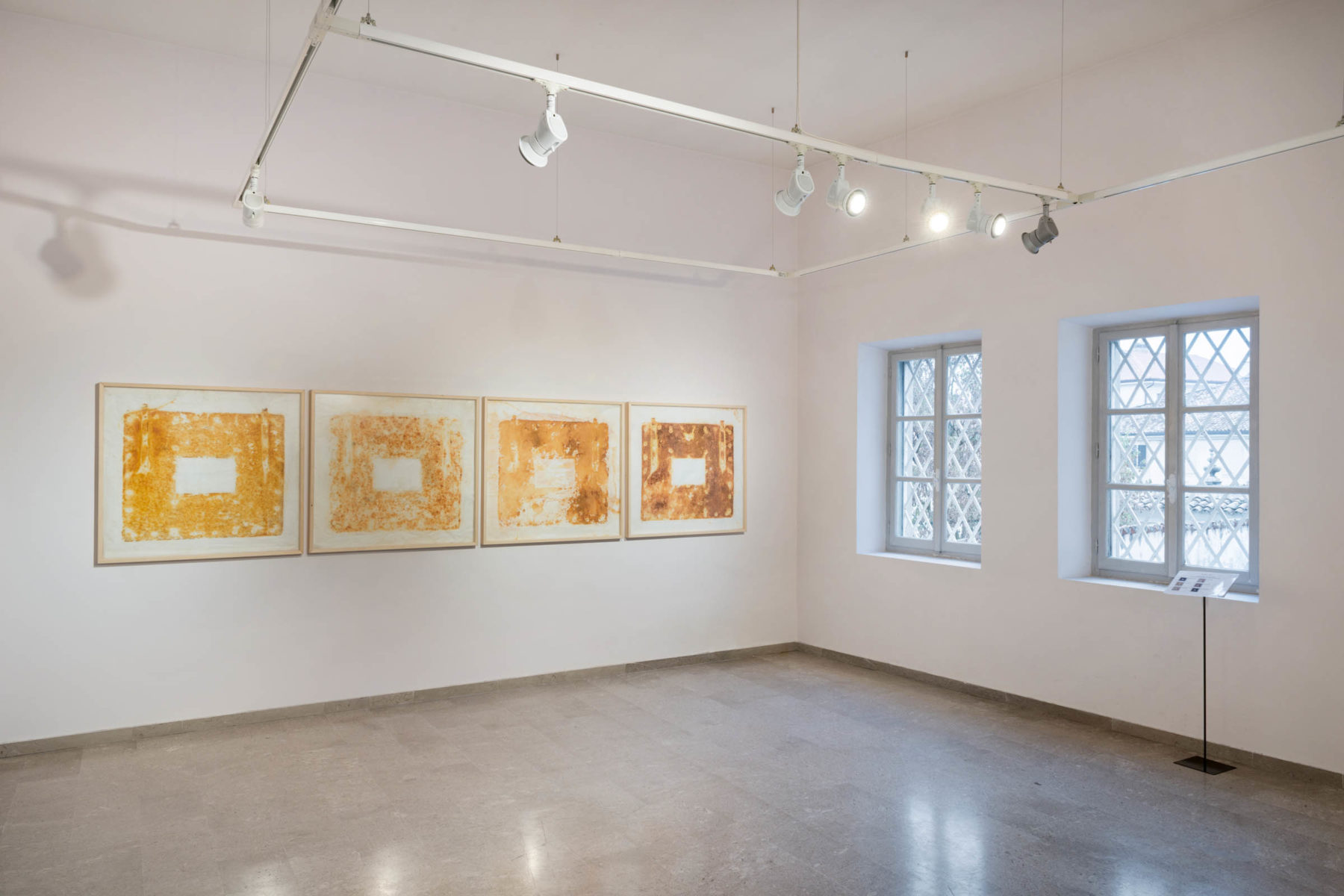 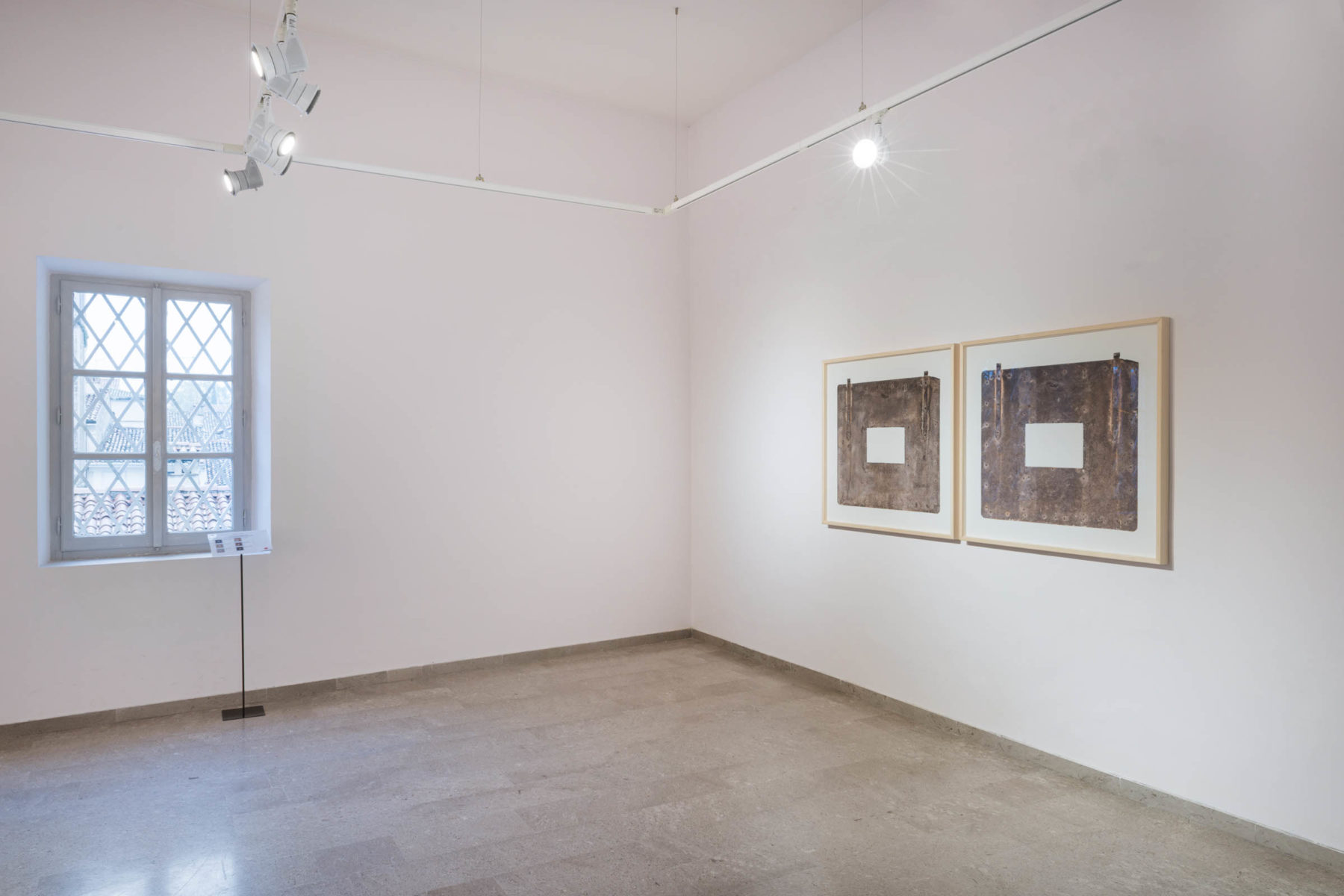 
We must be quite clear that we see the form of things and make them the object of our thinking because something reaches us from outside.
Epicurus, Letter to Herodotus, § 48

Alessandra Lazzaris’ Shrouds are the perfect incarnation of the subtractive-additive duplicity of photography. They have inherited the process for their execution (extraction, recording onto a support, final two-dimensional vision) and the conceptual objectives, given that they are largely the testimony of a specific portion of time deposited on a surface, with all the burden of dirt and dust that the world produces. At the same time, the Shrouds are the fruit of an archaeological activity that happens out in the field, searching for an artefact that catches the artist’s attention. As such, they are born from research that has an approach similar to that of field recording.
But these are also images that tell stories and show us the devastating effects of the passing of time, which envelops all objects and things created by human hands with inevitable rust. This is not just a patina which reveals the time that has passed, but rather an insidious, invisible enemy which threatens (us) and erodes (us), which we would do well to remember.
The Shrouds are the effect of the veil of reality operating at an atomic level that Epicurus spoke of, explaining the way the world makes itself know to us. They are also rips and lacerations, paintings (or unconscious drawing?) and more, that I cannot describe. It is this difficulty that has led me to write about them without the obligation to refer to them directly, writing about them tangentially. My considerations are the fruit of lateral thinking. I myself have been very deeply touched by the germinal properties of rust.

In Epicurus’ flock
One of the most significant aspects of the thinking of Epicurus – long before the scientific theories of the twentieth century – is related to the way in which the sensations that affect our bodies are formed, and in particular images. Essentially, the Greek philosopher explained that there are thin layers of atoms that detach from the objects they surround to hit our bodies to generate that impression. This process occurs as the bodies move closer, through prolepsis and through anticipation, thanks to a veil of atoms which moves towards the perceiving body. This minute veil, an extremely thin film that is generated automatically and continuously, reaches us before the physicality of the object, allowing us to elaborate its image. “And whatever presentation we derive by direct contact, whether it be with the mind or with the sense-organs, be it shape that is presented or other properties, this shape as presented is the shape of the solid thing, and it is due either to a close coherence of the image as a whole or to a mere remnant of its parts”[1], specifying how “the exceeding thinness of the images is contradicted by none of the facts under our observation”[2].
The Greek philosopher is careful to investigate if there may be other causes that create this phenomenon, but confirms that there is no other physical evidence. “Again, there are outlines or films, which are of the same shape as solid bodies, but of a thinness far exceeding that of any object that we see. For it is not impossible that there should be found in the surrounding air combinations of this kind, materials adapted for expressing the hollowness and thinness of surfaces, and effluxes preserving the same relative position and motion which they had in the solid objects from which they come. To these films we give the name of “images” or “idols”.[3] The word images or idols (εἴδωλον in the original text) should be understood in a neutral sense of a portion of reality that hits the eye, not in the negative, illusionary sense of an appearance that does not corroborate the facts, or elaborated in the postmodern reading of Jean Baudrillard.
Thus, according to Epicurean philosophy, the world can be known because infinitesimal portions of the world itself are deposited on our senses. In this way our eyes grasp distance, history, material, surface or colour.

Meaning through retrieval
Field recordings are audio recordings created outside a studio, in environments other than those constructed specifically for recording sound. This approach began at the start of the twentieth century in different areas of study, from anthropology to musical research, and was perfected in the 1960s with the technological improvements in recording instruments. As happened in the field of visual arts with the creation of land art, musicians[4], sociologists and other intellectuals (re)discovered an interest for things which were happening outside institutional situations, and for what we might, for simplicity’s sake, call the world.
The ideological premise of a field recording therefore lies in the interest towards that which is happening beyond the determination of the place, and shifts the attention towards the analysis of non-ordinary facts and structures. In particular, this approach to recording favours the development of new topological approaches: the practice depends on moving around to find interesting or particularly meaningful elements. This slice of the world – which goes beyond the purely acoustic – needs to be sought out, carefully captured and then fixed. An important corollary of this outward-looking methodological approach is that its meaningfulness is incidental and must be found, discovered through exploration, and not produced ex novo working within the borders of that which is known, familiar and established.

Growing through subtraction
Whilst there are differences between various methods of recording images – the use of analogical or digital means for example – we can appreciate the words of Susan Sontag, “Photographs are perhaps the most mysterious of all the objects that make up, and thicken, the environment we recognize as modern. Photographs really are experience captured, and the camera is the ideal arm of consciousness in its acquisitive mood.”[5] Whether we are aware of it or not, we entrust photography with the role of synthesising the images generated by the insatiable appetite of our ego, but also the role of making reality thicker and denser through the evidence of its testimony. In instrumental terms this role of prosthesis for our vision, whilst difficult to explain simply, augments/increases our reality.
In relation to the idea of time and the flow of events, it is reasonable to consider photography as the extraction of an interval (the material time necessary for recording any event), whether it is isolated and fleeting, and thus not tied to the moment that directly precedes and follows it, or the effect of a chain of events over a longer period. As such, photography can record an interval of time which in its singularity represents only itself, or it can be a synthesis of long and incommensurable processes that are beyond our direct control. In both cases photography is a non-destructive subtraction of reality, it is a removal that amplifies and allows us to duplicate a fragment. Thus it is like an act of theft, but it is one that causes a collective gain rather than an individual loss.
Photography acts through addition in relation to reality, revealing a past aspect of reality or a fragment of the world we had not paid any attention to. This unconsciously makes the viewer into a judge and provides them with evidence of what has happened. In this way, the intended viewer of photography cannot be passive, but has the informal duty to react to a stimulus and to understand something about an event.

3Fe + 4H2O → Fe3O4 + 4H2
The encyclopaedia defines rust[6] as “a flaking substance, reddish – brown in colour, that forms on the surface of iron exposed to humidity in the air or in contact with water. Chemically it is a hydrated oxide of a basic iron carbide (prevalently trivalent) formed through the oxidation of iron in the air in the presence of water. The process is accelerated by the presence of certain atmospheric elements, such as sulphur dioxide, salt spray, etc.”
Rust is the effect of the passing of time, of the entropic tendency towards degeneration that is characteristic of every process in human nature. Horatio, in one of the most celebrated passages in all of ancient literature, notes that only poetry can last longer than bronze[7]. He states that poetry alone allows one “not to die completely”. But we might protest that not even poetry is able to stop the voracious vortex of time, which dissolves and turns to rust all things. Indeed the encyclopaedia closes with Cartesian clarity, explaining that “the process of the formation of rust is not impeded over time due to the limited adhesion between the superficial strata that has formed and the metal underneath. As such, in order to prevent the progressive destruction of iron objects it is necessary to employ protective systems, which use different techniques and have varying degrees of effectiveness”. What is left?