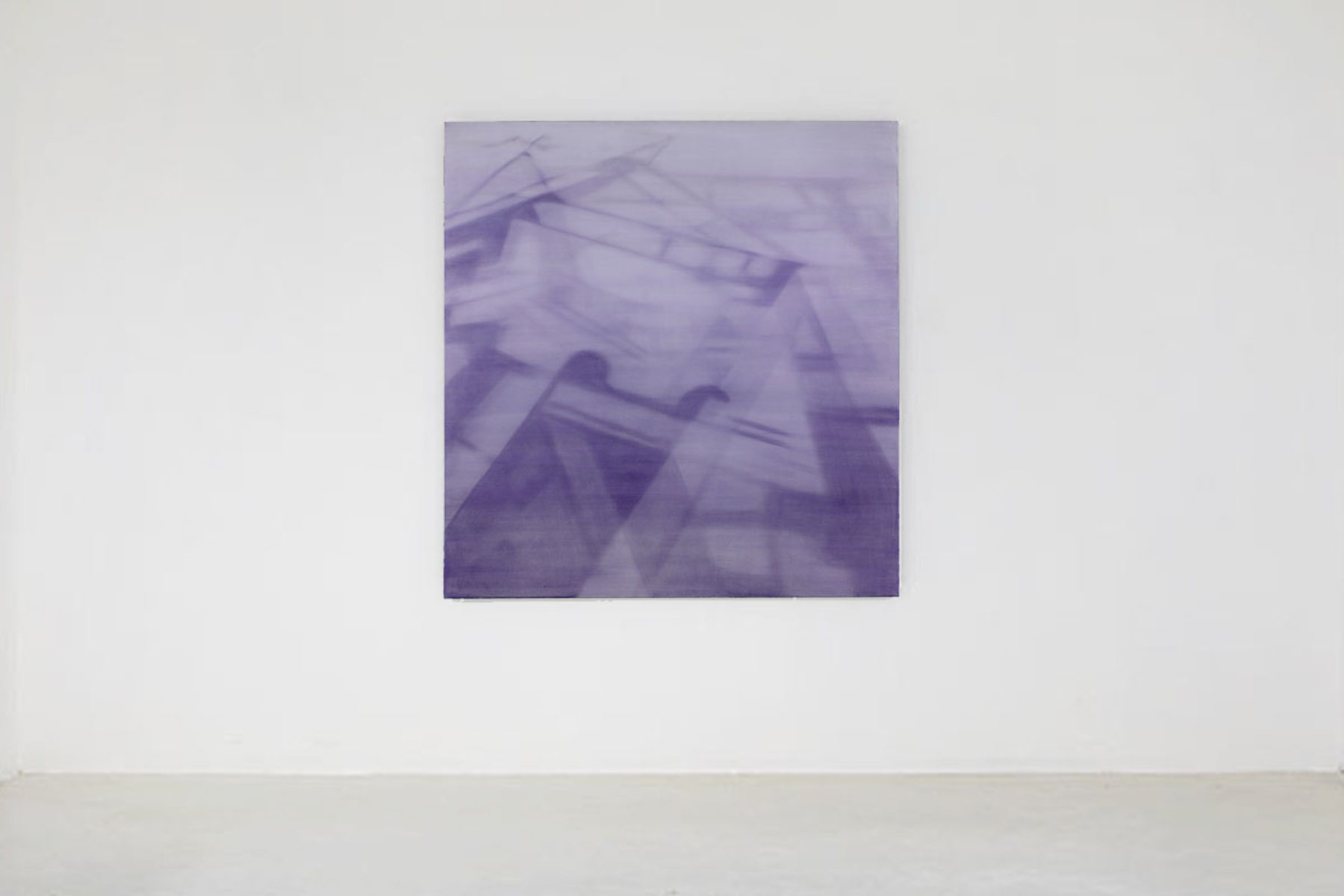 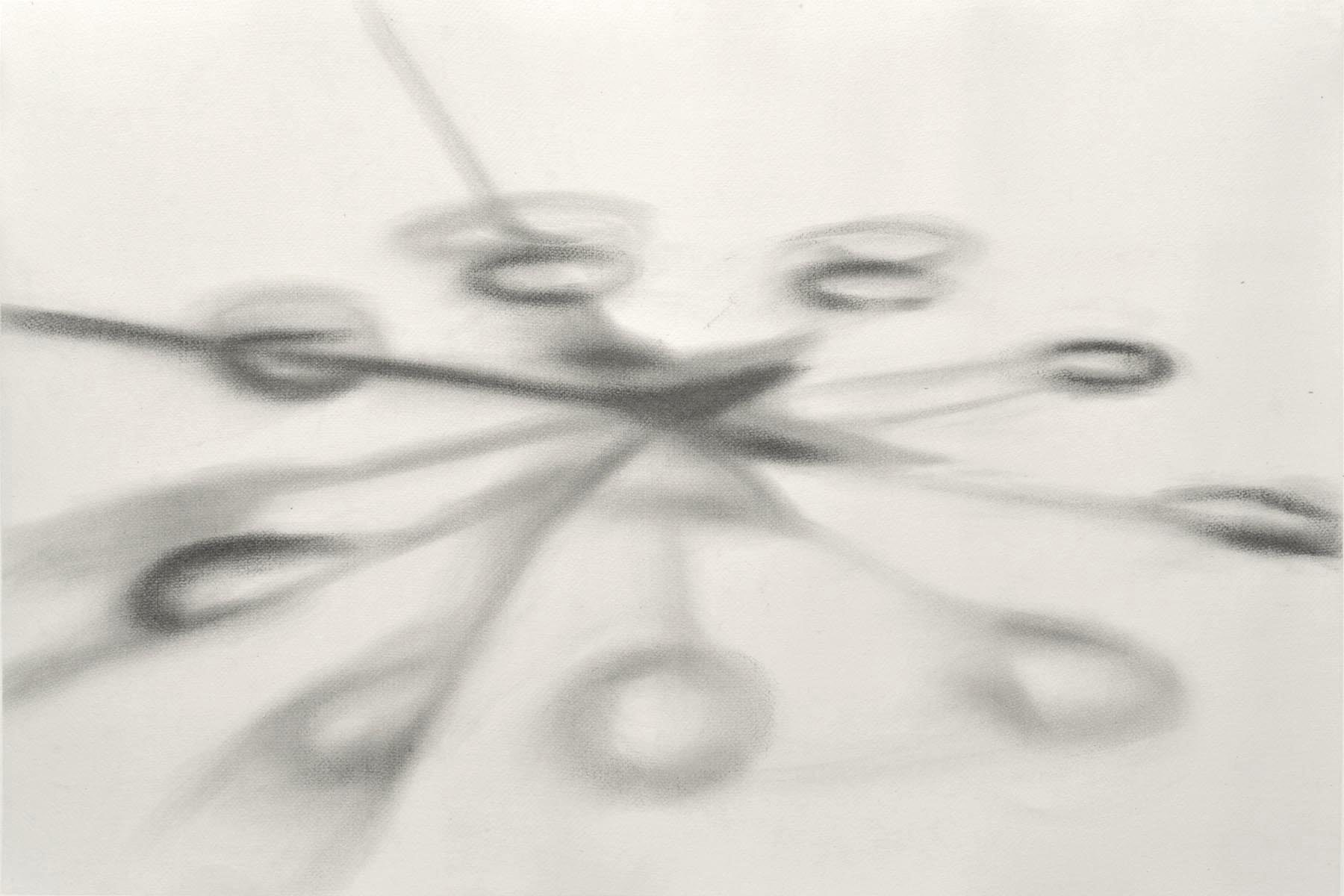 
In our daily experience we perceive the passing of time through atmospheric events, and the shifting of the light that we can constantly see on buildings, trees and on anthropic and natural elements in general. The recent work by Marchetti Lamera explores the physical and chronological manifestation of time, and its concretization in the movement of shadows created by the light of the sun. His practice focuses on the use of a two-dimensional pictorial image to document and record the shadow that an object projects onto other surfaces. The image he creates, condensed on canvas or paper, oscillates between being the result of the experience of linear time – a time that is already in the past, fleeting and elusive – and the prediction of anticipated cyclical time – that is, a circumstance that is already destined to be announced, and therefore foreseen.
Our civilization has always been torn between two antithetical concepts of time, based on opposing ideas of circularity and linearity. Time is circular when the events and conditions that determined them periodically recur, in the same way that the seasons follow one another and the planets move within our solar system. In the words of Nietzsche: “The eternal hourglass of existence is turned upside down again and again”.[1] On the other hand, time is linear when there is only one direction of travel: a continuous succession of events in a chronologically successive and unrepeatable form. This is the way time is considered in the Judeo-Christian tradition, in which the world was created and in the future it will be destroyed (as predicted for example by St. John in the Apocalypse).
Each of these conceptions, whose implications may at times overlap, tends to highlight different aspects of time, either focussing on the periodic and liberating nature of repetition or else on the malevolent fleetingness of moments and situations that can no longer present themselves as such. The research into shadows undertaken by Antonio Marchetti Lamera in recent years seems to symmetrically touch both conceptions of time, highlighting the aspects of delicacy, intimacy and sometimes of a subtle existential melancholy.

The subject of the cast shadow chosen by the artist refers to the cyclical aspects of lighting conditions, which appear to be almost identical during short intervals on the same day or over a period of twenty-four hours, as long as the meteorological conditions remain the same. Although by its very nature sunlight is always changing, in the reality we observe it actually functions as an interstitial element between the object and the shadow it creates. Furthermore, it is able to align our perceptions, without actually making it possible for us to grasp the phenomena of instant transformation (as long as there are no changes in weather conditions), in a sort of metaphysical suspension.
But the cast shadow, and its slow changes, are indicative of the passing and unfolding of time, intrinsic to a linear conception. This is something we perceive in our daily experience, based on the habit of measuring time. We perceive the continuous unfolding and the unstoppable flow, and we are aware of the infinite transience and of how it is not possible, as Heraclitus warned us, “You cannot step twice into the same river”.[2] Or, by analogy, to see the same shadow twice. All the more so because, paradoxically, we ourselves have partly changed in the meantime: the linear condition implies a constant change, even of the subject who is doing the perceiving. Opposing this change seems impossible for us as humans.

The artist’s work is very similar to photography as a recording method, not so much for its origin as an image captured and stored, but rather for the dynamics of sampling that are inherent to the process. The final image is truly the effect of a sampling of time, a testimony to a past condition, which is at the same time the trace of a presence that has taken place, but which could occur in a similar form, should the same conditions happen (meteorological and the position of the sun). This sampling therefore has multiple possibilities of interpretation, depending on whether we favour the aspects of uniqueness, or we prefer those of repetitiveness: it is at the same time time experienced and time anticipated.

A cast shadow, which is intrinsically unstable and impalpable, is difficult to classify as a true and autonomous subject from an iconographic point of view, since it is only the effect – the evidence – of something that has existed elsewhere. That is to say, the cast shadow shows that objects and artefacts exist, that they extend in space and have a volume whose presence determines areas with less illumination than those where light arrives directly. It is a sort of documentation, a conceptual device, common to all subjects without distinction, that guarantees that something exists, even though it does not possess the standard requirements of a subject.
The ordinary classification that divides between figurative images and aniconic images is completely meaningless in this case. The one chosen by the artist is, to all intents and purposes, an anti-subject – that is, an unaware, hidden and elusive subject. It is like the seed of an unknown plant that the wind has blown into our hands by chance, and that we plant in the ground without knowing which plant it comes from. In this continuous attempt to show that which is a transitory projection (the shadow) completely concealing that which exists (the object that produces it), Marchetti Lamera’s work gives the greatest scope for art to generate visual content by reworking in a subversive way the phenomenological stimuli that come from reality.
The shadows are deprived of any relationship with the primary elements that generated them – such as pylons, trees, or urban and industrial architecture. As such, they become like morphemes that the artist employs and recombines according to his own compositional needs. The results are like haikus, short poetic compositions consisting of a few verses and a tone similar to Hermetic poetry, which condense complexity into a few words. The borderline between the dark shapes and the context are blurred, although elaborate shapes can be seen, made with graphite or colour. The atmosphere is impalpable and suspended, permeated by a melancholy yearning: it is as if his images were maps of places that were once vibrant, but that now no longer exist. Places of which only a faint memory remained in the white-haired head of a geographer about to submit to old age.

Drawing is at the heart of all of Marchetti Lamera’s artistic practice. Not just because of the exploratory aspects of this discipline, but because it is the central medium for elaborating and synthesizing images starting from the endless photographic archive that the artist has collected. Furthermore, it is physically the basis for every piece of work, even on canvas After the usual preparations, the artist first creates a graphite drawing on the surface and only later does he apply colour. The memory of the cast shadow in his painting-drawing, which chronologically occurred in the past, therefore returns not only as a conceptual evocation, but also as an inescapable material foundation. Every one of his works is a drawing, or has been briefly. In the latter case, various layers of colour have then been applied to it in order to multiply and amplify the effects of the light that hits the work. The painting created by the artist is characterized by the use of fields with minimal chromatic variations and by an extreme fluidity of the lines. In this way it also preserves a trace of the memory of the medium that physically preceded it, hinting and alluding to it. Conceptual and technical issues thus go hand in hand, in a kind of continuity that is particularly meaningful.

The images created by the artist gather the writing made by light, fixing it in a static form, and are endowed with a rather mystical and contemplative aura. The visual alphabet used is minimal, the forms used are simple and essential. And yet in that real and unassuming simplicity, it is as if the pomposity and the noise of so much bombastic amazement had faded. It seems, almost, as if there is no room for anything else, as if what was transitory had really transited, and what remains is that which is really worth holding on to and preserving. Thus both depiction and reality cease to exist, dissolving in the shapeless fluidity of the shadows, like snow melting in the sun. Time seems to have shed the urge to advance and sustain change. The light becomes diluted into lines and reflections, into raggi ombrosi (“rays of shadow”), [3] a contradiction that softens, becoming still and quiet.
The only moving thing seems to be the observer, who, with a tilt of the head, moves sideways a little at a time to perceive the differences in the shimmering of light and the reflections of the pigments spread across the surface. A little to the right, a little to the left, moving slightly back so as not to be dazzled by the sunlight reflecting off a shadow, which the sun itself had produced. The light feels no obligation not to contradict itself, and can blind the eyes if it reflects the small darkness it has created on a smooth surface. The viewer turns their eyes, “sees a shadow rise in the distance, grow, approach, change form and colour, fold over itself, break, vanish and flow again. […] You cannot observe a shadow without bearing in mind the complex features that concur in shaping it and the other equally complex ones that the shadow itself originates. These aspects vary constantly, so each shadow is different from another shadow, but it is also true that each shadow is also the same as each other shadow, even if not immediately adjacent or successive”.[4].


[1] Friedrich Nietzsche, from Nietzsche’s The Gay Science, s.341, Walter Kaufmann transl. New York: Vintage Books, 1974.
[2] Heraclitus, fragment DK 22 B 91, from Fragments by Heraclitus, translated by John Burnet in Early Greek Philosophy, Adam and Charles Black, London 1908.
[3] The expression raggi ombrosi, an oxymoron, is taken from the title of a series of works on paper by the artist created in 2019.
[4] The last lines of the text are a transcription of a passage from the first chapter of Mr. Palomar, written by Italo Calvino (Turin: Einaudi, 1983; English first edition San Diego: Harcourt Brace Jovanovich, 1985), where I have replaced the word “wave” (onda) with “shadow” (ombra). It is a poetic re-adaptation and I hope the reader does not find it to be sacrilegious of a perfect, and in some ways sacred, text. I apologize to the reader and to the great Italo Calvino.