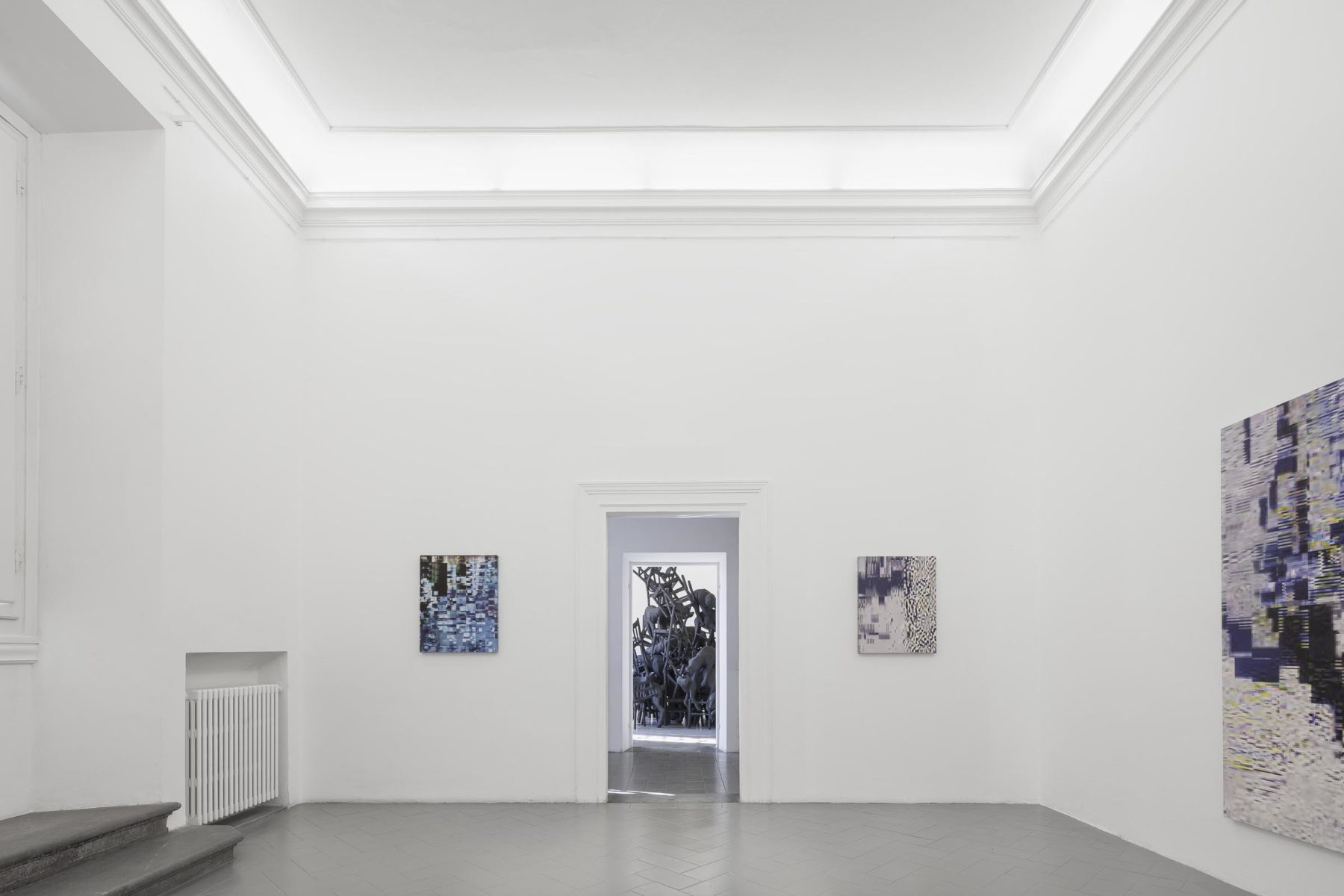 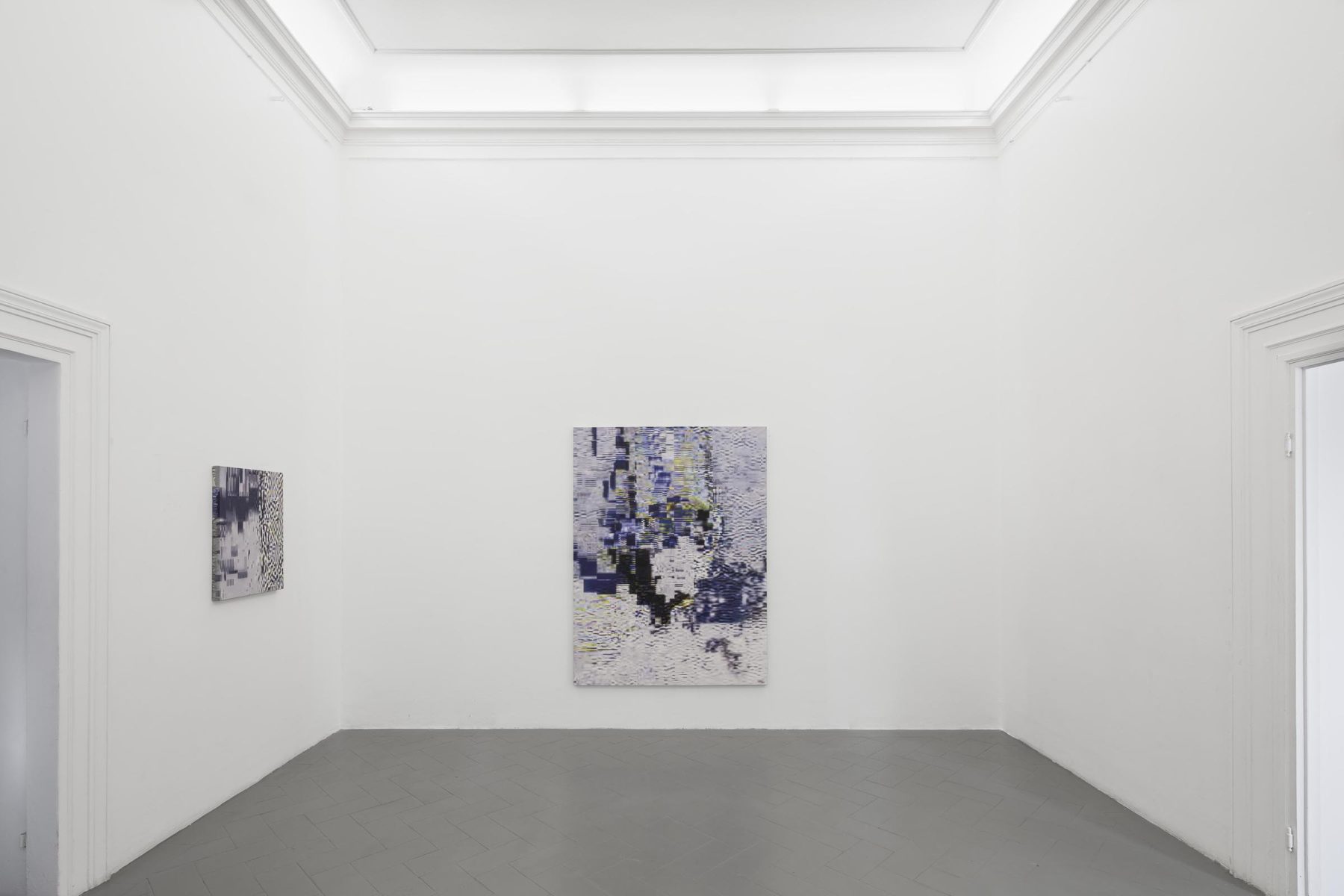 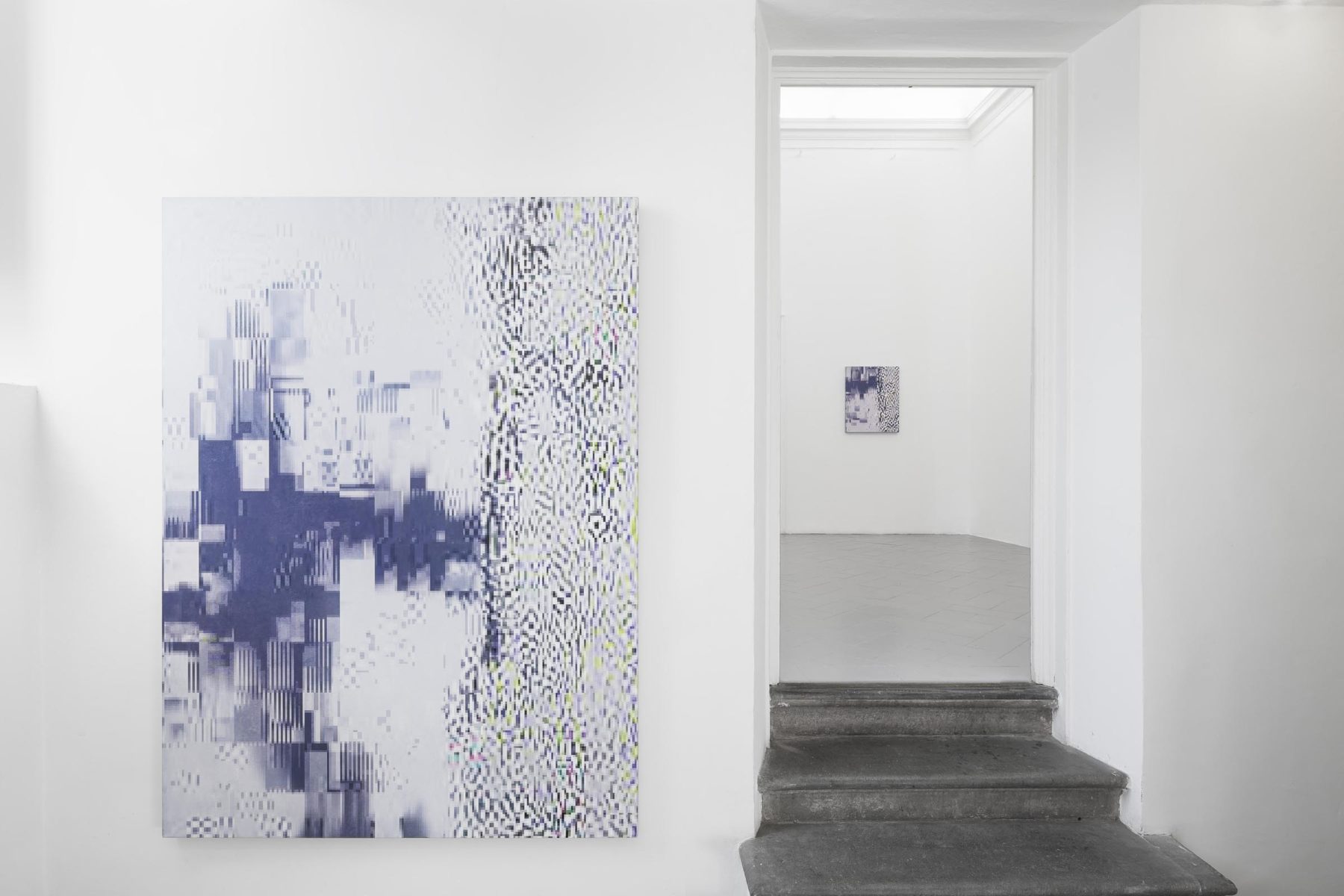 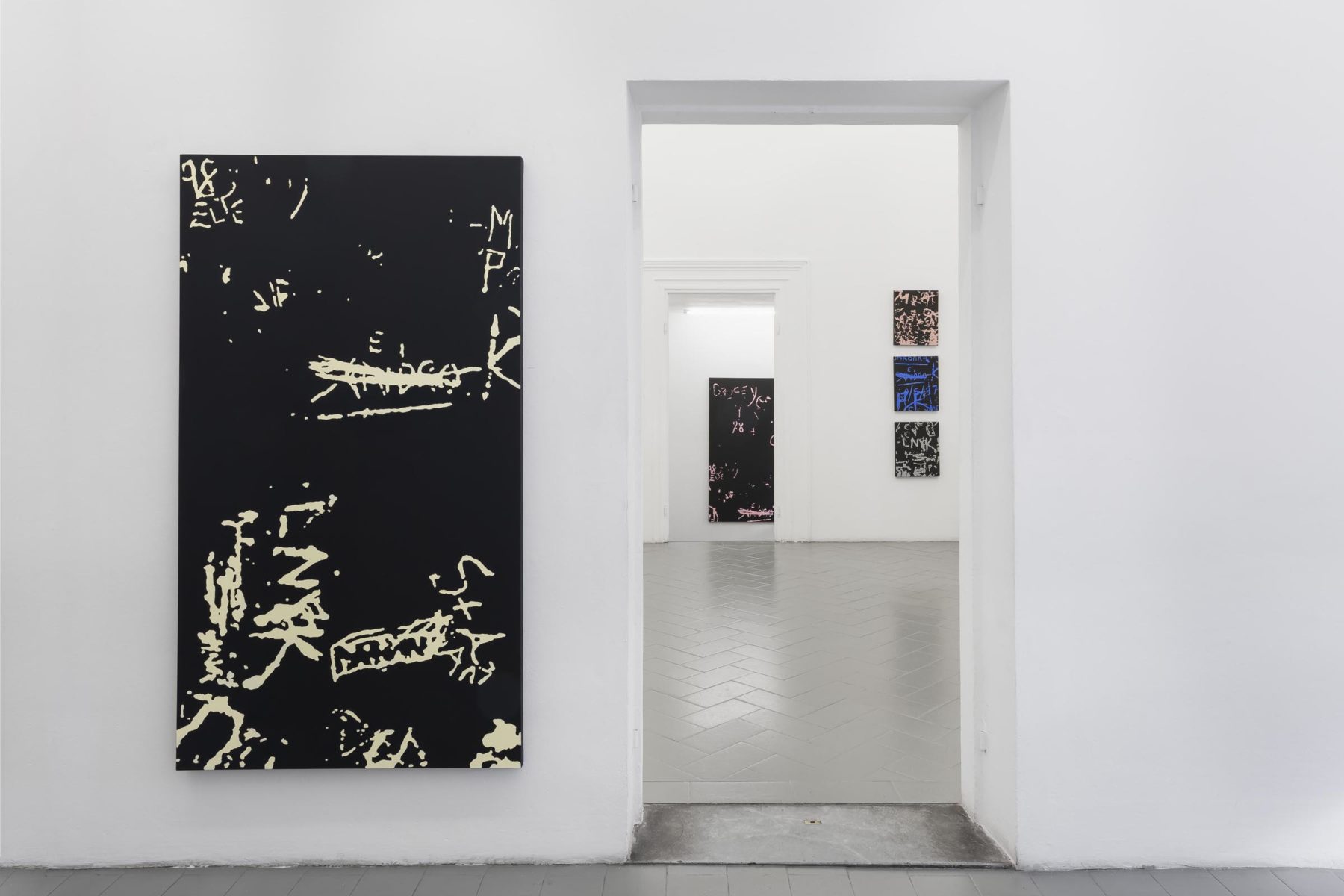 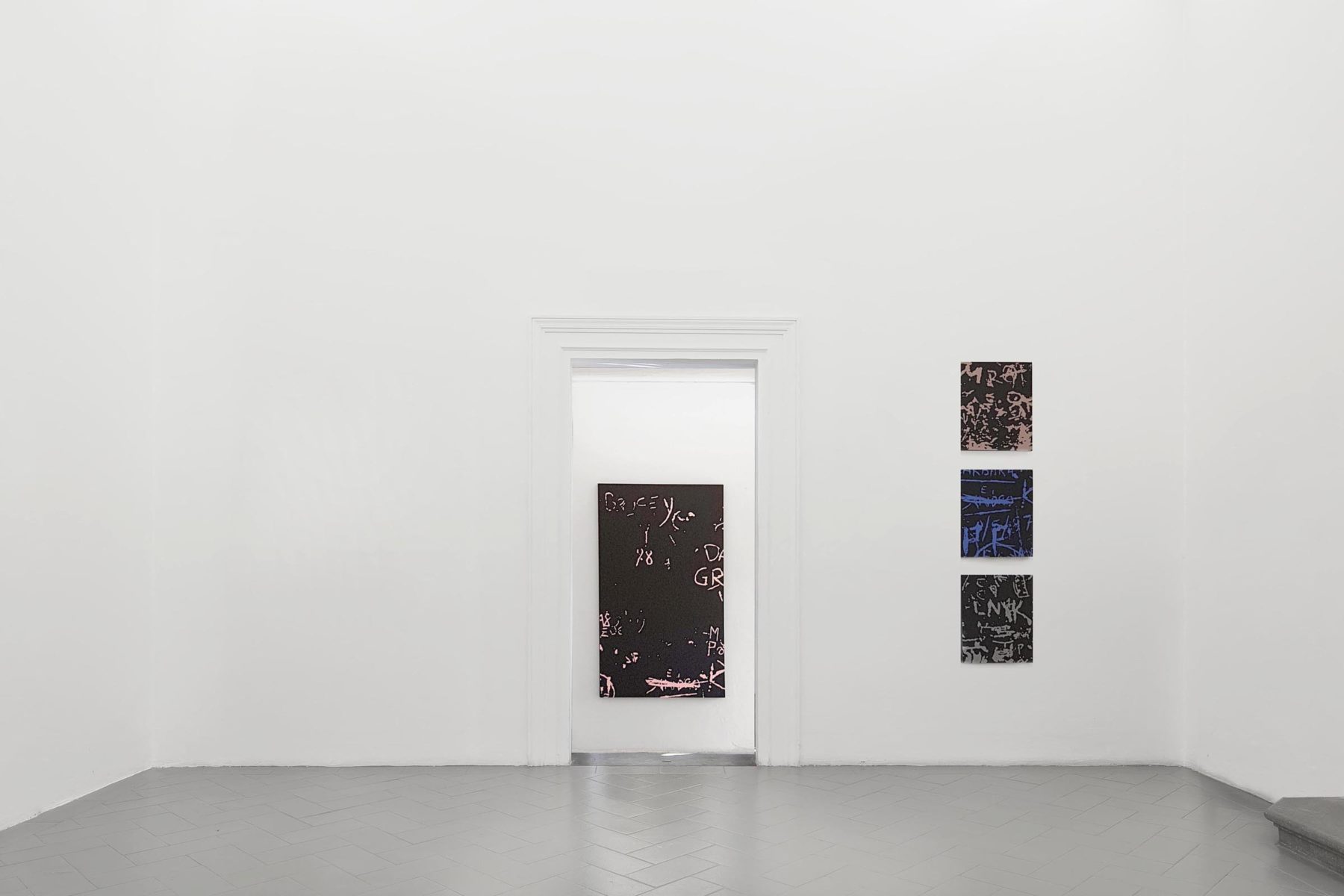 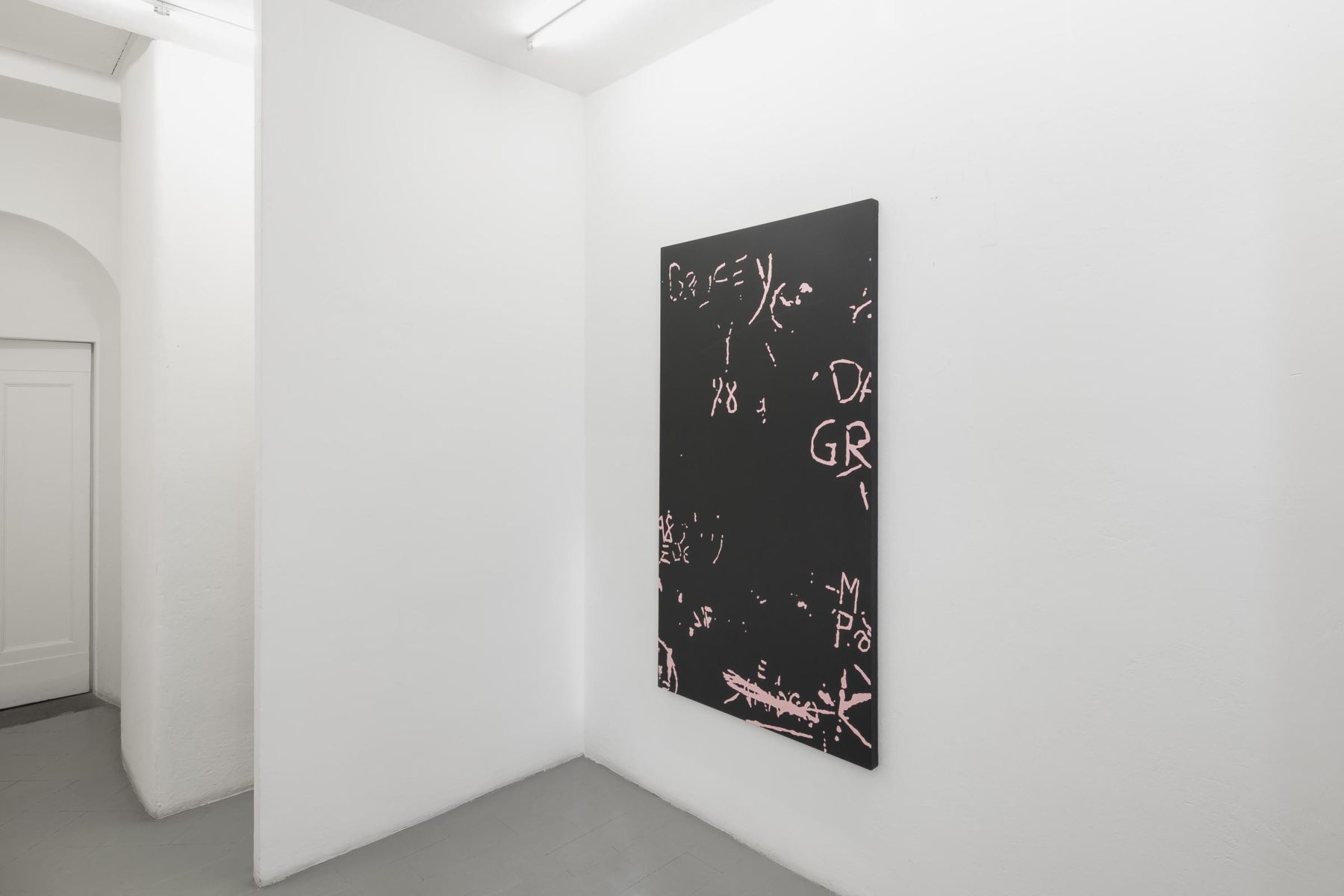 Beneath the Surface tackles the issues concerning the image, from its creation to its distinctiveness, as well as the dynamics of its transmission and the concrete integration within a support. More specifically, through painting, the works by the two authors question the expressive possibilities that emerge from the interactions implicated by environmental contexts and the media. In such a process, the observation and the causality of both the stimulus and of interactions gains vital importance; a state in which we’re not drawn to understand the differences between high and low registry, between personal and universal, between intelligible content and hermetic form. The exhibit’s works document how the artwork – an image in itself – is the final and distilled form of the infinite possibilities that appear during a constant process of selection, rejection and metamorphosis.

The works on canvas by Pedro Matos portray several blown-up images of incisions, casually noticed on walls, wooden doors, school desks and trees. These marks, at times barely comprehensible, are normally seen and then instantaneously forgotten due to their lack of visual syntax and real contents of interest: they’re scraps, relics left by someone before us. Matos incorporates these visual clusters on the surface, using these marks to create a painting that apparently lacks both a subject and syntax, and is characterized by a sense of metaphysical suspension.

The works by Konrad Wyrebek originate from the artist’s interest towards the error that occurs during the transmission of electronic images and when employing the necessary compression algorithms. The artist collects photograms, which present defects within the visual stream, and then elaborates and transforms them into a subject. However, this subject is conceptual, and is layered on canvas in the geometric form of abstraction, where we can recognize matrices, reiterated portions of colors and pixels. Therefore, the final image depicted on the canvas is the result of a slow, pictorial stratification process, in part casual and in part conducted by the artist, and leads the audience to observe, question and get lost.

Your artistic practice is reduced exclusively to painting. You focus on small details, sometimes quite invisible elements of our lives we usually don’t care about. You bring them to our attention on the canvas. Why are you so interested in this “micro” reality? How do you choose these elements?

I like to make works that are somehow ambiguous and have multiple layers of meaning. It has something to do with finding beauty in the unconventional places, about bringing it into the language of painting and in the context of the contemporary art world, about acceptance, tolerance, stillness and so on. It can mean different things to different people.

The works of the show are based on carvings we can see on school tables, benches, walls, wood. They are a sort of unconscious texts or jokes, a sort of sample of reality, but they don’t have any particular beauty and they are far to be considered interesting. But you are seduced by them, or at least you can felt the hidden power they have. Later you transform them in a something new, a kind of metaphysical statements or abstract drawings the spectator can discover. Do you think they have any connection with poetry or the idea of wondering?

I agree, and I think we can look at them in multiple ways. Up close, you have the macro level, where you see an individual word, symbol or sentence as names, love messages, dates, curse words, drawings… They are not particularly interesting in themselves, except for the fact that these gestures of mark making have been common in all of human cultures for thousands of years. From the ancient Egypt until contemporary urban graffiti: there is a desire to make our names or our lives eternal. On a macro level, all of these marks and their own deterioration create a semi-abstract composition, that has a poetical feeling and is somehow more than just the sum of all parts.

We are accustomed to define pictures as figurative or not-figurative (abstract) on the basis of the correspondences of the image with some elements of the so-called reality. Are you interested in reality or any kind of representation or you focused just on the precess? How do you define you artist practise?

I am interested in both, and I like to experiment their frontier. I like to make some works clear of what is represented, and some others more vague, either by really simplifying the source image, or by making a really zoomed close up. It happens to end up with compositions that are very distant from how we tend to look and categorize the world, and they become “abstract” to the viewers perception, even though every single work has one or multiple sources in the physical world.

Usually a large work is expected to be seen from distance, a small one from a closer point of view. A part from the dimensions, they suggest different approaches to the spectator. Often your artworks are often big or small, but not mid size, as you need to paint only in the extreme dimensions. Is this just an opinion of mine, or do you like to use only those different sizes?

It is true. I like the qualities in both small paintings (as they are more intimate and they suggest a personal view) and big ones with power and presence. Medium sized works are something that I do very rarely, as they don’t seem to have any particular quality in that dimension except for the fact that they are more commercially viable, maybe. But that size looks very decorative to me.

I think that your painting is a sort of visual escape from the messy word we live in. Flat colours, few layers of elements, small density of patterns: they can be a mental place to rest. What do you see when you closed the eyes?

Yes, there is some spirituality in the process, about reducing things to essence, to a minimal and peaceful place. At the end of the day I see with my eyes, closed or opened, something like a sort of visual meditation maybe. But I am interested in how I see, instead of what.

An error is a starting point
Daniele Capra

Your paintings are based on the random errors and imperfections generated during the process of transmission of electronic images, or deliberately using the compression algorithms of software programs. In both cases, you focus on a particular condition of the image as an incomplete/incorrect message, incapable of transmitting all the expected information the viewer requires. Thanks to painting, you then transform this quasi-image in a full-image. What do you believe an image is?

That’s a good question. I’m not sure what the answer is, but I’m trying to figure it out. It’s definitely complex: it deals with intellect, senses, impressions, and it’s quite hard to contain with language. Maybe that’s part of an answer: it’s a different absolute and independent way of communicating. It carries information, which in a digital age is coded and can be read or assembled in more than one way, depending on the background setting (cultural, historical, social, etc.). As you mention, it also has a margin of error, but I don’t see this as an incorrect message, rather I see it as something more accurate and complete.

The word “error” comes from the Latin verb “errare”, which means “wander”, “stray” or “mistake”, and it can give the idea of an opportunity you can discover only by deviating from your comfort zone. I believe that your method can be considered to be an error-based research…

I like that definition. I can confirm that it definitely feels like I’m wandering, researching and questioning here…

But the final result (i.e. the painting) is the sum of the starting inputs, plus the sequence of errors you can control – that is a full-image. Are you interested only in the process of transformation, or do you also evaluate the result from an aesthetic point of view?

I evaluate the results aesthetically. It all starts even before the transformation – when I search for certain colours in the source materials that I will use. During this process, which can take from a few weeks to months, I end up with thousands of images. I then look for the colour, composition, shapes, texture, rhythm, etc.. I have to make sure I select something that is both powerful and interesting enough that it will take me over a month to turn it into a painting. The finishing layers are in varnish, visible only at certain angles, but this takes about two additional weeks to apply.

How do you choose your source images? Do you have a procedure, or does it happen by chance? Is the picture important in itself, or is it just a starting point?

First of all, I look for topics that interest me; a topic that I believe matters and is relevant for the times and society we live in. For example, world distribution of news (you can see news readers in my video work installation), climate change, global warming, or, more recently, even the canons of beauty and lifestyle. The subject and source of the starting image are very important for the conceptual layer of my practice; it’s as important as the process itself, and only after that comes aesthetics.

We are accustomed to define pictures as either figurative or non-figurative (abstract) based on the correspondence between the subjects and elements of reality. Your paintings aren’t based on pure representation, but rather the final result is a real image of something that lived for moments in the electronic stream. Even if there are many elements that come from the language of abstraction (such as geometric structure, the use of patterns, etc.), do you consider your paintings to be figurative works? Don’t you think that the process itself can be considered the real subject?

Yes, the process is an important, integral and conceptual layer of my practice. I start with video footage, which is figurative, and select images of something that is relevant for the times and society we live in. The works of this exhibition might seem quite abstract, however they do originate from figurative representations. Often times, I like to leave it up to audience to work it out whatever it is they’re facing – for me, the ability to question is more important than the answer itself.

Due to the development of technology and communication, we live in an era made of a continuous flow of images. Thanks to painting, you are able to slow down the time of an image you captured from reality, and extend its duration. In theory, the image you painted can even last forever. Isn’t this a classical and somewhat contemplative approach to image?

Yes sure, “Exegi monumentum aere perennius” [1], it’s very classical. However, it can also be very romantic, trying to capture something that is highly ephemeral, lasting just a fraction of second on your phone or laptop screen. It can be very cathartic and meditative for the artist, since I spend another month and a half to turn it into a painting. It can be an existential mapping attempt to achieve perfection in imperfection. It’s a circular and experiential process. I think all of those above and many more, and we could have conversation about it for hours going into and out of classical and romantic characteristic. Due to the technology we have access to all the eras and concepts in the same time. We shape this eclectic mass culture like clay and create something original that is unique for the present and the time we live in.