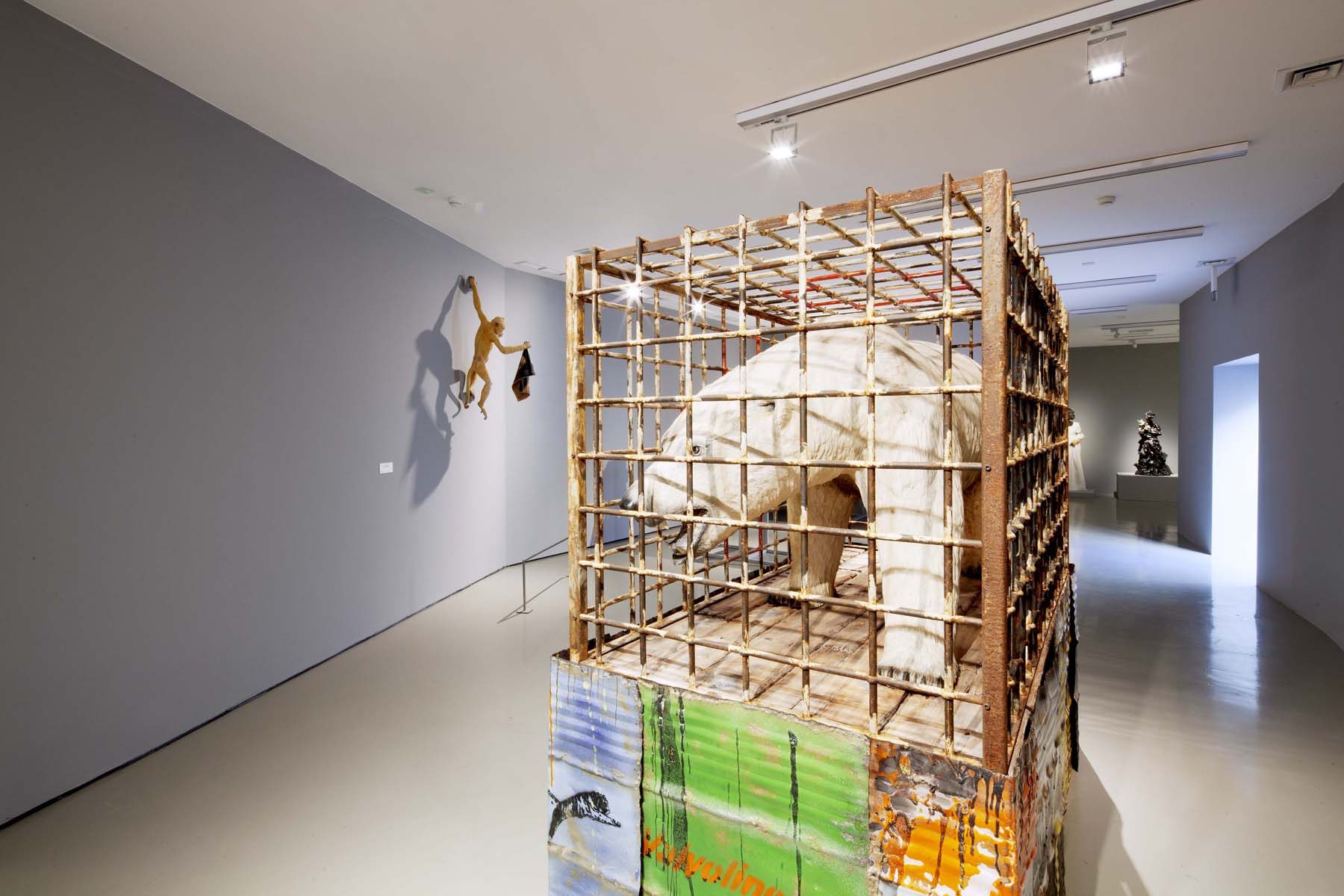 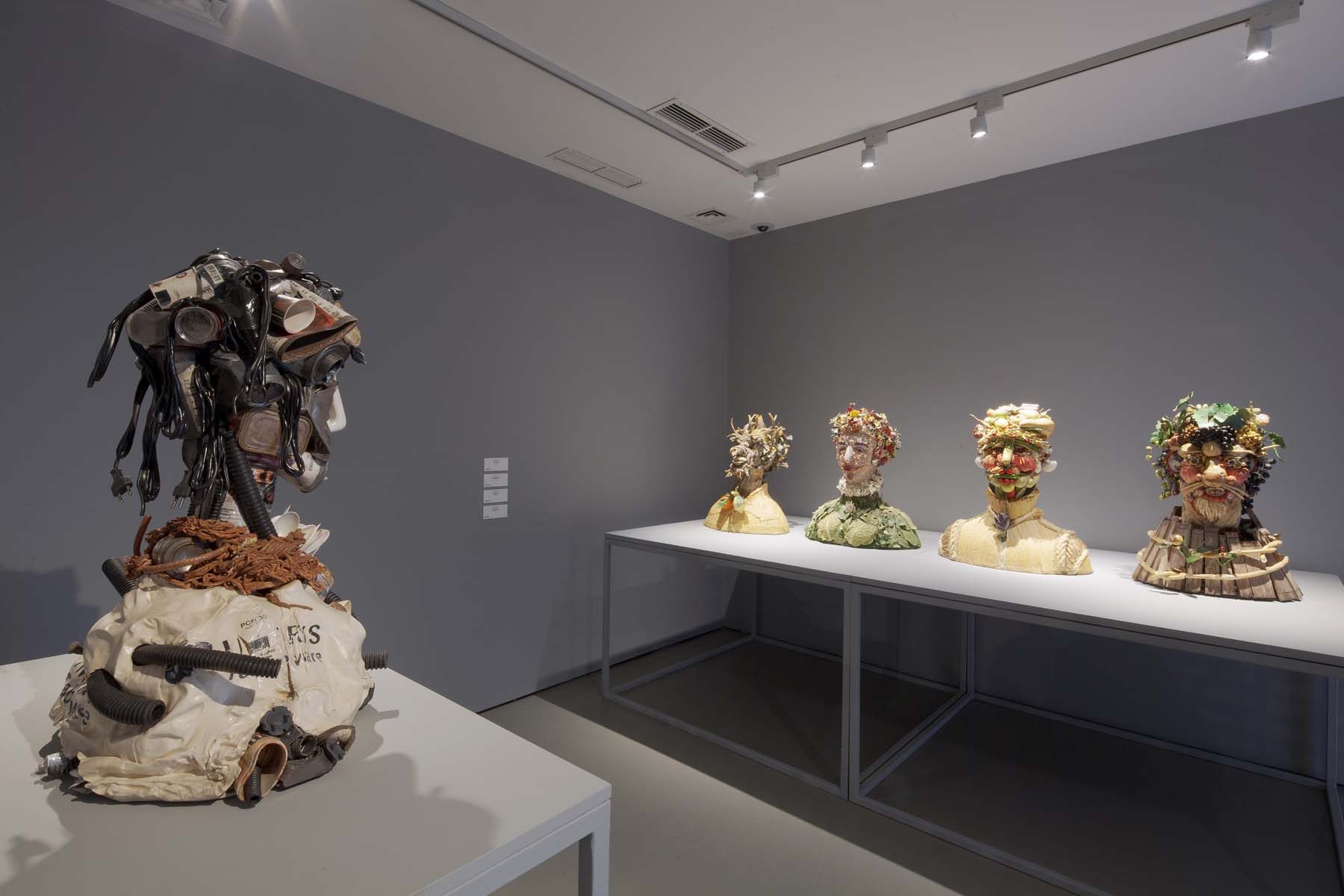 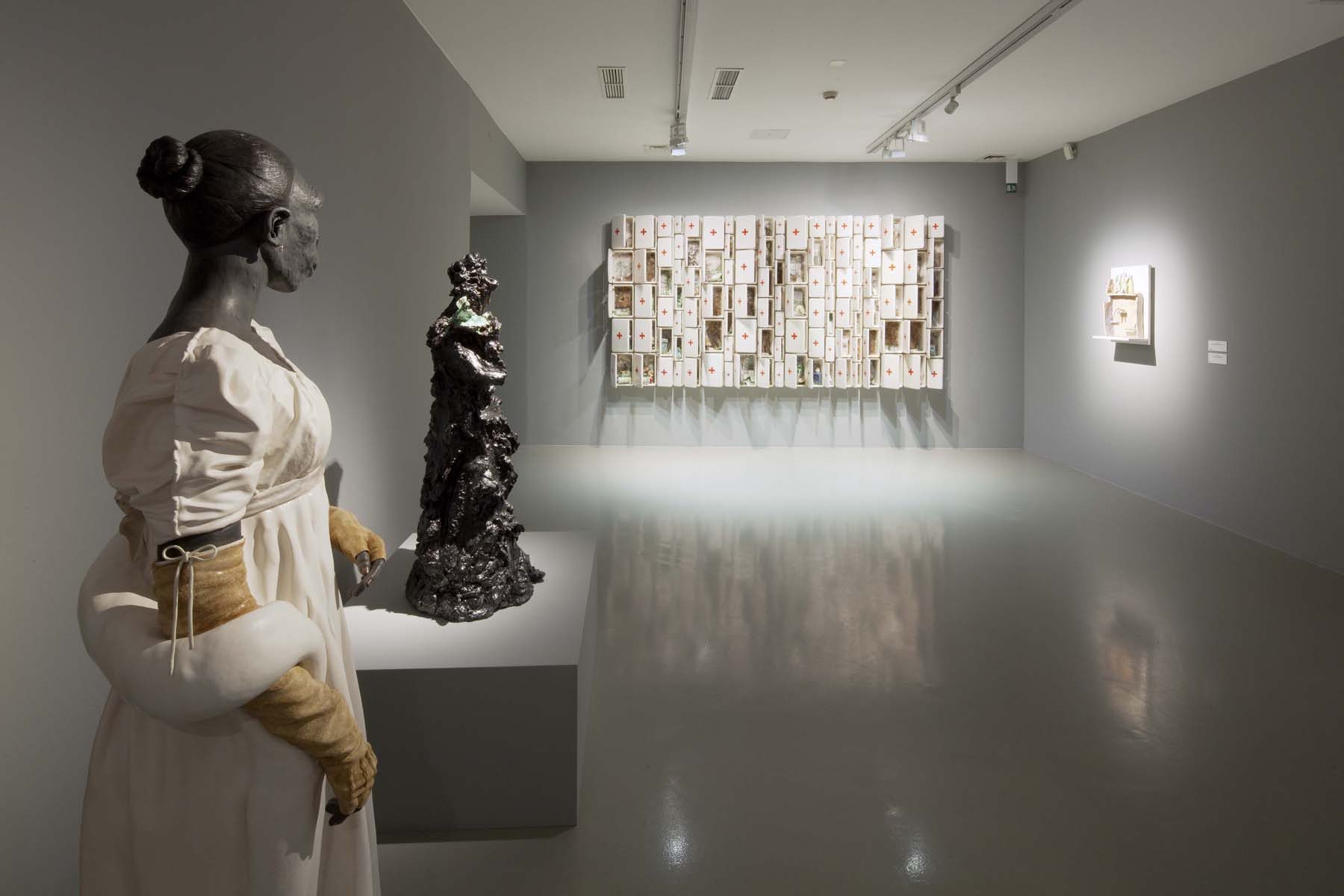 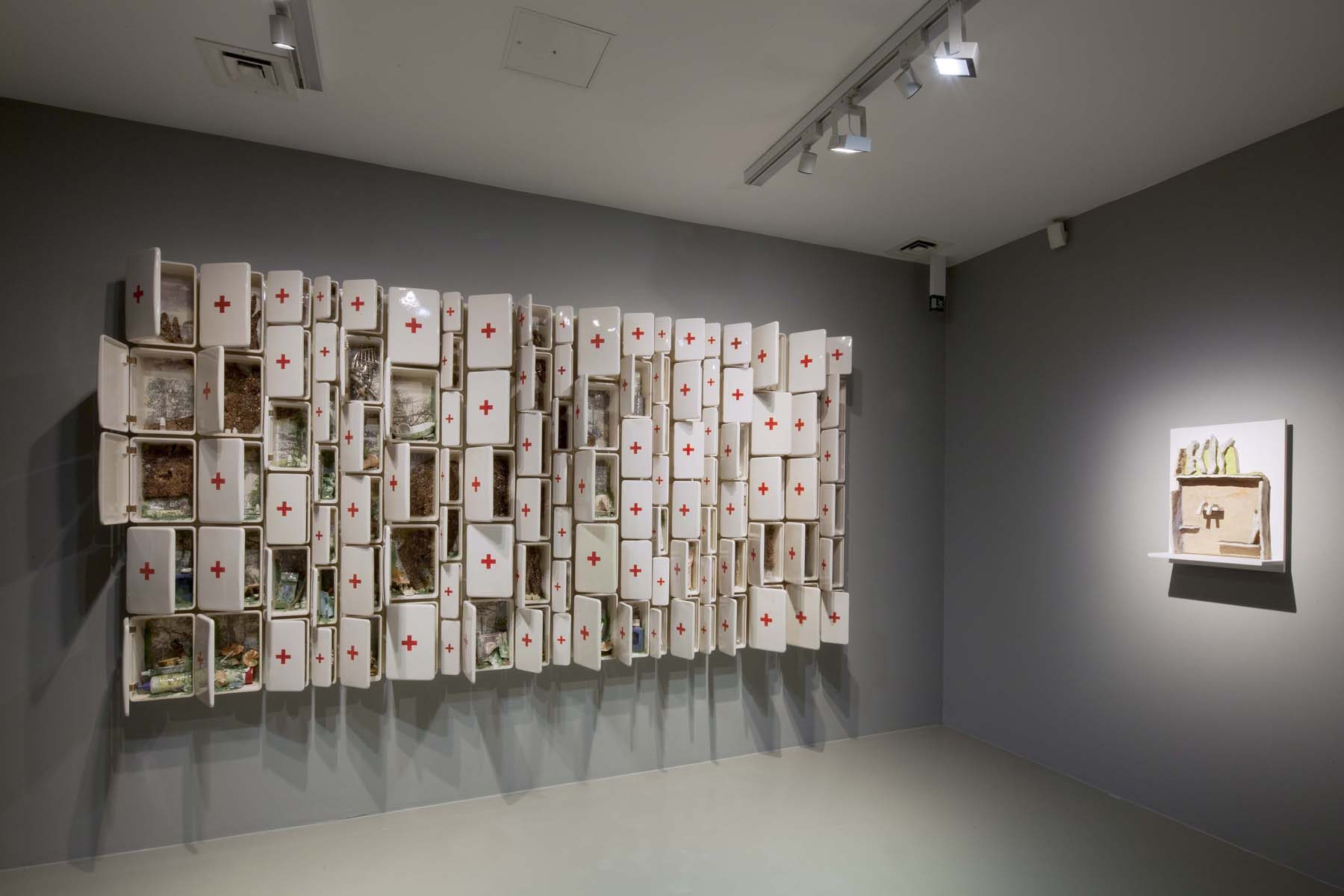 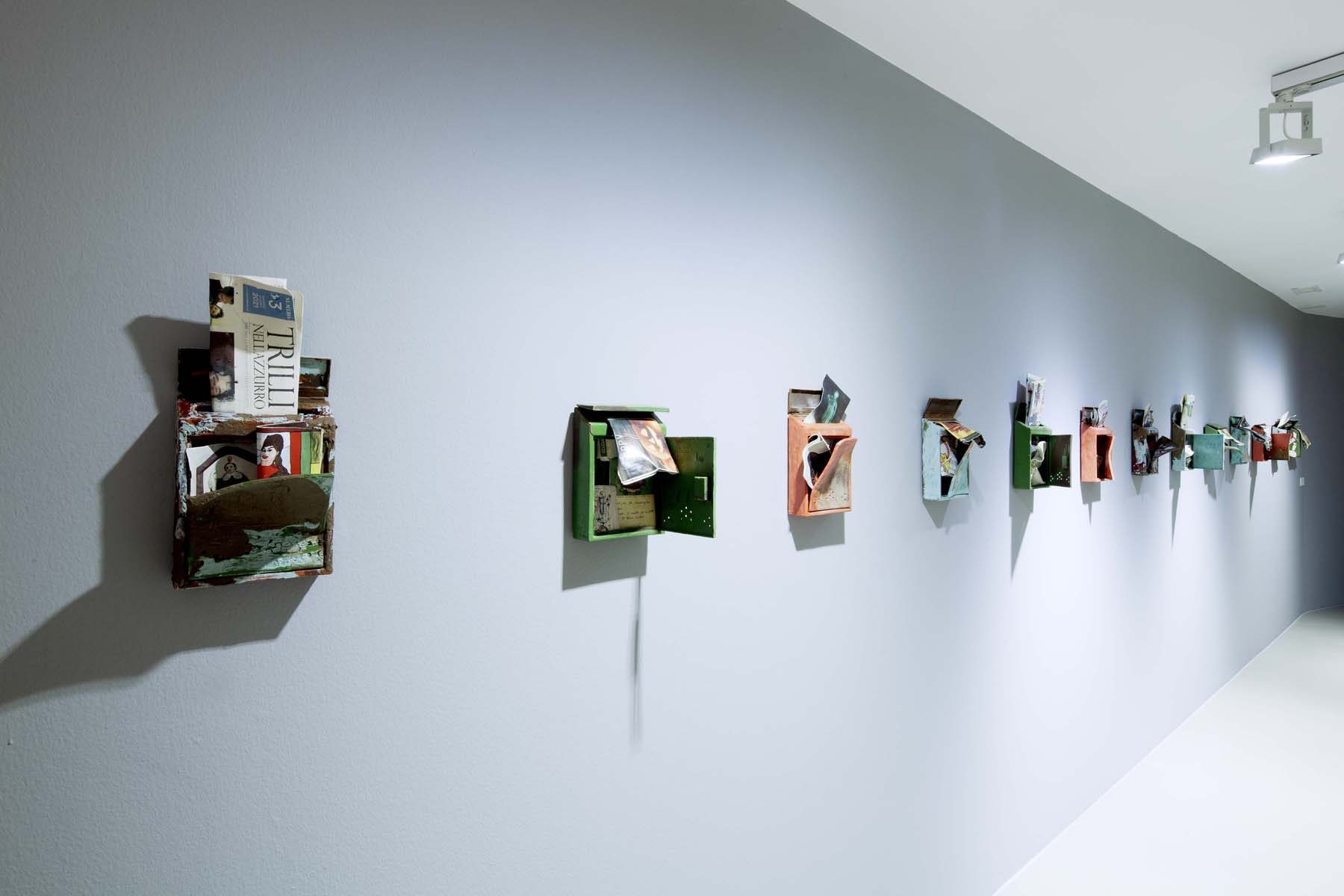 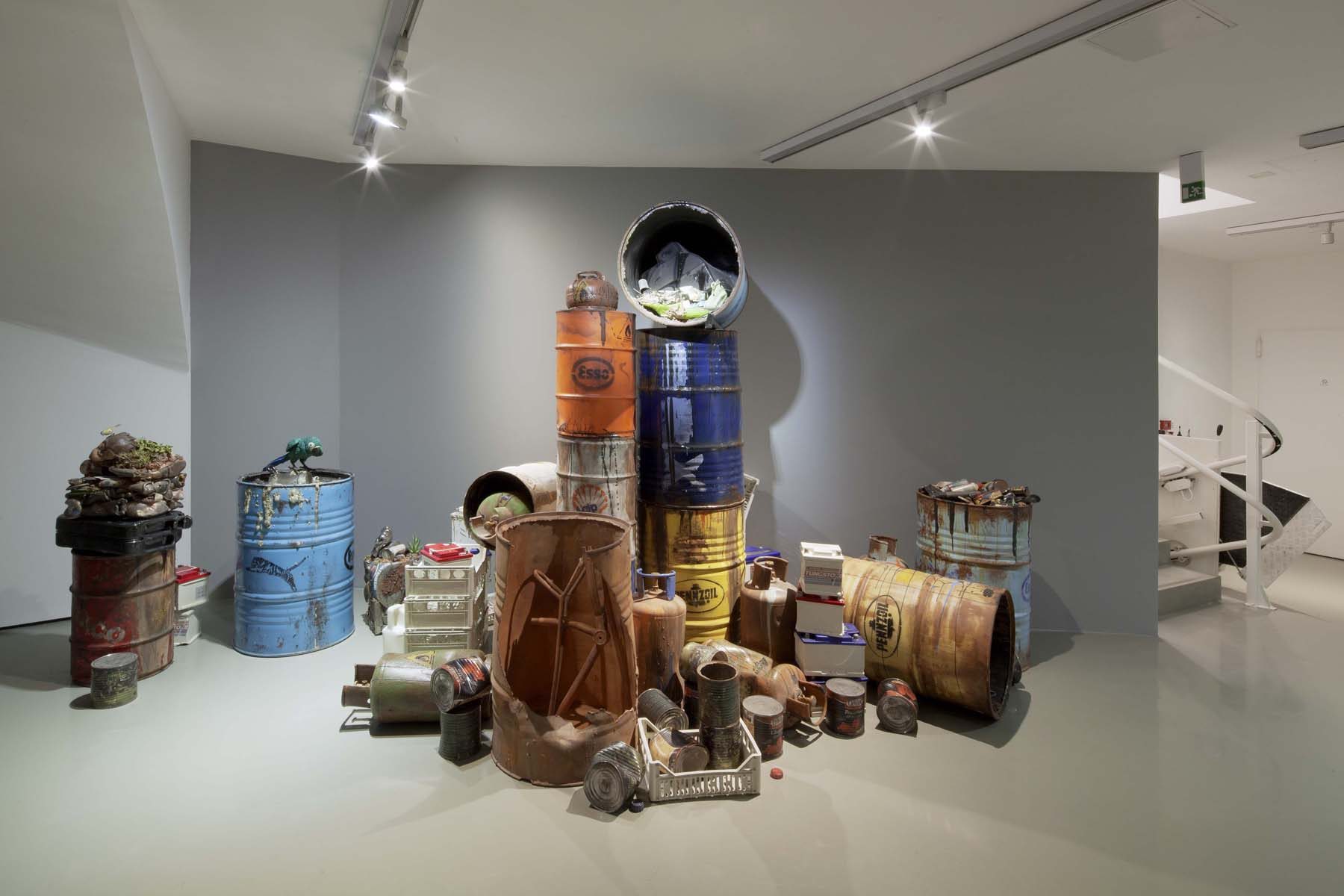 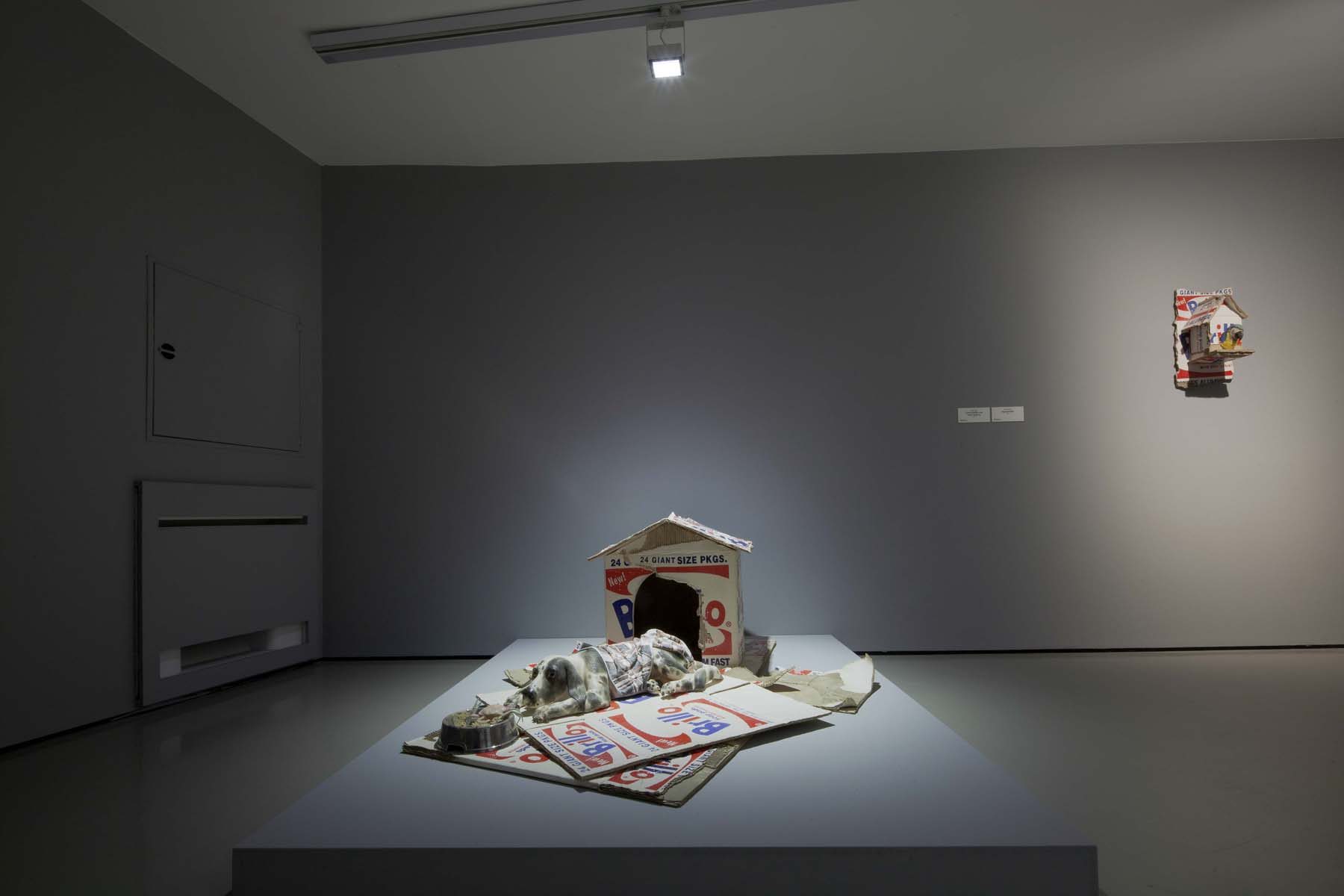 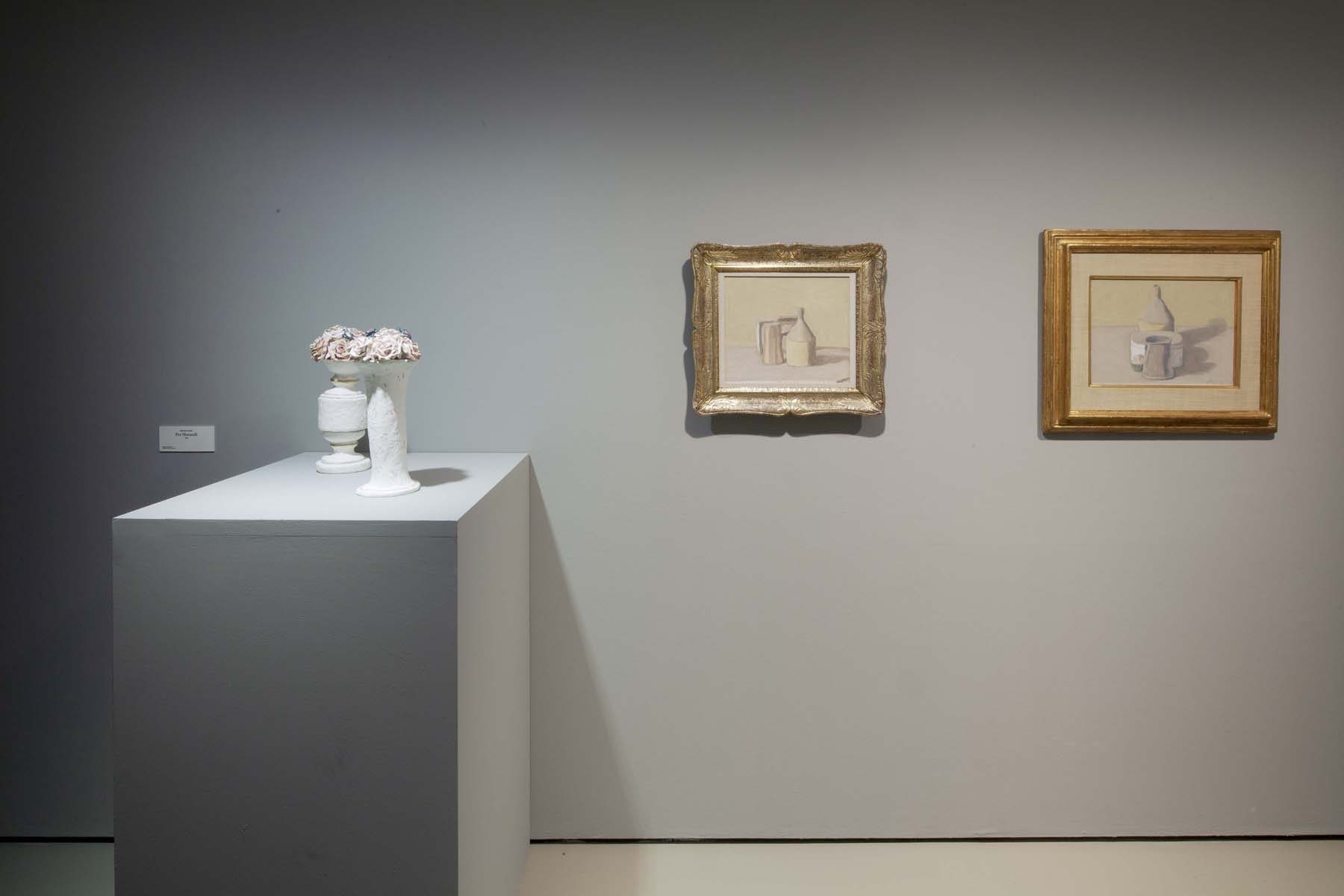 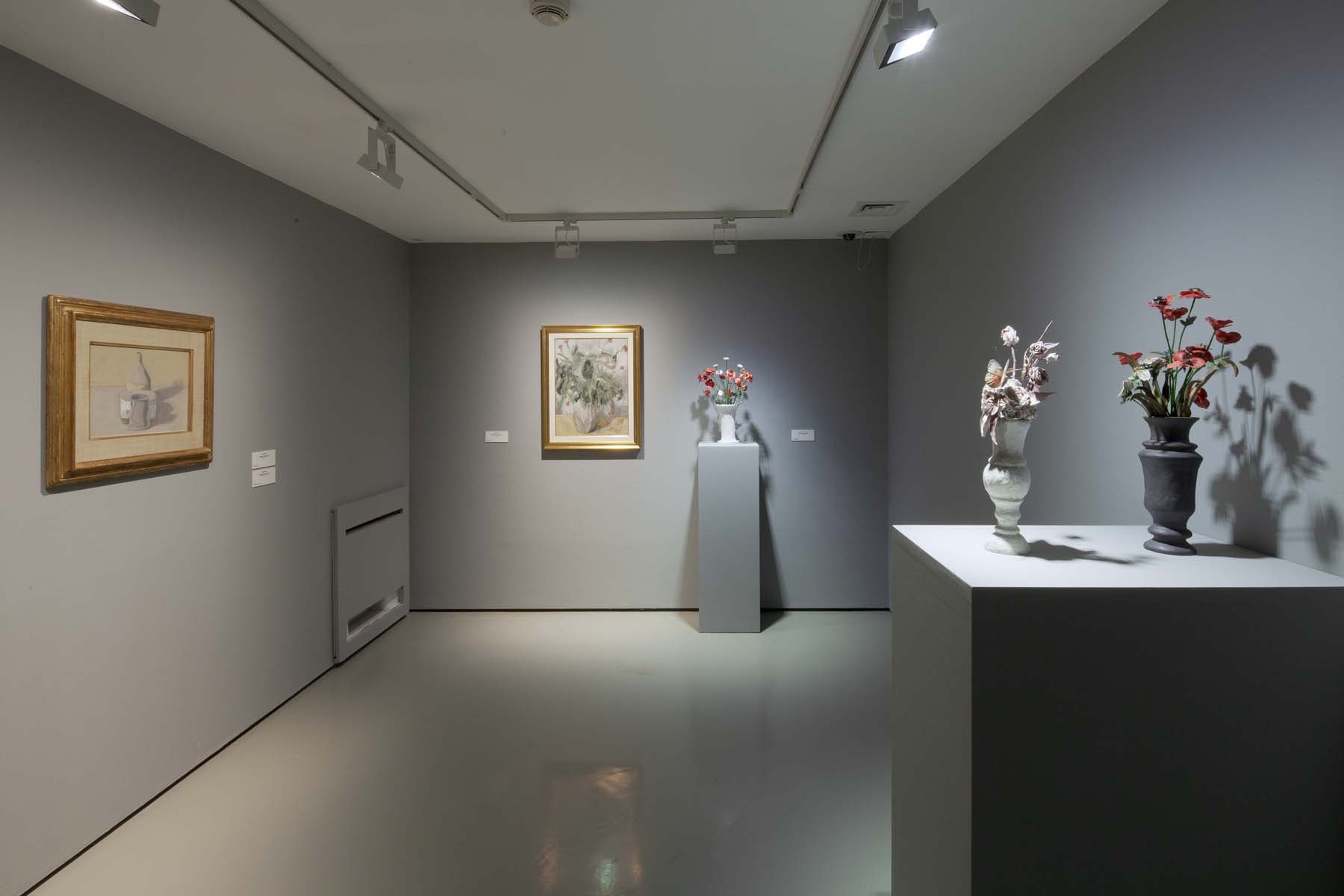 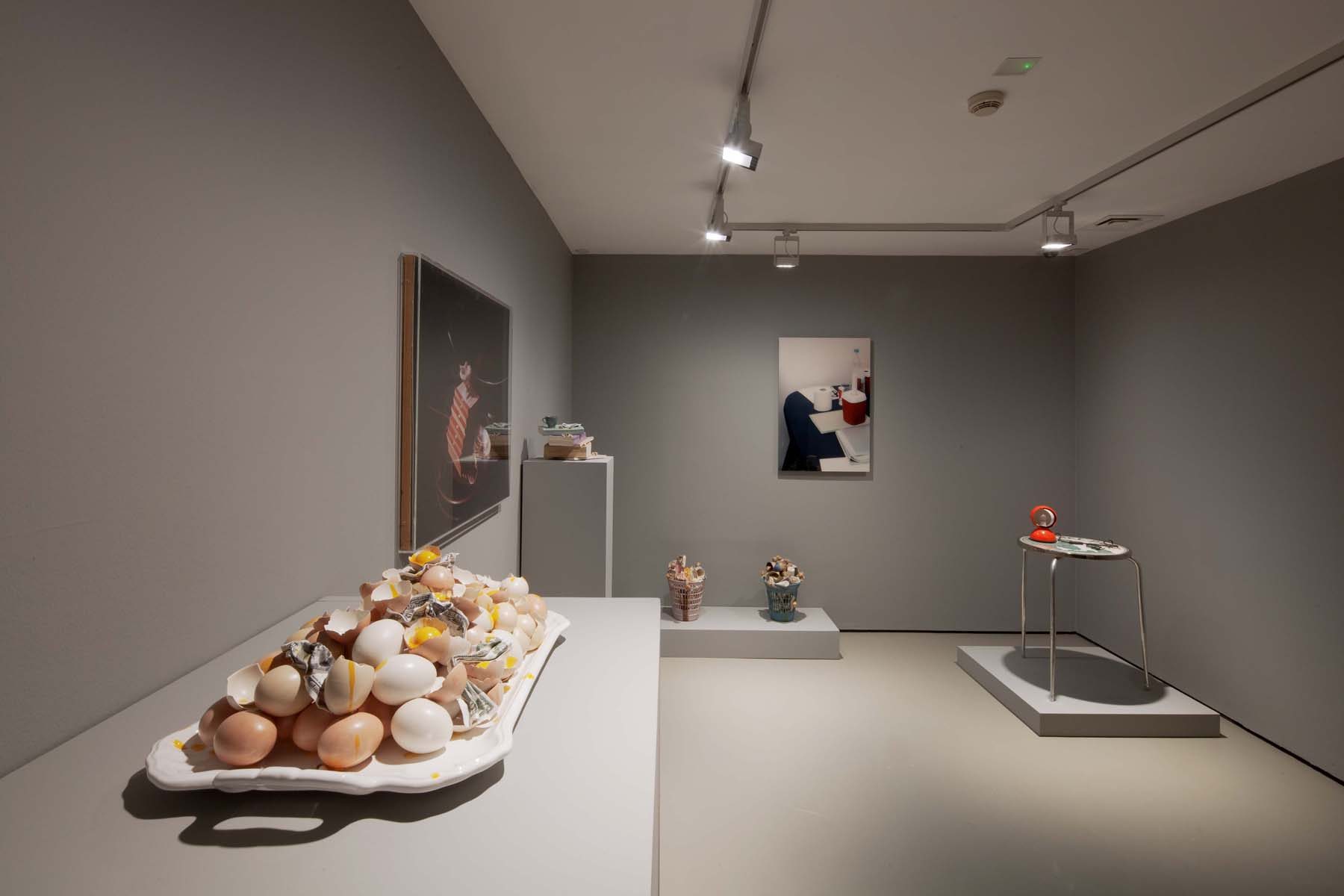 
Making a copy
There are several ways to copy/reproduce a subject placed live in front of us with a mimetic criterion. We can outline it through drawing, that is, by returning it to a horizontal form; we can paint it, outlining it in a vertical position at arm’s length; we can instead mould it, transferring its shape thanks to a plastic material, an approach that inevitably leads us to move in the context and take the measure of its bulk. On the other hand, as Rudolf Arnheim argues, “Each medium prescribes the way in which the features of a model are best rendered”. [1] In classical tradition’s subdivision of the arts, sculpture is in fact the least contemplative; not merely at the moment it is experienced by the observer but in the very dynamics of its creation. We could go so far as to say that, if drawing and painting are the result of careful sedentary observation of a subject, sculpture is instead the outcome of an ambulant interaction: an aspect that indicates, in relation to the context, a different anthropological approach. Whatever the target medium – and the respective strategy to be adopted – mimetically making a copy of a subject inevitably has to do with the way we look at things, with ideology, culture and taste. A copy is, in essence, the outcome of Weltanschauung and the technical knowledge of the individual who carries it out.
Accuracy in rendering volumetric and superficial aspects and formal precision in reproducing the details of the original model provide the observer with the sensation of a realistic transcription, able to connect them to the direct experience of the subject. When a copy is a twin that appears indistinguishable from the source, we are held in check and, automatically, will be forced to seek other criteria of understanding in order to grasp potential differences from the original. In fact, the perfect homology of two elements (except in the case of programmatic sequential production of objects) disturbs us, as it is a nonsensical observation that challenges the uniqueness of our experiences and the principle of the unidirectional flow of time.
Making a copy of something means, at the same time, opposing the inescapability of change; increasing, even in an ephemeral way, the possibility of life for the subject reproduced/led outside its primogenial context. Copying a subject does not entail banal imitation of the world of ideas, as Plato believed in regard who makes copies as “the highest object in life”, [2], an attitude that he negatively attributes to artists first and foremost to “sculptors, painters and musicians, […] reciters, actors, chorus-trainers, and producers”. [3] Creating a copy instead means freeing the subject from its original condition, redeeming it and showing it in an allochthonous and unexpected context. Moreover, as Susan Sontag wrote about photography, the copy gives people “imaginary possession of a past that is unreal” and helps them “take possession of space in which they are insecure”. [4] In this way, the copy let us do contextual and conceptual step, in order to reveals to our eyes a portion of reality that we have yet to deeply analyse or understand, and also strengthens the perception of reality as knowable, measurable and, unconsciously, traceable.

A world out of its mind
The works of Bertozzi & Casoni represent subjects that already exist in reality and are all life-sized. Animals, plants, furnishings and objects are the same size as those we encounter when interacting with the world. Moreover, not only are they perfectly identical to their reference models; even more importantly, they can be confused with these. Represented and representative coincide and are indistinguishable, each endowed with the same precision and quantity of details, much like the vast map of an empire described by Jorge Luis Borges “whose size was that of the Empire, and which coincided point for point with it” [5]in an absurd and surreal way. For example, a dirty dish of leftovers, a dusty plastic box of bottles forgotten in the cellar, a bouquet of flowers or fuel barrel on which a parrot perches are no different from those we already know (even if, materially, they are a ceramic copy). They seem real to us, yet disorient us, all the more so if the place where we see them is a gallery or exhibition space. The educated spectator knows that these places institutionally guarantee the already planned anti-institutionality of the ready-made, since a neutral space, dedicated exclusively to the visual experience, enables the out-of-context placement of an object that in our experience could be encountered elsewhere. The ready-made in the original Duchampian sense should, as Marco Senaldi writes, “serve as a test of our ability to escape the traps of perception […] and teach us to apply at least visual effective scepticism on every occasion and before every object”. [6] From this perspective, a new ideal category could arguably be applied to define the works of Bertozzi & Casoni, that are characterised by a sort of realist vertigo. Even if conceptual analysis does not seem central to the artists’ poetics, the refined executive process and technical complexities their works spring from can lead us to read them as a sort of anti-ready-made, which is not neither the classical Dadaist sampling of a portion of reality nor the mimetic realism of classical art, but by the dismissal of reality in a strictly fictional way. Therefore, in this process realism is only a method, not the goal, because the ideology pursued is that of subverting its very status.

Strategies of approach
Overabundance is the main feature that stylistically characterises the works of Bertozzi & Casoni. The unbridled profusion of details, enpowered by the virtuosity with which they work with ceramics, allows the observer to grasp cognitive aspects that had previously escaped notice. For example, their flowers and animals display details (of physiology, shape and colour) that the observer would almost certainly have ignored had they encountered them in person. We could say, in fact, that their works intensify reality, urging us to recognise that which is usually overlooked. This process pushes the viewers to increase their visual awareness of what they observe. It makes the apparently latent intelligible. Furthermore, the exciting overabundance of stimuli full of vital energy somehow enlivens the very experience of seeing.
It is important to note how ceramics abound compared to references from art history, design or popular culture, that “lurk as parasites, citations, and perceptive traps […], a sort of sidenotes, illustrations of an encyclopaedia composed of forms and images”. [7] The artists operate within this structured method in absolute anarchy: “toppling iconographic conventions, overturning observational data, freely mixing the most diverse reference sources, constantly contradicting basic assumptions; and, above all, carefully avoiding any banally soothing and determinative hypothesis”. [8] In its careful styling, sophisticated composition that never cedes to loveliness, and detailed references, their excess serves to make the internal logic of reality visible/discussable through the creation of a subversive, altered version, “out of its mind”. The strategy they employ parallels that which Achille Bonito Oliva identifies in the Mannerists, for whom “deviation is a subversive tactic applied to a coded language that simulates a now modified, unrecognisable reality”. [9] Bertozzi & Casoni analyse/describe critically the world by breaking it down and recomposing it with another material. There is a forward-moving rejection in their oeuvre, enabled by an absolute technique in which hyperrealistic tension leads, ad absurdum, to the betrayal of reality through the creation of another version of it. They enact “a strategy for approaching life that resolves its missing reality, that is, the daily and purely chronological one, by asserting a surreality built on imagination, dreams, the madness that everyday life can only suspect”. [10]

Subjects and melancholy
Ceramics is at once the medium of slowness and waiting, aspects that correspond in Bertozzi & Casoni’s expressive language to the complex phases of research, modelling, drying and the anxious calm of suspension, characteristic of firing. The choice of subject and construction of the work instead follow extremely freewheeling process, in which the artists’ imagination, a certain degree of emotional warmth and planning needs must negotiate to find a feasible form. In a conversation Jolanda Silvestrini held with the artists, Giampaolo Bertozzi described how the decision-making processes that lead the artists to imagine and then create the sculptures “are triggered by the things around us: the closest, most everyday ones, rediscovered by a gaze intent on seeking a link between the aesthetic form we are observing and the mood that drove the search”. [11] Contrary to what one might imagine at first glance, the emotional component in their work is strong. As Stefano del Monte Casoni explained immediately afterwards, it manifests itself in a continuous “short-circuit of dissonances between pleasure and horror, attraction and repulsion, illness and voluptuousness, bulimia and renunciation, acceptance and forgiveness, suspension of judgement in favour of appearance”. [12] In this prolonged wandering, the choice of subjects and their iconographic variables comes from the inexhaustible debate between personal sentiment, art history, symbolism, bibliographic research, pop references, new technical solutions and the limits of the materials: all this in a state of uncertainty in which “since the world is unlivable, the artist overcharges the metaphor of his work until it overflows with tension and contortion”. [13]
Representations of living subjects from the vegetable and animal kingdoms (flowers, fruit, greens, plants, anthropomorphic monkeys with menacing details) recur in the artists’ work. As with food, in particular end-of-meal leftovers, and that which we are anthropologically accustomed to removing from our sight, and is perhaps even more desirable for this reason: rubbish. Nor are chaotic situations involving everyday objects lacking. These are often employed in compositions that oscillate conceptually between emphatic objective realism and unnatural Mannerist construction. While one might, upon first glance at the subjects and situations represented, perceive echoes of the nouveaux réalistes in the love for popular and trivial objects, in the small snatches that display the world for what it truly is, nothing could be further from the truth. Their approach, as Letizia Ragaglia points out, is in fact the opposite: “while Neo-Dadaist assemblages are composed of several objets trouvés, the ceramics of Bertozzi & Casoni are ex novo creations, the result of scrupulous and complex research”. [14] Overall, the sculptures with fewer elements are more lyrical, open and conciliatory, while the more complicated ones are endowed with greater surreal tension due to their material emphasis and three-dimensional development of volume. Iconographically they deal with the still life and vanitas genres, producing in the viewer the warring sentiments of teeming vitality and heart-rending sadness, like unseasonable postmodern memento mori.
Animated by apocalyptic energy that crackles with the meticulous richness of the compositions, the ceramics ontologically cross the boundaries of possibility – even though stylistically realistic. They stage, as Tiziano Scarpa writes, “an endless, abusive consumption, a devastating consummation. The meal has been devoured, the environment ransacked and destroyed, a table groans with leftovers scattered in small mini-orgiastic heaps, post-orgiastic stacks of dishes. There are ordinary types of comfort and unlikely leftovers; there is fruit left to rot that feeds insects and storks that have serenely nested on top of car batteries”. [15] On the other hand, the works seem to aptly prove the principle that “art does not directly depict the world, but only its feasible and deviated references”. [16] After observing the works of Bertozzi & Casoni in their heady details, once the orgasm of the gaze has passed and sight gives way to other senses, one is progressively enveloped in a silence that remove every noise. A feeling of post-coitus emptiness that generates a sense of fidgety loneliness, of melancholy that smells of death. But also of life that smoulders in secret under the ashes.