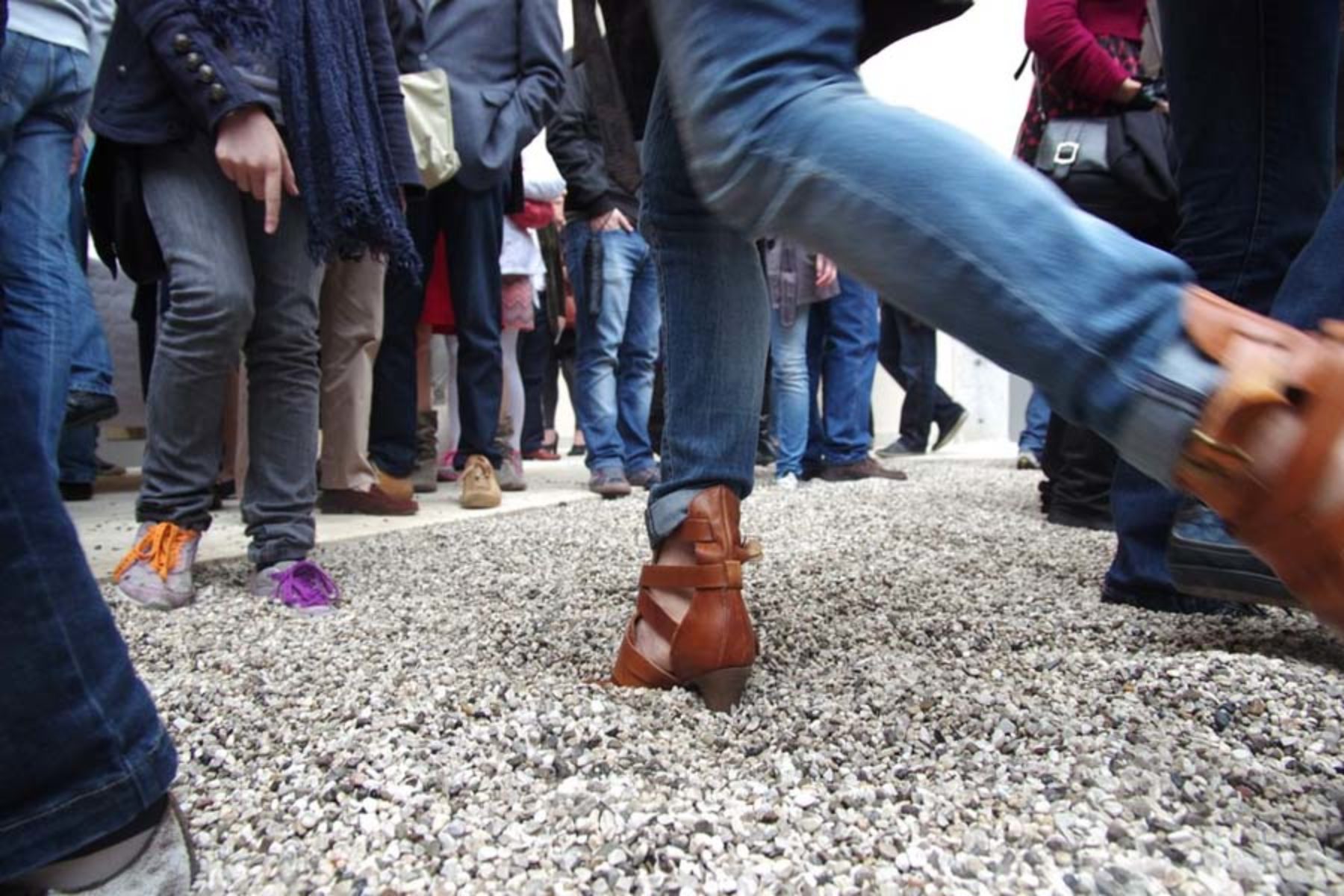 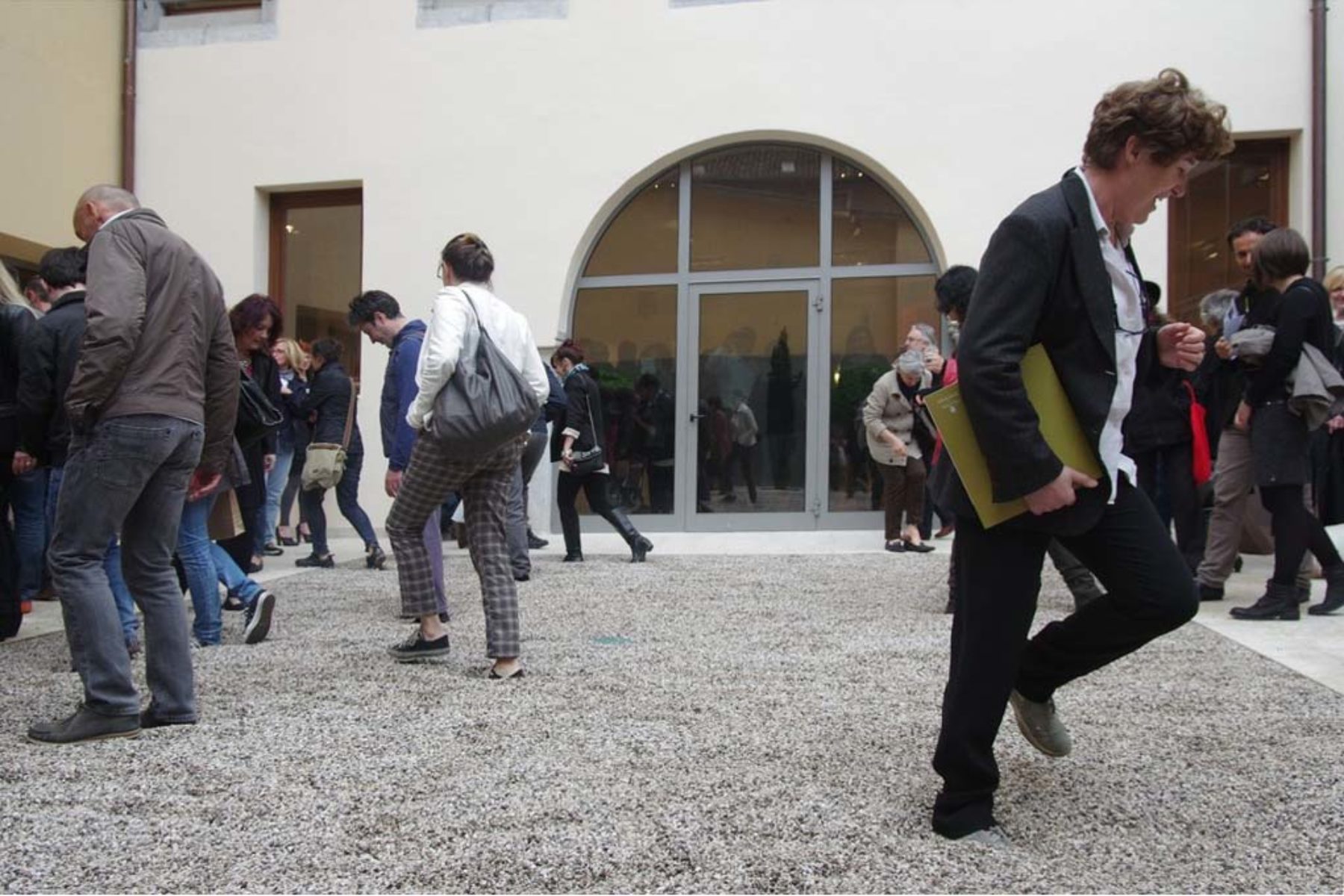 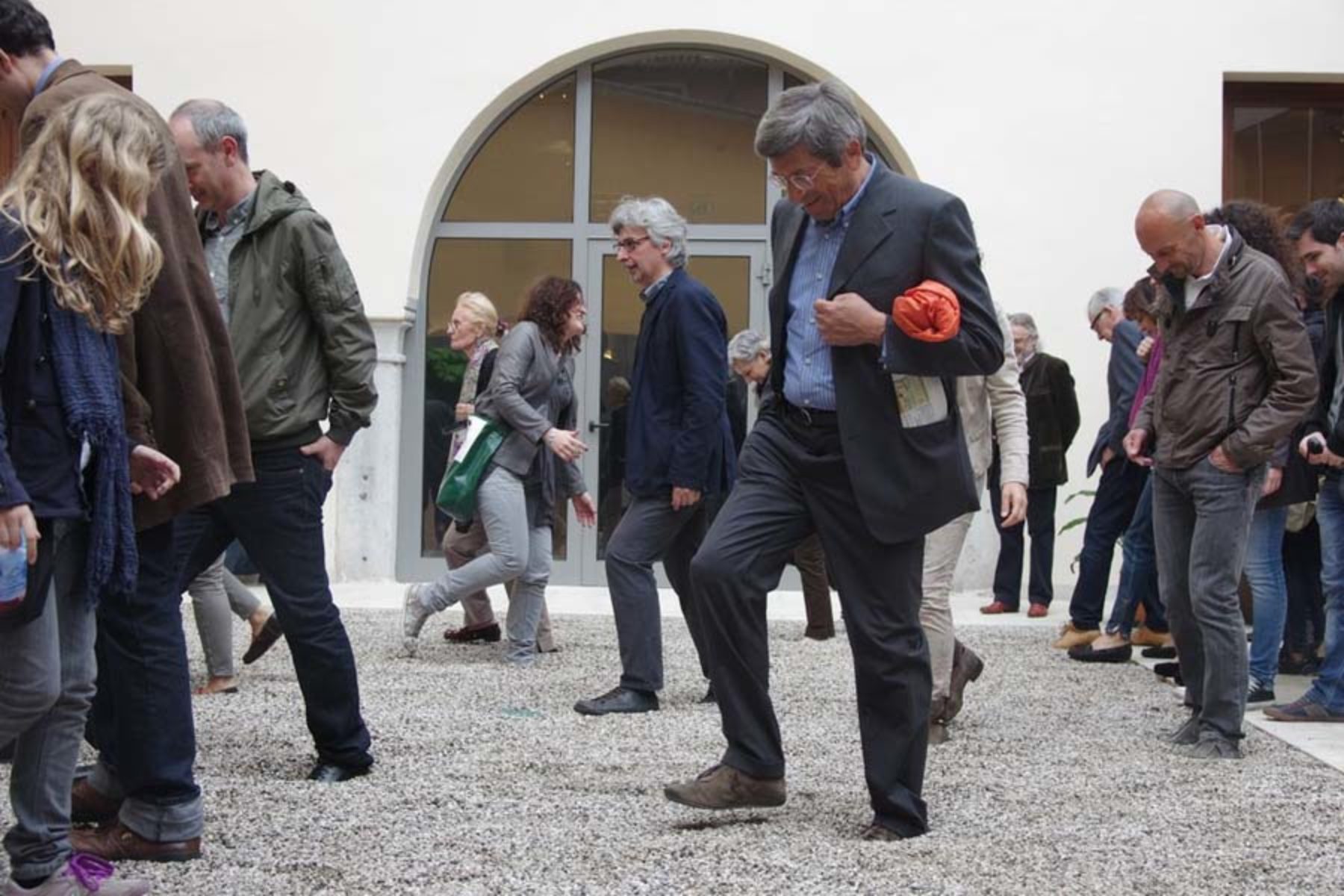 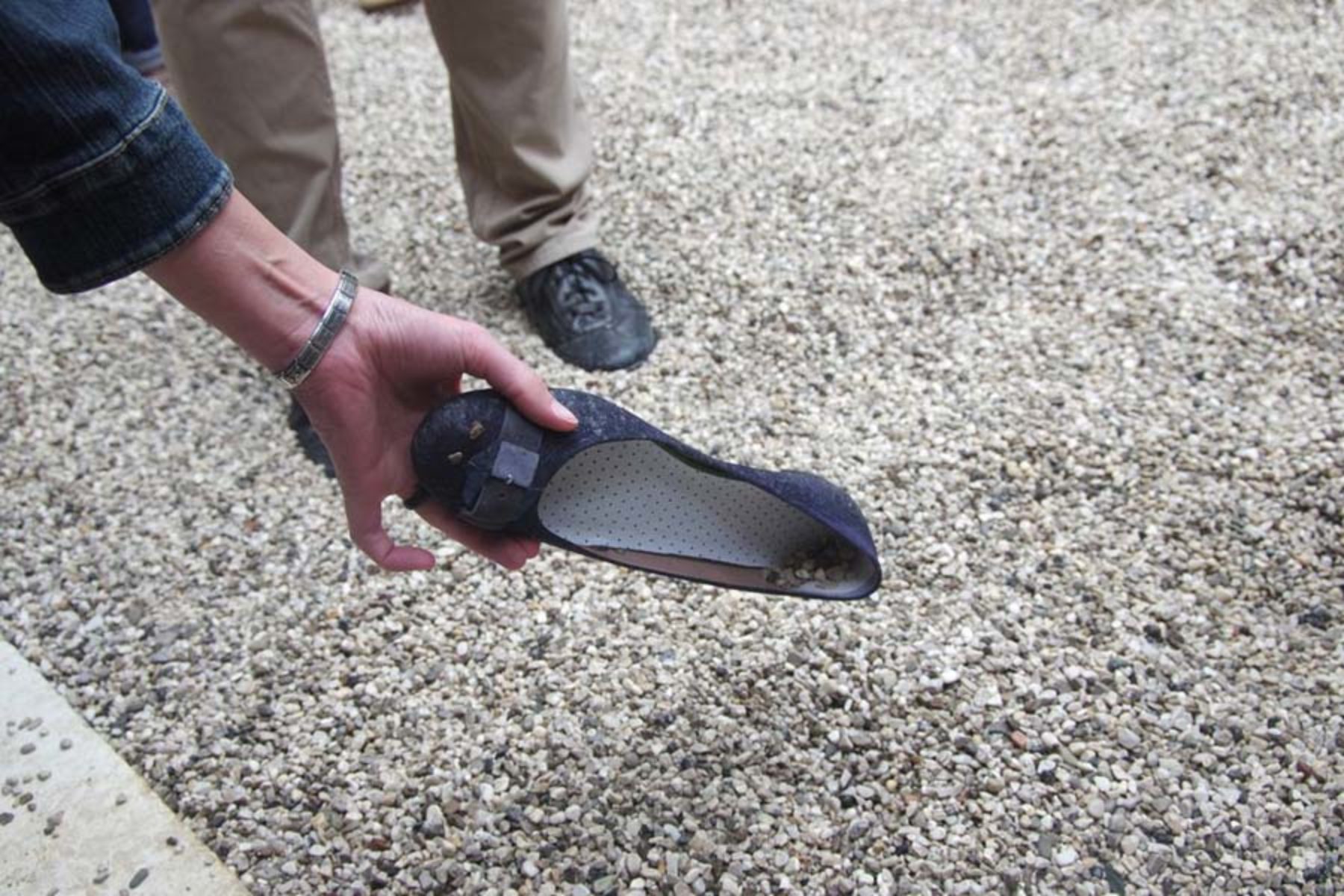 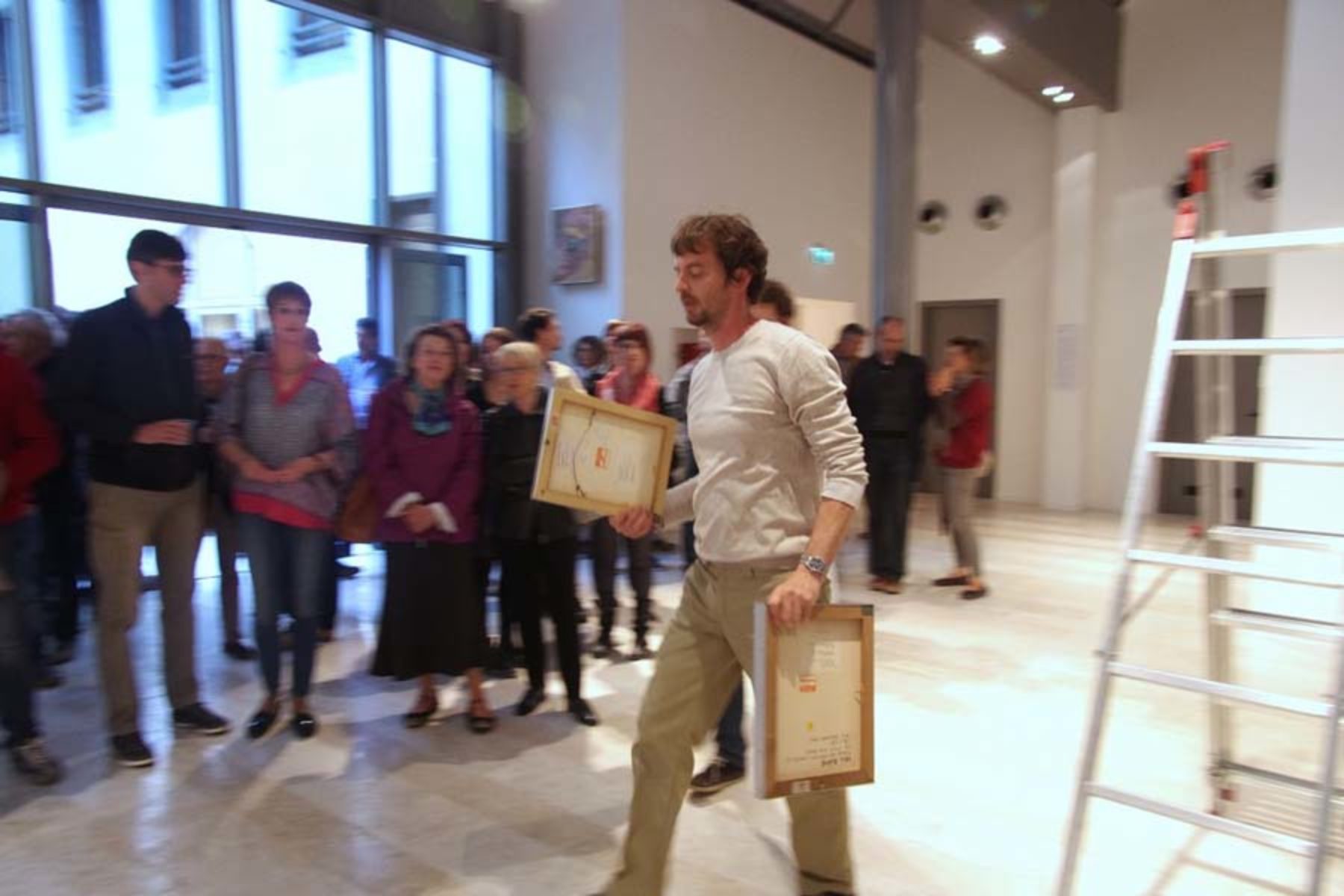 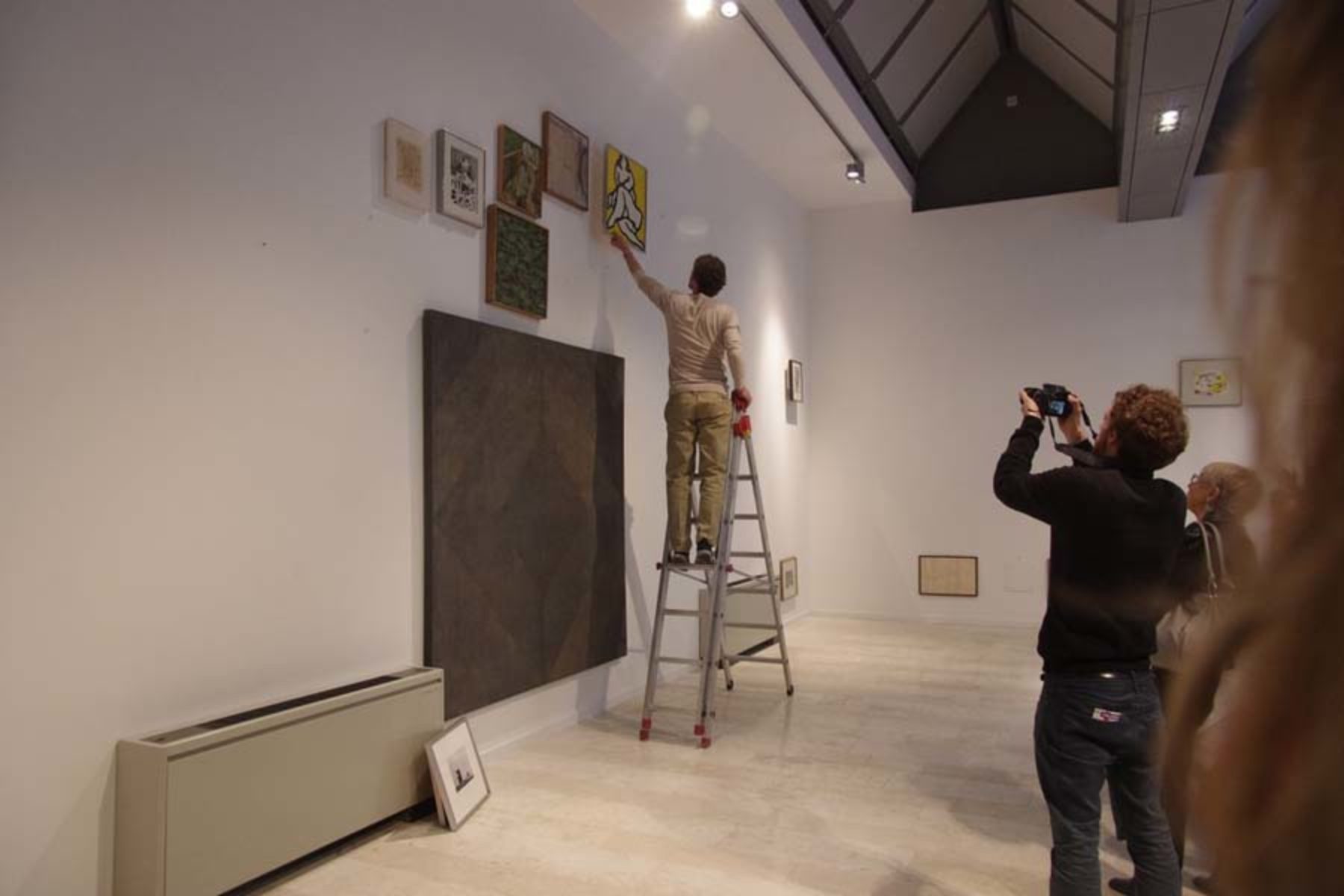 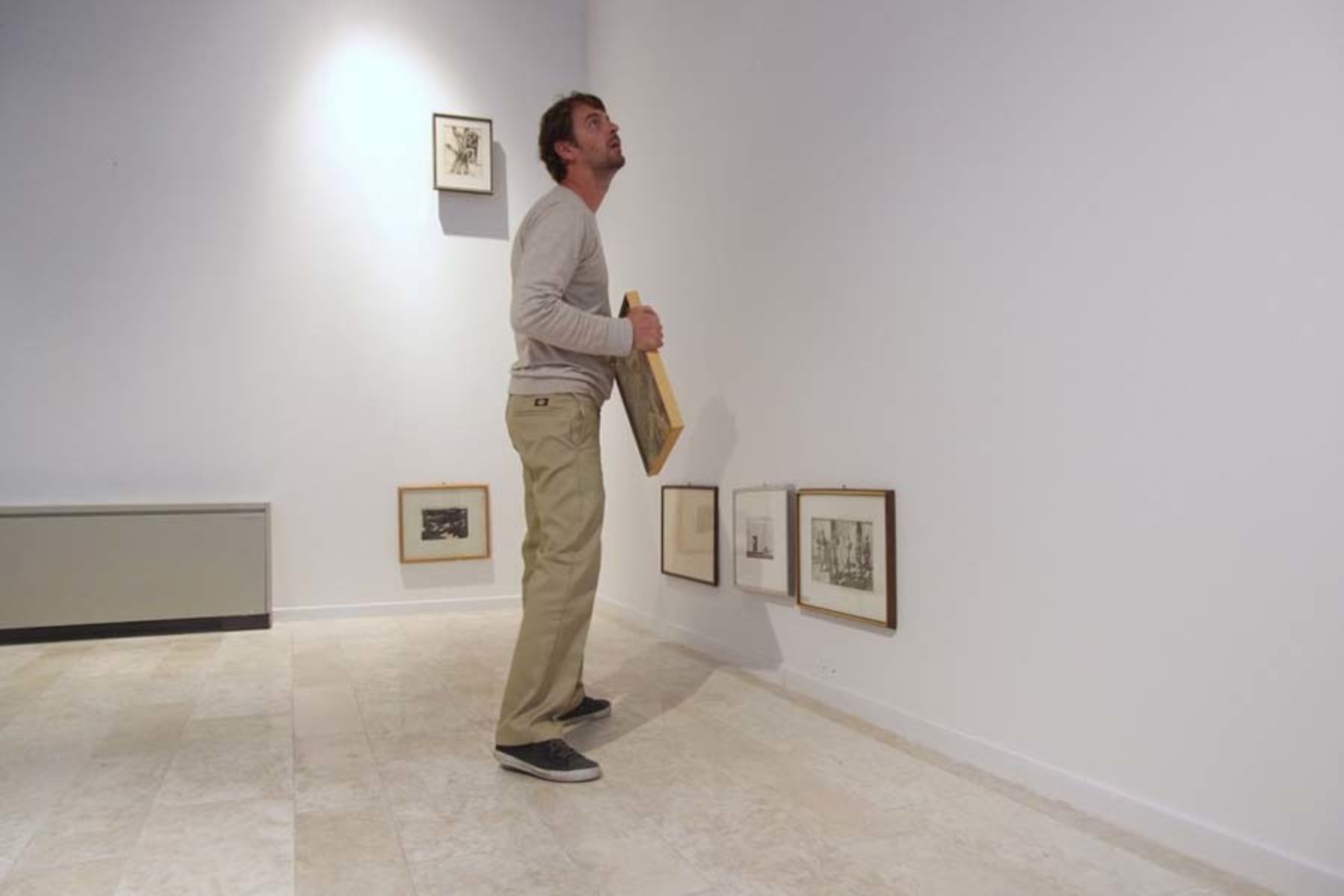 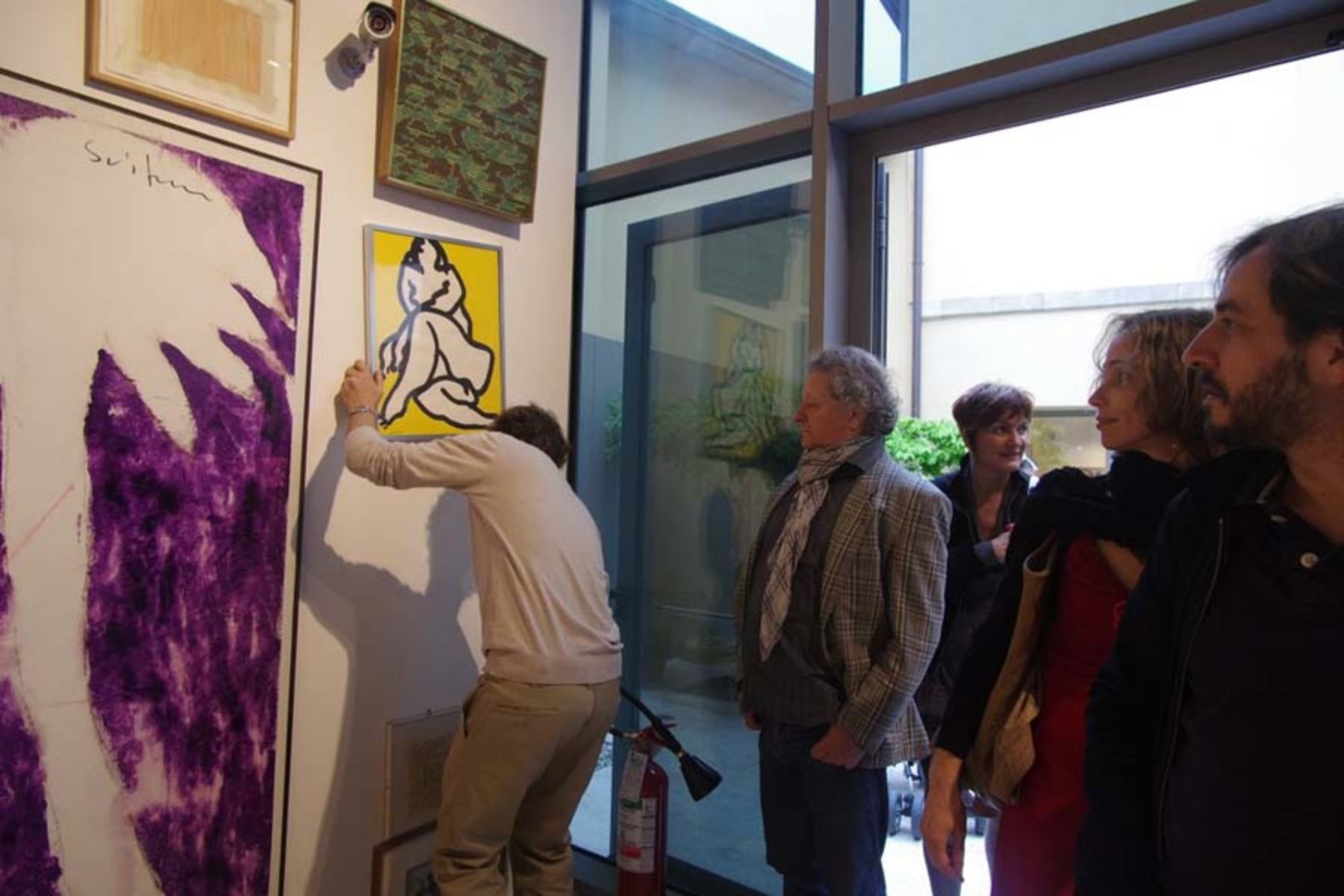 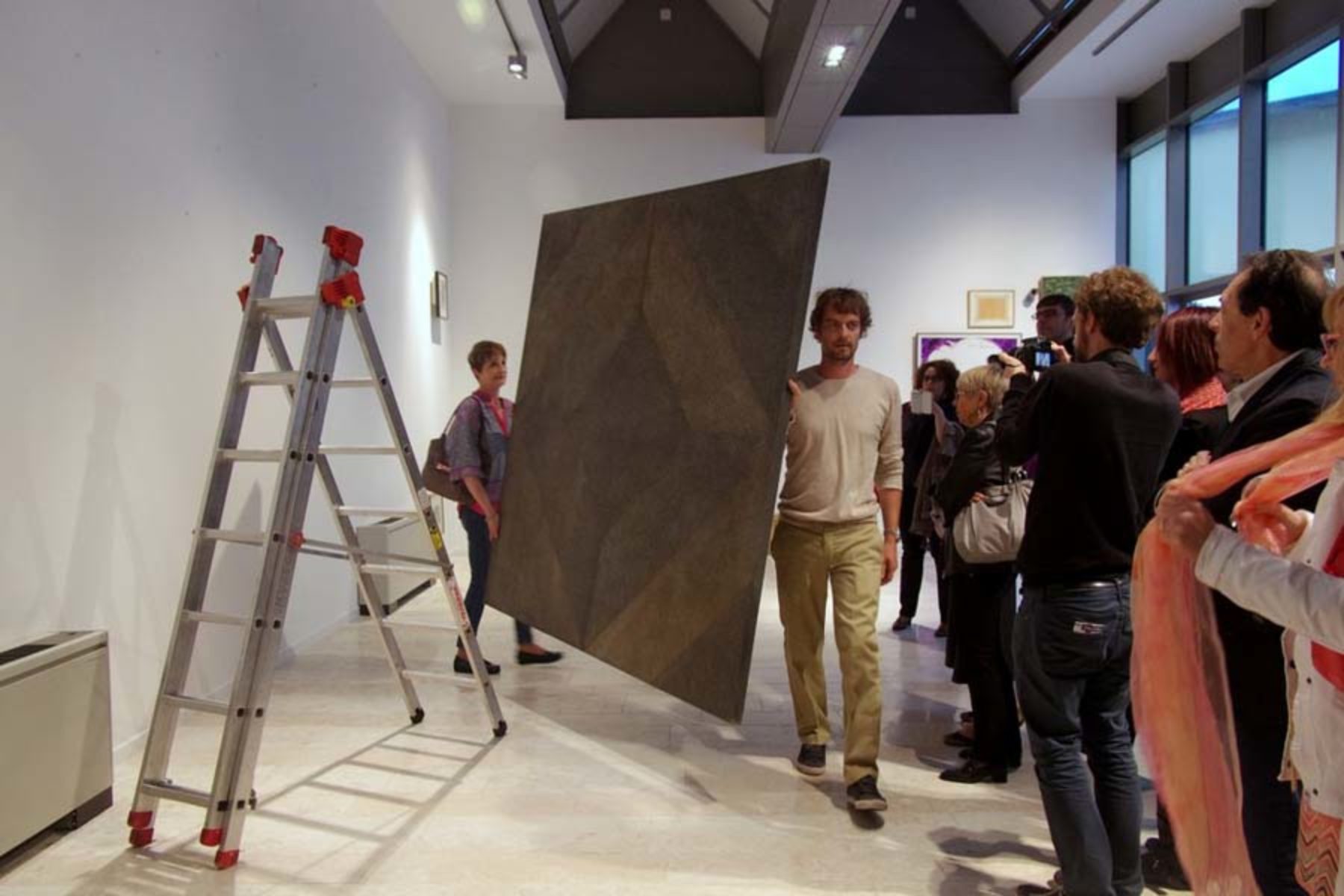 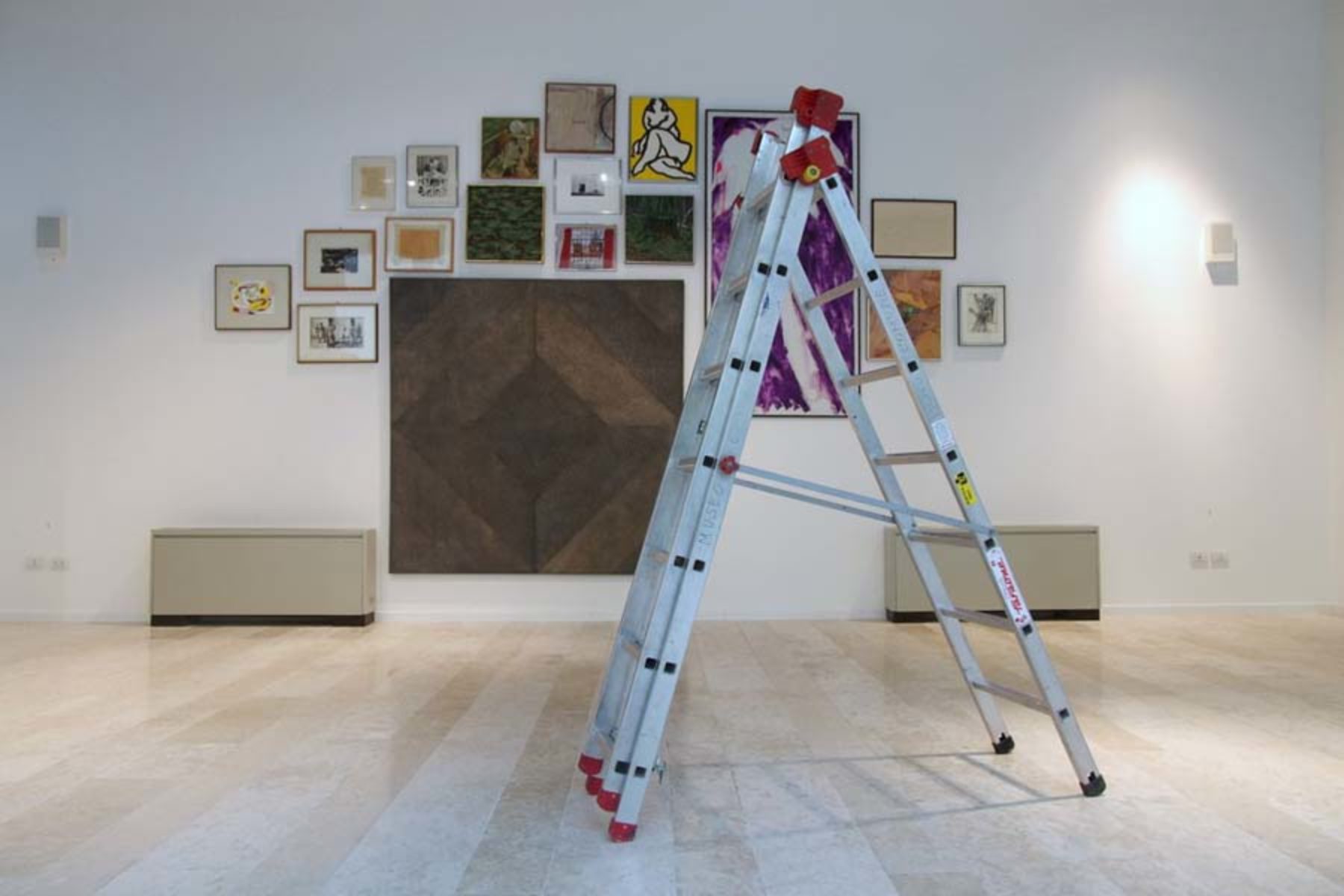 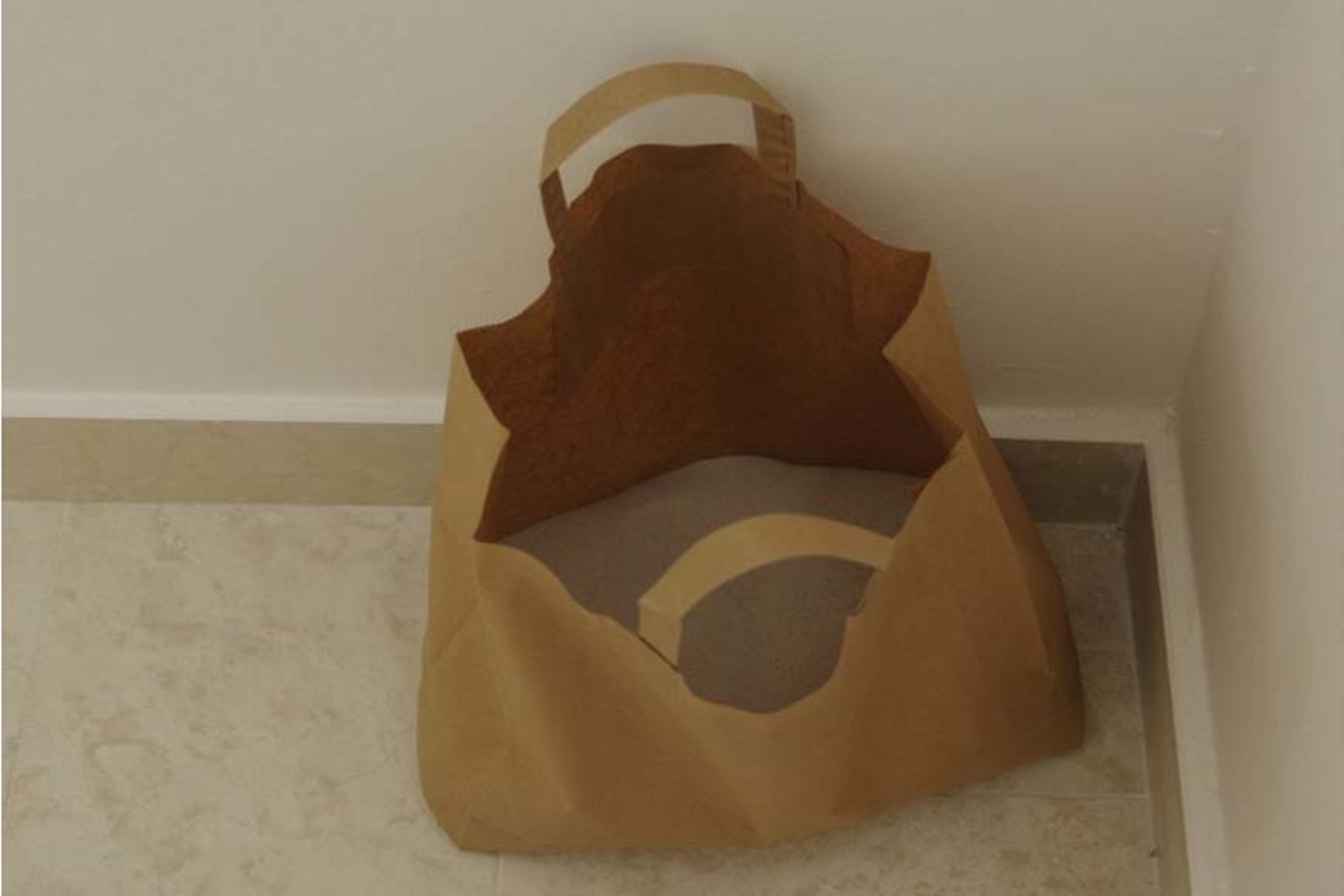 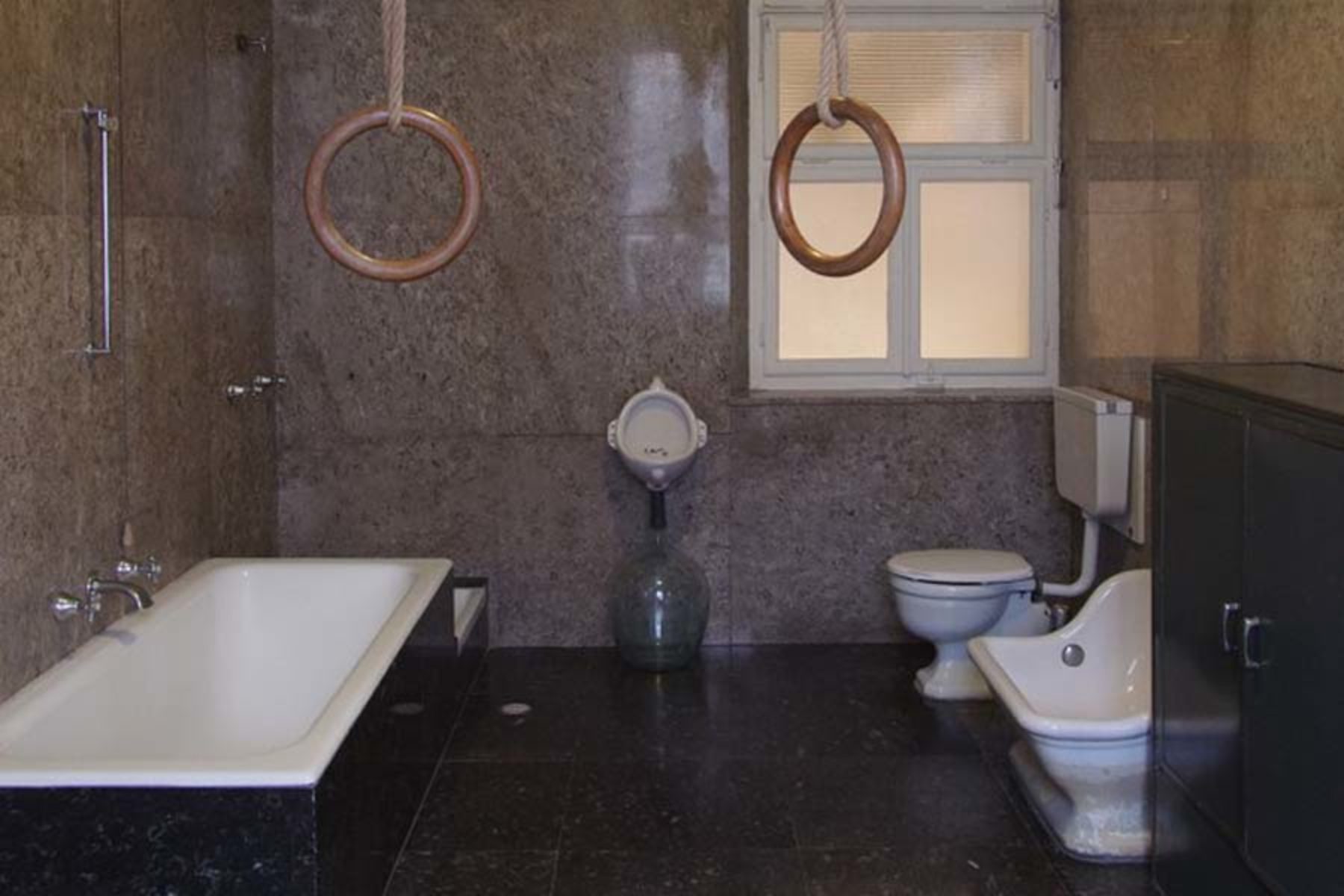 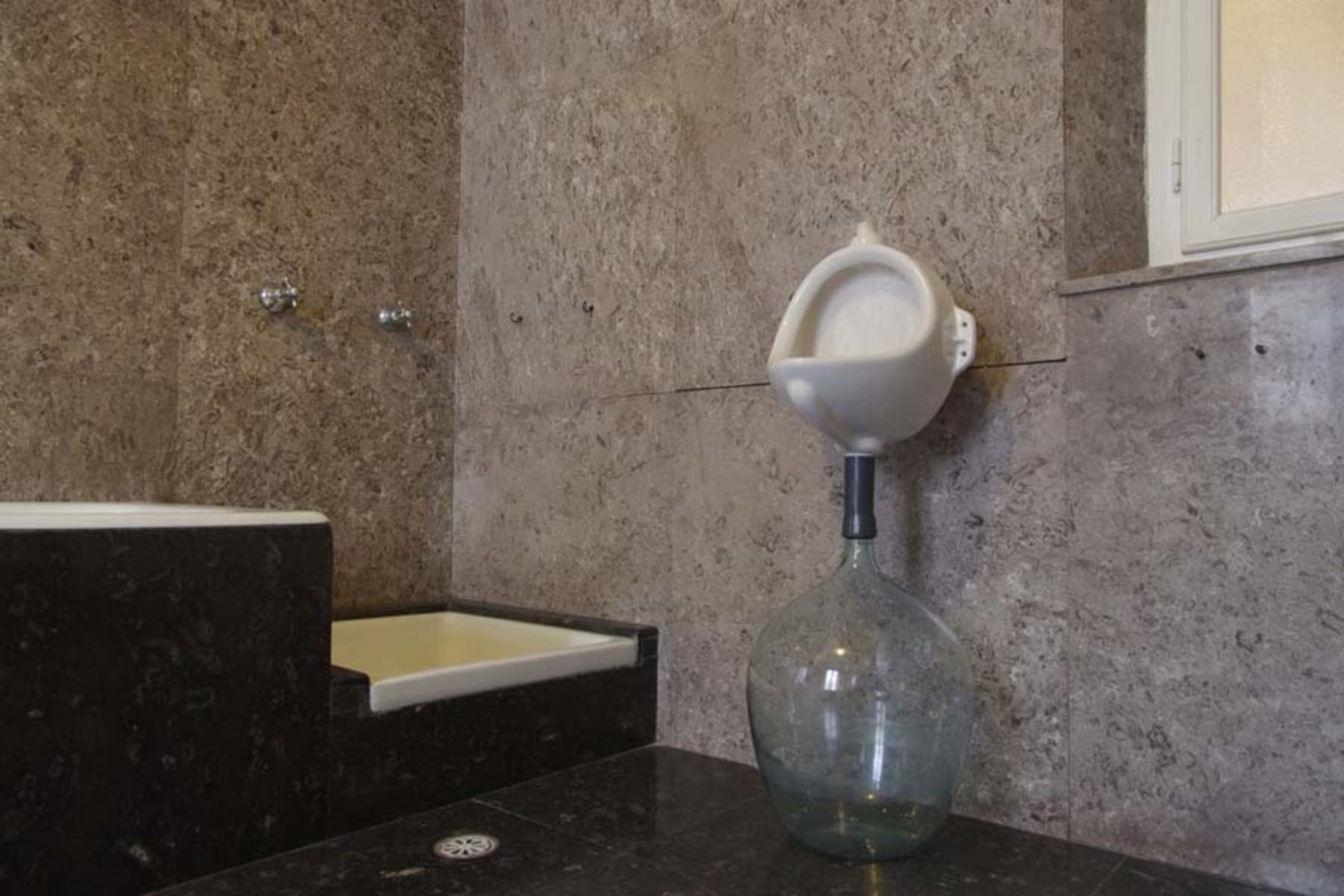 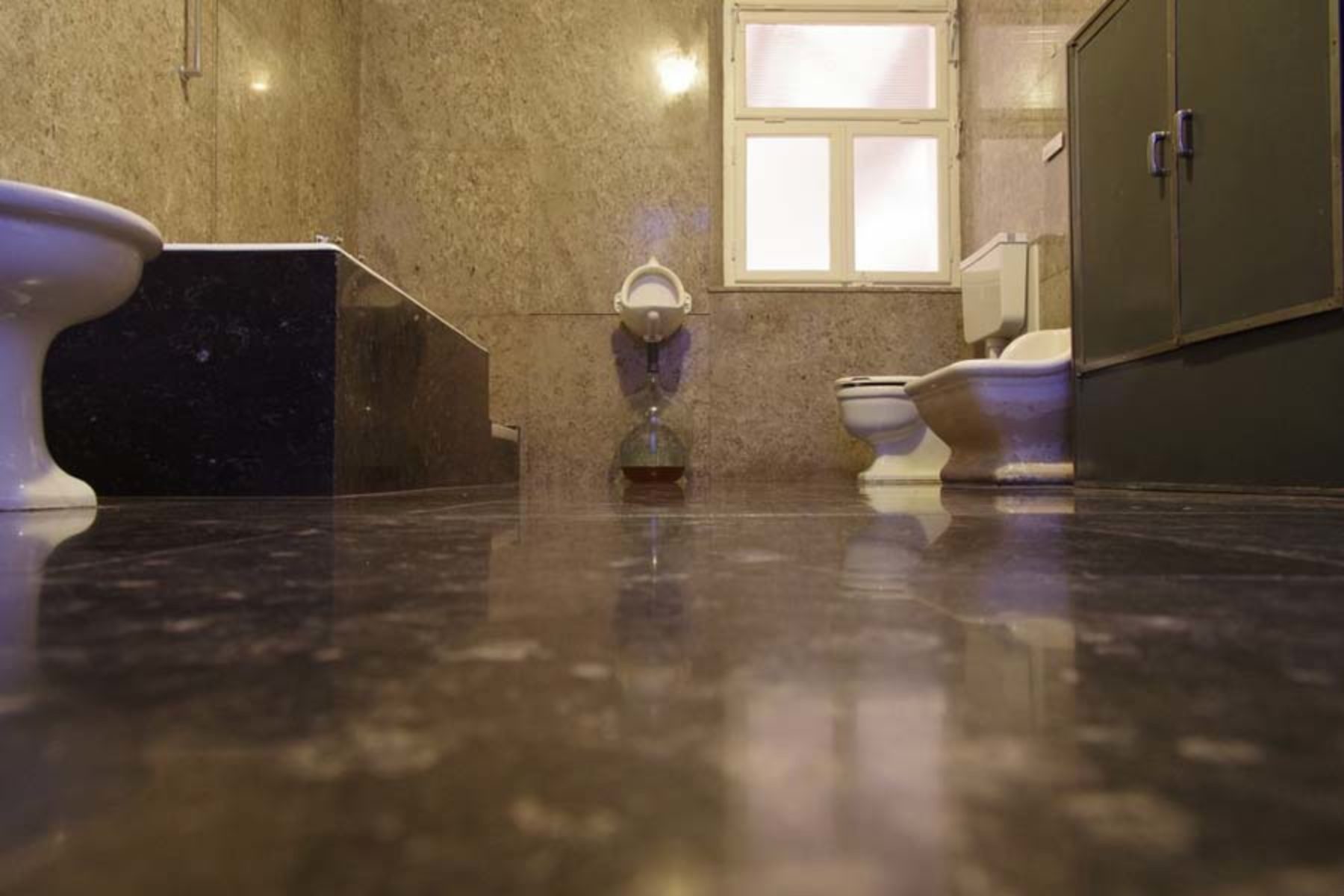 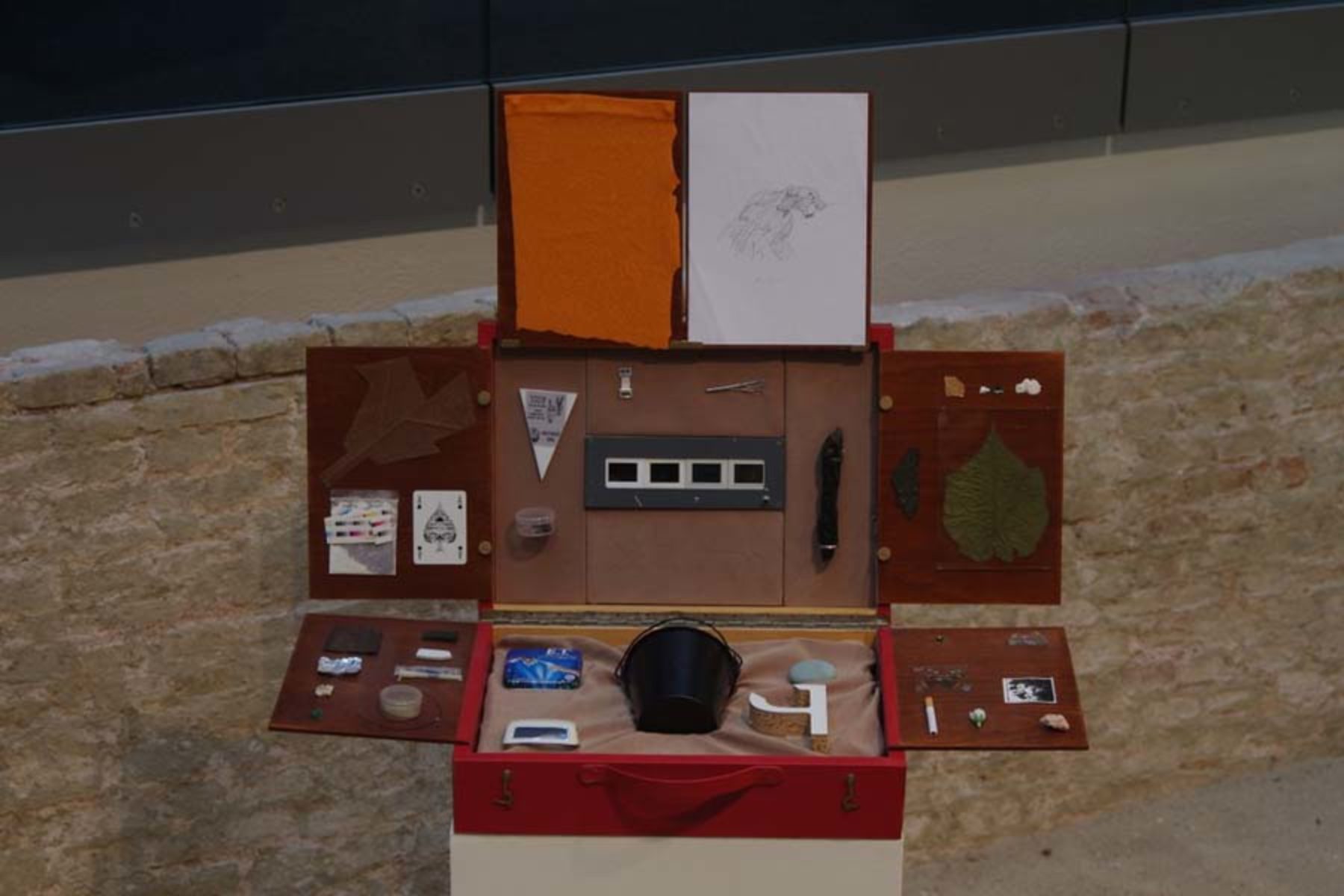 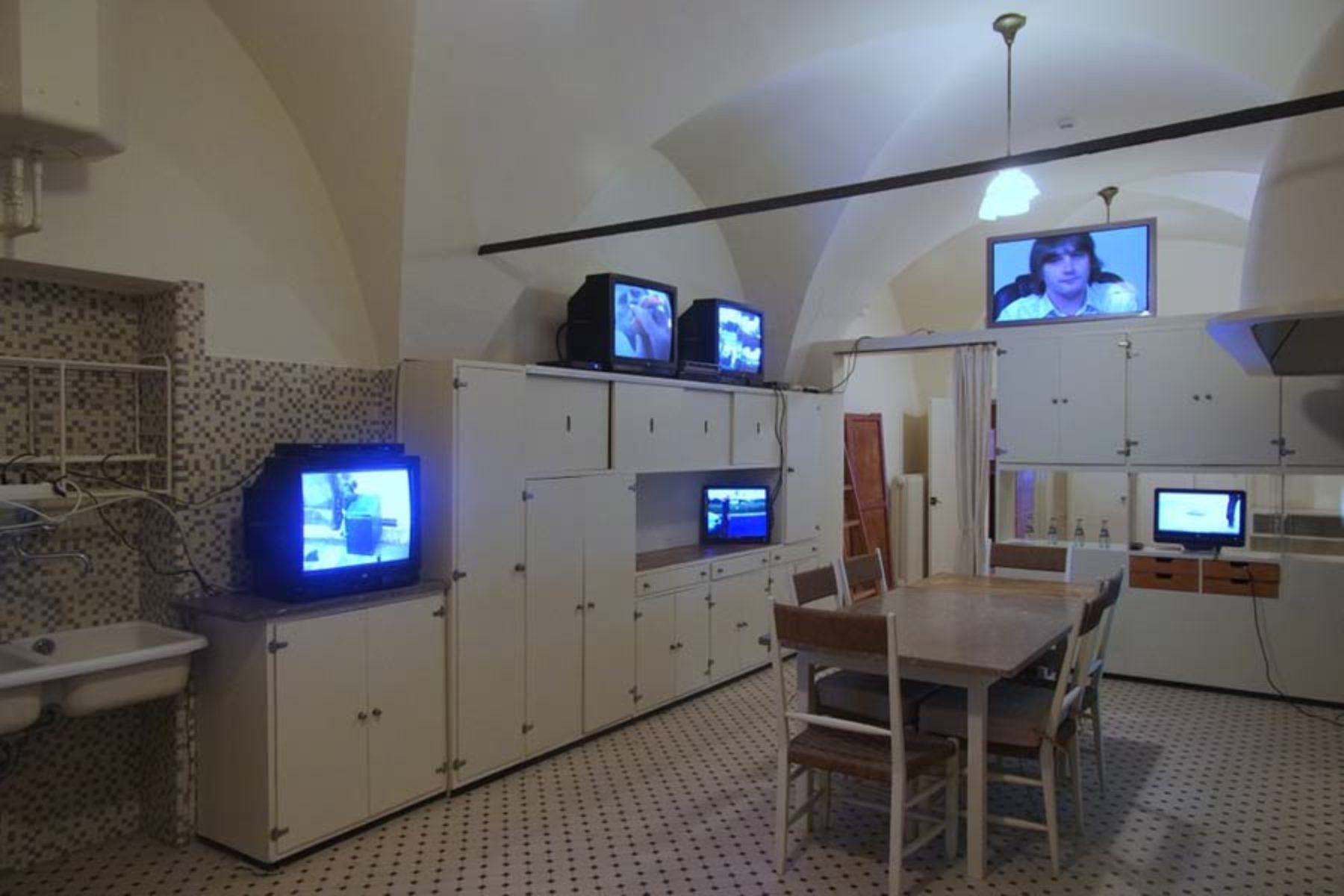 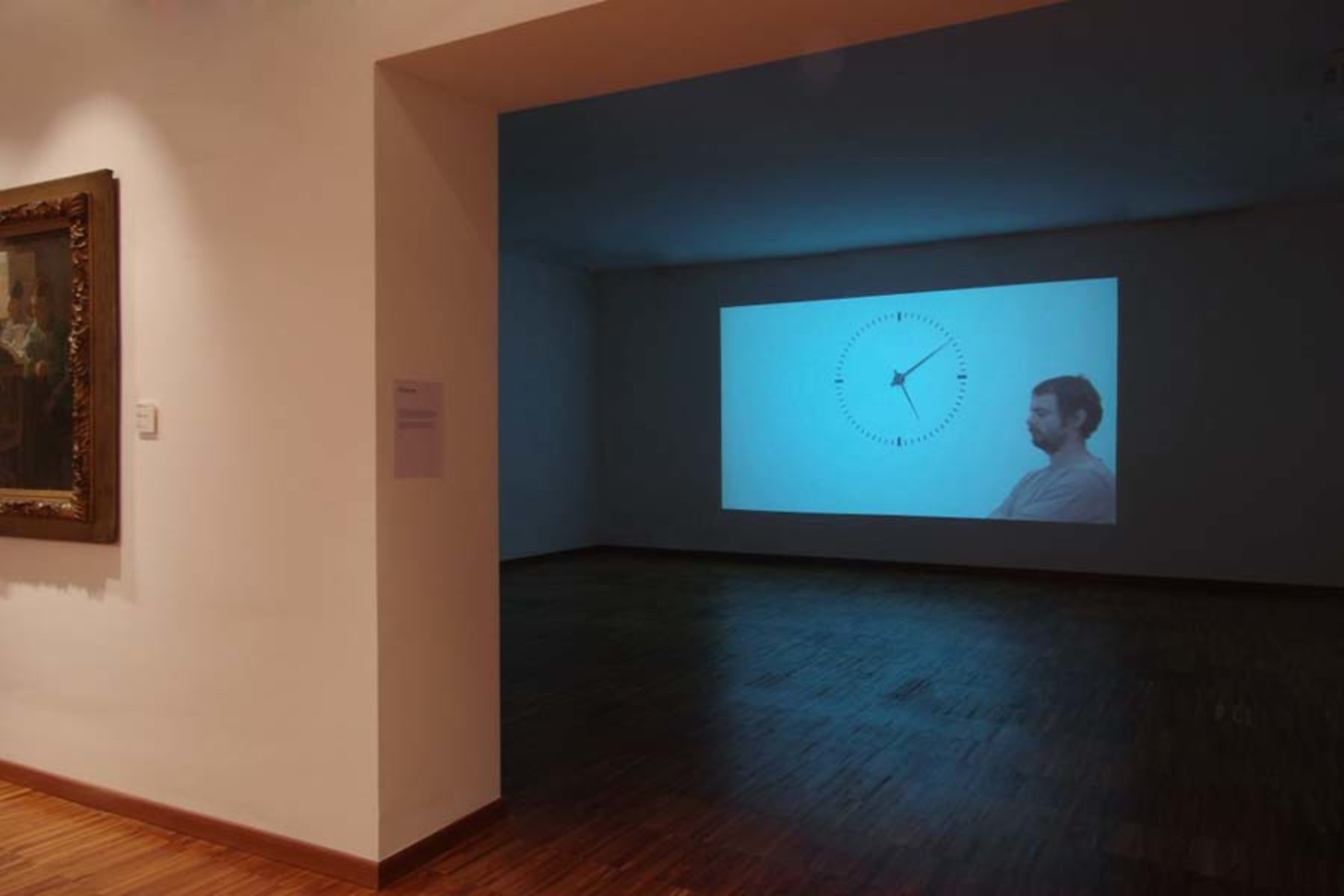 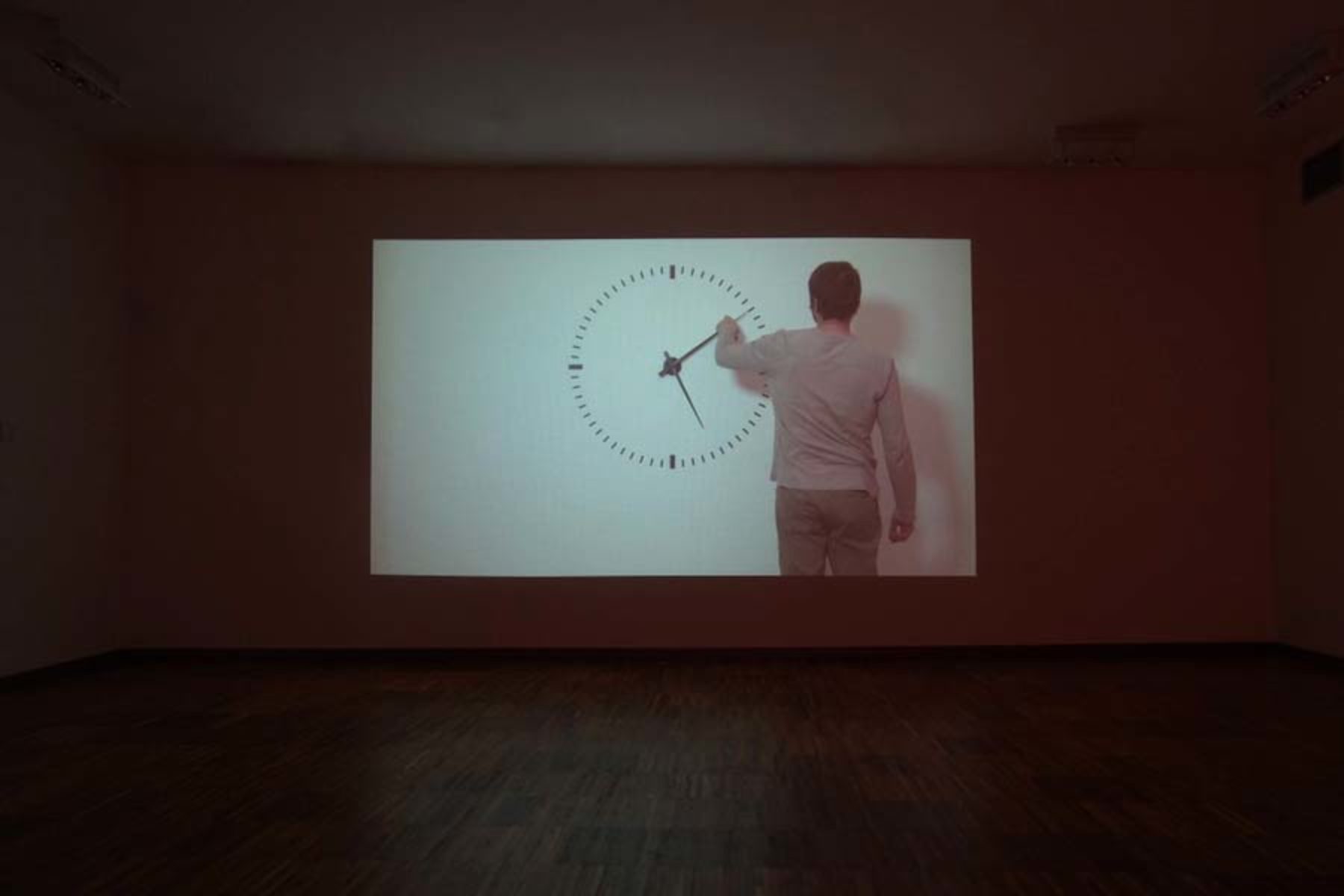 Try walking in my shoes, with a stone under your toes
Daniele Capra


Going for a wee with a stone in my shoes
I am not in any way a well-mannered gentleman, nor am I a snooty stickler for etiquette. And I’m certainly not a socialite dandy. And yet I had never taken my shoes off in a museum before, or urinated in an artwork, worried that a museum guard might catch me red handed. Whilst you might not doubt that I have recently done the first, but you are probably incredulous about the latter. On the other hand, as the philosopher Gorgias warned us “the deceiver is more honest than the non-deceiver, and the deceived is wiser than the non-deceived”.[1] However I don’t write fiction, and these are not mere flights of fancy: Ivan Moudov made me experience all of these. If I was a child caught with his hands in the sweet jar, I would say “it’s all Ivan’s fault”.
Many of his works were intended to make the “emancipated spectator” [2] accept and confront completely unexpected provocations in a museum context, like in the instances of Stones or the pissoir of Already Made 3.
In Stones, the pebble-covered courtyard of Casa Cavazzini is surprisingly yielding, and people walking on it find themselves sinking ten centimetres into the gravel. Layers of foam rubber were placed under the pebbles to give the viewer an experience that is at first disconcerting and then funny. The experience overturns the long established topological assumptions about the consistency of the surface we walk on, with the trivial effect of finding your shoes full of stones (which many visitors, me included, removed by taking their shoes off and shaking them out).
In Already Made 3 Moudov installed a signed copy of Duchamp’s Fontaine – to which he added a round demijohn to collect fluids – in a 1930’s bathroom which is part of the tour of Casa Cavazzini. The bathroom can be seen but not used by visitors, and the work is in front of a real pissoir which bears all the signs of having been used, as witnessed by the presence of liquid in the transparent bottle. The viewer wonders whether the artwork has actually been used by someone before them or if the artist wants them to believe it was, but most of all they want to use the art work, hoping not to be seen by the museum guards. The sophisticated viewer finds themselves wanting to push the boundaries of their reserve and break the rules of the museum by urinating in the pissoir, adding their urine to that which they think is already contained there… unless they are caught. The game being played is one of expectations and rules, and the opportunities the viewer has to break them and do something they are subtly driven to do. The deception is also supported by the fact that the viewer is caught unawares in a situation which is on the borderline of plausibility: reality and the artwork (fiction by its very nature) overlap, making the viewer the weakest link.
The majority of Moudov’s works share a sharp analysis of power relationships between people and generally accepted conventions. Artists often want to challenge abstract rules or habits that regulate a certain aspect of life. An example might be urinating inside a museum, but it could also be the right of way on a roundabout in One Hour Priority or the possibility of freely entering or exiting a room in a building. Moudov takes these rules and habits to the extreme, or to being deliberately broken, in order to reap unexpected personal advantages.
It is in this sense that the work of the Bulgarian artist is political, as it seeks to reveal the human need to challenge or sidestep anyone with even the slightest power, as well as the possibility for an individual to exploit the rules that should be shared and respected by everyone, in an unexpected and opportunistic way. [3]

The viewer is screwed
One of the most intriguing qualities of Moudov’s work is that of exploding the codes that define the normal (i.e. habitual and shared) relationship between viewer and artwork. The Bulgarian artist sets in motion a process and invites the viewer – who is unaware of what it might be – to take part in it. Traditionally the viewer only has the right to express an aesthetic (or possibly political or social) judgment of the artwork, but this process breaks with that tradition. For example, watching the artwork made up of stolen fragments of other artworks (Fragments), or a video where a theft is being committed (like that at IAC, in Lyon) is not all that different from being the lookout during a robbery or being an accessory to a theft. Provocatively, Moudov does not inform the viewer that they are becoming an accomplice to an offence, thus making their involvement completely involuntary. The viewer is therefore not only a passive element, as they would be in front of a television, where a very low level of participation with the contents of the broadcast are required. Rather they find themselves in the embarrassing role of accomplice, or possibly even becoming the formal- if unwitting- instigator of the crime.
A priori and totally independent of whether he has the viewer’s consent or not, the artist unilaterally renegotiates the relationship between viewer and artwork, in a way that makes any opposition impossible. The viewer inevitably finds themselves framed in the dual role of end-user and commissioner (or instigator). In such a circumstance, accepting or rejecting, praising or criticizing the artist’s actions has very little point, as the spectator is in effect, and in spite of themselves, called upon to witness a process which is perfectly designed to frame him. Doubt about the legality of Moudov’s actions, the legitimacy of appropriating the works of colleagues, or the legal or ethical issues that might arise from such actions, are all pointless. After viewing the artwork, the viewer is quite clearly screwed (just like in police movies).

In first person
Nineteen Problems, Eighteen Paintings is a rearrangement of artworks and a performance that Moudov devised specifically for Casa Cavazzini. In this he hung works from the museum’s collection in the museum project room, to cover and temporarily hide the many elements that constitute a visual disturbance in the room. During the inauguration Moudov temporarily repositioned the artworks in their intended positions, giving them an ironically mimetic function: they are meant to hide imperfections of the space from the viewer. However, the paintings are hung at heights, and in ways, that differ from the traditional exhibiting criteria in museums (a further breach of a well established rule), and as such the viewer sees them as peculiar, disconcerting presences.
As well as cleverly bringing an extra function to the works in the collection, the artist also takes on the role of activator or reagent, directly intervening himself, before then letting the artworks be repositioned in a more traditional arrangement.
Moudov chooses to use himself to measure his own art, in a role reminiscent of Leonardo’s Vitruvian Man. We can see this in the video Performing Time, where he stands for a whole day measuring the passing of the minutes without the help of any time-measuring devices, performing the function of eyewitness to the flowing of time. The extremities of his body touch the borders of that which can be known, of the world that can be touched and understood. The difference is that Moudov uses the circle that surrounds him to play hula-hoop.

[1] Gorgias, fragment B 23 DK, published in H.S. Harris, The Reign of the Whirlwind, 1999, p. 325, see here.
[2] J. Rancière, The Emancipated Spectator, Verso, London and New York, 2009.
[3] Curiously this aspect is a metaphor for the market and modern capitalist society, where a law which seems (or was intended) to be fair and reasonable does not in fact stop an individual from profiting at the cost of others.