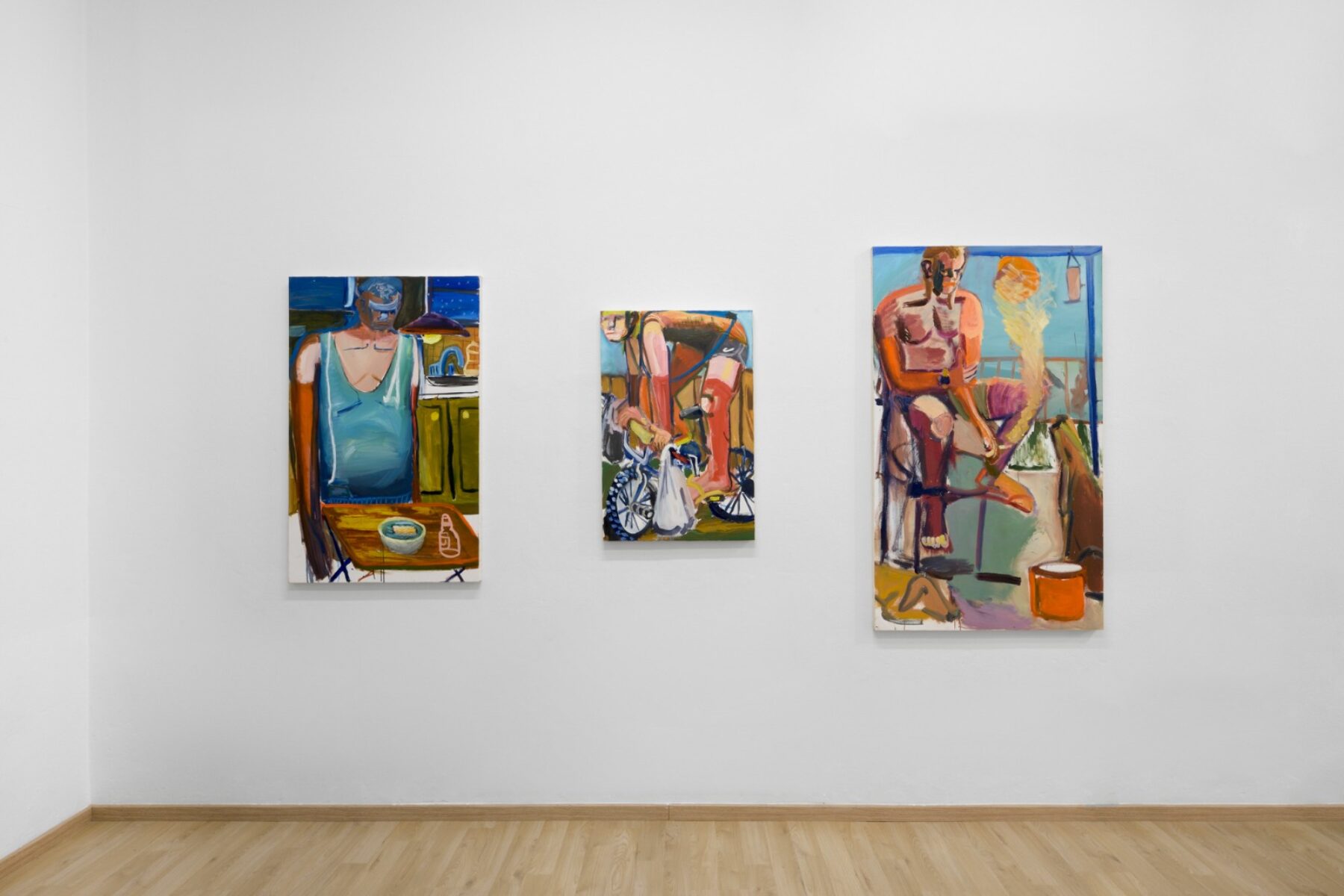 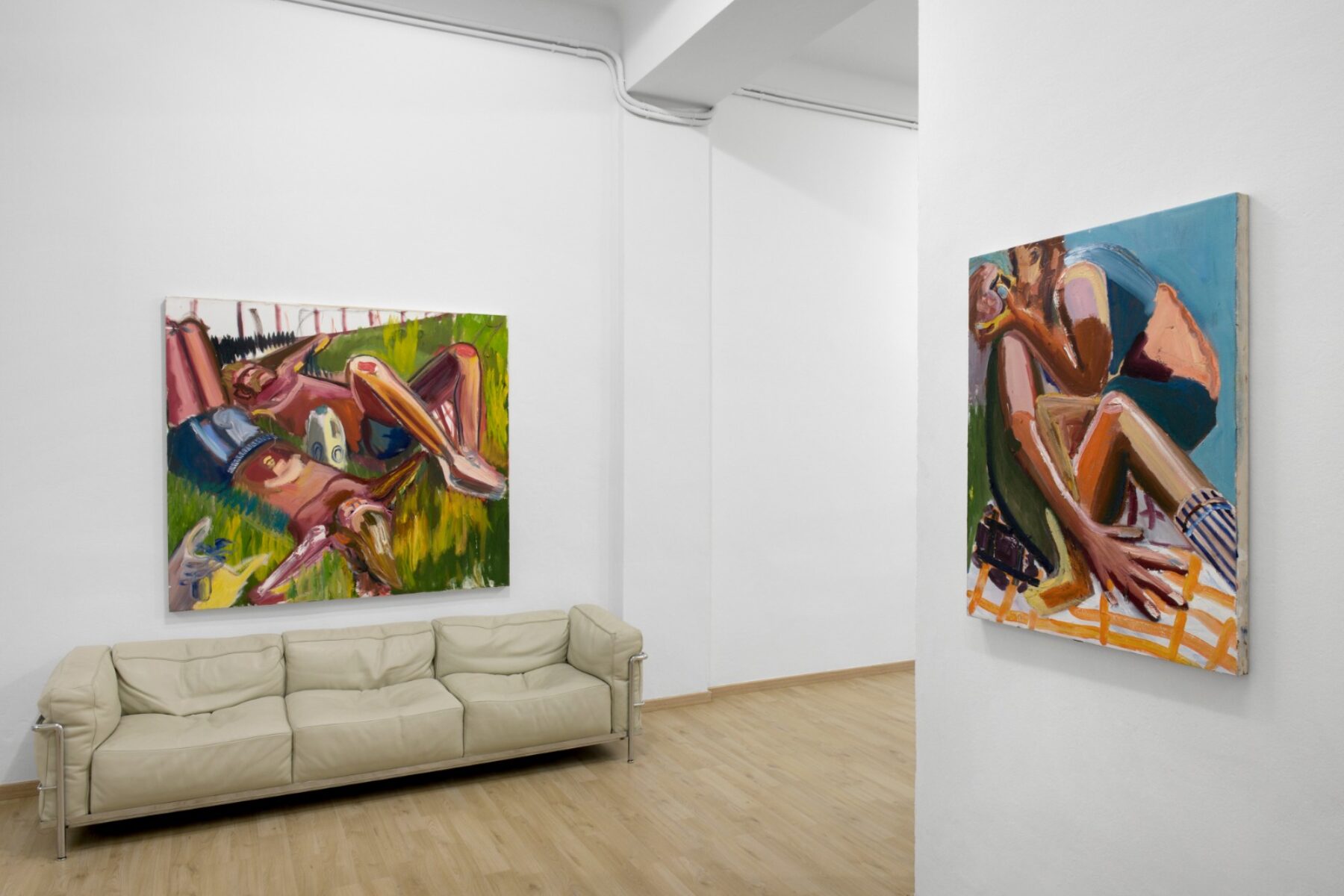 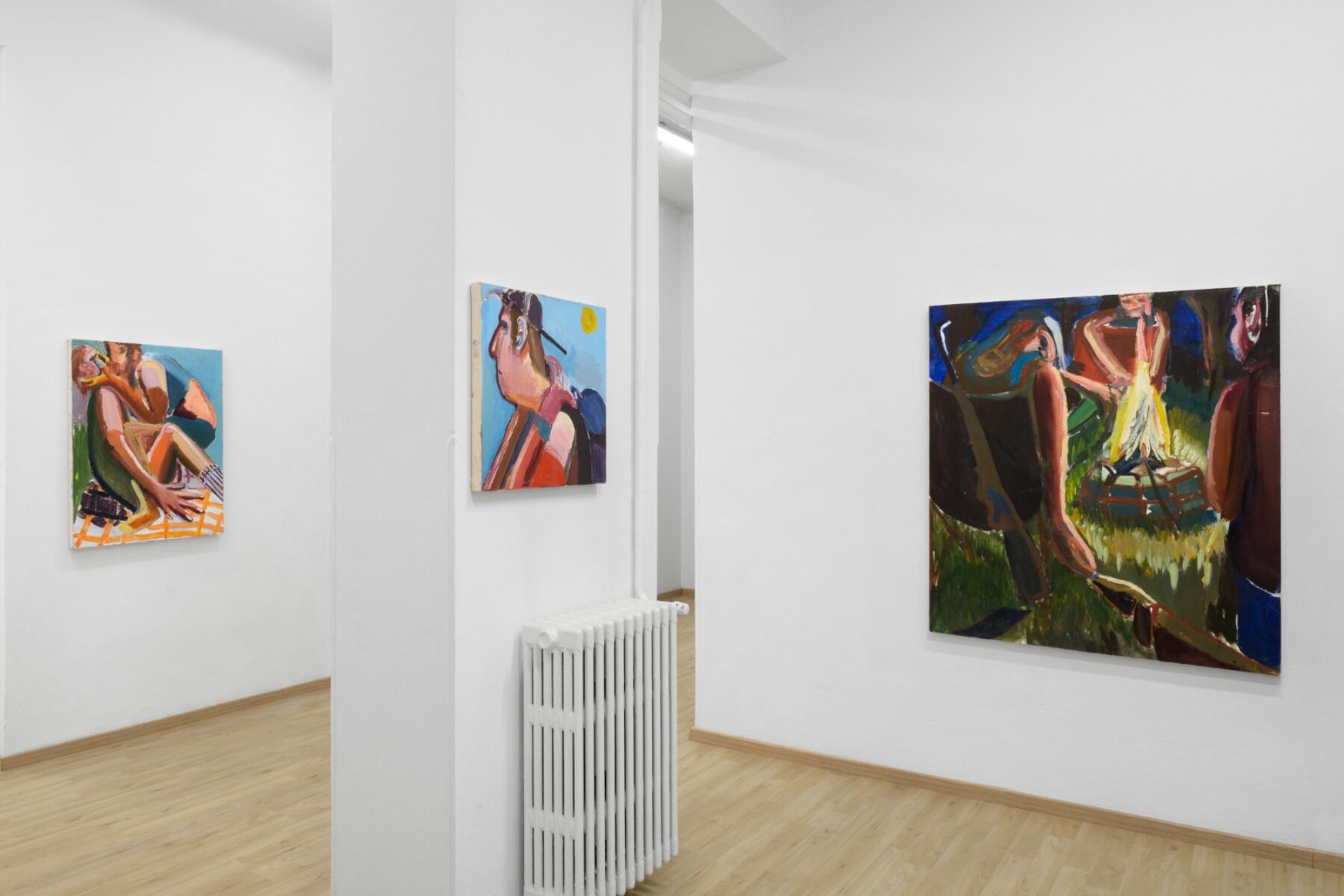 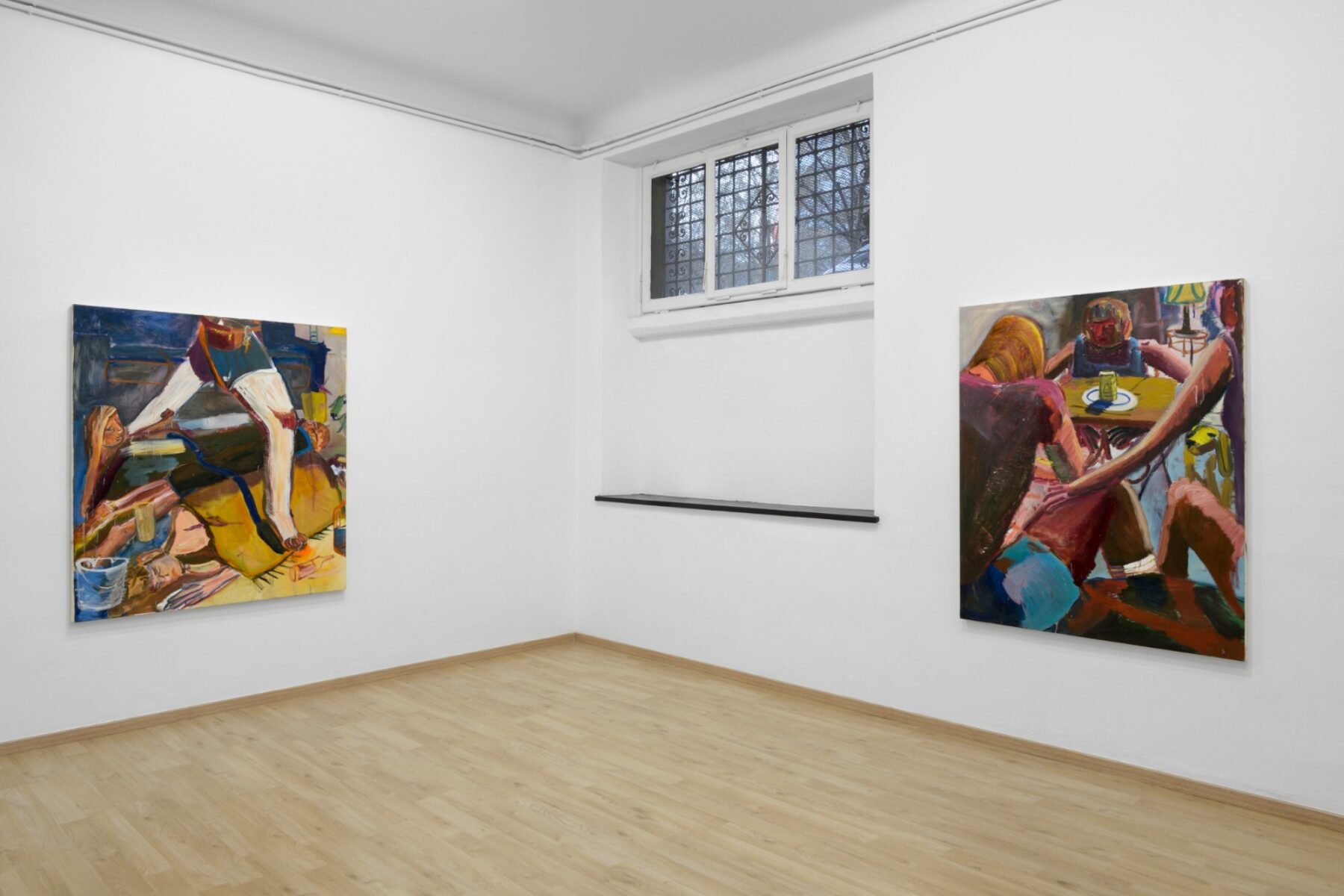 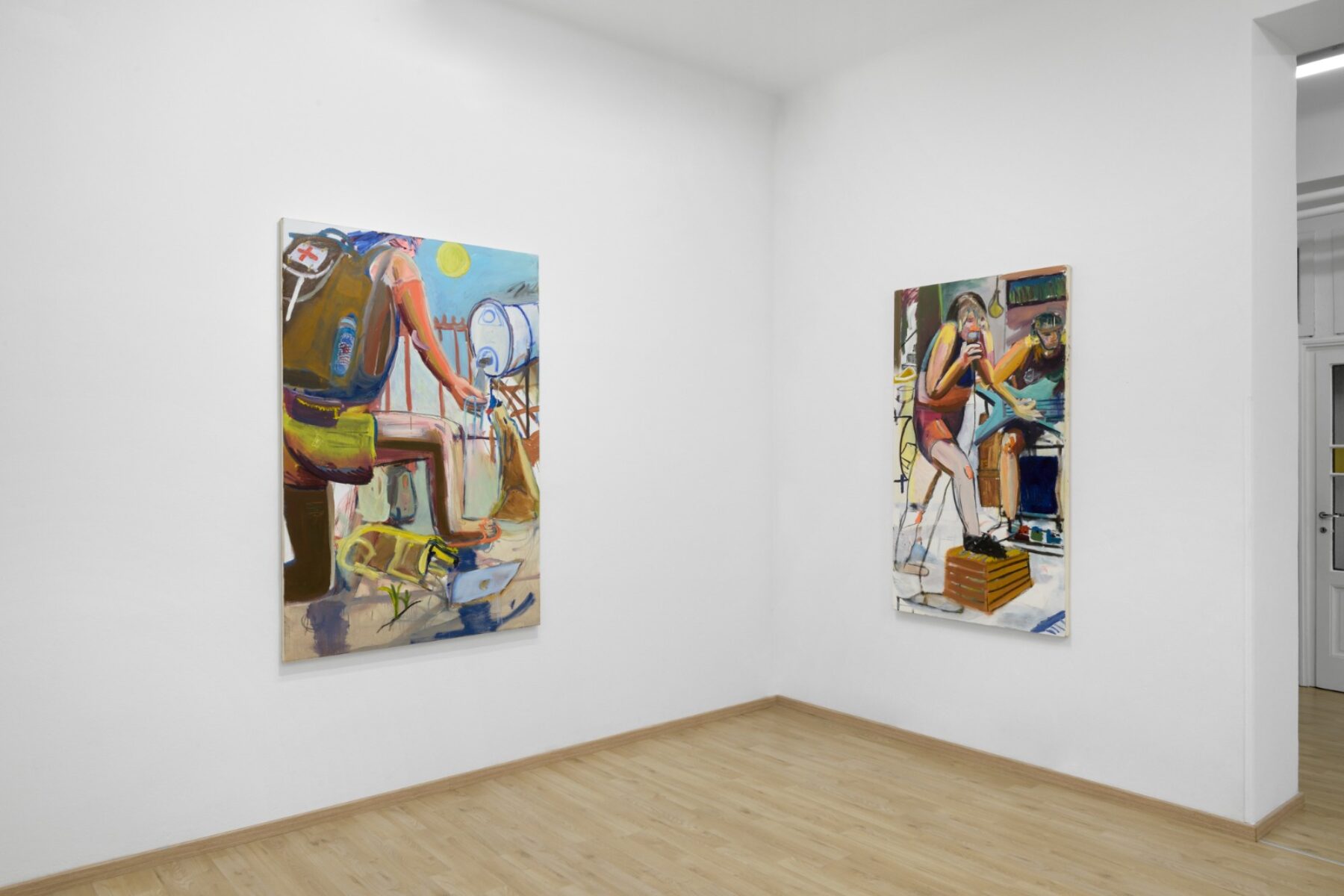 
Jacob Patrick Brooks’ painting features simple, ironic, caustic and wild figuration. His subjects are outlined by decided, caricatural traits that recall those of cartoons, and an anti-naturalistic colour, in which violent, impetuous brush-strokes, full of matter, are relentlessly overlaid. The subjects are clearly and firmly defined in his compositions, with irregular areas of colour driven to the greatest contrast, in which the human element is never missing. Warm and cold hues, as conflicting or distant colours are juxtaposed without any regard, in an irritating, brutal way. There are no shades, half tones, spaces for slowing or relaxation, as the colour is spread on the surface with such rhythm, impetuosity and incessancy that the observer is overwhelmed. This style, impassioned yet ironic, renders the small everyday events narrated by the American artist so surprising and interest-worthy. Spontaneously, yet unexpectedly, Brooks is able to surprise the observer but also associate them with the subject presented, bringing them closer and making them feel part of a story that unfolds as they watch.

Brooks’ artistic practice shows how both personal life and the daily occurring events, from the most negligible to the most emotionally intense, are an infinite source of stimuli to draw on for the creation of a work. The artist is, first and foremost, an author who has lived, who, that is, has used his first-hand experiences and stories, even if complicated and extreme, in his work. In other words, Brooks is an observer of the reality in front of him; neither alongside nor around him but exactly in front. He is always present in everything that chance has befall in front of his eyes; he is a spectator of the life and stories that continually happen. Paradoxically, we could say that he is a serial hoarder of micro-narrations and images that he archives and then uses and manipulates in the construction of other stories. Although, in his case, there is no precise correspondence between his affairs and the stories he paints, the baggage of his past is a powerful and fertile seed, from the narrative and psychological point of view. Thus, it may happen that our life unexpectedly overlaps with his, in the visual transposition of a story into that apparent fiction of the work. His painting is like a tailor-made suit that is not made from fabric, but from the most diverse pieces of his and our lives.

The expressive strenght in his work is measured and skilfully orchestrated as already experienced and psychoanalytically metabolised. Thus, the artist is concentrated on the reworking, on the drafting of a bare and raw story on the canvas, which is, however, an outcome of real life – not only as a subject but first and foremost as an emotional or psychic experience. His painting, in which, as already mentioned, first-hand stimuli are central, is a work of visual re-elaboration and stitching of experiences in an image. Situations alternate on the surface – those experienced with friends, and unusual or strange scenes observed directly in the community life of the poorer areas of cities, where people use their wits to find jobs, to eat or pass time. Thus, a small impromptu street concert, an afternoon of sun in the garden or an improvised cyclist delivering a bag can be seen one after the other in his canvases. But you are also drawn into passing an evening with friends, making it part of a scene in which a hand suddenly strokes a thigh in a probable invitation to completely unexpected pleasure.

Brooks’ painting is always full of narrative tension, vivid, grouchy and first-hand – it’s incisive and cutting like a Raymond Carver story, in which the reader accidentally ends up identifying with the first person narrator and sees the world like them. The composition is fundamental and intuitive. The narration is minimal, succinct and anti-rhetorical, permeated by sharp, spontaneous humour. The visual elements surrounding the human figure given by the artist, for example a can of beer, a tray, a container full of water or a bag filled with something, could lead a subversion of the action. An observer of the work often feels that something is about to happen. It’s difficult to imagine what, as the potential energy is felt but not where and how it will emerge. It almost seems cinematographic, where the items scattered on the scene are the elements that could trigger a change or, as in a Jim Jarmusch film, create the sweet melancholy of daily life. Thus through his syncopated rhythm Brooks highlights urban life with all its realistic, poetic and perhaps subtly political facets. And shows us a humanity that only lives for the moment, apparently without expectations but at the same time not despairing that, sooner or later, a change may happen.