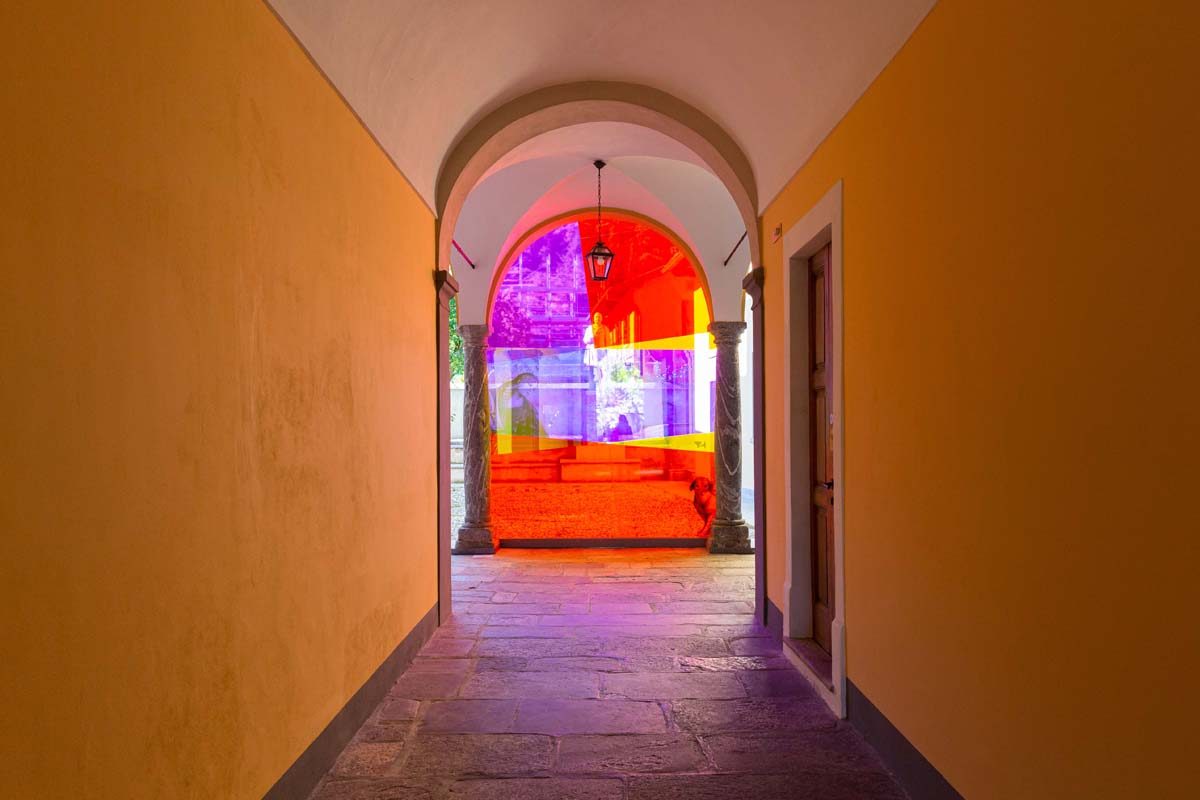 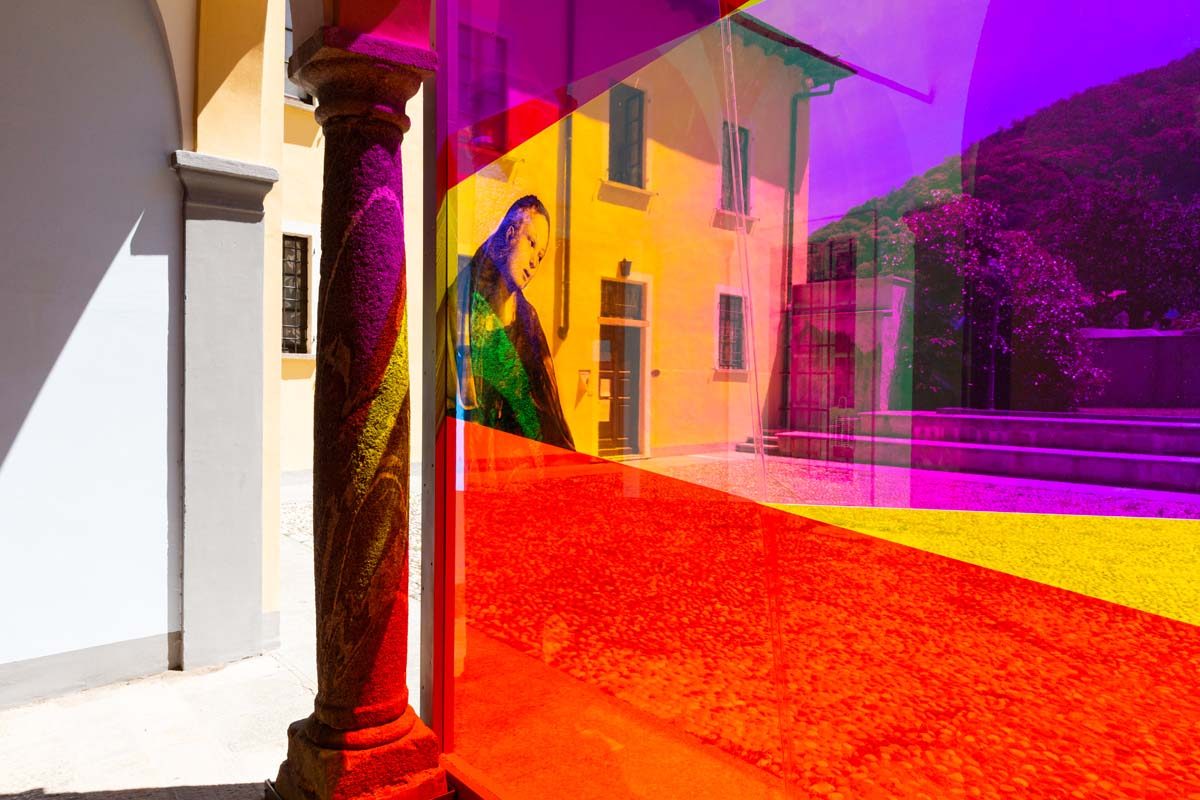 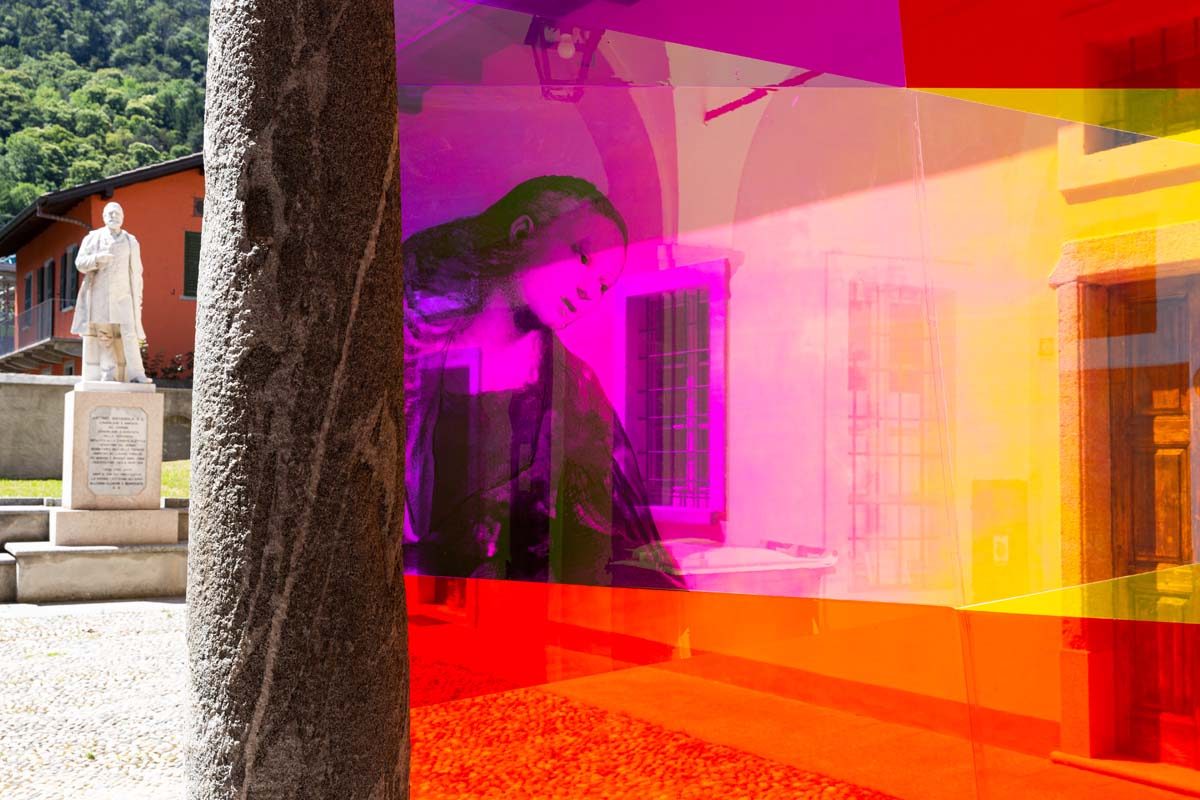 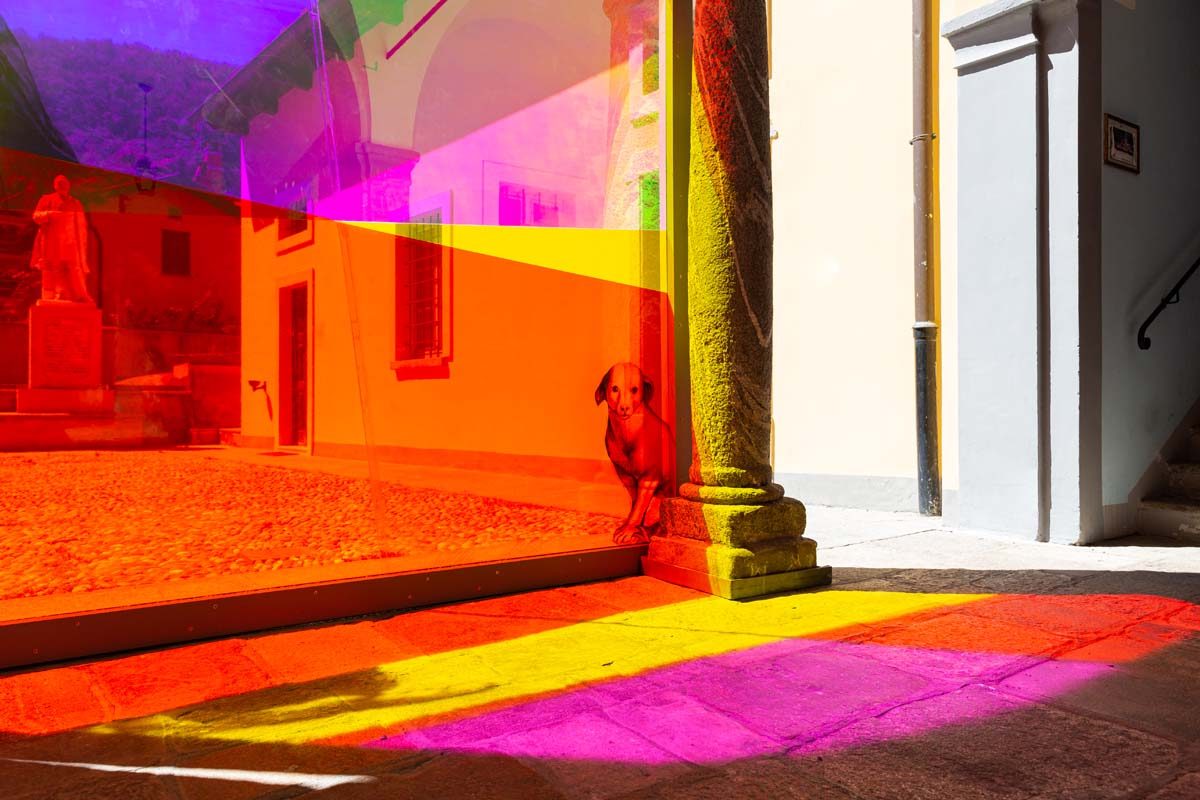 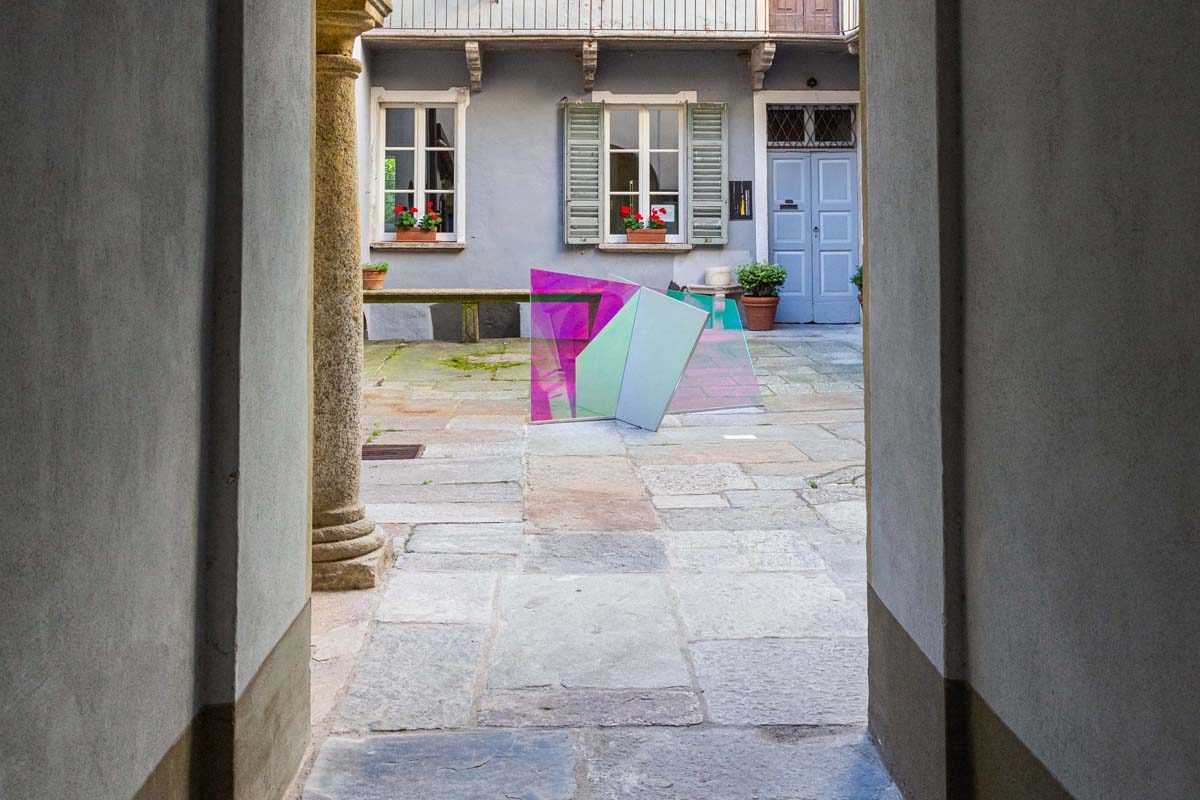 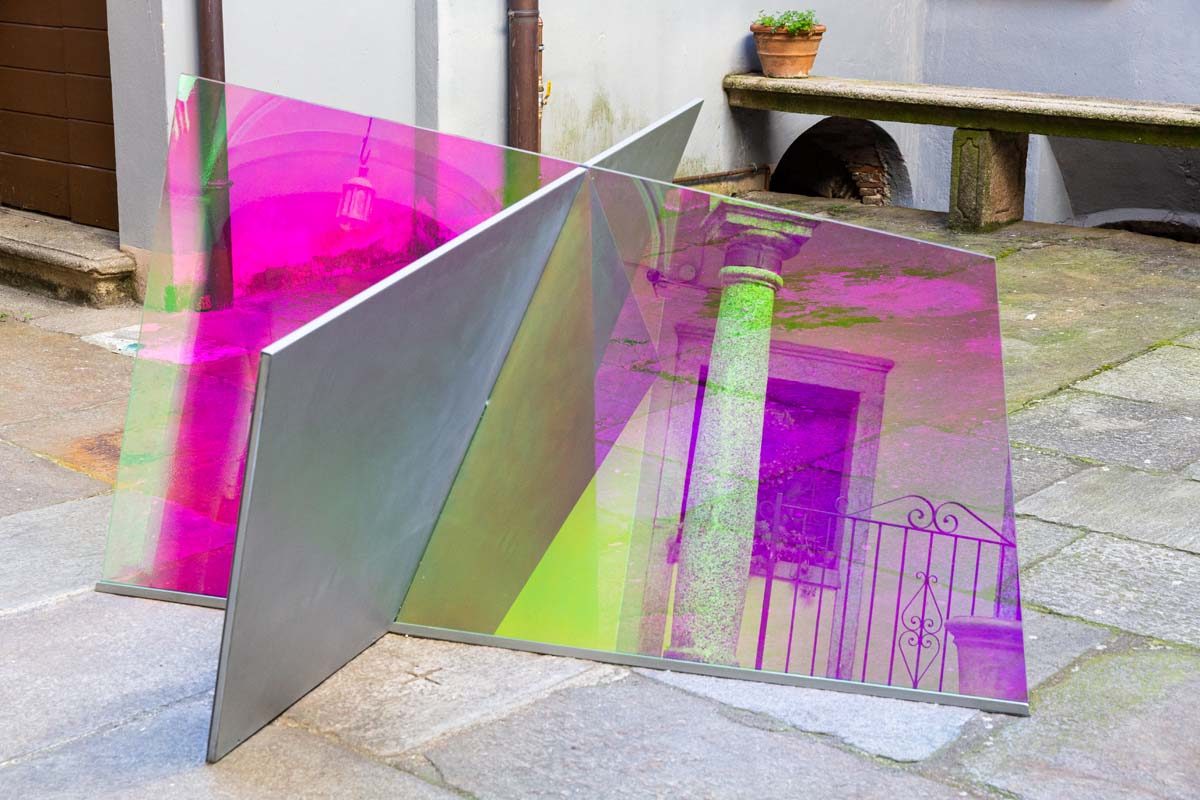 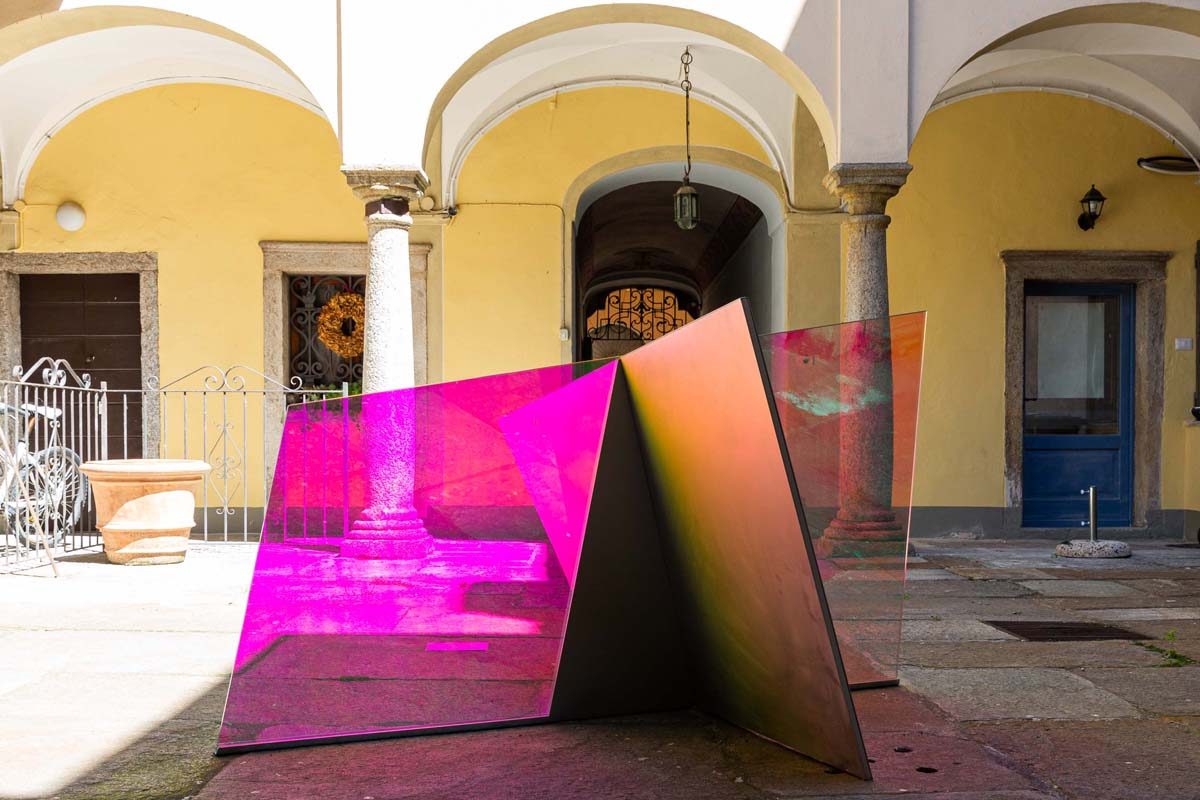 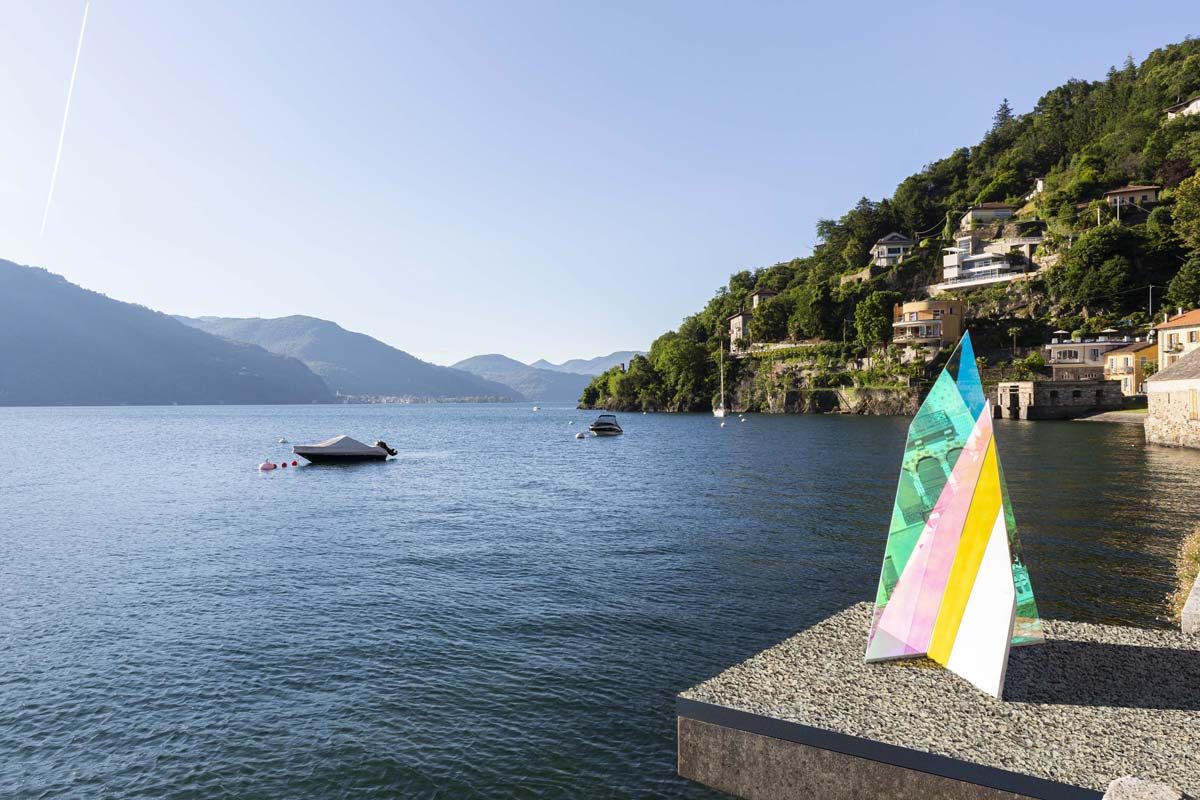 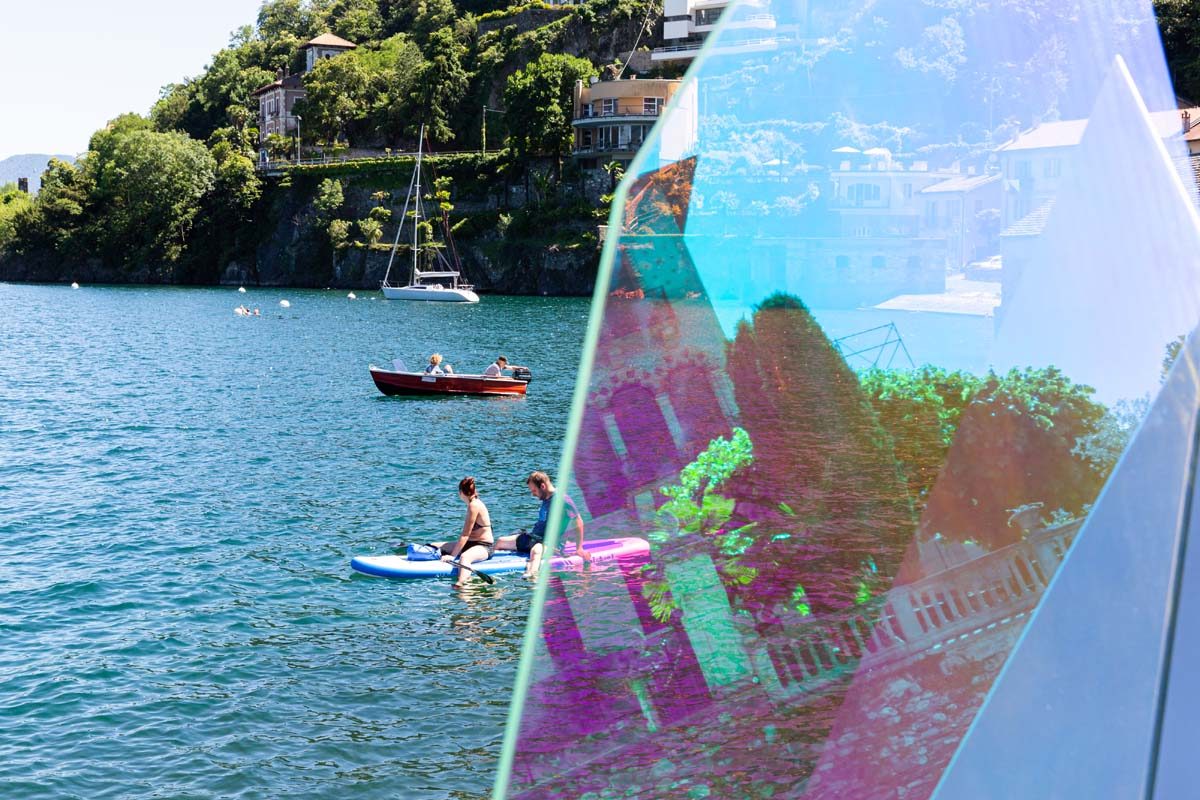 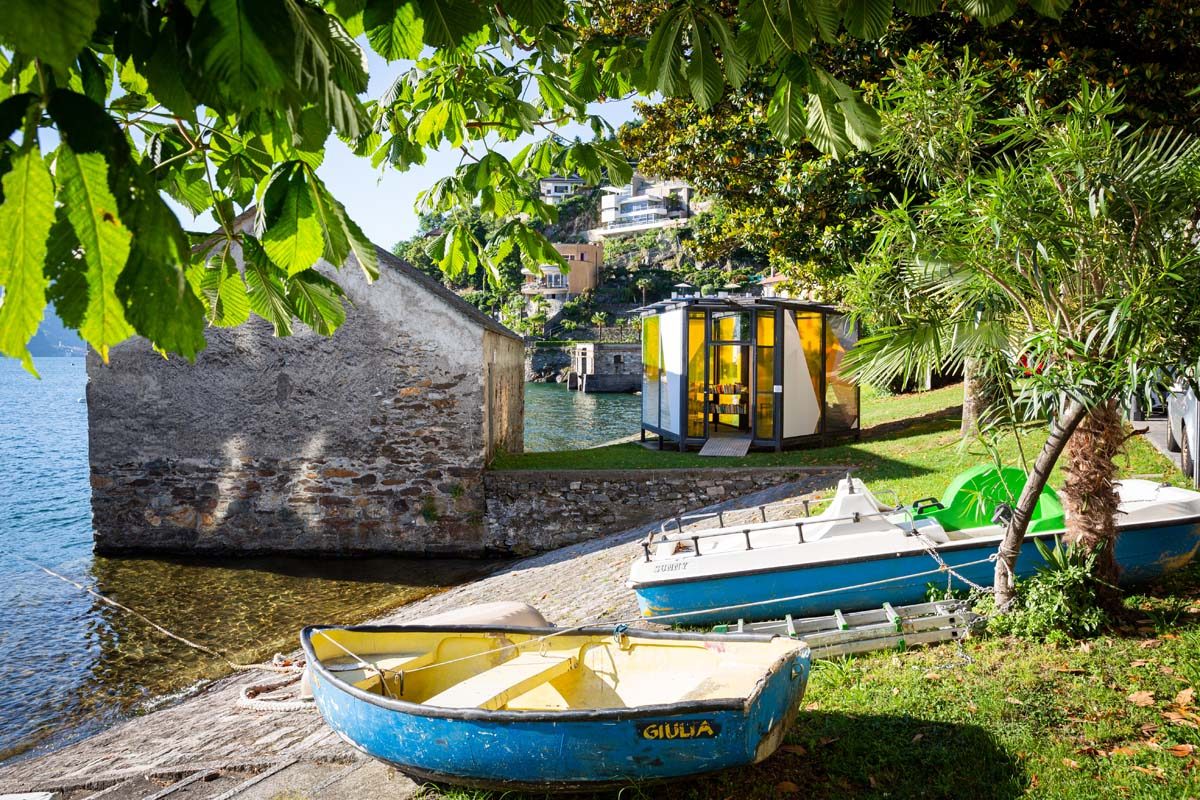 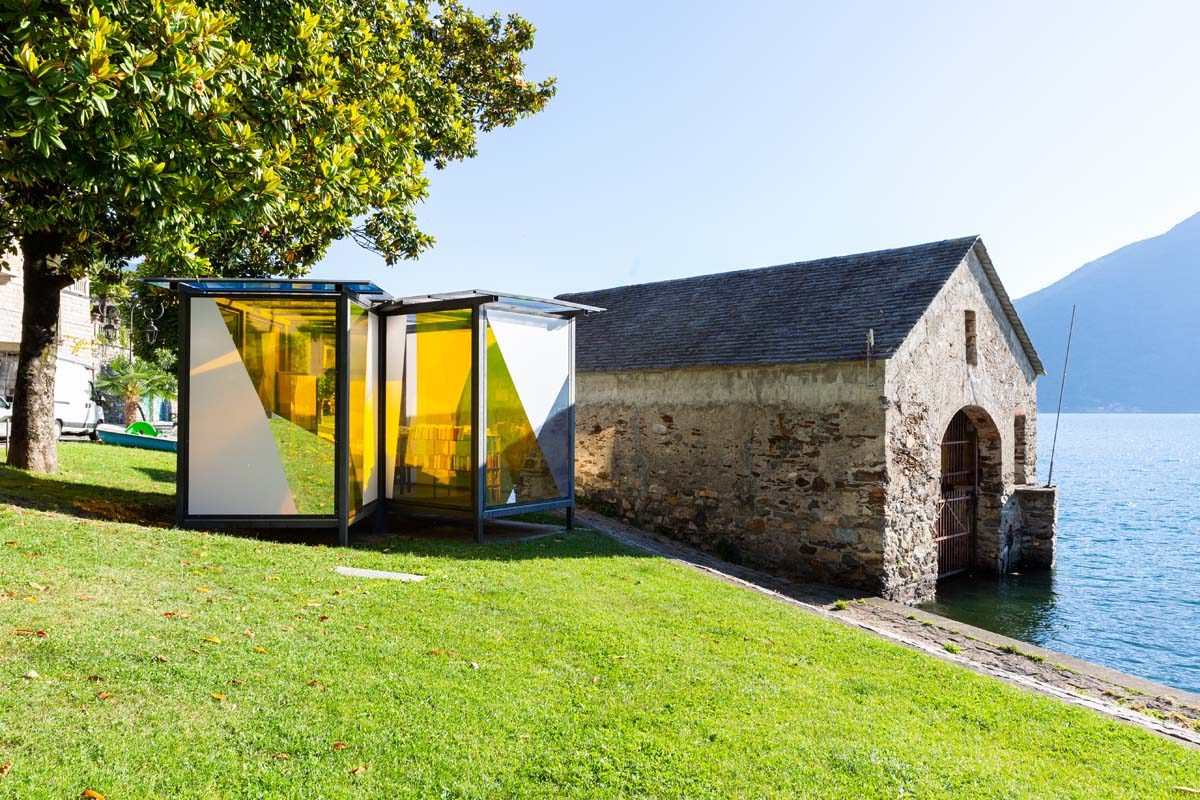 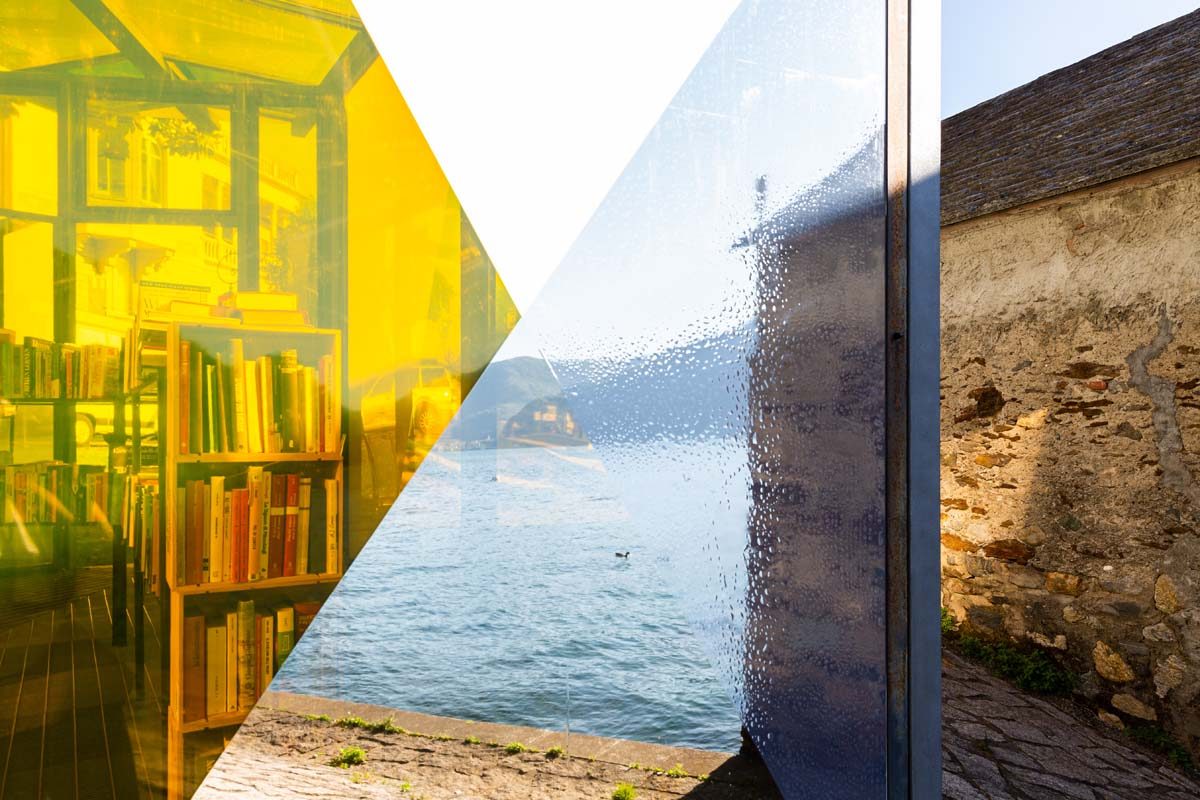 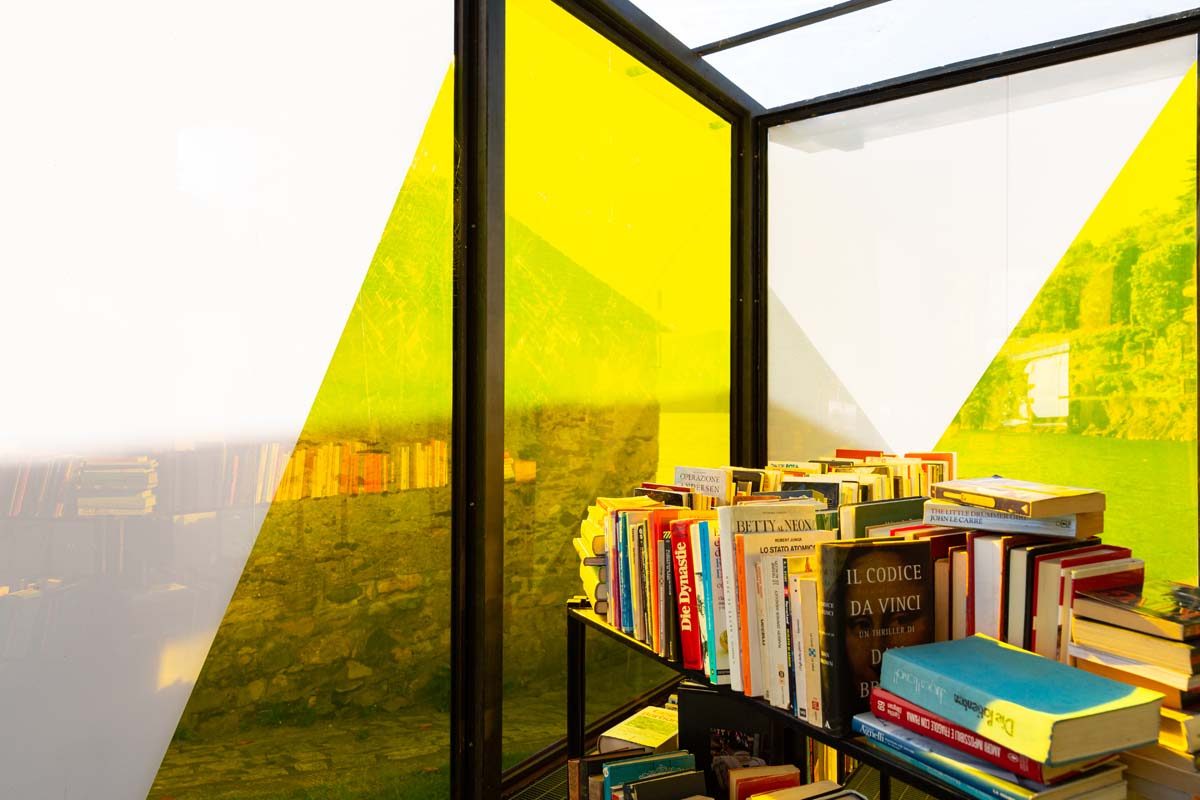 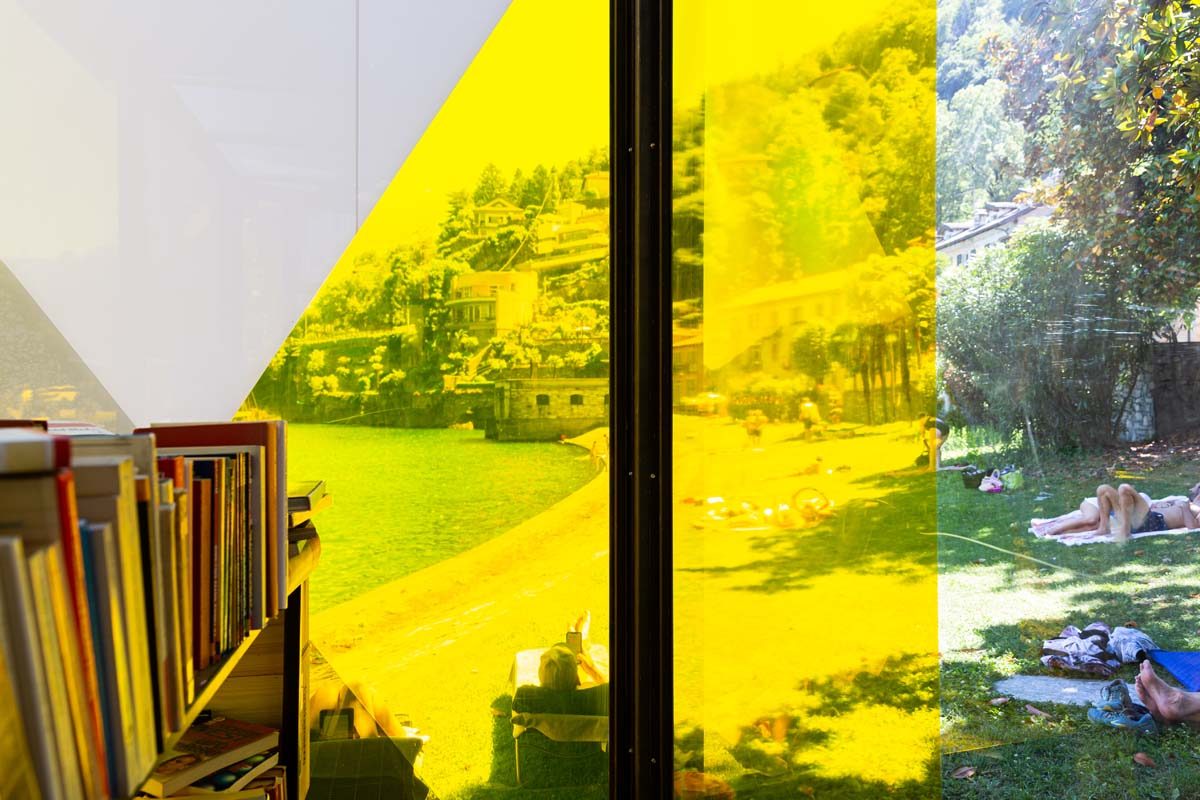 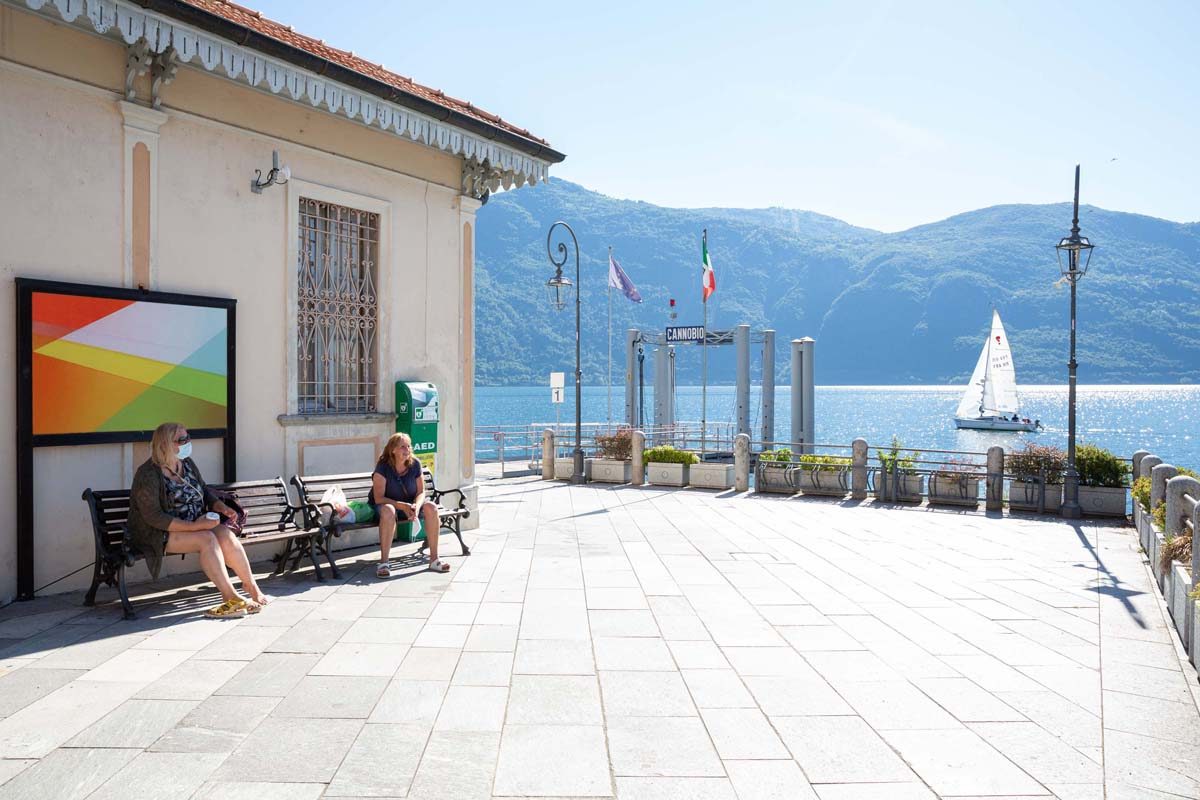 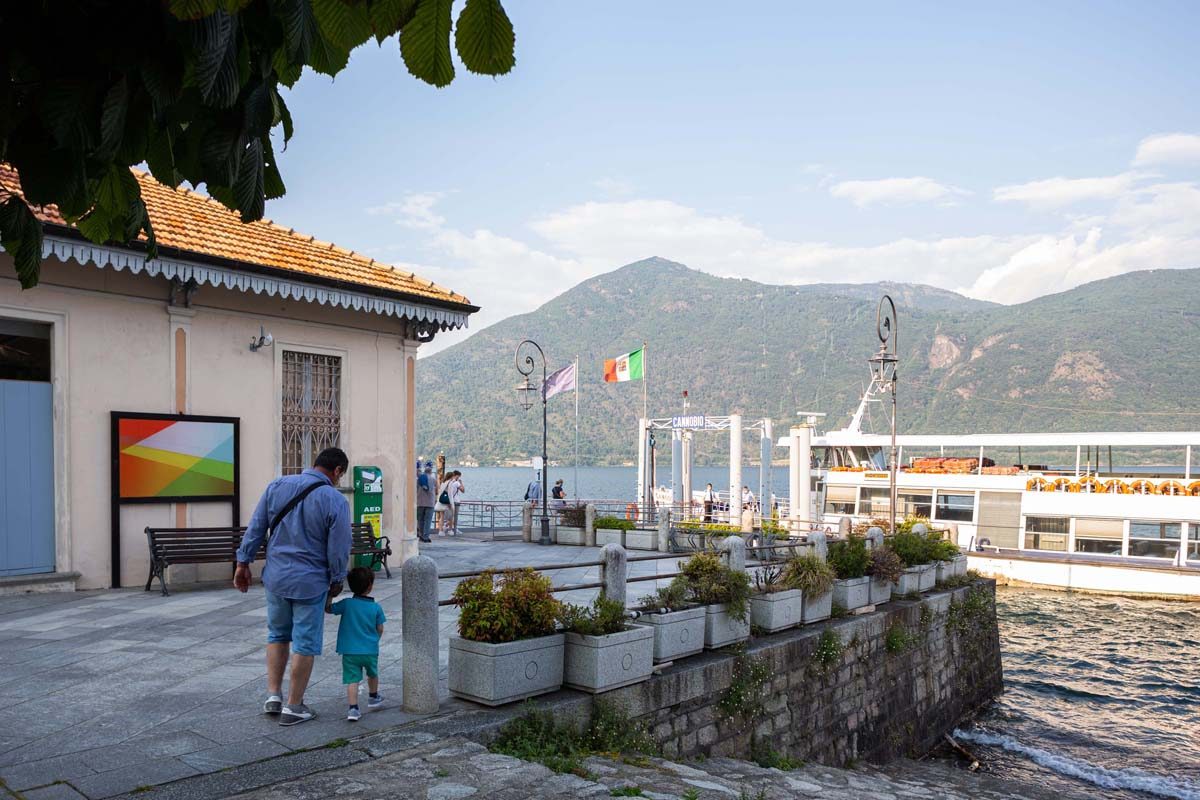 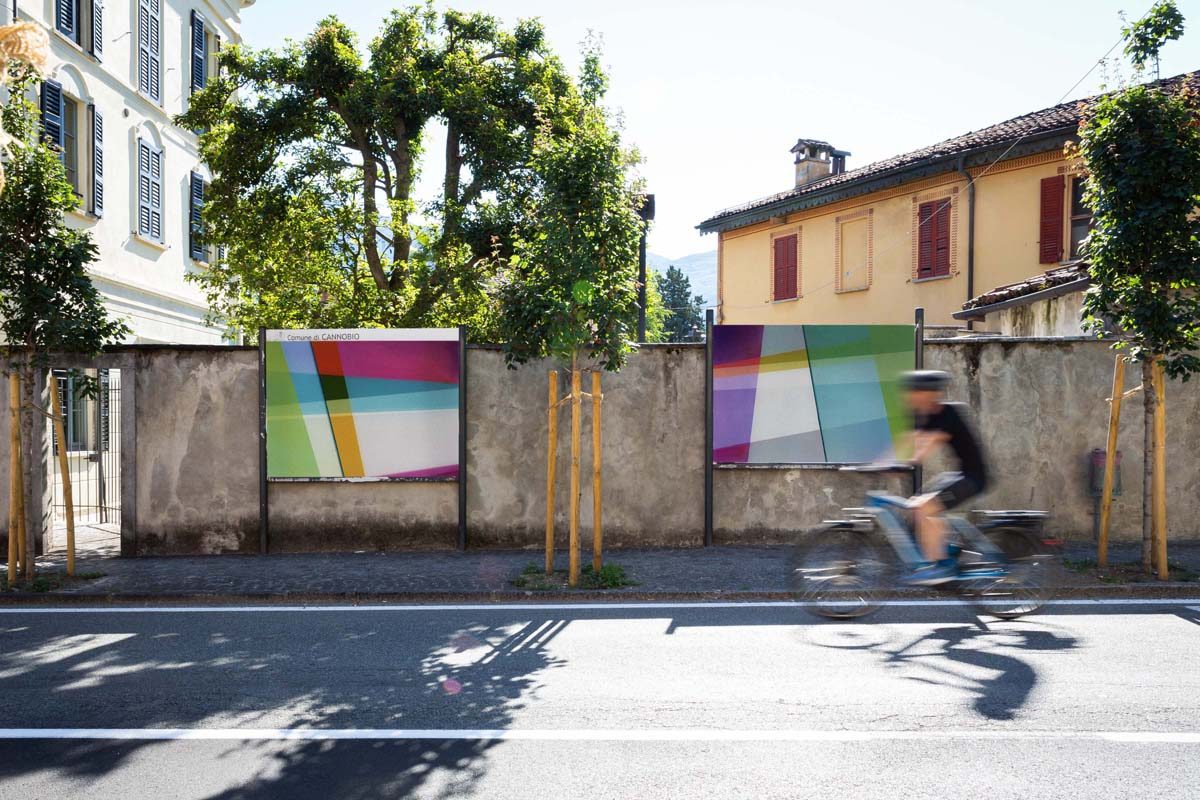 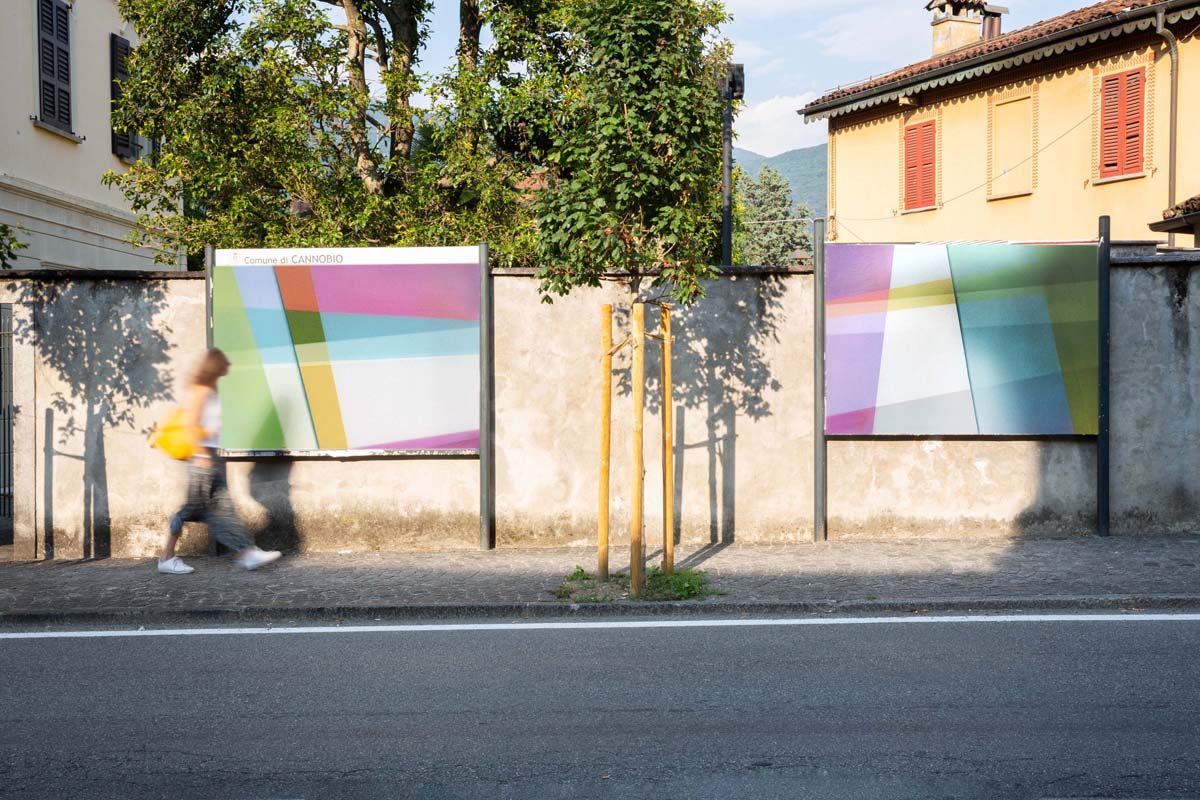 The show of Matteo Negri Amori estivi proposes six works in the city that range from sculpture to artistic poster, from site-specific installation to intervention on urban area. The show, which can be appreciated while walking, thereby creates a novel path: a widespread exhibition that links the centre, the courtyards and the lakefront. Amori estivi (“Summer loves”), whose title evokes the lightness of passions and romantic events that are experienced and fade away over the course of a season, stems from the idea of placing in the urban fabric works capable of triggering a dialogue with the architectural context of Cannobio and the suggestive natural landscape.

The research of Matteo Negri aims to analyse the perceptual aspects of colour and the interactions between light and surface, thanks to the use of such materials as metal, glass, mirroring and iridescent films. In his works, characterised by an incisive and essential geometry, planes and volumes evince transparent or reflecting elements allowing the work to interact with the environmental context, pushing the observer to move, in a continuous negotiation of the observation point.

The project ideally kicks off at Palazzo Mandamentale, for which Negri created Thinking of Gaudenzio, an installation in PVC and transparent films that fit in between courtyard and colonnade. The work stems from the observation that, in a completely random way, the dimensional ratios between height of arches and width of intercolumniation are the same as the famous altarpiece of Gaudenzio Ferrari, exhibited at the Sanctuary of SS. Pietà a few hundred metres away. Thanks to this intuition, the artist has created an intervention that geometrically transports some of the construction lines of renaissance work, which are transformed into colour and transparent polygons that interact with the context, modifying its perception.

For a city courtyard and the lakefront Negri has imagined Piano Piano, a metal and glass sculptures covered by mirroring and shimmering films. In the works, portions of plane intersect in a non-orthogonal manner, whereas iridescent surfaces generate transparency and reflection effects that fragment the unity of space. Even in Summer loves (readings), created by coating with coloured films the plexiglas walls of the stall earmarked for book-crossing, the artist breaks up the vision of the lakefront context into transparent blue and yellow blades. The observer who enters the space, looking out, is accordingly placed in a position where he can see the landscape filling itself with colour. At the same time, however, the passer-by who stands outside captures landscape portions being reflected on the external surfaces, visually combining with the volume of the construction. Inside and out thus exchange places continuously, exactly like the books that readers daily leave and collect as gifts.

Negri’s latest intervention concerns the communal spaces of advertising billboards, which, throughout the summer, in rotation, will host the unpublished posters designed by the artist. Postcards from Saturn are in fact posters that propose unusual and unsettling geometries compared to the urban context. The citizen, the casual passer-by and the visitor to Cannobio are thus placed on the same level, sharing the condition of observers who chance upon something unexpected and alienating compared to the ordinary visual horizon.
Daniele Capra