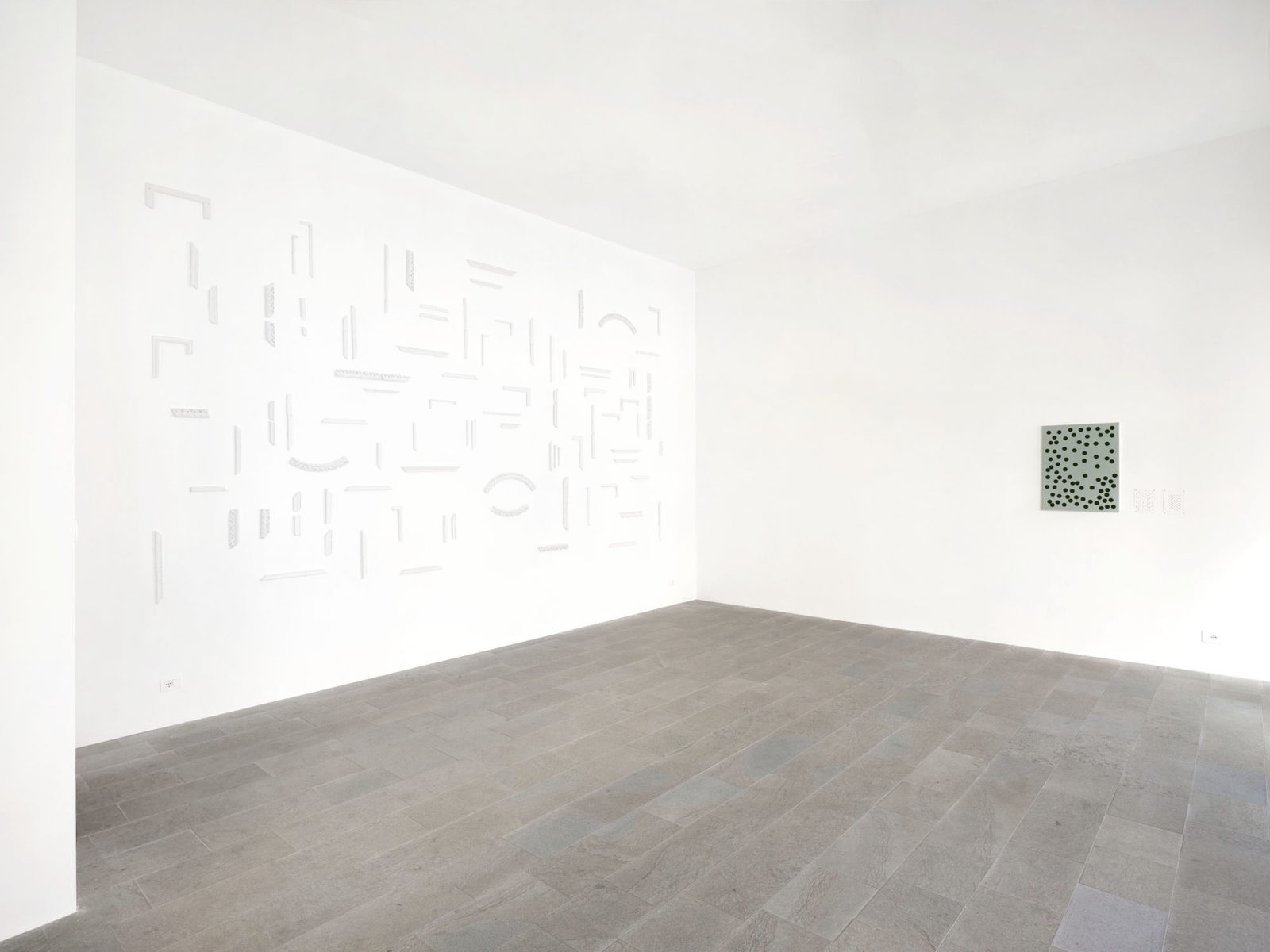 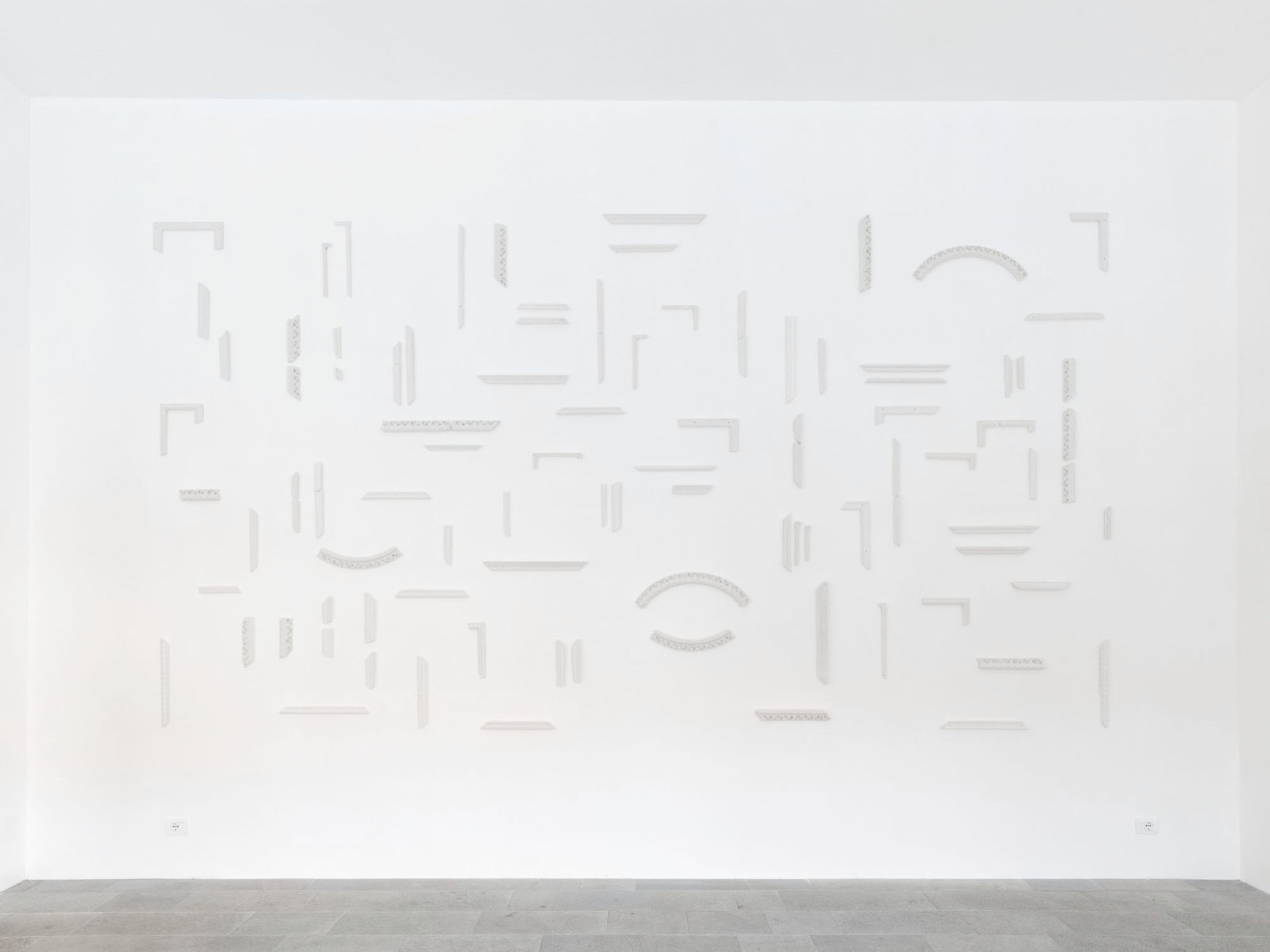 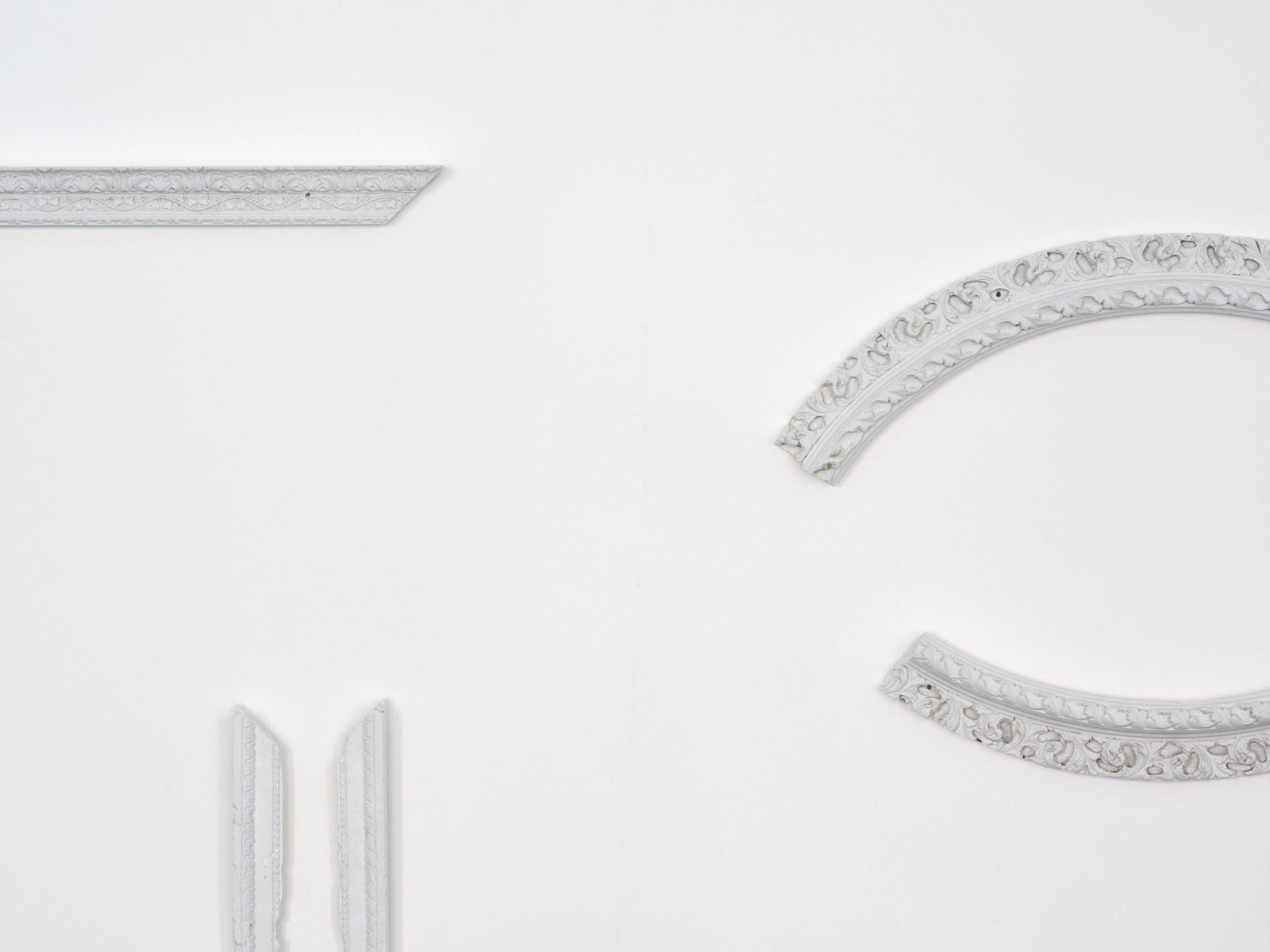 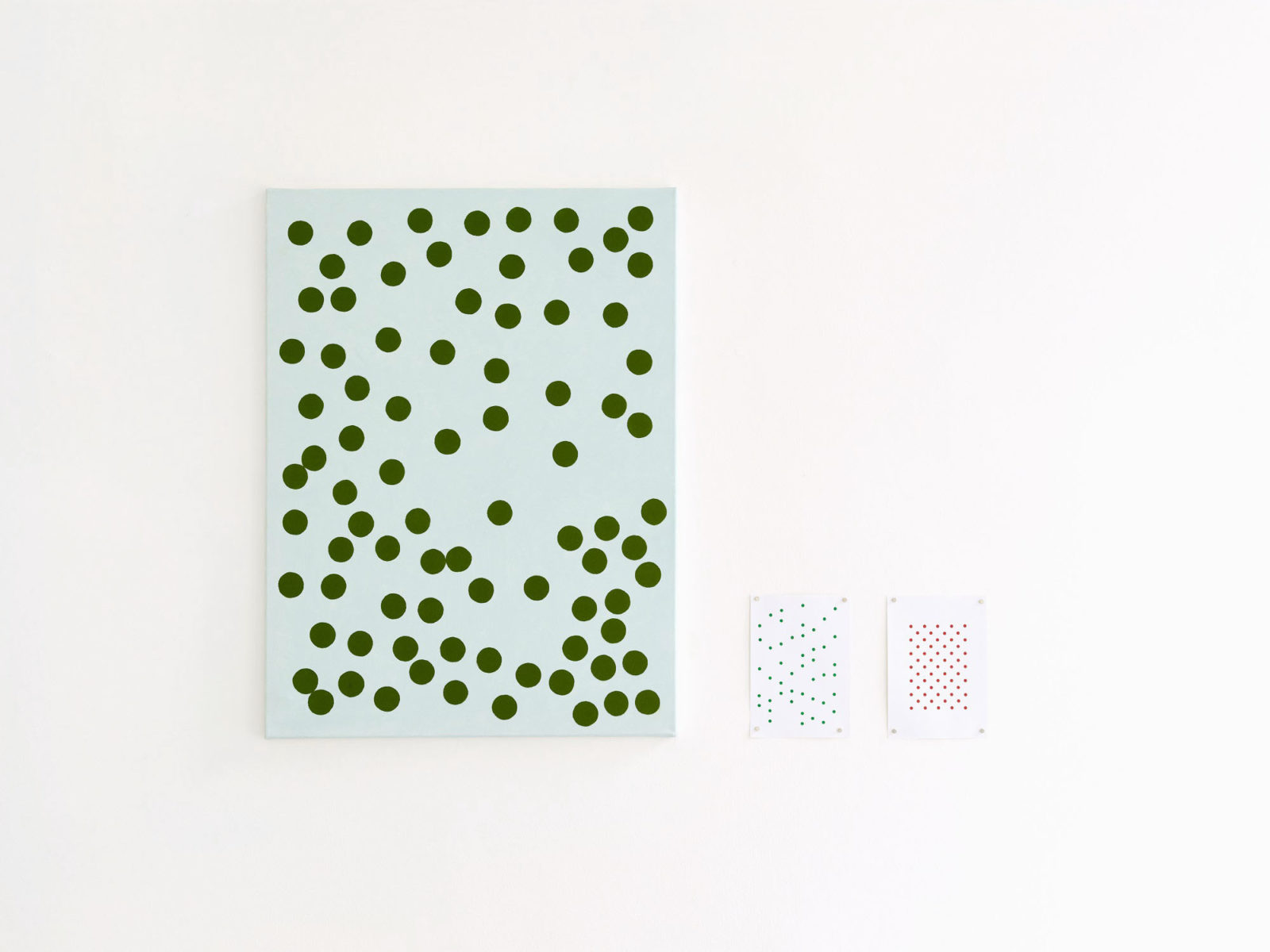 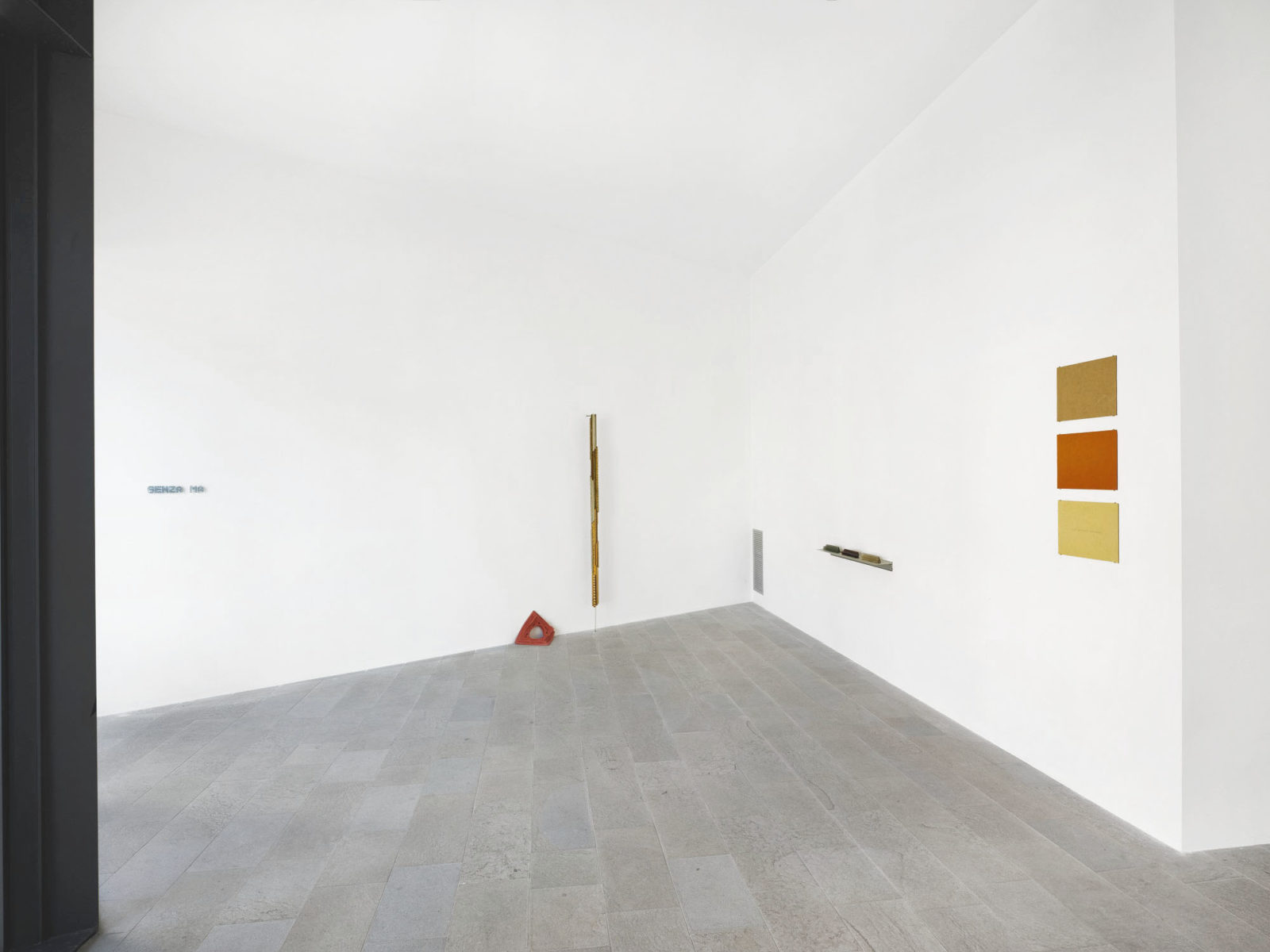 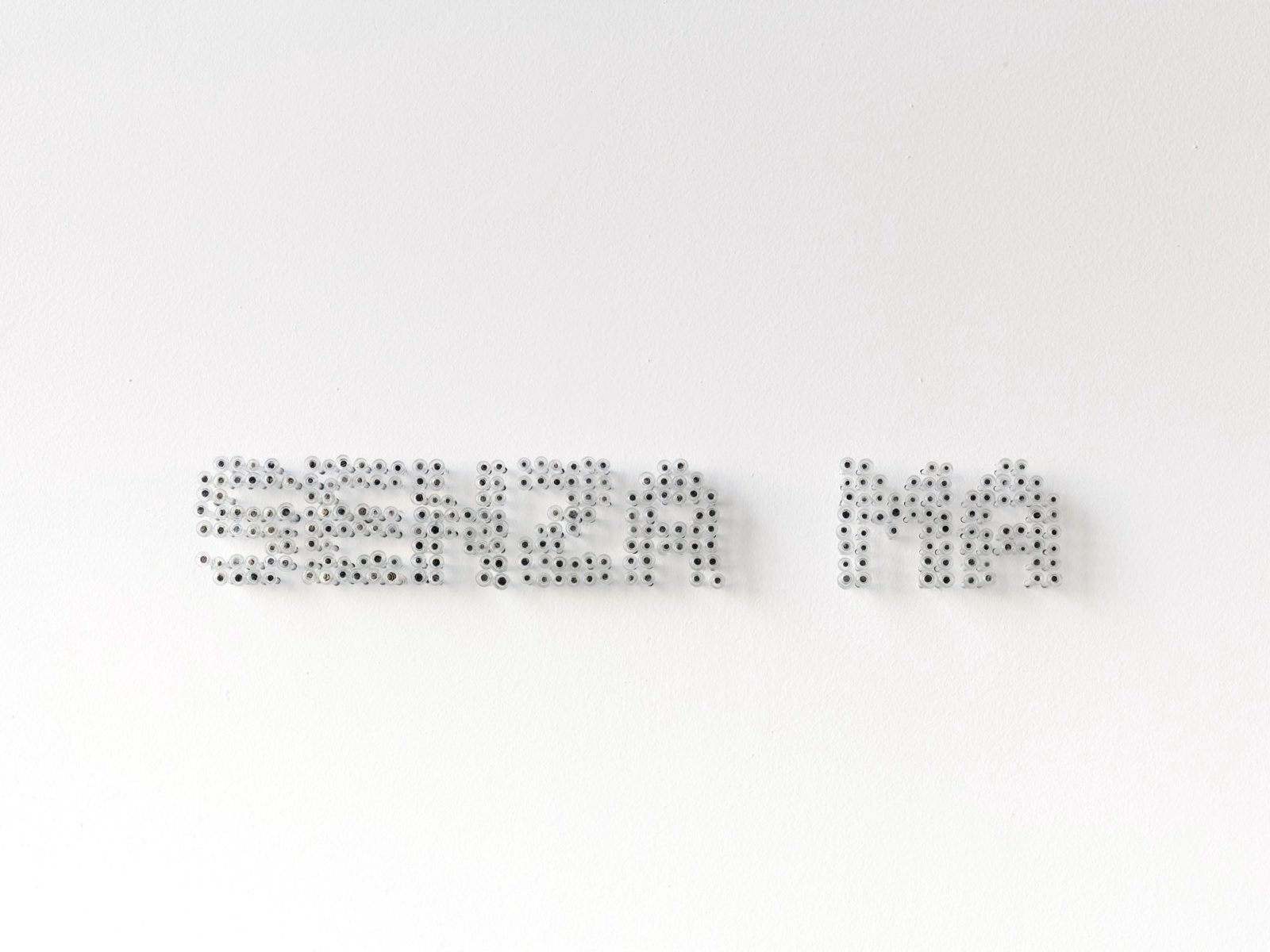 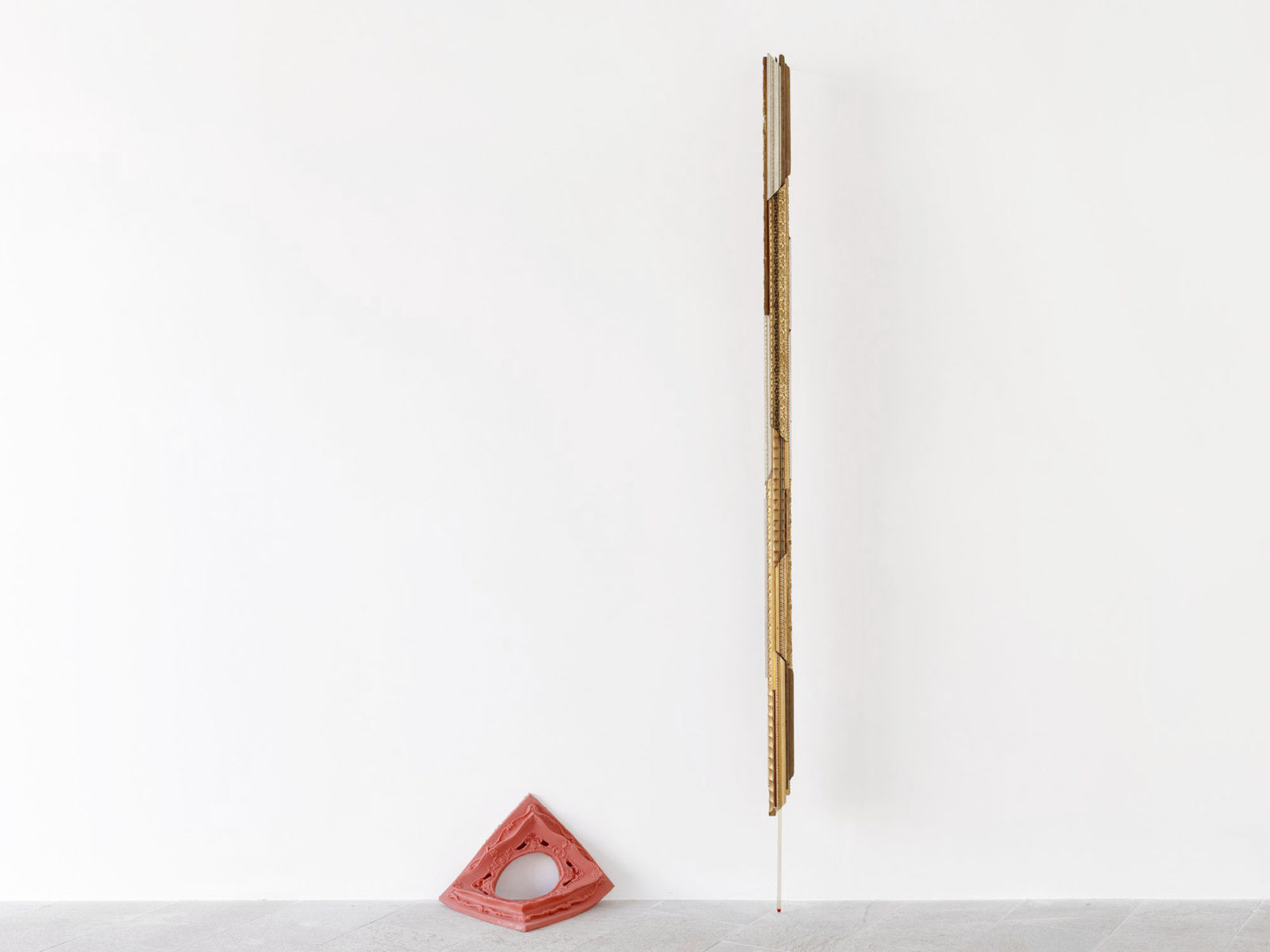 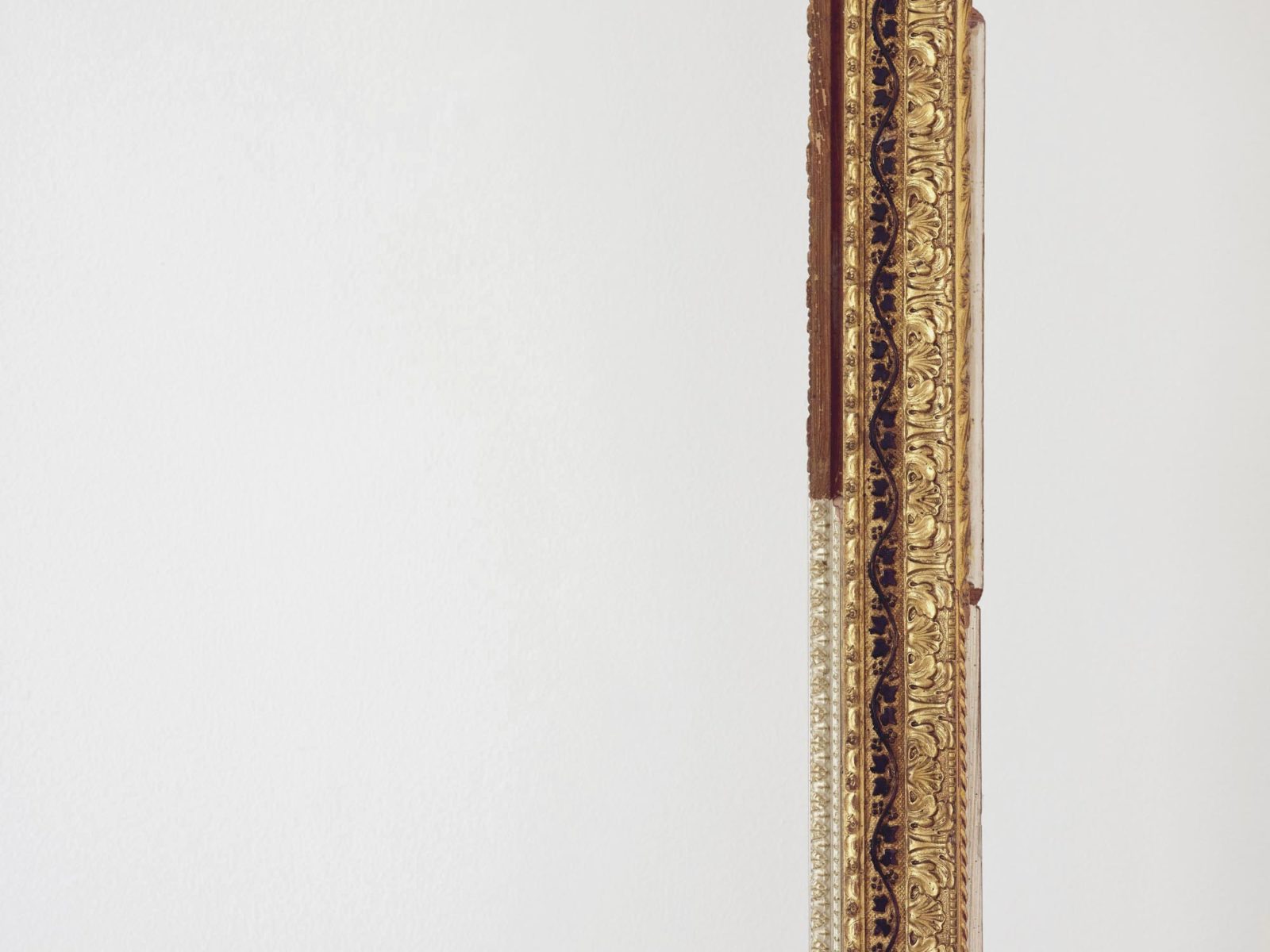 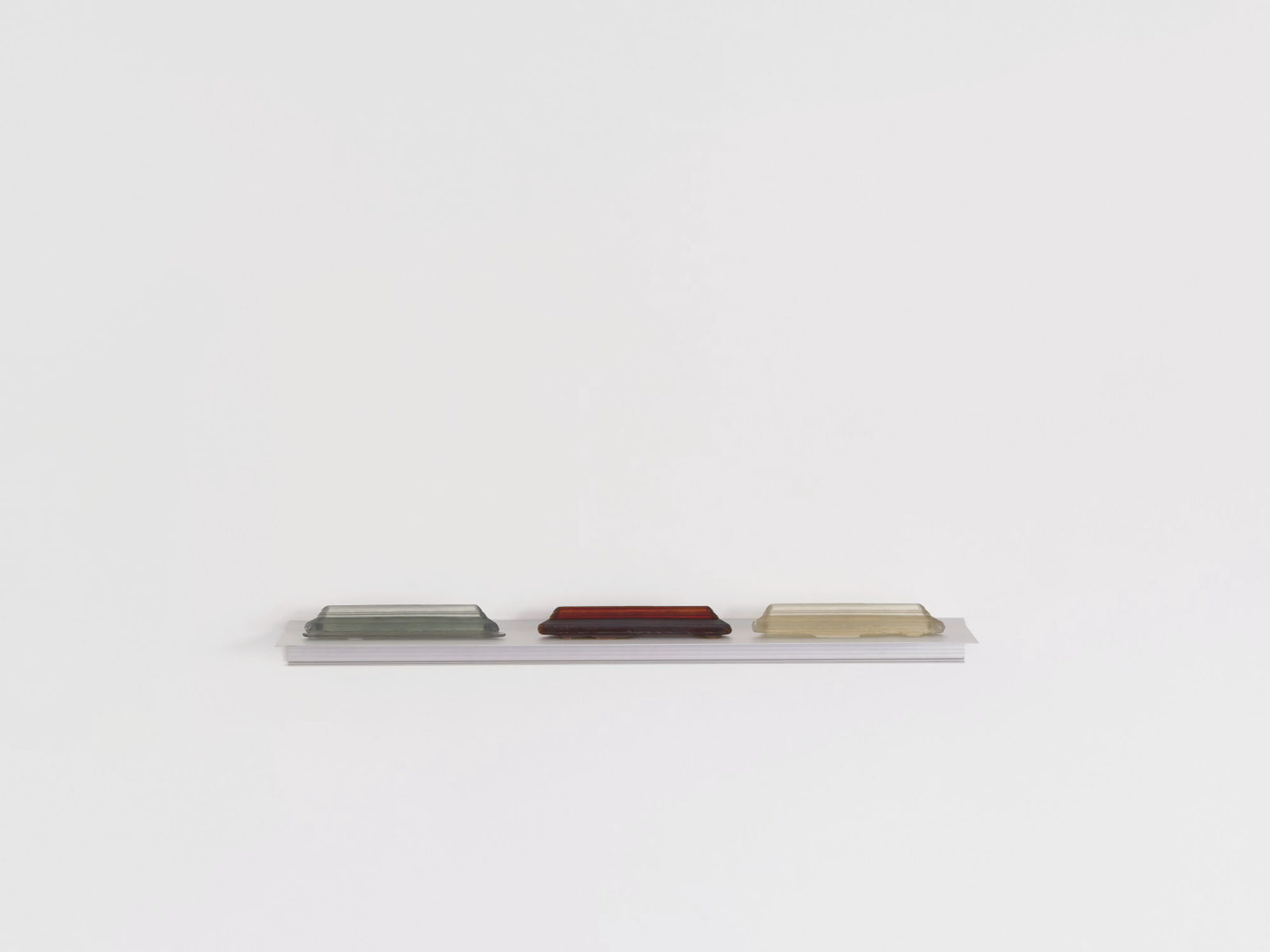 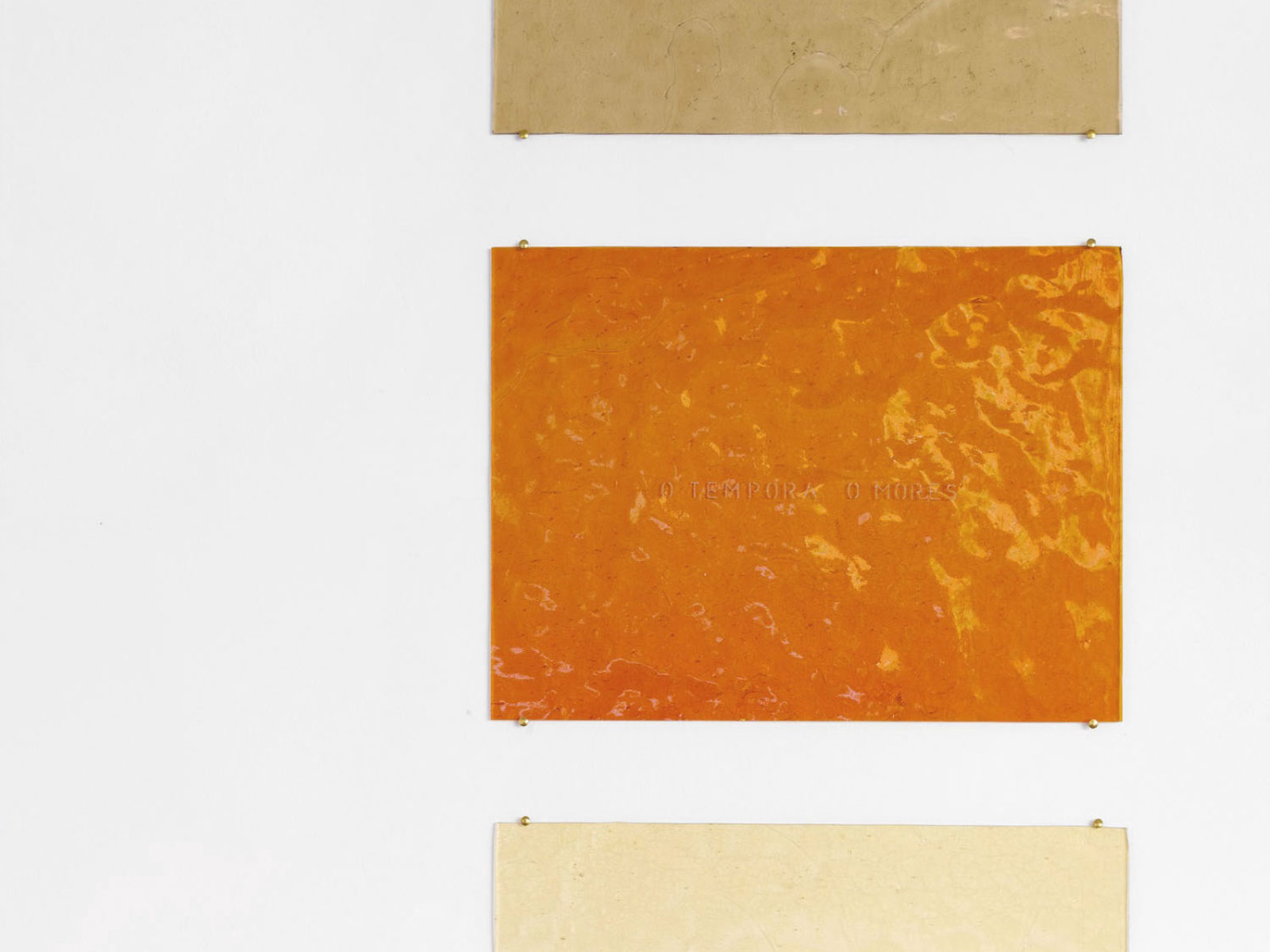 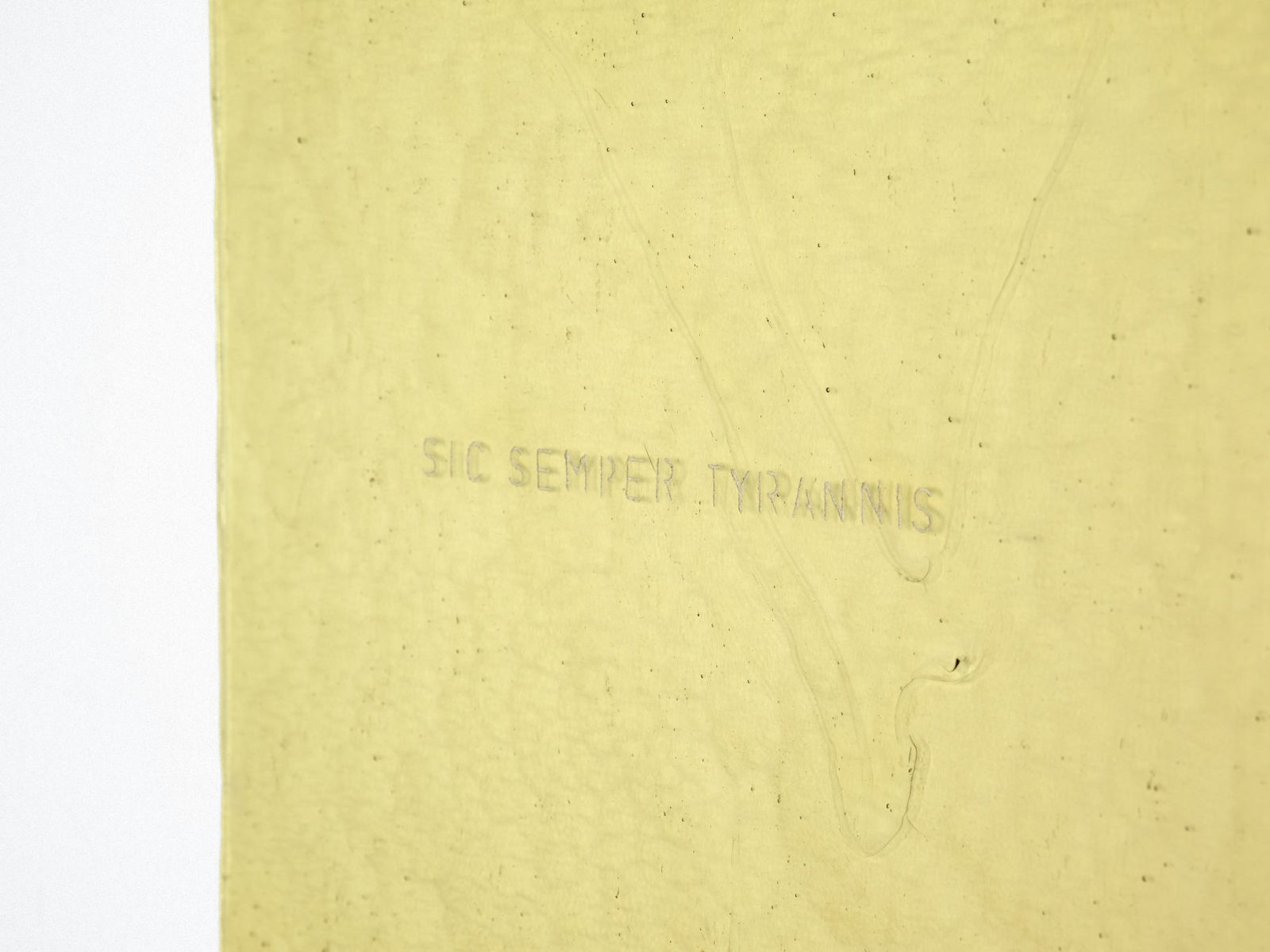 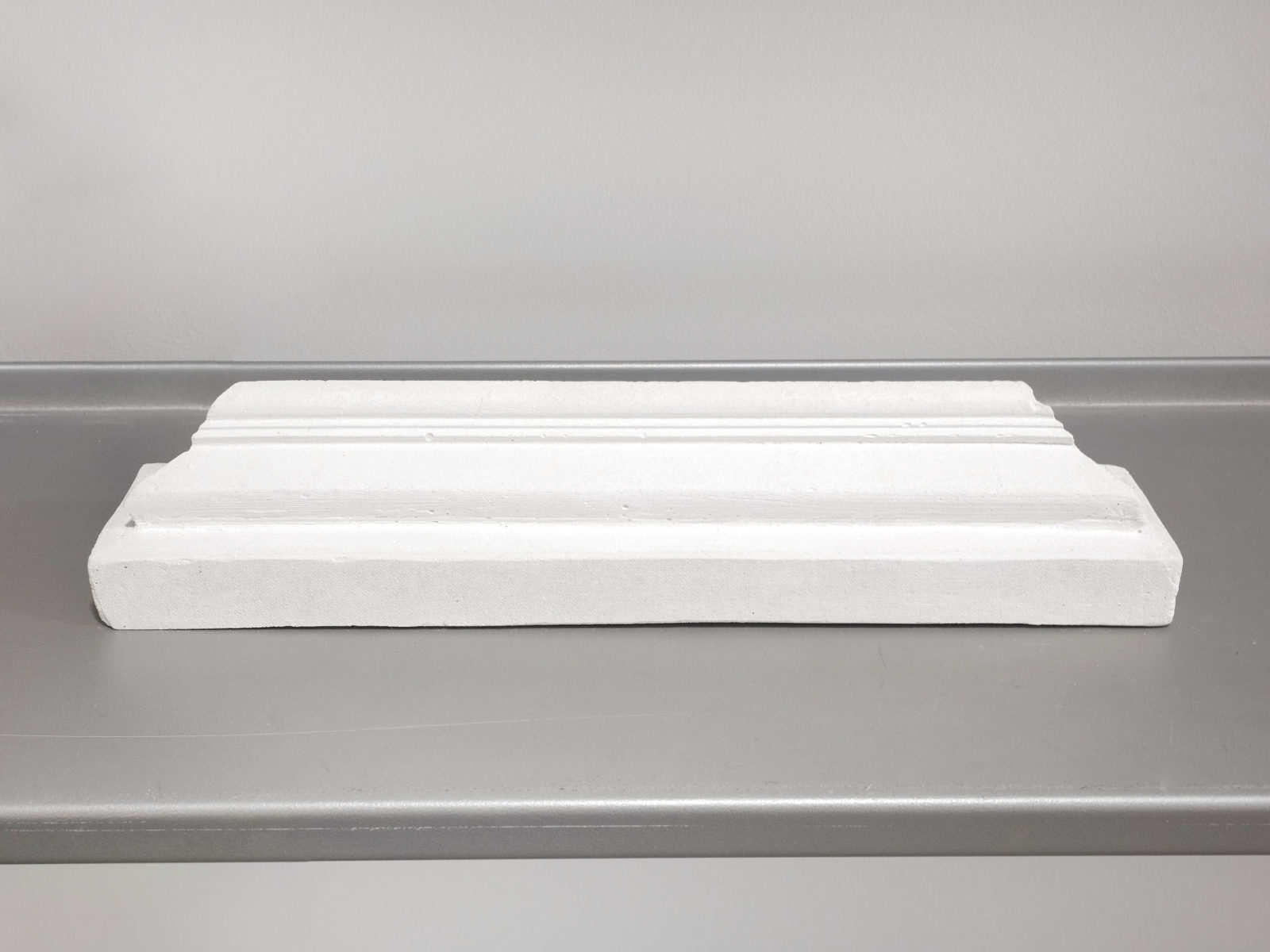 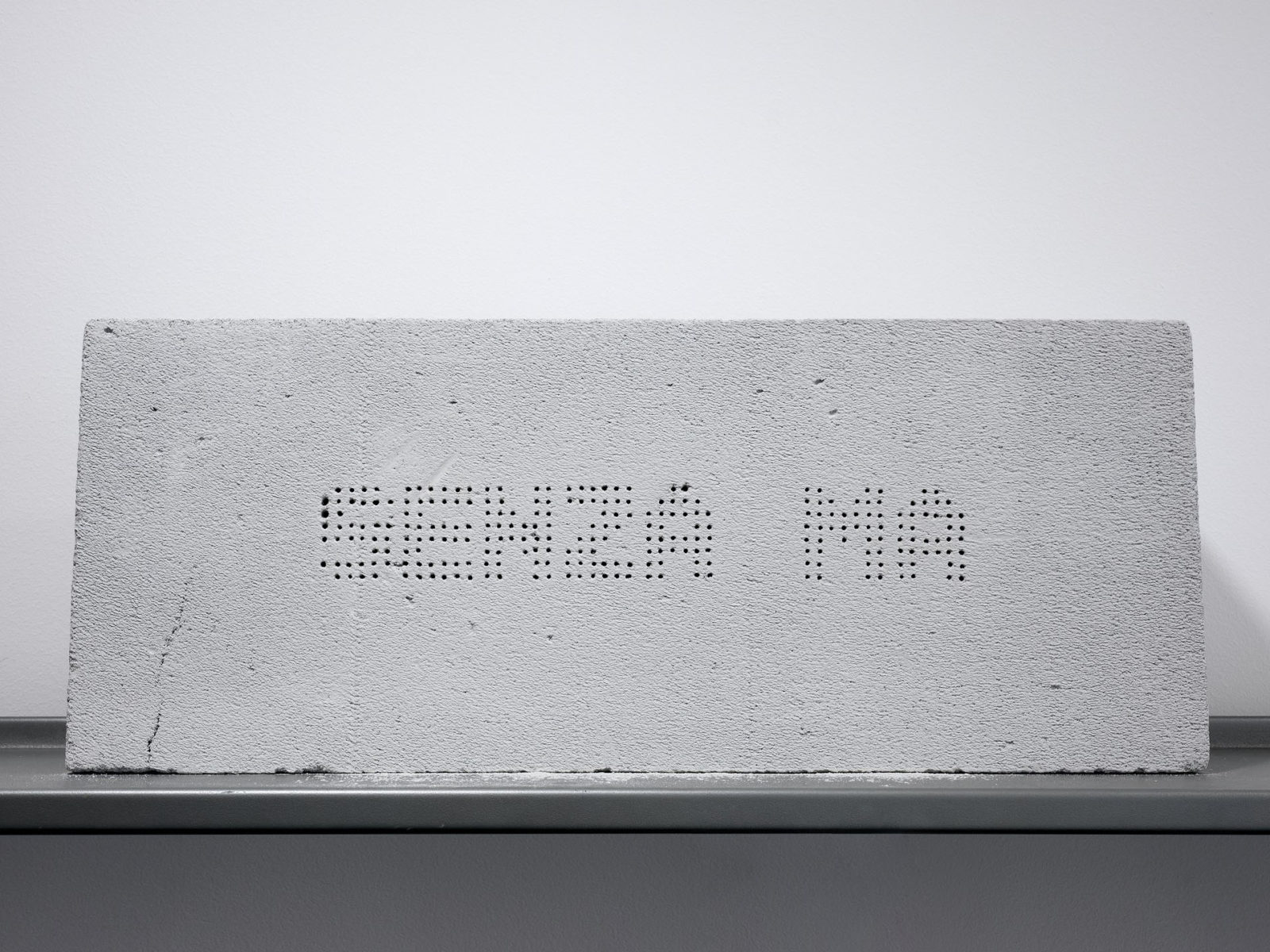 
Dismantled, deconstructed, disassembled, and reduced to bits and pieces: on the wall is a frame that frames nothing. There is nothing to delimit, protect, enhance, and there is no work to use it as a support. The frame is white, opaque, and from a distance it seems to bland with the equally white wall. It is necessary to get closer in order to see the details, the scratches, the curls, and to discover that this is not a single frame but a group of different kinds of shapes. So the frames have different thicknesses, designs, and different degrees of finishing. In their apparent banality, the fragments scattered, in part in an orderly manner, convey the idea of an absence of strength, of an emptiness of intentions. We feel the lack of that fascination that usually haunts the ruins of a glorious past. These plaster fragments, instead, have all been re-semanticised: they have to be recomposed and given a new sense; there must be an inquiry into their intimate origin, value, and their meaningfulness on a real and symbolic plane. Because these fragments of frames make up a concept that, perhaps, is no longer there and has been dissolved, chewed up, and swallowed by history. In fact, today what is the “fourth estate” that they attempt to represent?

The expression “the fourth estate” was used for the first time during the French Revolution to indicate those excluded from political life, and not belonging to the productive and commercial bourgeoisie or the professions (which instead made up the so-called third estate). In fact the fourth estate consisted mainly of the poor and the workers without any rights, and the expression, at the beginning of the 19th century, ended up indicating the proletariat in general. With the evolution of industrial society and of nation states, the fourth estate was to become one of the constituent parts of modern mass society, subject on the one hand to the great political-economic transformations of modernity, and on the other being its driving force. These in fact were the years in which there began to be registered “a significant role of the masses in the implementation of political and social life, but also their increasing homogenisation, loss of individual autonomy, atomisation, conformism, and ease in being manipulated and hetero-directed.” [1]. The arrival of industry, of an economic system based on the market, consumption, and the application of productive models based on the principles of Taylor and Ford, encouraged the enlargement of the fourth estate to the masses. An even greater impulse was determined by the First World War and the Russian Revolution, which marked the definitive entry of the masses into history, until then perceived with a capital “H”, in particular that of the military and of politics which for centuries scholars and intellectuals were mainly concerned with.

The IlQuartoStato project by Penzo+Fiore places at the centre of attention, in an interrogative form, and with a rare formal refinement, the idea of people, of workers, and of the masses, which do not perfectly coincide and which only with difficulty can be used as synonyms. And yet this cloud of meanings is indicative of something that is evading us, not so much for an absence of sociological method as, instead, because the focus of our attention is taken up by other discussions. Or perhaps because, in a far more able (and devious) way, there are people who purposely distract us from debating certain terms by imposing on us their own agenda, leaving us simply with a piece of frame that we do not know how to use and that we question about its real utility. And yet these arguments, abandoned in the ideological slush following the fall of the Berlin Wall, still exist: we must take care to imbue them with new meanings, previously unexpressed words and concepts, not to stop following this side of the discussion, and taking on only an apparent freedom. It is touching, for those who have taken to heart the social and political destiny of their own postmodern condition and who live in a post-capitalist era, to find themselves managing these pieces of white frame that cannot be recomposed, that no longer stay together because no one is bothered to adapt them to the changes of the work they once contained. They seem ideological residues that celebrate the failure of a political side – the left, Marxism – the thinking of which is however relevant and of which there is a great need by readapting and upgrading historical analyses to the variables of our times. It seems instead that they have won, the deceitful appeasers who have convinced us that the class struggle no longer exists. And instead, once the classes have been levelled down, the battle has only been transformed into another one because the fourth estate exists but has become highly liquid. And there comes back to mind the masterpiece by Pelizza da Volpedo, which the show is indebted to.

The painting Il quarto stato [2] was bought in 1920 by the Milan city council from the artist’s heirs thanks to a public subscription promoted by the art critic Guido Marangoni. A decade had passed since the suicide by the artist and the great canvas had mainly been snubbed by the artistic-cultural establishment of our country while, due to its subject and impact, the work had come to be particularly appreciated in socialist circles, even more so in the 1919-1920 “red” period. The work – which represents a manifestation of day labourers led by a couple of men while a woman with a child seems to try to dissuade the person at the centre of the action – is very large and seems a declaration of intent with respect to the role and awareness of the new social class. “We will not accept being confined to a corner” the flood of people seem to say as they march towards the viewer, grouped into a silent mass consisting of boys and men. The viewers of the work are in this way the unknowing witnesses of an irreversible political action, of something that is destined to leave a mark on history and which by now it is useless to oppose.

The frame is the leitmotif of the show by Penzo+Fiore, a device that is both a material support and a conceptual device that alludes to the possibility of containing, of separating and visibly putting into relief. But a frame is also an ideological instrument for reading reality, for seeing what happens by framing facts with a particular and univocal point of view. Every book that transmits a vision of the world, every discourse or every poem that says something about reality is, deep down, a frame that separates and isolates a remnant, a portion held to be significant, from all the rest. So a frame serves anthropologically or underlines that everything to not the same as everything else, that there are differences and that these are important. For this reason a frame is fixed and rigid, capable of supporting and holding on to the content that we entrust to it, without any effort, negotiation or explicit rethinking: the frame is the scaffolding that supports each thought and that condenses it into a vision, even the most intimate and fragile thought that has need of our care in order to stay alive.

Fragility and incompleteness are common to both the large-scale plaster installation IlQuartoStato and the glass version which is more intimate and consists of only three elements in the most recurrent colours in the oil paintings by Pelizza (green, brown, and yellow). They are three disordered fragments that cannot be closed into a single piece, and that will always have a side that is open, incomplete, undefined. The sensation is that of a marginality, of a failed attempt to fully embrace the content, in a condition of impotence in the face of the devastating complexity that is unveiled beneath our eyes. If in the plaster work the most evident characteristics of the frames are the numerous constituent parts and the perception of their substantial homogeneity, in the glass version there prevails instead the perception of the evidence – perhaps some ancient piece of glass? – and an inevitable sense of defeat. However, there is something that in these three glass pieces that leads to the idea of close observation, to seeing with a lens or seeing through a support, as though the eyes have need of help because they are unable to ensure to the gaze as much as they would like. A work that at first sight is seductive for the beauty of its material reveals itself to be, instead, tragic, overcome in its intimacy and almost desperate.

The contrast between the expectations generated by the formal choices of the work and the deepest reasons for its coming into existence is a recurrent characteristic in the work of Penzo+Fiore as is shown, for example, by Gold one and Oggetto ideologia. In both the frame is once more to be seen, the link and aggregator of this show, but ironical in this version. In fact, the former is a column of pieces of frames supported by a small glass cylinder, and it constitutes a phallus-like vertical element: the work’s title refers to a goldone, a condom, and often the word is used in popular language to jokingly refer to someone who has made a stupid remark. Gold one in this way mocks any ambition to create a self-sufficient element, unless there is available a genuine content able to uphold a confrontation with reality: it is illustrative of a thought unable to sustain itself and that collapses, not being able to uphold its own weight and having need of a support. The second work, instead, consists of a silicone mould of an antique wooden frame: it is soft and malleable, good for all seasons like an ideology that becomes meaningless chatter and without flavour; it does not burn, it doesn’t make its mark, it no longer has the necessary strength for conveying its own authentic vision. Oggetto ideologia is an anti-frame that shows the limits of a story that has all too often been told, of which the plot is known, as are the places and characters. So why listen to it again?

In Senza ma, an installation created from 250 glass nails that outline the words of the title, Panzo+Fiore invite the viewers to take sides and to take up a public position without profit or advantage, without sophistry or flip-flopping: it is an attempt to lead back to intellectual honesty a discussion that can get stranded in banal thought or in misleading and non-transparent reasoning. The warning is to follow rectitude, without giving in to the amorphous disorder that characterises the present day, society in the time of social networking and its thousands of sly distractions. Companions, despite the murderous knocks we have taken, let us remain united and keep the flag flying high.

[1] Definition of “Società di massa” (Mass society), in Dizionario di storia Treccani, available in Italian here, link consulted on 2 September 2019.
[2] Il quarto stato was also the name chosen by Pietro Nenni and Carlo Rosselli (as a tribute to the work by Pelizza da Volpedo) for a magazine of which a few issues were published in 1926, before being closed by censorship. The periodical proposed fighting Fascism and discussing the idea of Socialism.