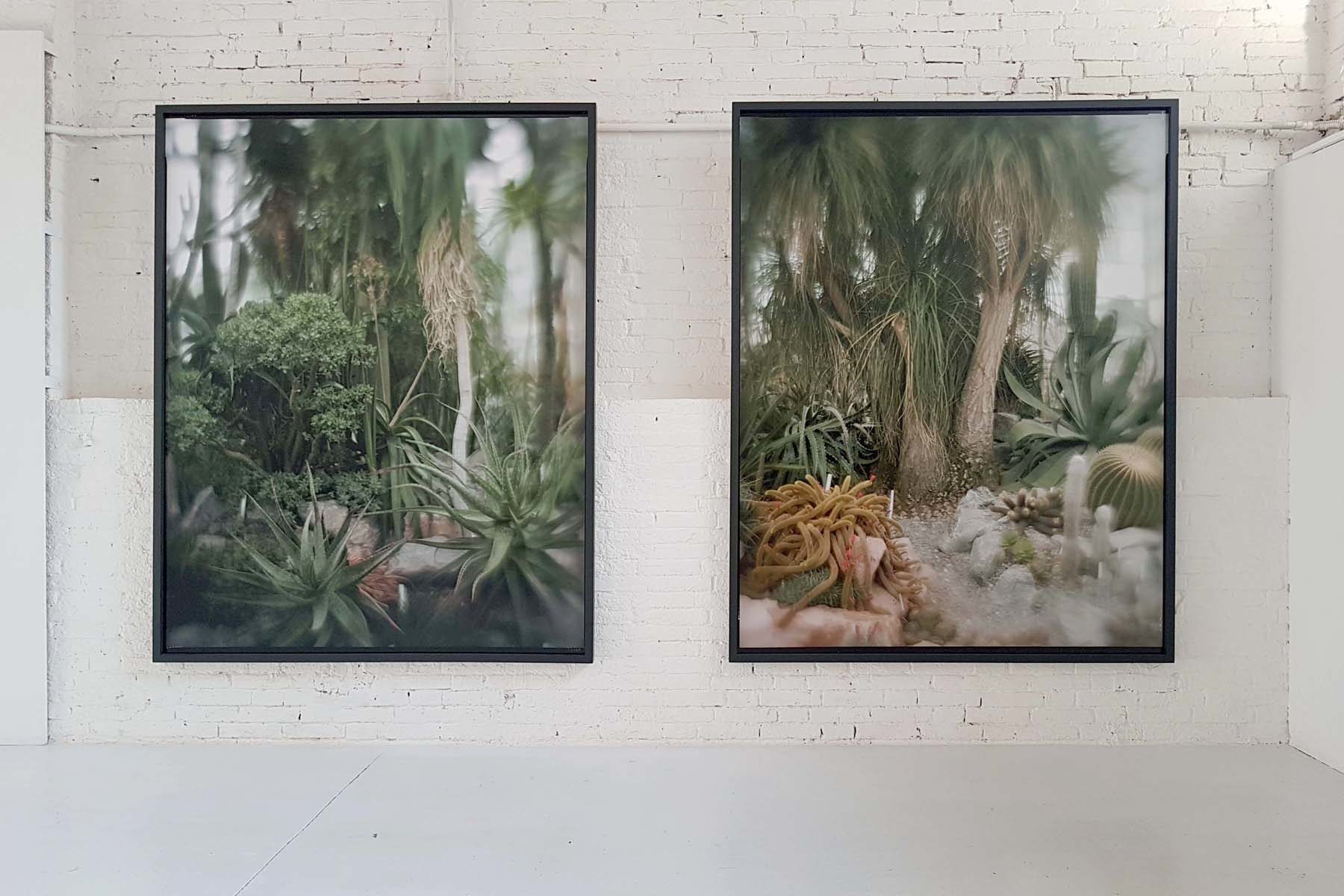 
A Dialogue
The reasons behind Recursions and Mutations are anything but academic and must be searched for, not so much in the art itself as a field of inquiry, but in the relationships between people. Even though it might seem ingenuous or out of place to underline in a context such as that of contemporary art – characterized by natural competition and at times by the invasive presence of the market –, the relationships and esteem between people are in fact values that, as in this case, have a particular relevance. Recursions and Mutations started from Jacob Hashimoto’s idea of setting up an exhibition by directly measuring himself against three other artists. The show, in fact, is the result of a project by the artist shared with Vincenzo Castella, Lynn Davis, and Roberto Pugliese. The works were chosen or specifically made for the occasion, and were based on a common approach and on visual stimuli provided by the works themselves, in a dynamic action of direct involvement. In other words, the show developed as a form of debate, thanks to which the aspects of negotiation and dialogue had priority over the poetic choices of the artists. In this way the works were put into the condition of speaking to each other, because their relationship and presence in space is the result of a process arriving from far off.

A Question of Strategies
Recursions and Mutations analyzes how repetition, its acknowledgement, and the successive act of deviation/mutation with respect to an imagined course, can be a method and a significant analytical system for scrutinizing and analyzing the reality that surrounds us. And in the same way such a modality is also an extraordinary tool for the construction of a work and the articulation of its parts. In particular, the show examines the processes of reiteration and modification in the practice of Castella, Davis, Hashimoto, and Pugliese, the work of whom incorporates recurrent modalities and approaches, aspects principally due to three factors. The first is the choice of subject or theme, whether from an iconographic or conceptual point of view, one that might show the interest and continuous urging of the artist in the face of the field of inquiry. The second aspect is due to the dynamics of the operative procedures of the work, the construction of which necessarily incorporates known modalities in which are applied and reiterated a consolidated procedure and, instead, areas of an evidently more explorative character, due to contingent differences. The third factor depends, instead, on temporal, environmental, and spatial questions, which can present similar conditions and technical variables or, on the contrary, highlight the modifications of a single aspect, even while the other conditions remain unvaried (i.e. ceteris paribus).

The Works
In the photos Castella has made in the botanical gardens and woods of Finland, it is possible to understand a tendency to recursion due to his choice of the same kind of subject in physically different places. The artist is strongly tied to an attentive and recursive methodology in his recording with his shots. However, he is able to upturn the question because, thanks to a rigorous methodology, he constructs images in which it is the viewer who is placed in the condition of searching for and, eventually, understanding the mutation. Here nature plays a central role: whether it is ephemeral and constrained inside a nursery, or wild and uncontaminated as in Scandinavian landscapes, it is within its manifestations that, like an epiphany, it reveals its development.
The black and white images by Davis result from an in-depth study of the icebergs in Greenland, which she began in the 1980s and has continued for many years. Her photos, shot as though the camera’s lens were immortalizing the majesty of ancient temples, are witnesses to the poetic choice of the same subject shot, however, in different periods years apart. Such a modality highlights the changes of the location as a result of climate mutations. The structure of the icebergs has changed, and their imposing volume has diminished, while their melting seems to be irreversible. The question that such works generate in the viewers is obvious: is this really what we want?
The works by Hashimoto are characterized by the repetition of visual elements, such as the texture of the surfaces and the form of the elements, but also of the materials used such as, for example, bamboo and the suspension system using threads. His pictorial work is processual and hybrid, in which the elements dismantle and then recompose the image in a three-dimensional form, thanks to the use of various visual planes placed in parallel. Such an approach breaks down the planarity of the painting and perspective as the modality for representing the depth of space, impelling the observers to undertake an analysis of the work in relation to the dynamism of their body.
In his work, Pugliese frequently uses both recursive materials (as, for example, the glass ampoules of Liquide emergenze future) and those of an immaterial character, thanks to the algorithms that produce the soundtracks of many of his works. In the case of the Venetian installation a specific piece of software recursively employs the level of the tides of the lagoon, captured in real time from the internet, which continuously modifies the musical cell. The raising of the sea level, caused by global warming, is returned to us cyclically, with a work that presents sound as a wholly immaterial source of warning.

Recursions and Mutations
In general, the phenomenon of recursion indicates the use of a criterion, an algorithm – but also an approach – in such a way that the results obtained from it contain and manifest themselves in a recognizable form. In other words, the result is a kind of direct parentage, an atypical form of parthenogenesis, in which the constitutive elements are visually reiterated, even though in a way that transforms them. Mutation, instead, answers to the tendency to change, to significant yet not total variation, one capable, that is, of still making perceptible the preceding form from which it originated. Such a modality is to be found in literature (as, for example, in the rhetorical figure of an anaphor), in music (for example variations on a given theme or the samples of portions of music composed from the end of the 1980s), but also in the visual arts in which mutation has been used both as a phenomenon of micro-changes of visual details, and as the conceptual basis of the work.
The questions of recursions and change have constructed some of the central elements of a revolutionary philosopher such as Gilles Deleuze. When he wrote Difference and Repetition he aimed at overthrowing the monolith of identity and the logic that derives from Kantian idealism, in favor of a thought based on multiplicity. For him mutation, deriving from a search for difference, is itself the propulsive element of thought and not, as was traditionally imagined, the rust that undermines its continuous surface. Similarly, we could state that the concept modality of Recursions and Mutations – in many aspects linked to the idea of the cyclic nature of time, as well as to the theories of historical courses and recourses – is fundamental allowing the work of an artist to answer formally and poetically to development, to the inexhaustible change that we are forced to react to.