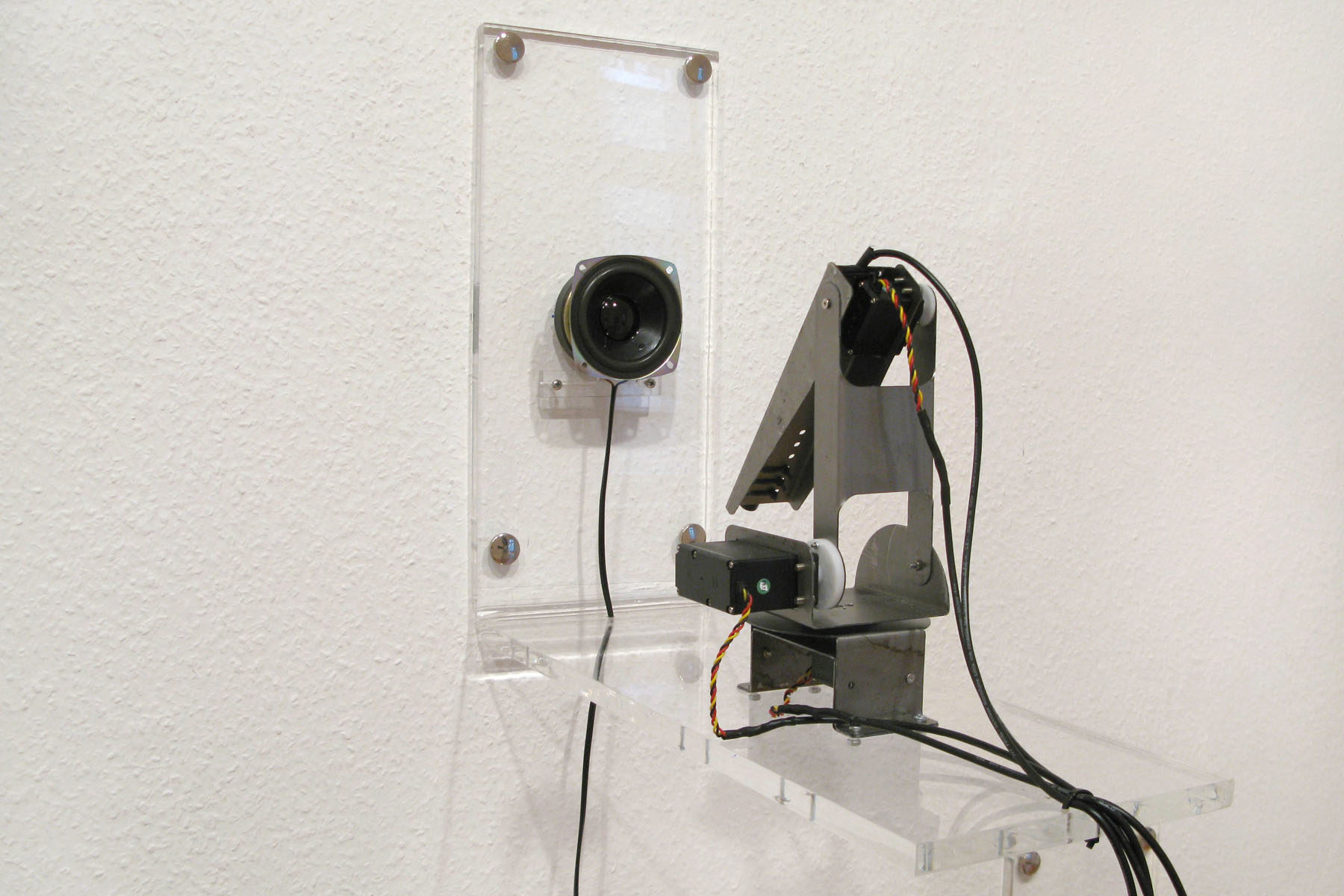 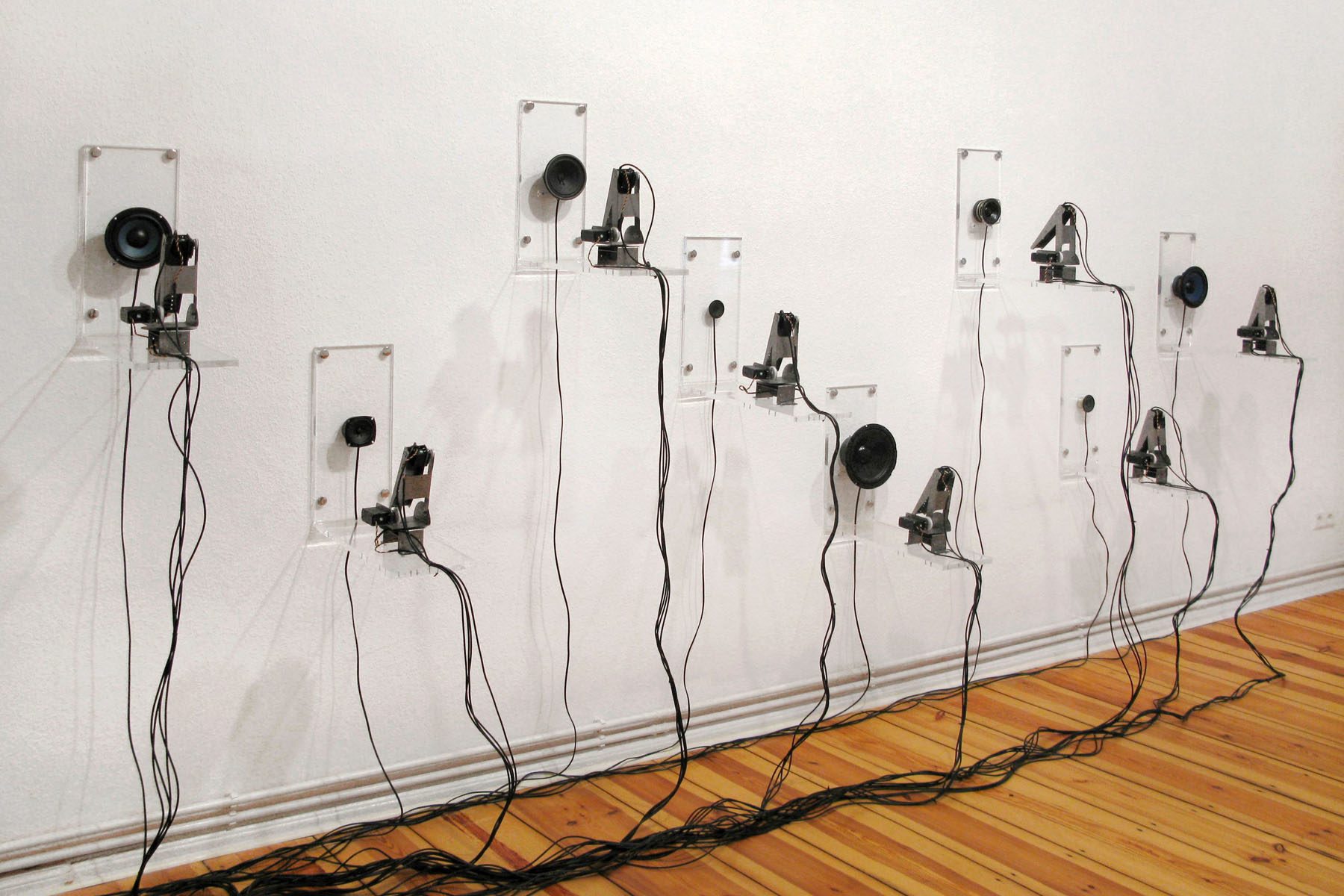 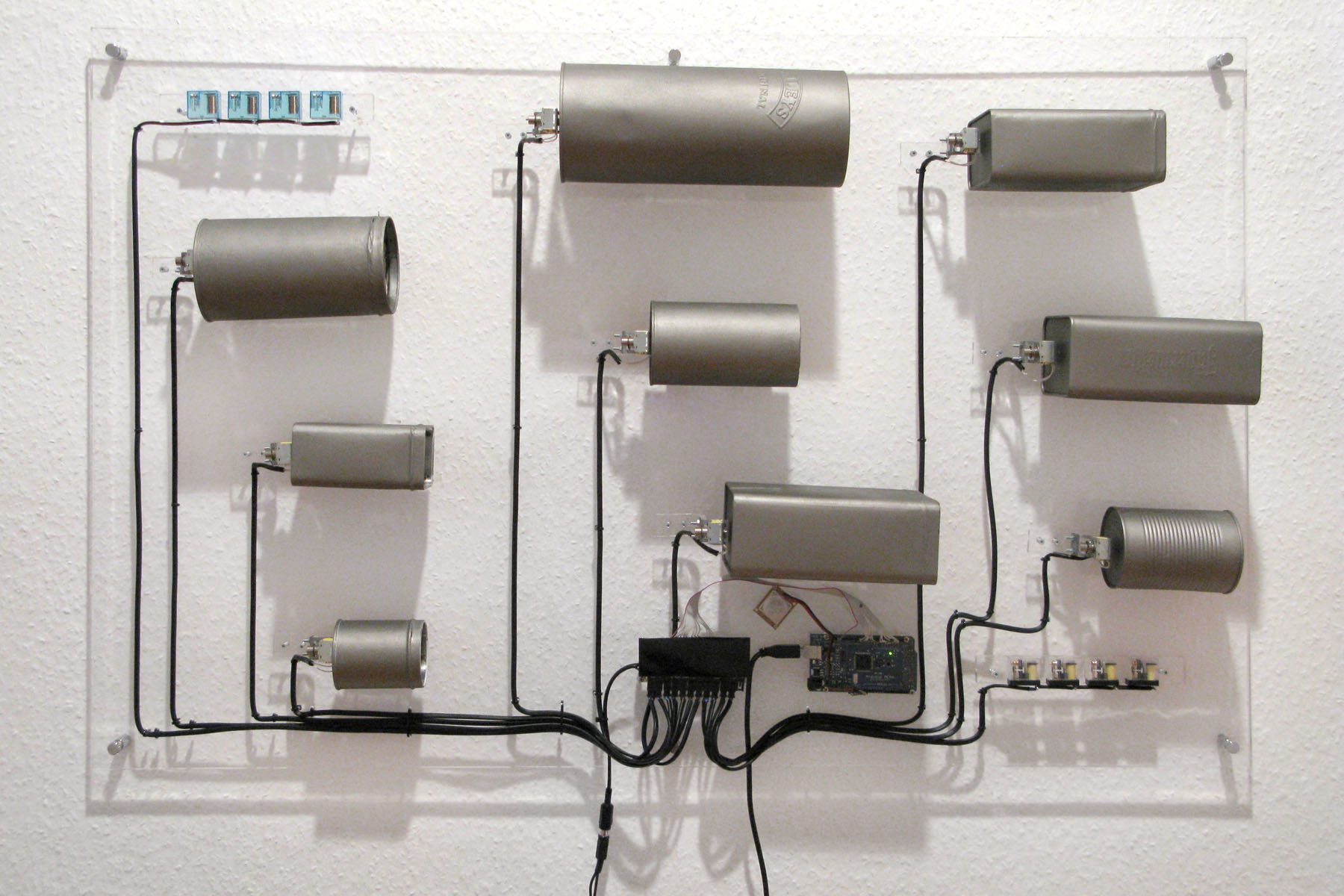 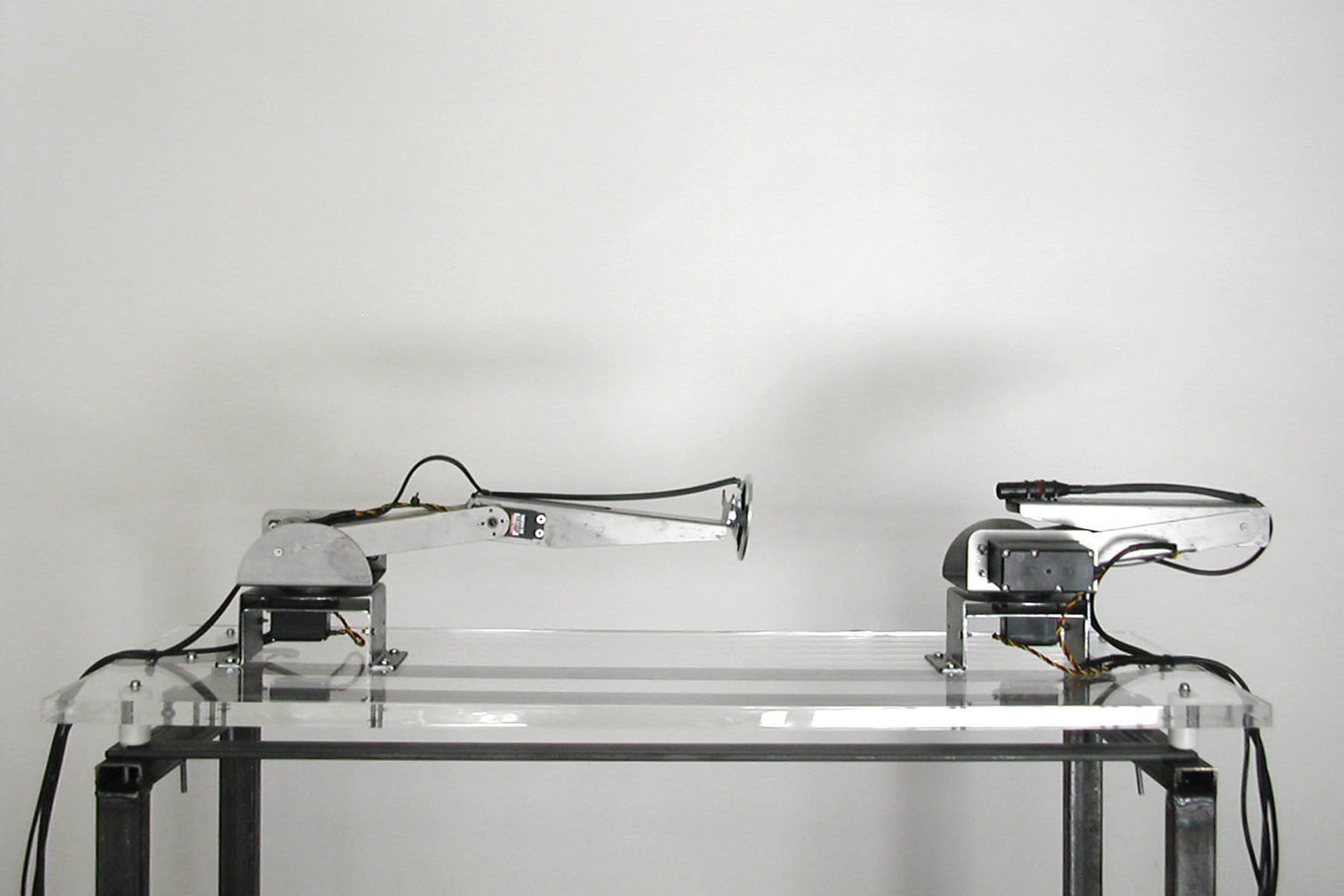 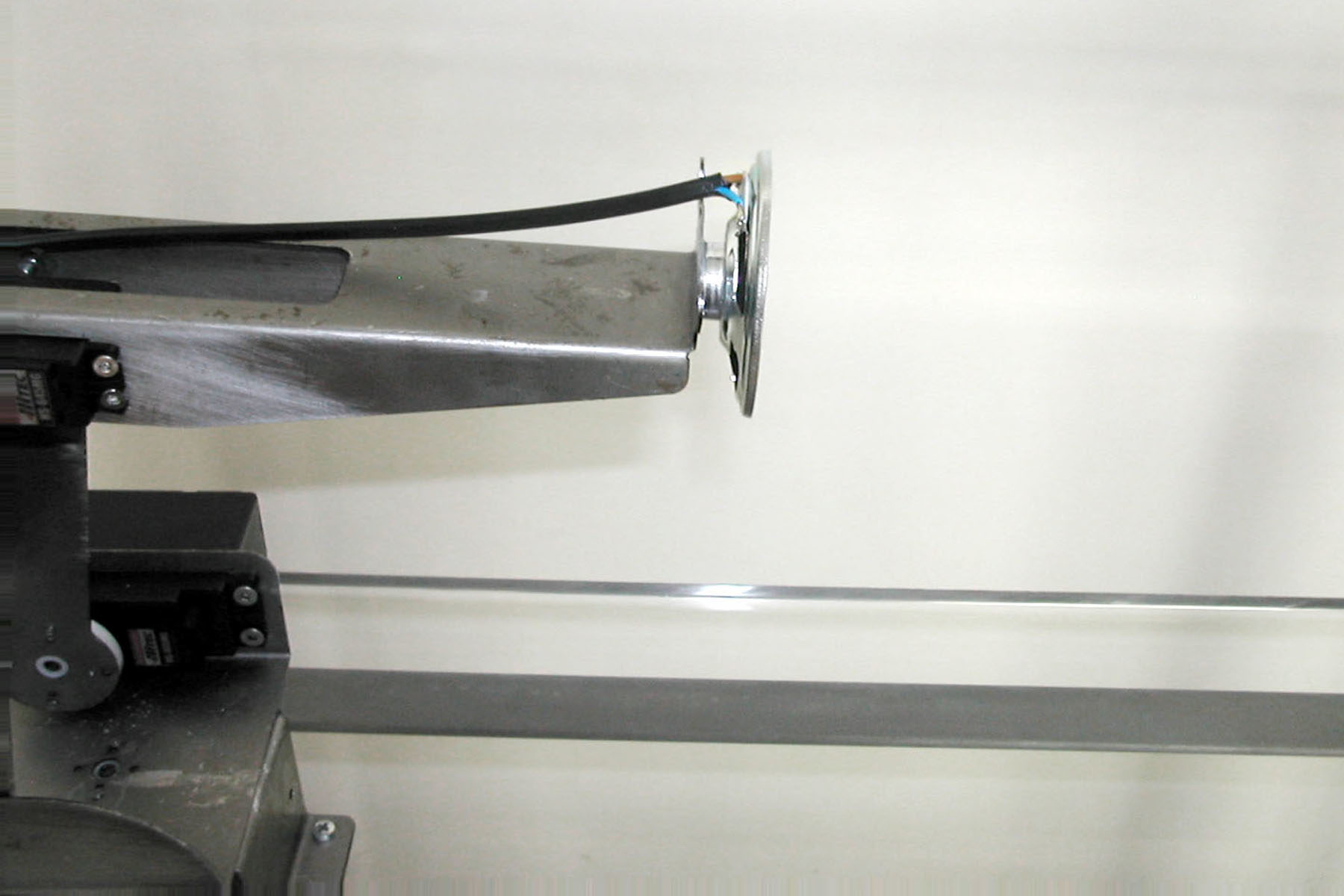 
Reason and faith. Much of the anxious suffering of Blaise Pascal arose from the opposition and contentious struggle between two cognitive instruments, two modalities – geometric rationality and spiritual feeling – which are the principal forms that man can depend on. In particular, the esprit de finesse (knowledge that comes from the heart [1]), in French philosophy, represents the advanced stage of consciousness that goes beyond the experience of the world of esprit de géometrie, and allows man to understand the divine. Reason and faith, or, if we want to express it in broader terms, the rational and emotional approach are, then, contrivances of behavior that permit a total experience, from the finiteness of material things to the heartbreak of the «eternal silence of infinite space».

The mechanical works by Roberto Pugliese lead us to this pleasantly embarrassing interpretive dichotomy, of actual robots that interact among themselves based on the criteria of the nature of sound. The artist, in fact, created mechanical arms, each equipped with microphones and speakers which, in moving, set off the phenomenon of acoustic feedback – or the Larsen effect [2] – that we are all familiar with as an annoying disturbance (the very high-pitched whistle that unfortunately occurs when microphone and speaker are too close to one another). A complex system of software designed by the artist controls the electric motors and the parameters that move the robots, which seem to chase after each other like children playing hide-and-seek. Feelings of surprise and wonder are kindled in the observer in face of the game of the participants and the theater of sound that obstinately loses and searches for itself. And especially, beyond any prior logical-rational expectation, such machines produce in the observer a sense of innate poetry, not only due to the fact that the mechanisms of feedback are perceived as natural [3], but also because the sound can easily bring one back to the experience of a musical nature.

The work of sound art, which, by tradition encompasses an environmental vocation of interaction that can be traced back to the relationship of spectator/environment, ceases in fact to be the context, a simple device that sets in motion the interactions of the space with the spectator: it is itself transformed into the subject of interaction. The observer is not alone, he is not the only subject who sees and hears, but he discovers that besides himself, there are other actors in action who step onto the stage (though bound by an assigned role) and might have the power to steal the scene from him. Equilibrium and Equilibrium Variant are in fact two works that challenge the paradigm of the work as a field where network relationships occur [4] to present itself instead as a self-subsistent entity, performing its own essence, its own nature. Thus, the robot that regulates itself has no need of an accomplice in the spectator; on the contrary, it turns him into a voyeur, conscious of his own role. We can say that the spectator is emancipated – as theorized by Ranciére – not as much for his individual or direct will as for the fact that the artist «hopes to produce a form of awareness, an intense sensation, a push toward action» [5]. The two works by Pugliese, however, do not obligate whoever looks at them to interact (though they encourage one to do so), but leave the observer in a state of freedom, for the fact that he can accept or refuse the game that is proposed. They are, in the ultimate analysis, machines that are not completely useless. [6]

The fact of being half-way between a dimension that is useful and one that is useless, testifies to the will of the artist to destroy the paradigm of the closed work, of the machine that always ends up celibate and lacking something. The piece Lussuosa macabra vanita (characterized by a small hammer hitting a metal plate) places the work in relationship with what is happening in the world, beyond the direct control of who is looking. In fact, the number of percussive sounds that one hears – the variable element – is determined by the estimate of the number of animals that are killed for their pelts every day, the number of which is constantly monitored thanks to a website set up for the purpose which the machine is connected to in order to download the data. As such, the work is both a cold executor of predetermined orders and a machine that reacts to the variability of the environment and external events: here again, a dimension of intermediacy, due, in this case, to the capacity of the work to be the node of a network relationship. In this case, the spectator, if he wants to interact (and not necessarily in favor of the animals, although the artist hopes for it), is forced to carry out long-term actions that bypass the will or the emotion of the moment, calling his own ethical behavior into question. The work, in the last instance, can function as a machine that activates processes, while the spectator can decide whether to be a simple listener or to play an active role, in the first person.

Igor Stravinsky, in fierce opposition to the romantic sensibility of the 18th Century which had somehow deified the interpreter (and which was never called into question for the whole of the 19th Century), was often very critical with regard to musicians who performed his music: too much exhibitionism, too much interpretive freedom, almost to the point of falsifying the text, while in the end, it was enough to simply do what was written.  On the other hand, as he explained in his lapidary way, «composers only put notes together and nothing more» [7] given that «music is, by its very nature, essentially powerless to express anything at all, whether a feeling, an attitude of mind, a psychological mood, a phenomenon of nature, etc.». [8] Stravinsky, in other words, would gladly have entrusted the execution of his music to a robot or a machine capable of realizing his instructions, in complete coherence with the intention of the author. And this is what Roberto Pugliese has done with Orchestra Cinetica, an acoustic ensemble created by putting together various electromagnets, each of which executes a very precise rhythmic phrase consistent with the physical-mechanical properties of the materials (which are visually as well as acoustically far-removed from instruments played in an orchestra), but with the logic of a score which inserts the musical events into a macrostructure. In place of the performer, of the interpreter, Pugliese, in reality, substitutes circuits, wires, magnets, a kind of still life that reacts according to the method he himself has chosen, without expressing direct will, without even a breath. The observer looks and sees at the same time. Poor old Igor, though, would have died of envy.

[1] See Blaise Pascal, Pensée, 1958, E. P. Dutton & Co, n. 267: «Reason’s last step is the recognition that there are an infinite number of things which are beyond it.» or the celebrated n. 282: «We know truth not only by reason, but also by the heart.»
[2] «The “Larsen effect” (named after the Danish scientist Søren Absalon Larsen who first discovered its principles), also known as acoustic feedback, is the typical shrill whistle that develops when sounds emitted by a loudspeaker return to be captured, with sufficient potency to trigger them, by a microphone (or by the pick-up of any electric musical instrument, such as a guitar or bass) and from here, sent again to the same loudspeaker in a closed circuit. The effect is usually triggered when the microphone is too close to the loudspeaker and picks up a frequency emitted by the latter, which in that moment is stronger than the other and which then becomes amplified and reproduced in turn with increasing amplitude, virtually unlimited, if the amplifier were not to reach the saturation point.», Wikipedia.com
[3] The mechanisms of feedback are frequently used in nature to control more varied parameters, from heartbeats of animals to the control of the number of animals across the food chain.
[4] See B. Diken, N. Albertsen, Artworks networks – field, system or mediators? in Theory, Culture & Society, n. 21, 2004, pp. 35-38.
[5] See J. Rancière, The Emancipated Spectator, Verso, London, 2009, p. 14.
[6] I am referring here to the so-called macchine inutili by Bruno Munari, a series of ceiling sculptures characterized by the movement of the elements.
[7] I. Stravinskij, R. Craft, Dialogues, Faber, London, 1982, p. 52.
[8] I. Stravinskij, An Autobiography, Simon & Schuster, New York, 1936, pp. 53-54.