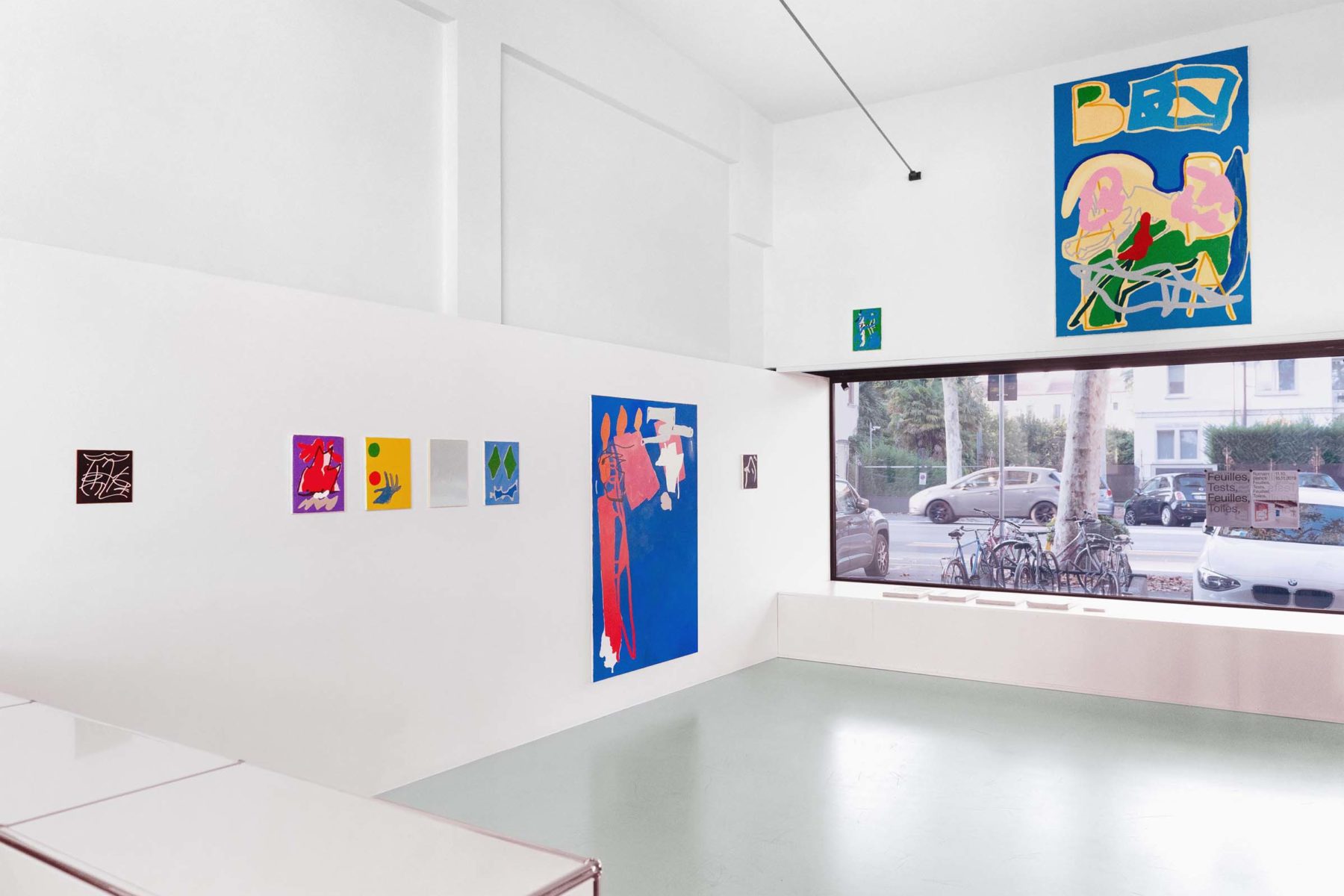 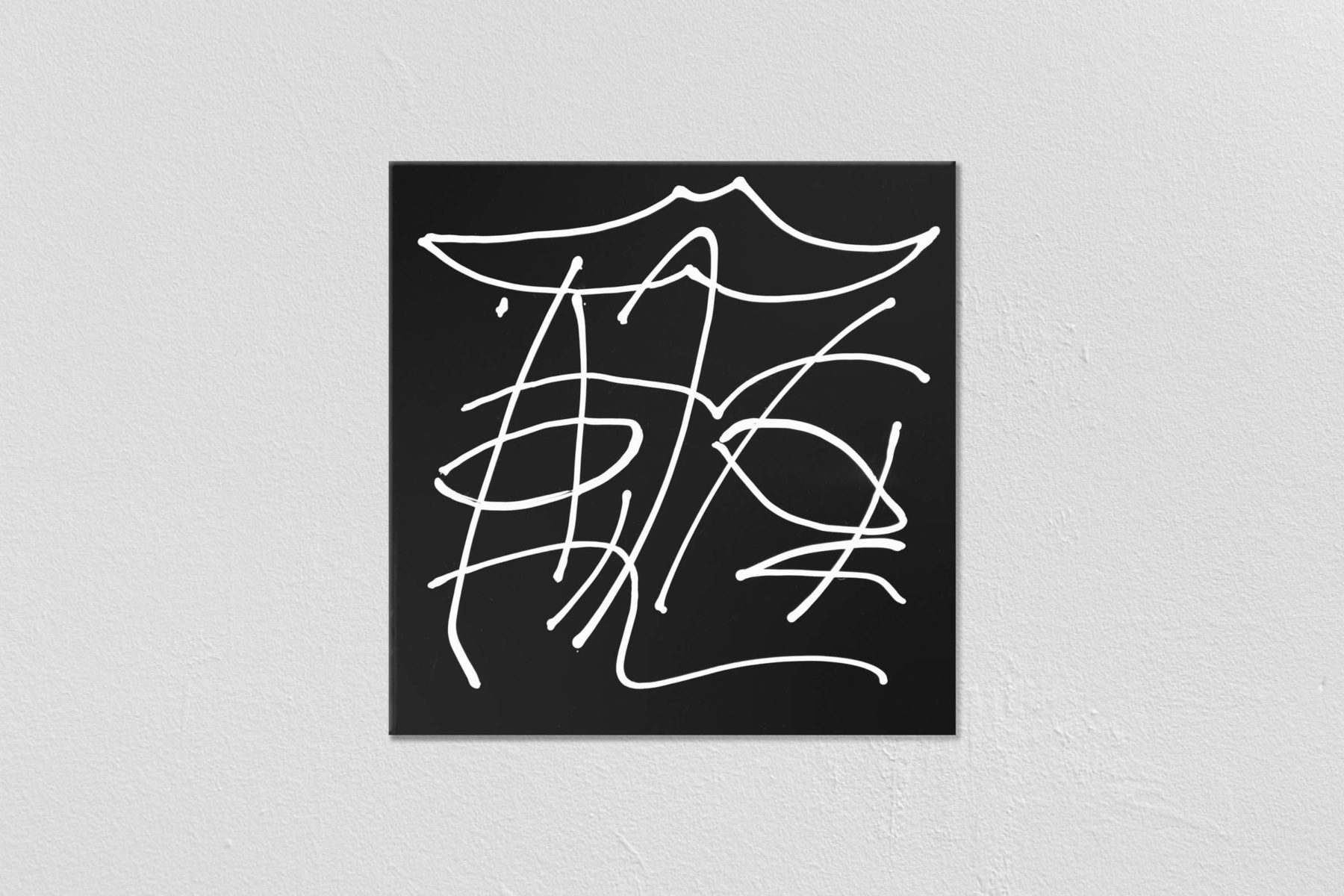 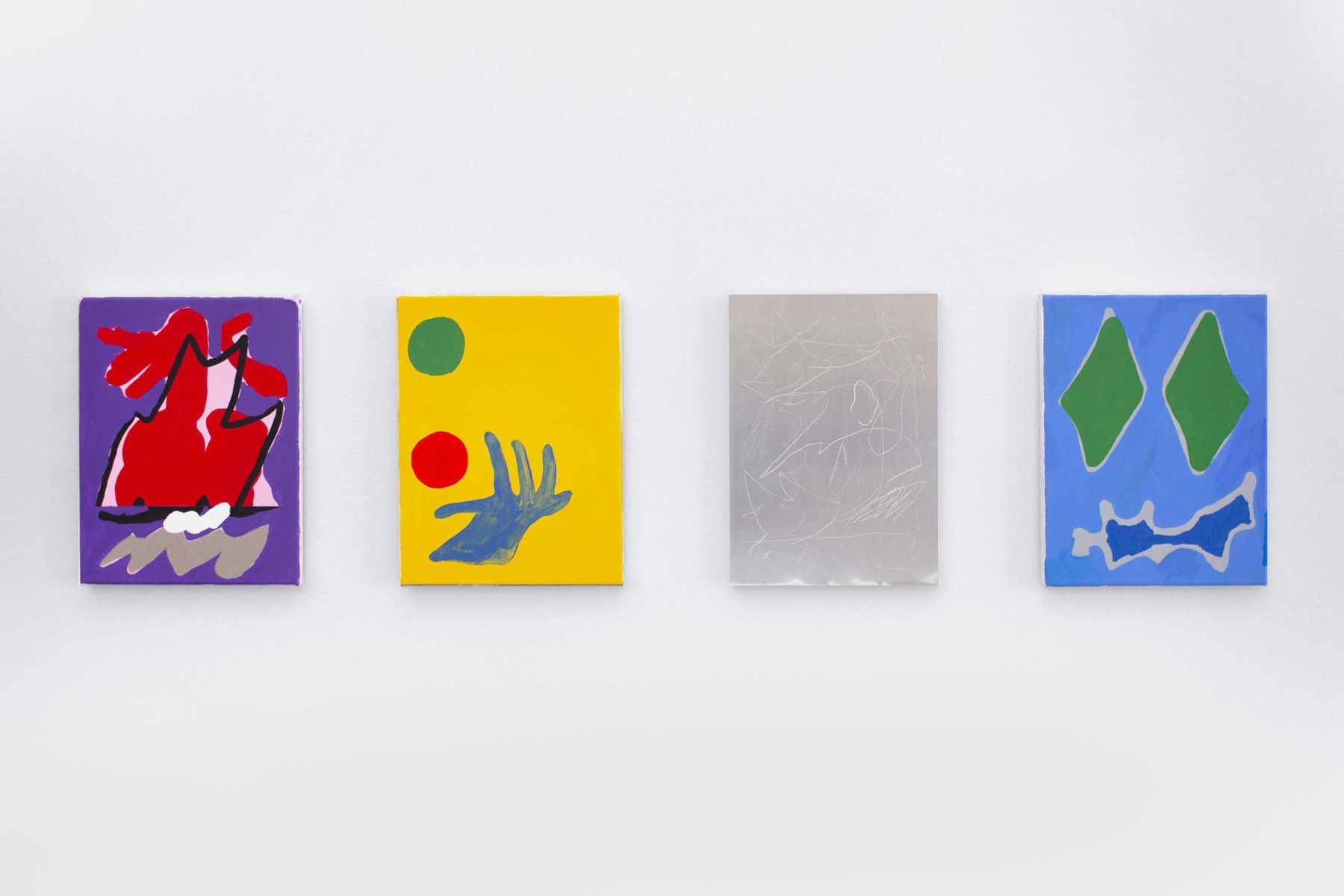 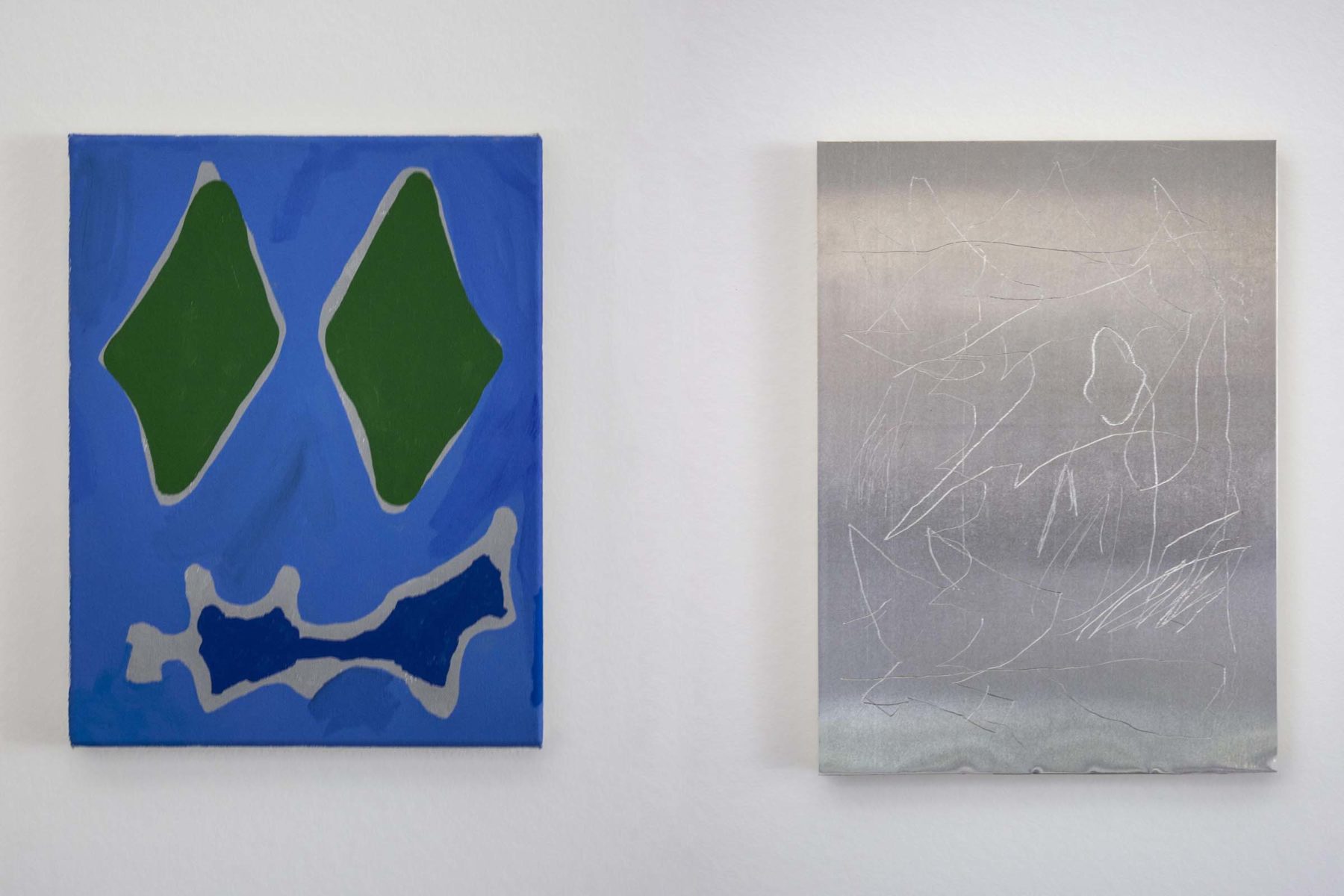 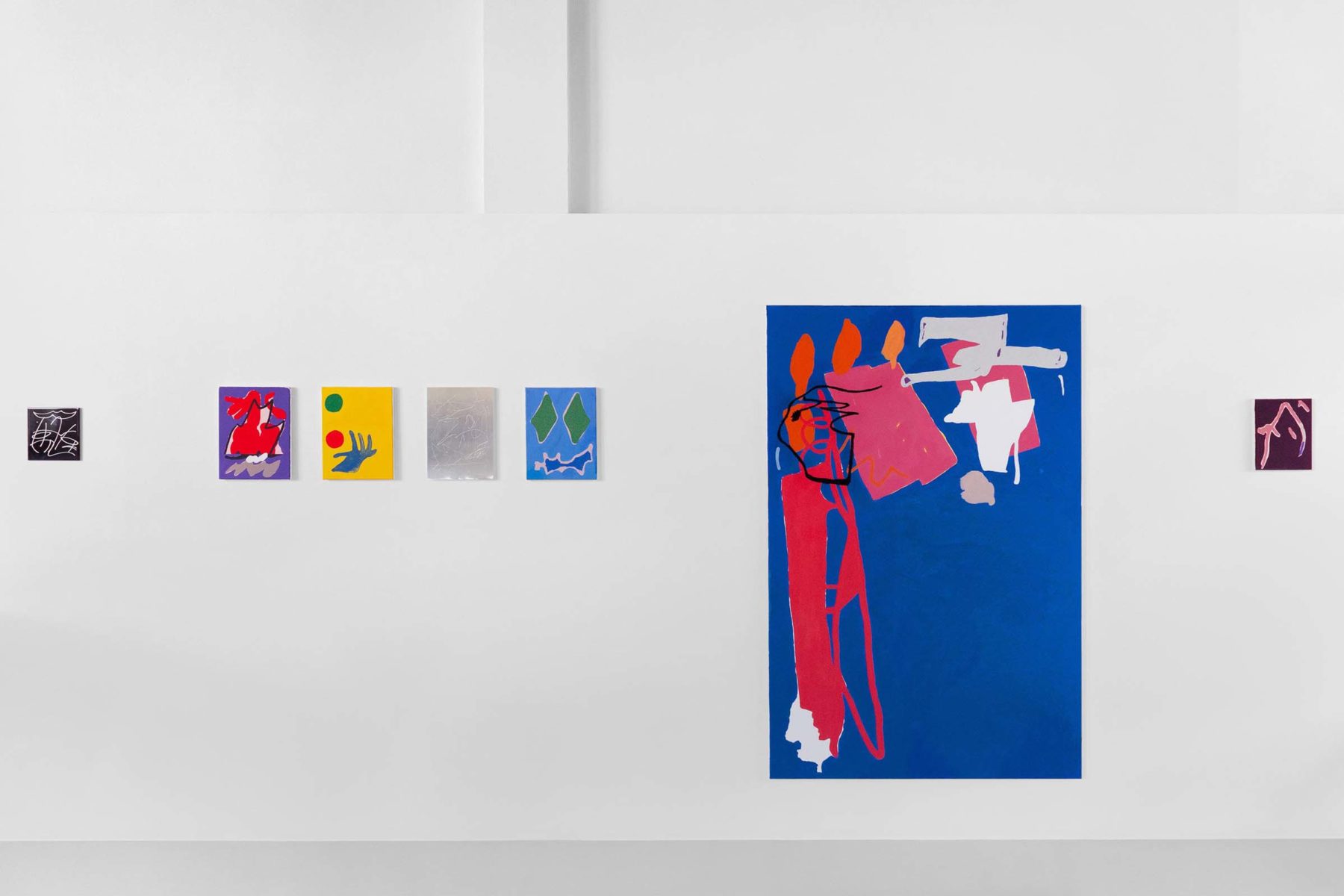 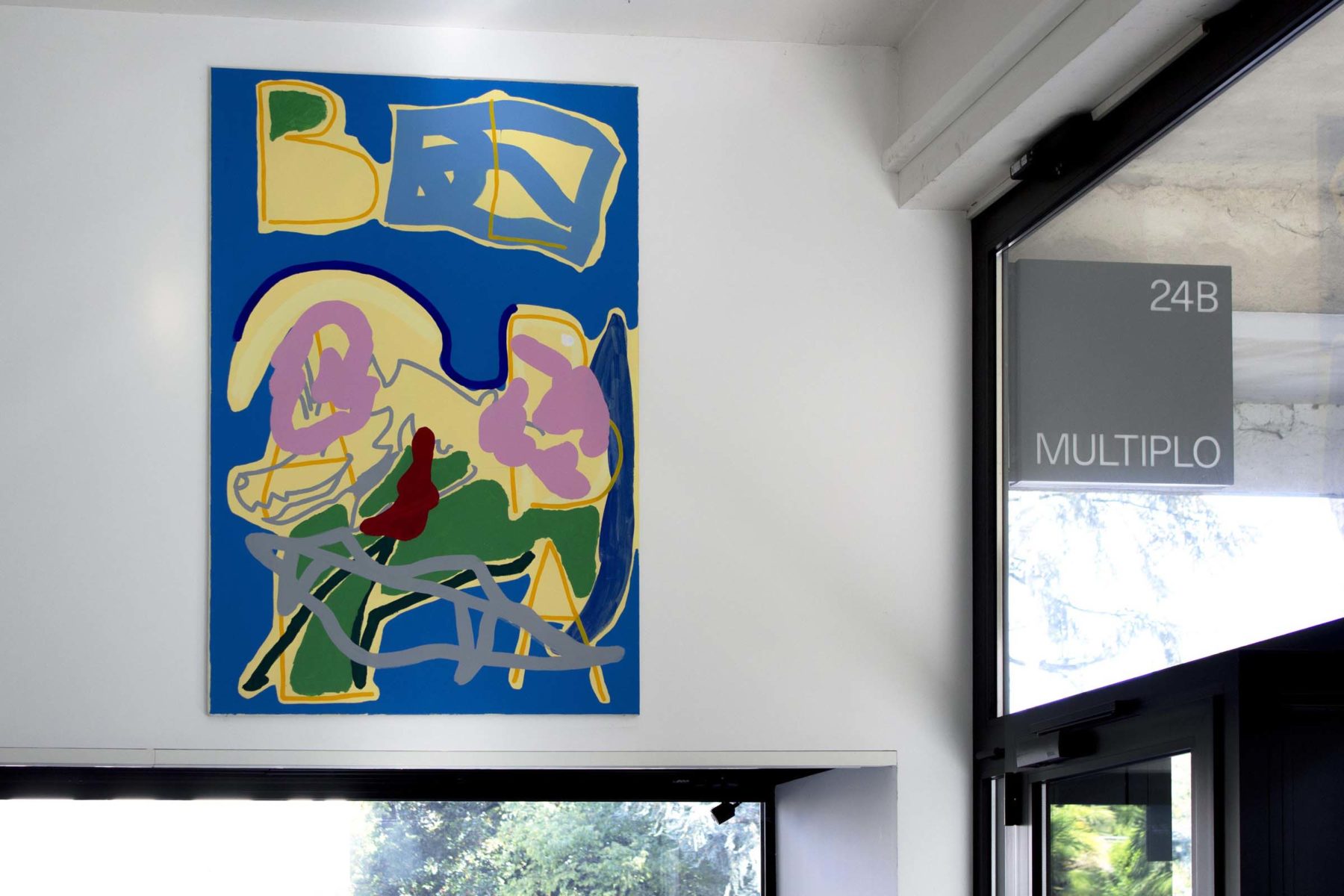 
Romain Blanck’s paintings are created through the use of primary forms combined on several layers over a monochrome surface, in a sort of free-word poetry belonging to a primary visual vocabulary. The artist has built up an immense database of these over the years: he collects sheets of paper, or notebook pages, where people have tried out pens, felt tips and markers in stationery shops and art supply stores. Each line, each drawing or even the smallest visual unit is used by the artist as an independent element of meaning, a lexicon through which he articulates a discourse characterized by minimal grammar and syntactical anarchy. The canvas is thus the place for a scribble, a squiggle, a zigzagging snake to test the thickness of a pen, a doodle to test its colour, or a swirl to engage a bored pen in writing, a pen whose ink is dry until someone picks it up.

Blanck’s painting is procedural and substantially aniconic, based on the continuous layering of elements. These components visually recall street art or graffiti made with spray cans. The artist interacts with the elements that inspire him by organizing their flow with a systematic and scientific approach, like electronic musicians constructing a song, or compiling a concert playlist, mixing the samples they have collected and ordered. In other words, the artist traces a path, which is different each time, using the items made by unsuspecting content producers. They are not authors, but become so because of the ways in which the work is created. The work is also the result of continuous overlapping, a process of constant remaking by the artist, layering the elements until the visual energy that emerges from their combination is more powerful than the algebraic sum of the single parts. This is in fact a traditional part of the creative process in painting where the artist constantly considers whether adding more details would increase or decrease the power of the work in progress. What emerges from this is a sort of sedimentation of visual writing, in a collective and totally unconscious form: it is an exquisite corpse where the artist is the hidden director, playing the same role as chance in combining the words in the game invented by the Surrealists.

Blanck’s artistic practice to some degree recalls the way a geographer might work, but with an anthropological approach. There is an initial reconnaissance (in stationery shops, in the streets) and then a subsequent rethinking and relocation onto a surface in an ordered way (with a criterion that puts together the information conveyed by each element). This is comparable to a geographer carrying out a survey of the territory and then putting together a map highlighting the significant elements of a given area. However, the artist is not involved in creating maps that correspond to anything, he is not interested in the correct scale, the exactness of the representation or the perfect correspondence to the Cartesian coordinates. The places and the significant elements that he selects for each canvas create maps that are out of scale, imaginary and schizophrenic. Differently from maps, the observer does not need to understand where they are or how to move through the area. Instead they are free to not understand, get the wrong idea or make mistakes. And getting lost can become a pleasure.