Slaven Tolj
Craquelure. Pavo and me 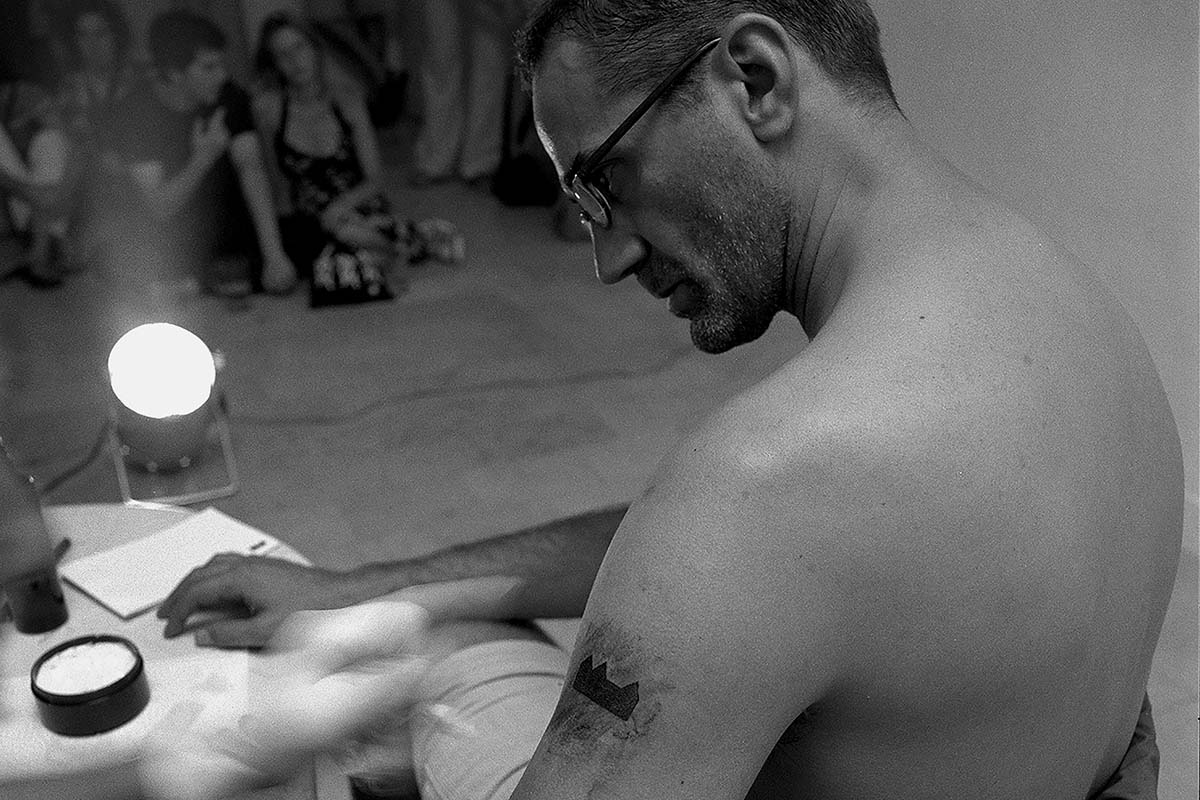 Can’t you see a crack, there on the skin?
Daniele Capra


Slaven Tolj’s solo exhibition Craquelure. Pavo and me consists of some fifteen sculptural and documentary artworks and the performance Bologna, February 2023, conceived specifically for the Municipal Collection at Palazzo d’Accursio. The project is a condensed retrospective in which the exhibited works highlight Toly’s ability to position himself as an interstitial element between inner, interpersonal and political dynamics, thus developing an intimate narrative unfolded on a double track of personal life and expressive research. The exhibition is dedicated to photographer Pavo Urban, a friend of the artist who died in the war in Dubrovnik on 6 December 1991. Urban’s photographs from the Rosarium series are also on display, documenting a performance Tolj made in the Croatian city.

Body art and conceptual art have always been at the core of Slaven Tolj’s work, from his beginning in the late 1980s to the most recent works, which bear witness to some vicissitudes following a stroke that undermined his linguistic abilities. His research, for that matter, is fueled by a persistent interaction with human and professional events experienced firsthand. Tolj’s visual experience builds on the experience of pain and all torments that tear existence apart, leaving it marked with deep scratches. As an artist, Tolj is an attentive being to the highest degree. He is not only capable of perceiving and recording, like a seismograph, the imperceptible variations of the human being, understood as a sort of complex telluric ecosystem, but he is also able to process this data, without taking any pathetic or fictional drift.

Tolj’s work is radical, speaking openly about life, grief, memory, loss, abandonment, incommunicability and defeat. These feelings and experiences are delivered to the viewer as if they were questions – with geometric and sharp precision. Indeed, both his objets trouvés and his performances are soundings and results from real life in all its unexpected essentiality. Yet, what the artist operates on is scale, as Tolj has the ability to not merely transcribe an event or story, but to convey its overwhelming and piercing intensity in the form of an object or action.

In Tolj’s vision, the artwork is a device that enables transmission of experience: a narrative device that amplifies and unearths an element of importance, which would otherwise go unnoticed. Indeed, the work highlights, stresses and emphasizes what would drown in the banality of everyday and indistinct matter: it generates questions with respect to the present moment, the past, relationships, or memory. Moreover, the artwork is an element of mediation and relationship between the artist, his body and the context in which it was generated: a lens that makes visible and legible a discontinuity in the ordinary fabric, a crack or an unhealed wound.

Through his own presence, by means of minimal actions performed with his own body, and by displacing small objects, Tolj thus highlights the cracks and breaks that life and history inflict on the fabric of our existence – like the craquelure that appears on the surface of oil paintings as time passes. And he does not restore or reassemble those margins that are the result of opposing tensions. He rather emphasizes the contrast and progressive rip.

Therefore, for the artist the artwork is a way of inhabiting the world in an interrogative form: a repeated yet uncertain habitus. It is a space of frontier and dissent, with which he interrogates the viewer and invests him with an intense emotional charge – all this without rhetoric, but rather with a scarce yet much needed language. Thus the author reveals the immense and blinding rawness of reality, and of those events that one would probably prefer not to encounter.

Tolj’s life and research have been marked by the historical events that led to the tragic breakup of Yugoslavia: from fratricidal war to the deaths of loved ones, and the deep political and social change that followed. In his artistic practice, as well as in his work as a curator and director of cultural institutions, the artist has acutely recorded the pervasive way in which consumerism and anthropological change penetrated society in the aftermath of the war. He also managed to render the drastic transformation of his city, Dubrovnik, due to the impact of mass tourism.

Similarly, even strictly personal issues such as the transformation of his body acted as a fundamental lens for the artist to observe reality. His personal history, his body damaged by a stroke, the rehabilitation exercises to regain use of language, but also the difficulty in conveying his thoughts verbally: all this became the humus that generated new works. Yet, there is no exhibitionism whatsoever, as for him the body is an unrivaled instrument of investigation and detection, capable of probing, and then providing a poetic image of all the thunderstorms, the glimpses of light and the winds that stir the clouds of our lives. Tolj is straightforward and direct, showing his own intimate truth without compromise, even when he reveals deep and human fragility.

In Community Spirit in Action (1998) Tolj performs in a Zagreb peep show together with a stripper, presenting his own body lying completely defenceless, covered by a cloth. The work sheds light on a somewhat paradoxical situation: the presence of a body-artist’s body goes almost unnoticed, while a woman’s body – although exploited and sexually objectified – is the subject sought and desired by the viewers’ gaze.

The photograph Untitled (1997) bears witness to a historical event that occurred during the war in former Yugoslavia: the majestic chandeliers of St. Ignatius Church in Dubrovnik were removed to prevent them from falling on people due to bombing. The objects were thus replaced with simple industrial bulbs with no identity.

In A tattoo of the logo of Rijeka’s Museum of Modern and Contemporary Art Rijeka (2013), the artist gets the museum’s logo tattooed on his shoulders – an action performed right after being appointed director of the MMSU museum. This is both an intimate and political work: the artist demonstrates his personal dedication to his new institutional role, yet, being an artist himself, this performative action also highlights how museums can turn into a brand and a yardstick of value of one’s work.

In the performance Dubrovnik-Valencia-Dubrovnik (2003), Tolj remains shirtless after removing a dozen garments, each of which has a black button symbolizing a friend lost in the war. He then tears off one of the buttons and decides to sew it onto his own skin with needle and thread – as if it were a medal to be pinned to his chest. However, this gesture becomes a sign of mourning instead, a pain that leaves one naked, and from which one can no longer free oneself.

The black sign indicating mourning is also the central element of the work Untitled (1991), consisting of a mirror placed on the floor, the upper corner of which is covered by a strip of dark fabric. The mirror, almost perpendicular to the floor, reflects the lower part of the viewer’s body, whose feet make the context more apparent, and allow for a more accurate reading of the space. The work addresses an absence, a loss that from time to time becomes apparent, in an unexpected, subliminal and painful way.

Untitled (1999) consists of two Croatian flags, one of them faded, knotted by the artist. The work is a political statement with respect to the cult of personal identity, now completely lost, and nationalism, greatly increased in the Balkans after the breakup of Yugoslavia, and since the beginning of the new century also throughout Europe. By means of this work, the artist highlights the impossibility of finding an appropriate position with respect to the logics of geopolitics, but also his personal discomfort of not feeling fully represented by either flag. Installed in the Sala Urbana of the palace, where emblems and coats of arms abound, the work can be read as a sarcastic reference to the insane pulverization of identity.

In the performance Bologna, February 2023, Tolj remains undressed in the space of the Sala Urbana, waiting for something to happen, for a relationship to manifest. In his ears the song “Bella ciao” plays, one of the first things he recognized when he started recovering after the stroke. Then, that music becomes explicit, present, indicating the presence of an interlocutor, of a possible new dialogue, or a rebirth. Even in its unbearable weight, life is a tragic challenge that deserves to be accepted.

In Rosarium (1988) the artist stands naked in front of the altar of a church, in a state of anticipation and purity, an aspect that can be read both as a veiled reference to the nudity of the Christ child, typical of Christian iconography, but also as a declaration of willingness by Tolj – who was then very young – to face the challenges that life poses, as a man and as an artist. The performance inevitably alludes to the human condition and to the already written destiny that cannot be avoided. This aspect has acquired painful intensity since the documentation of the performance was created by the photographer Pavo Urban, a friend of the artist, who died during the siege of Dubrovnik in 1991.