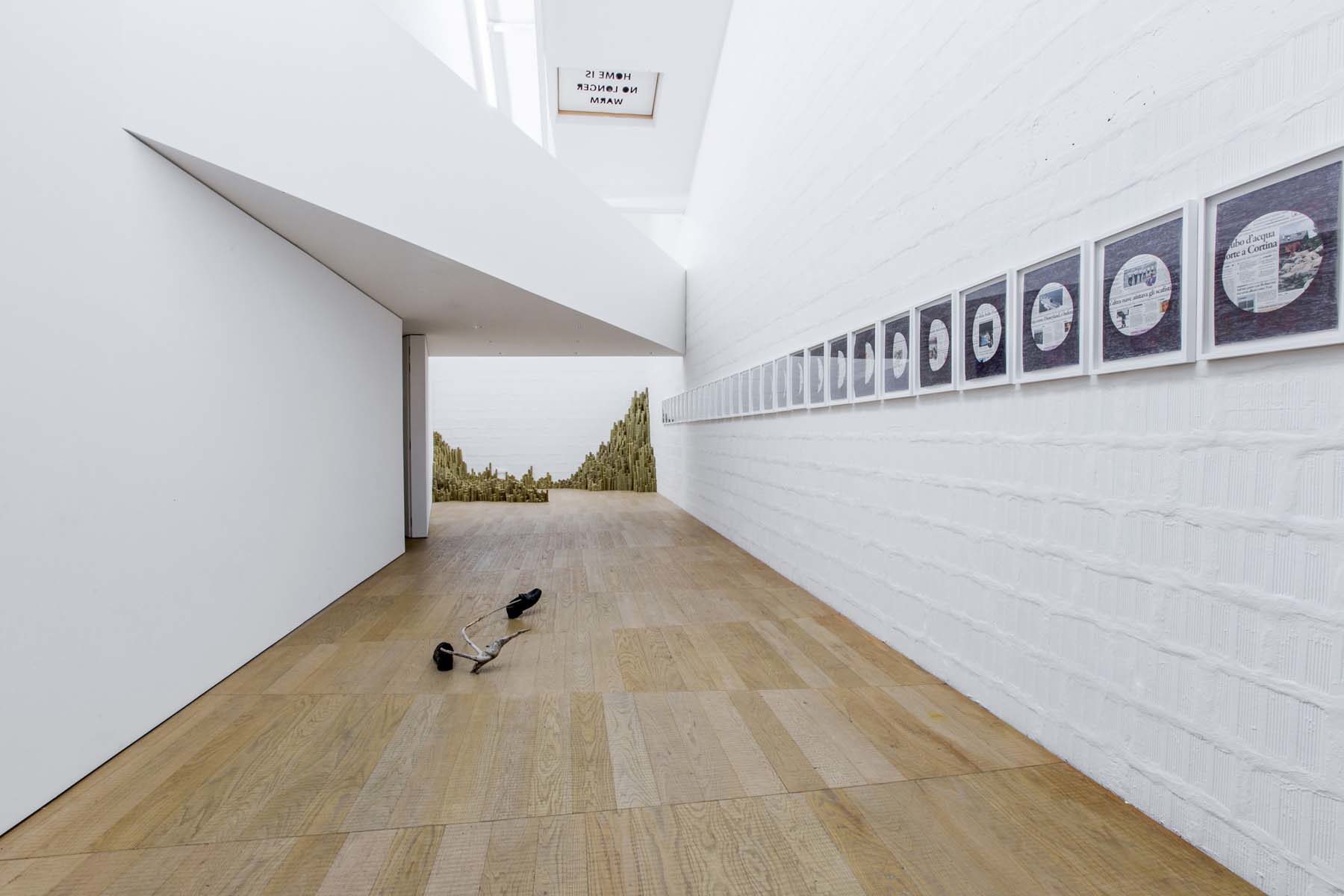 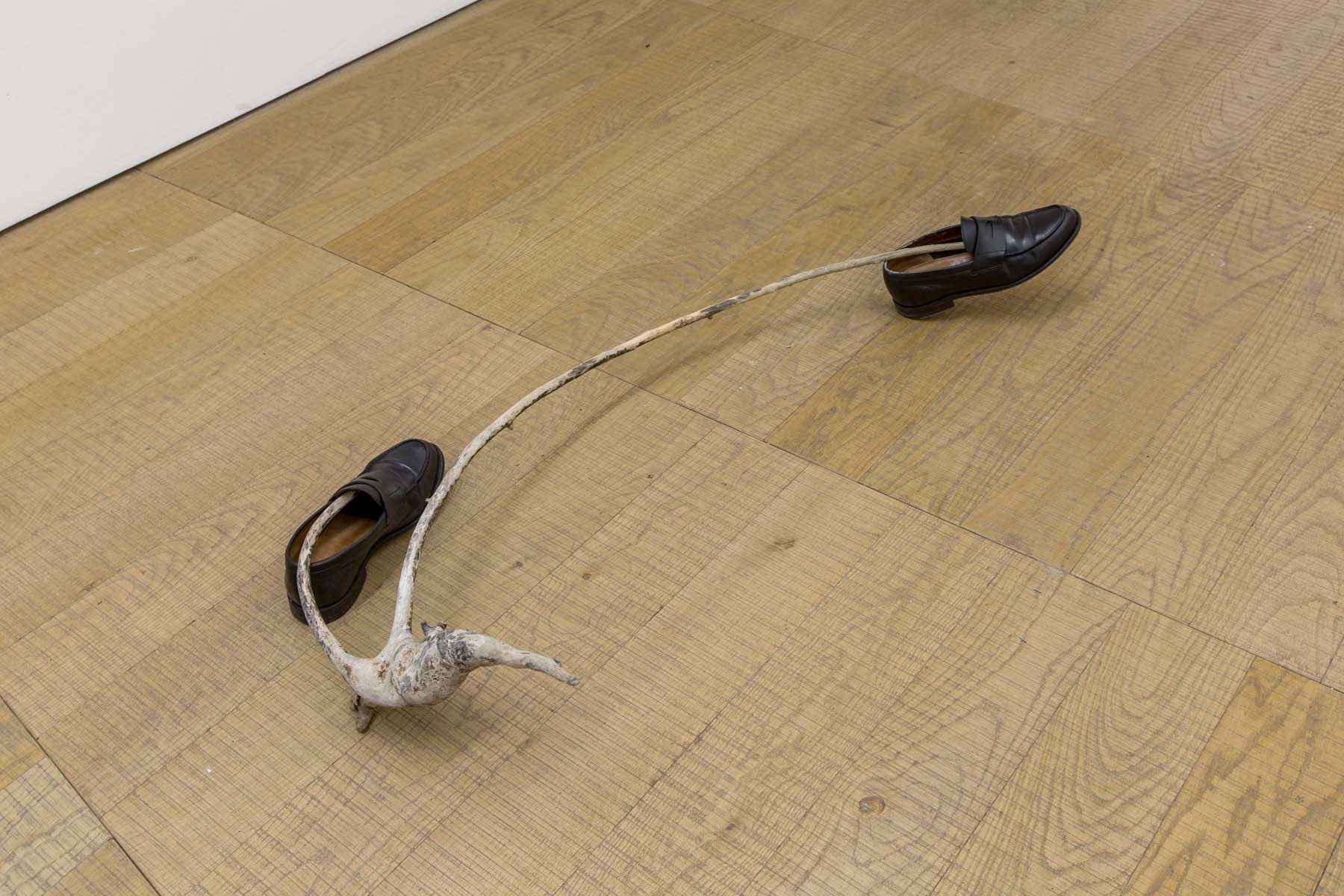 Marco Godinho, A slight change in direction, 2017, found tree root and found pair of shoes, dimensions of a long step of the artist 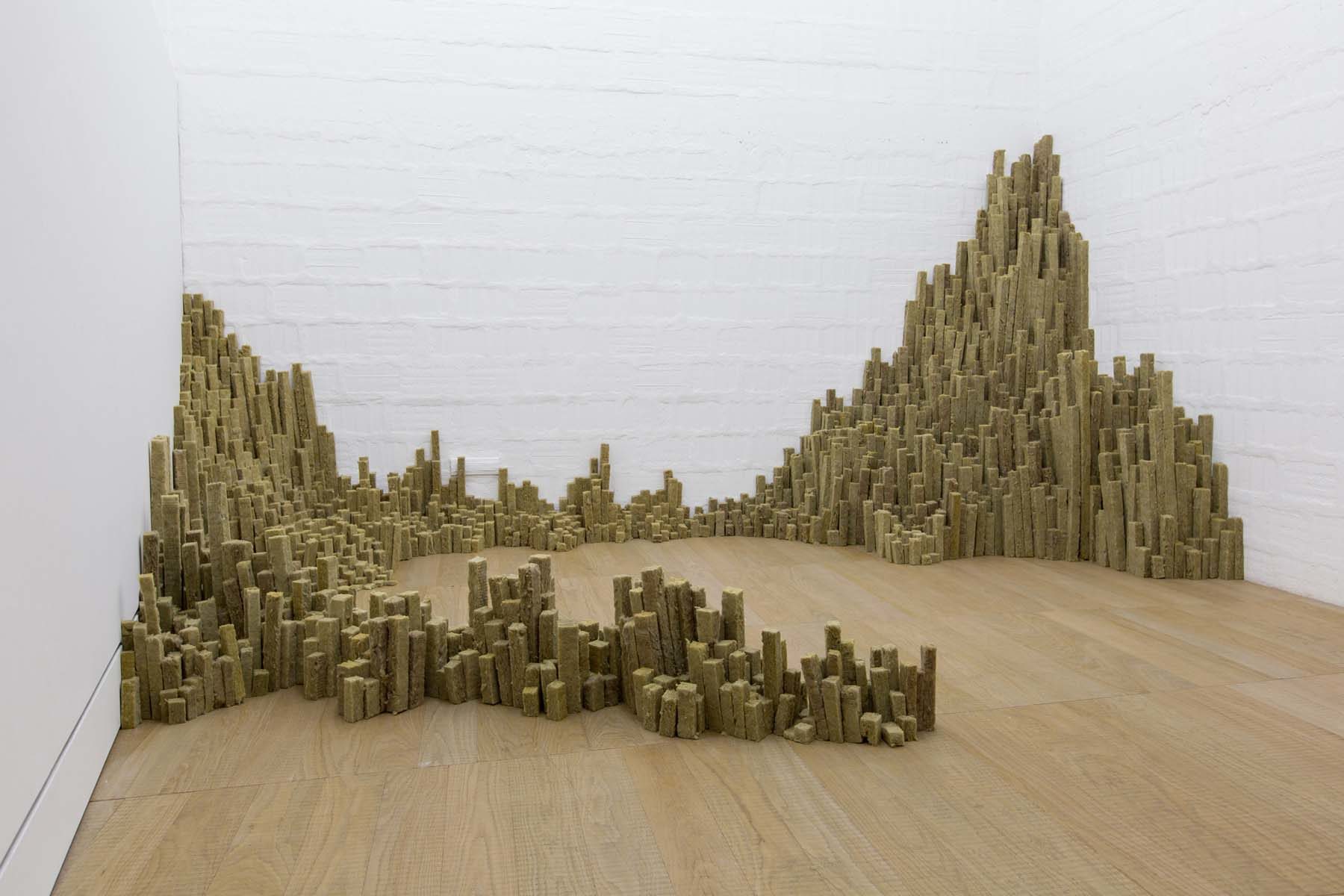 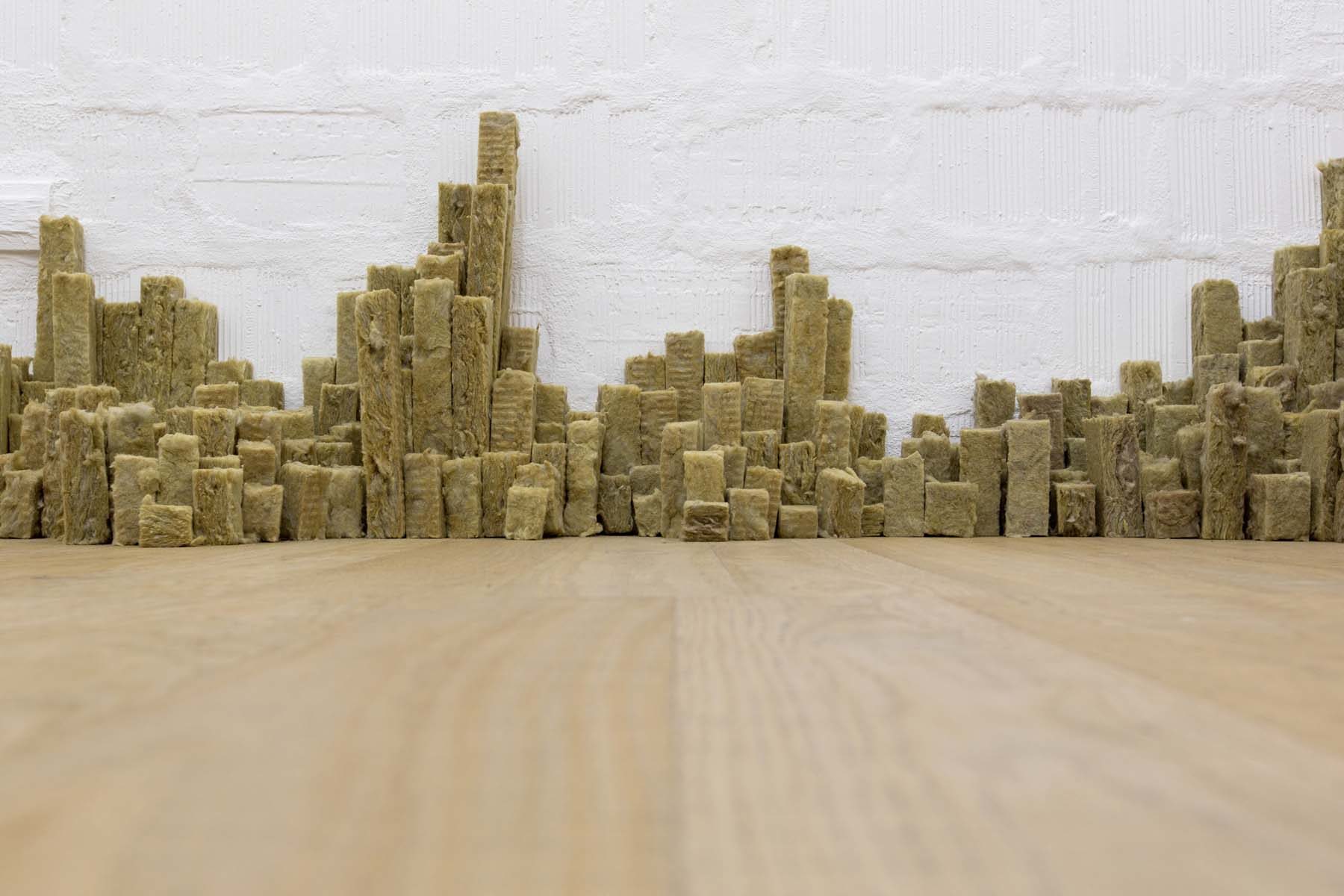 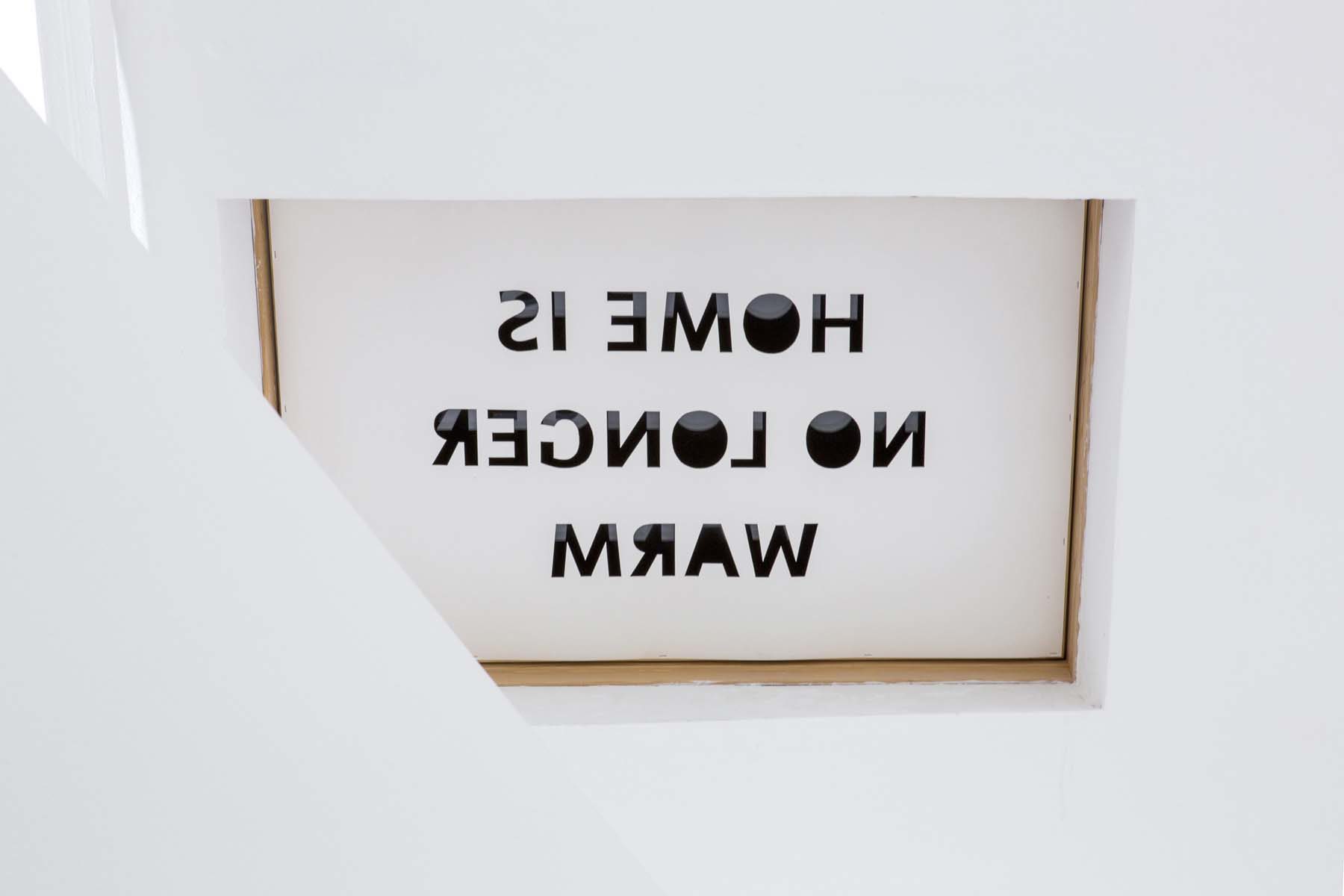 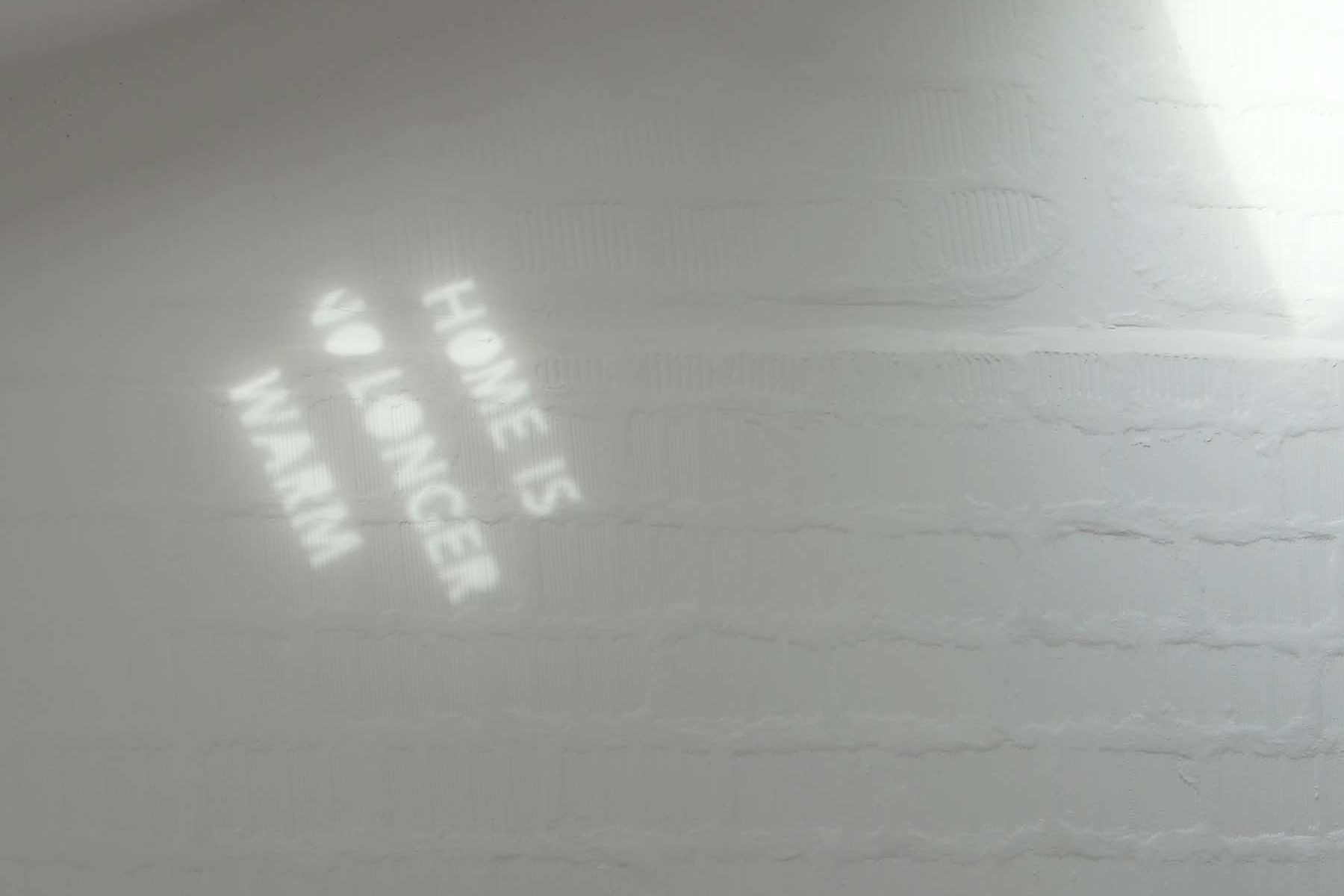 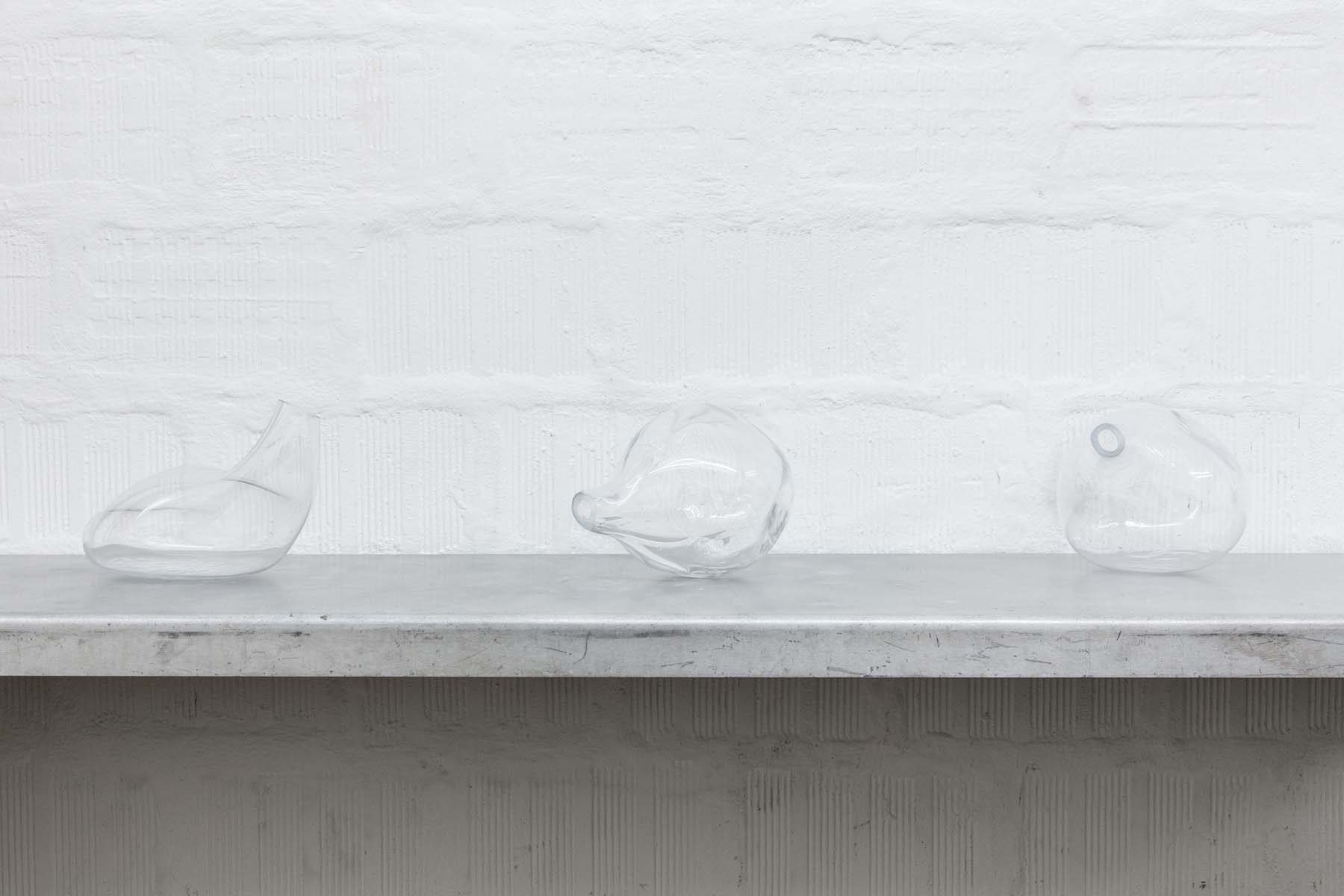 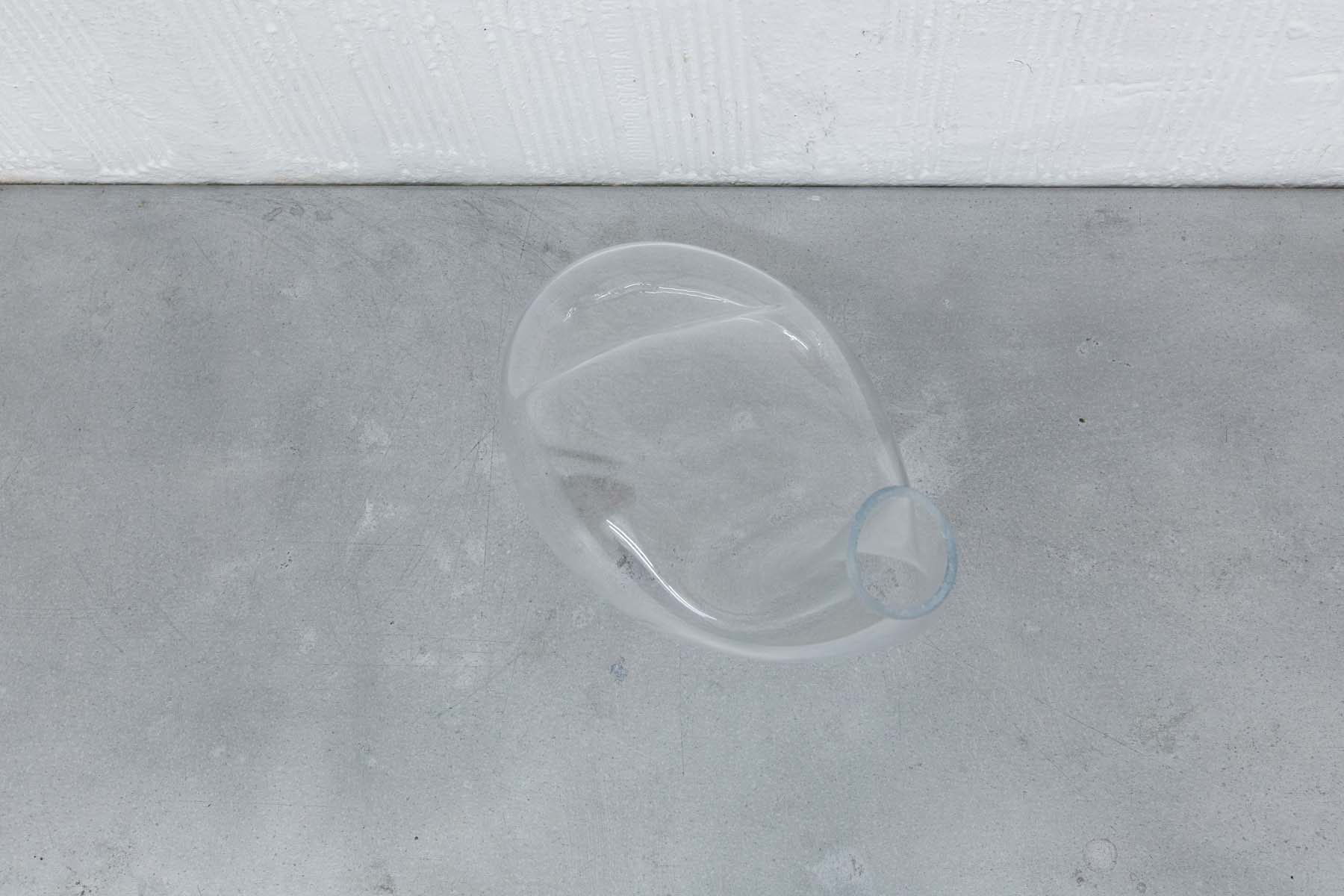 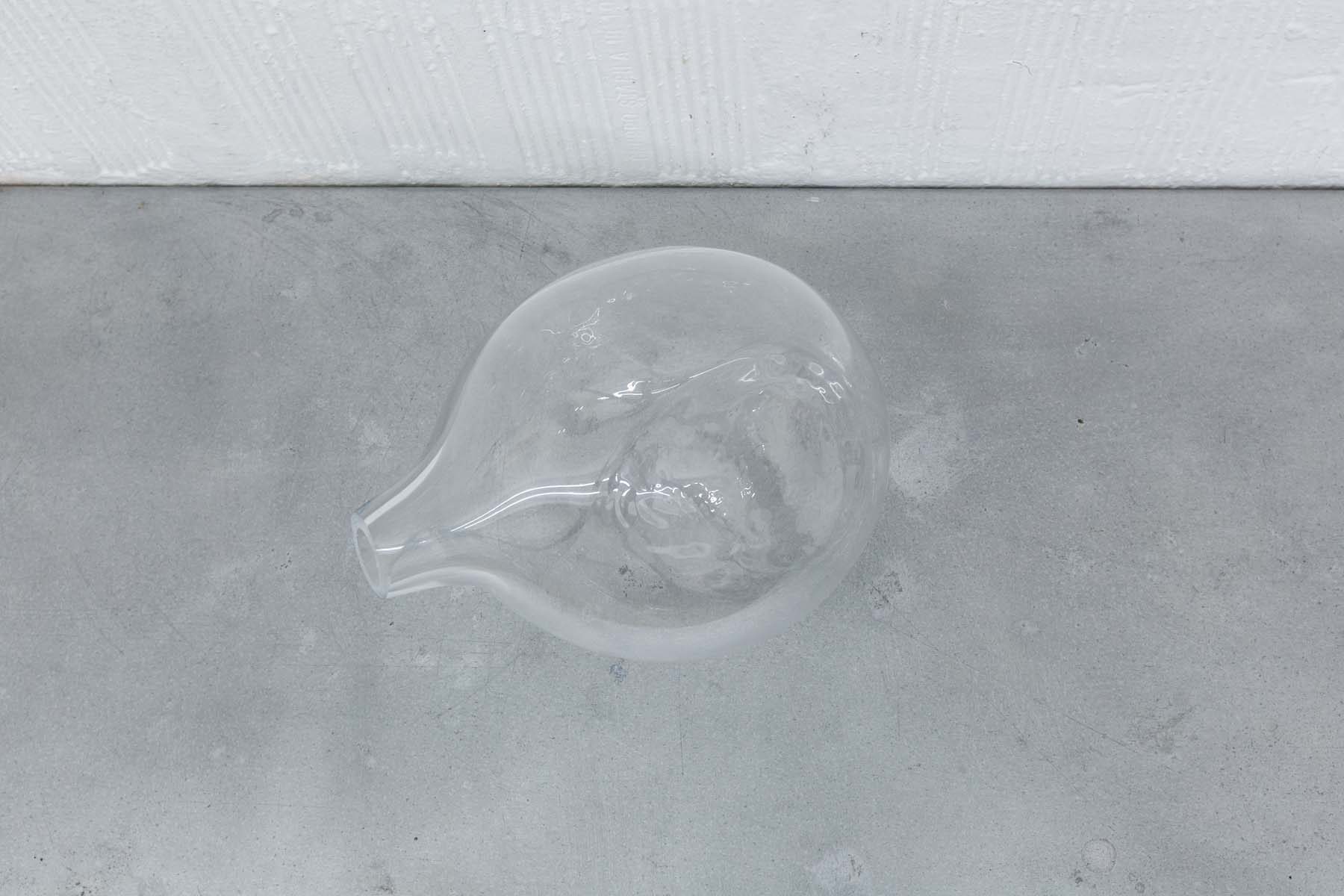 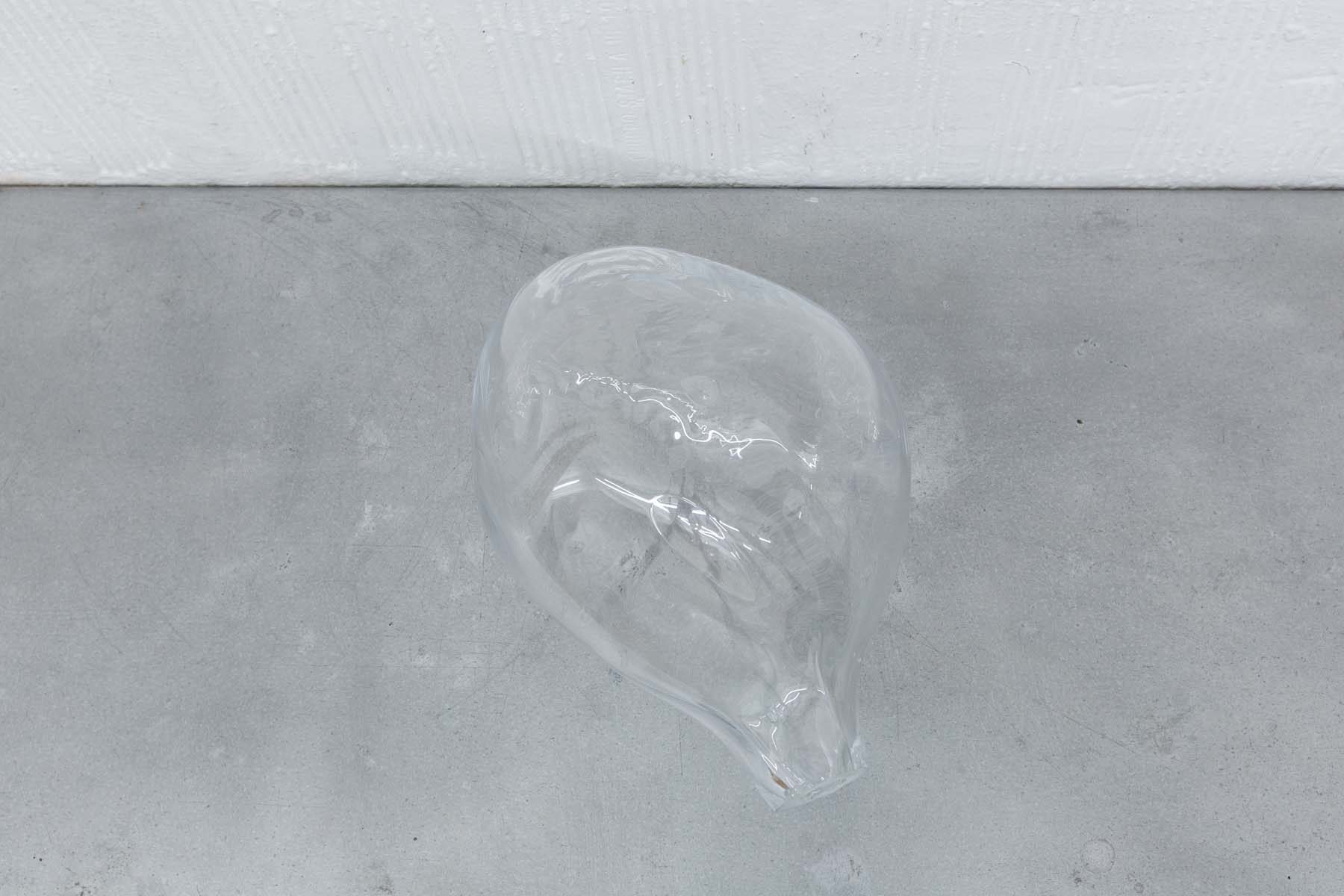 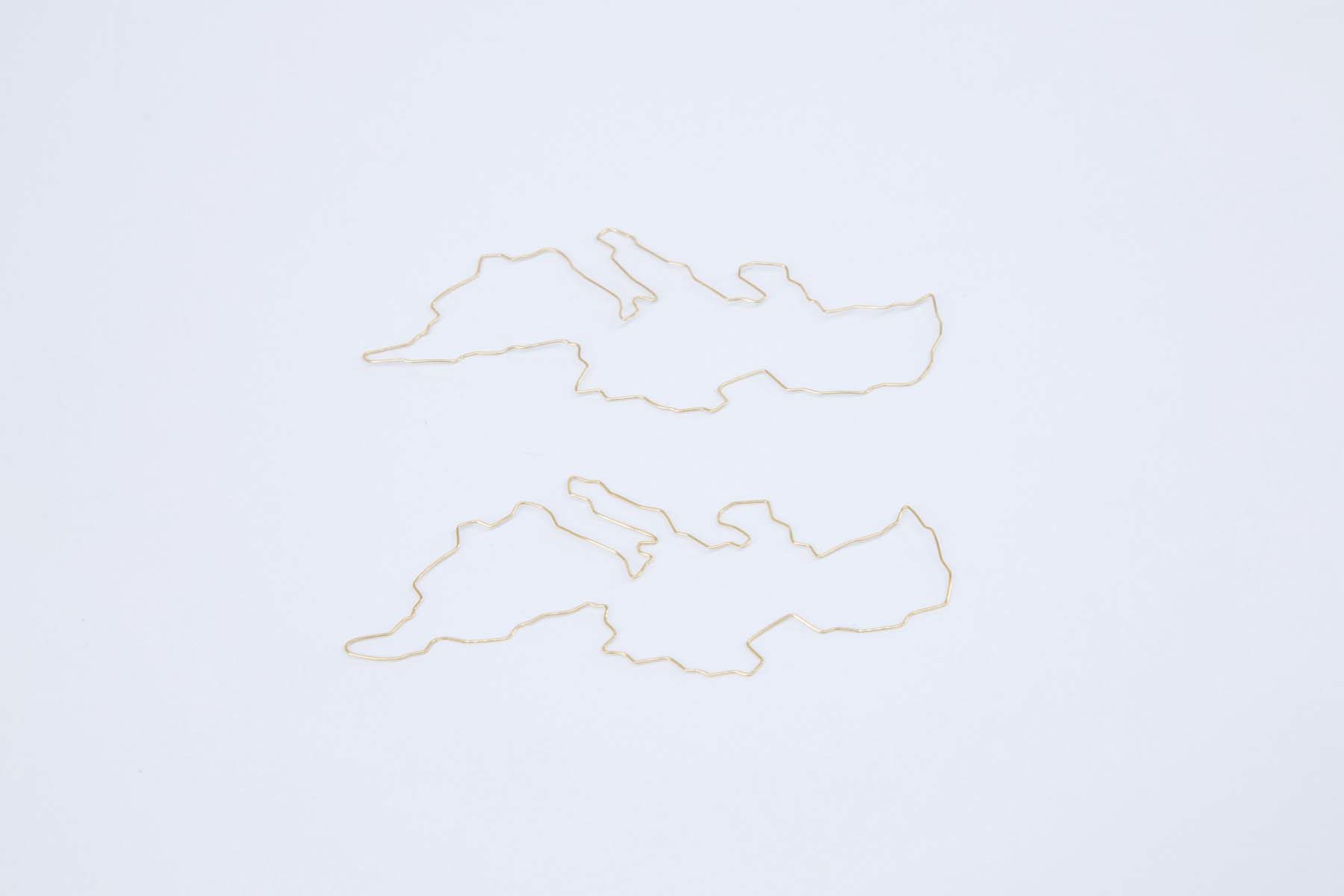 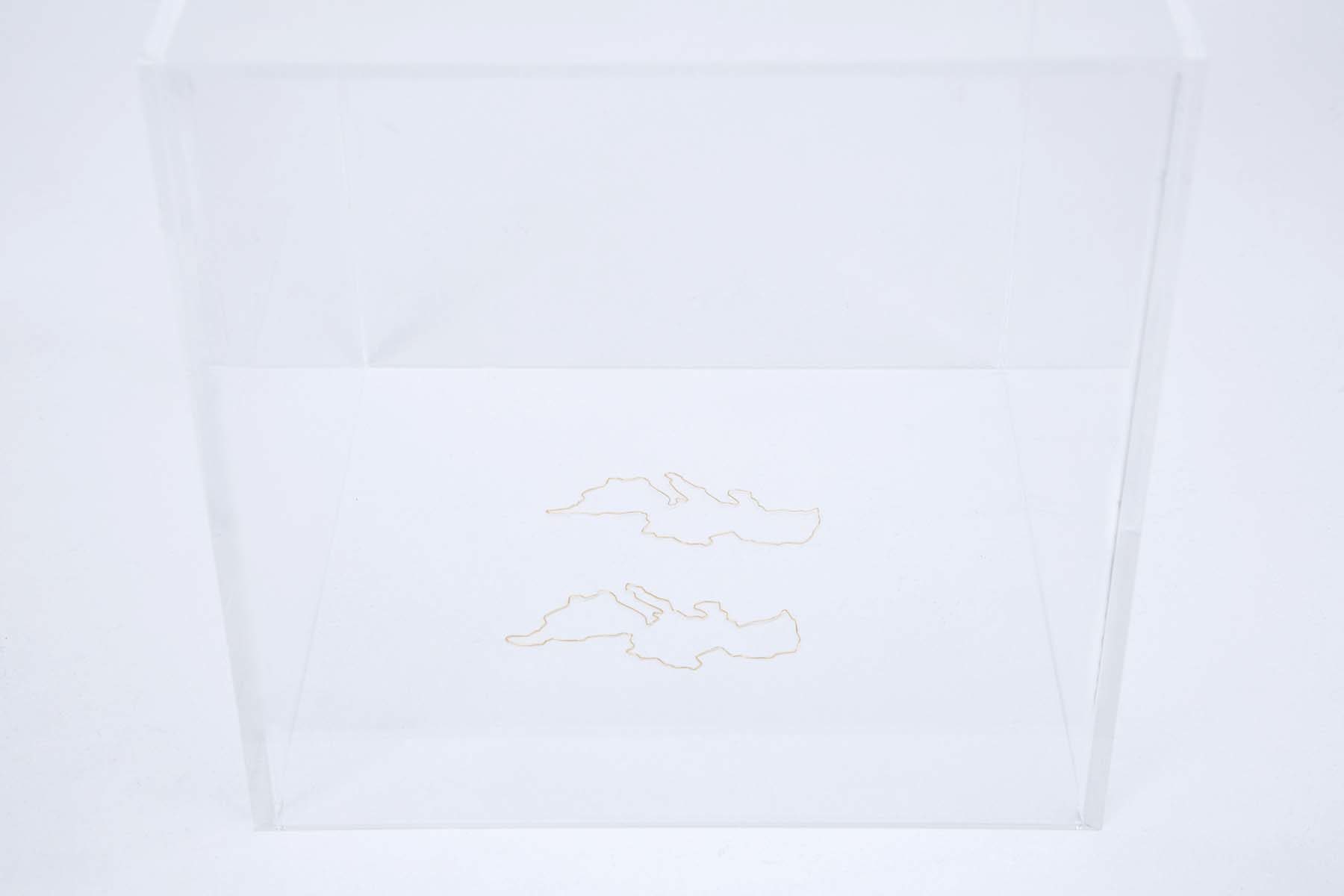 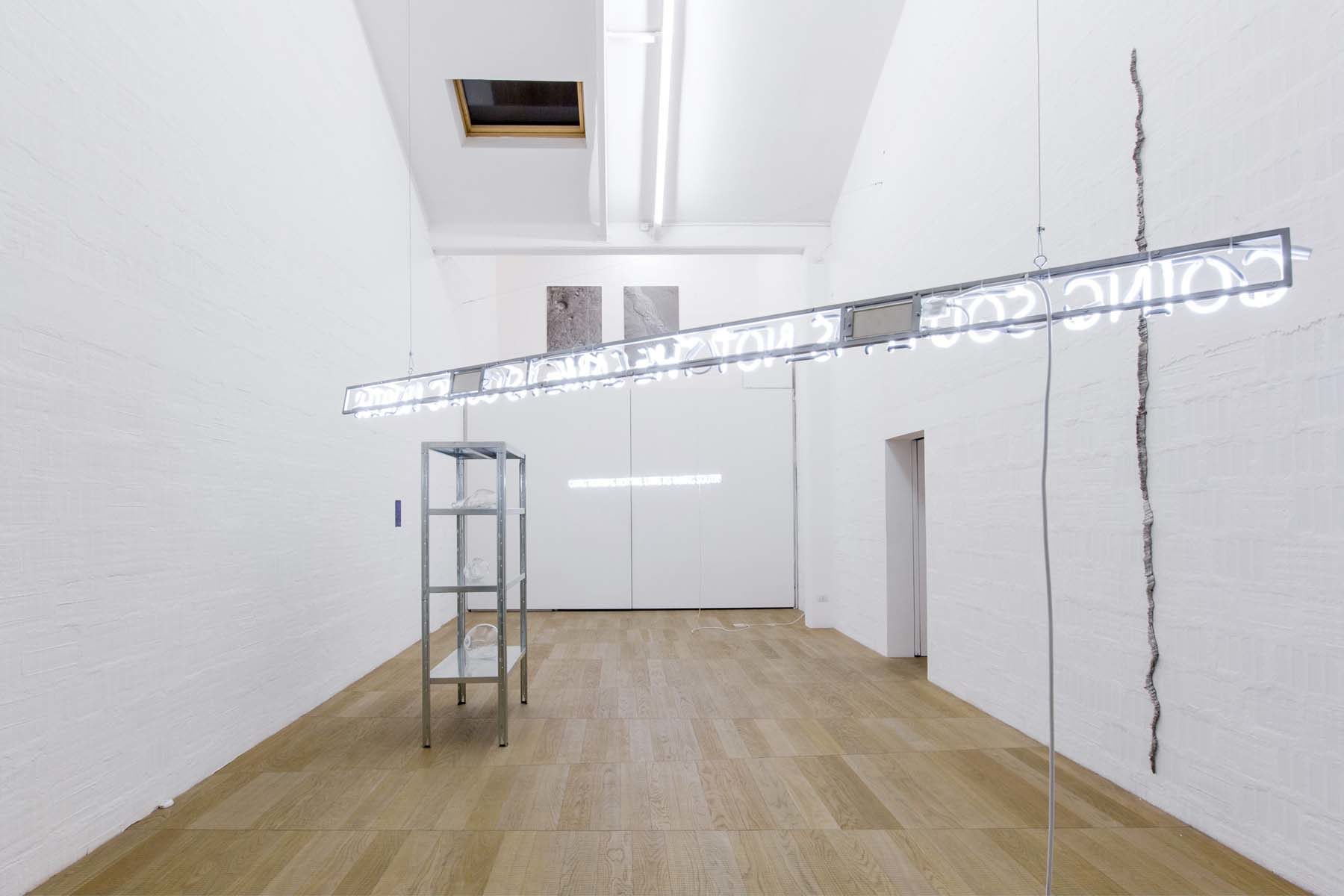 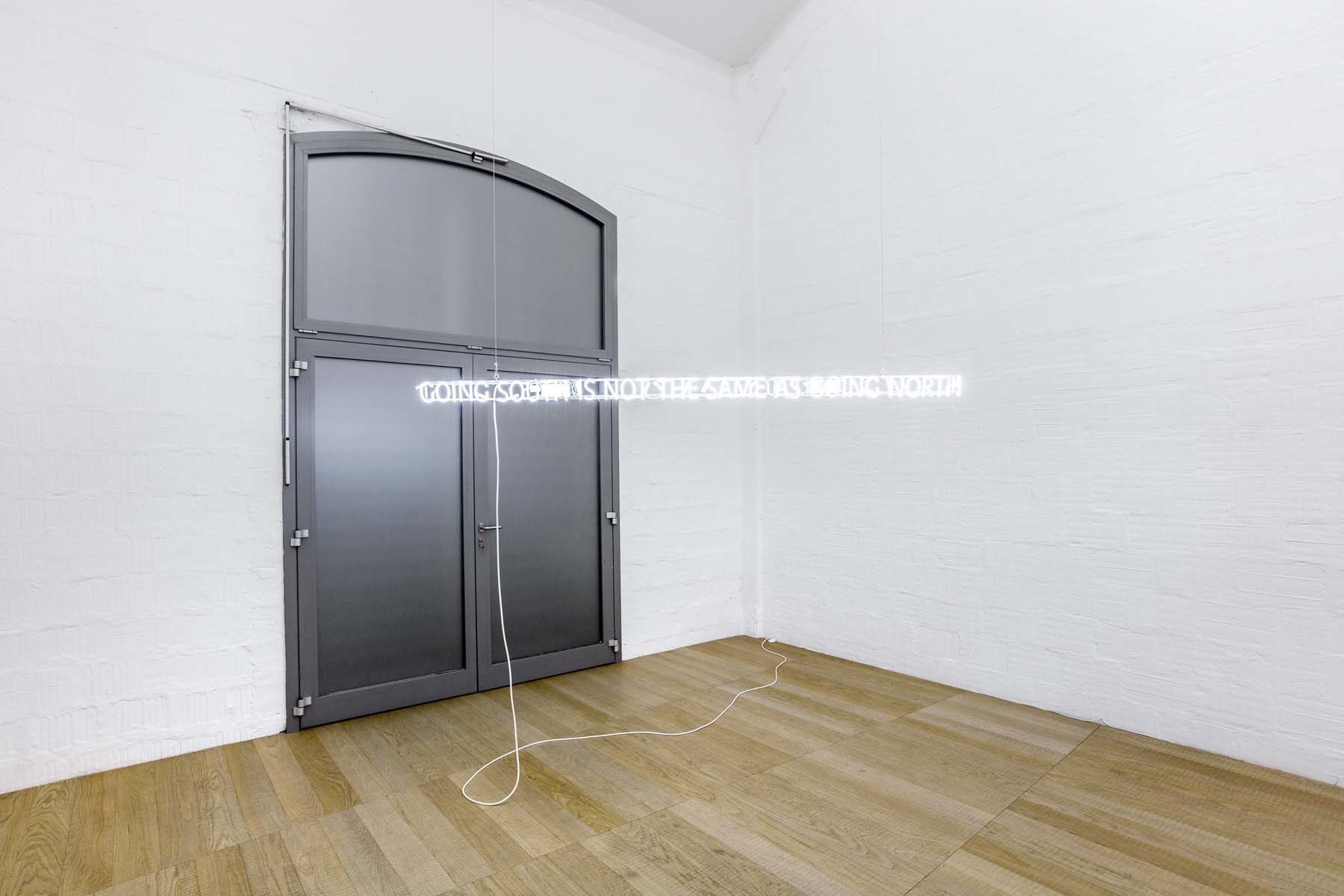 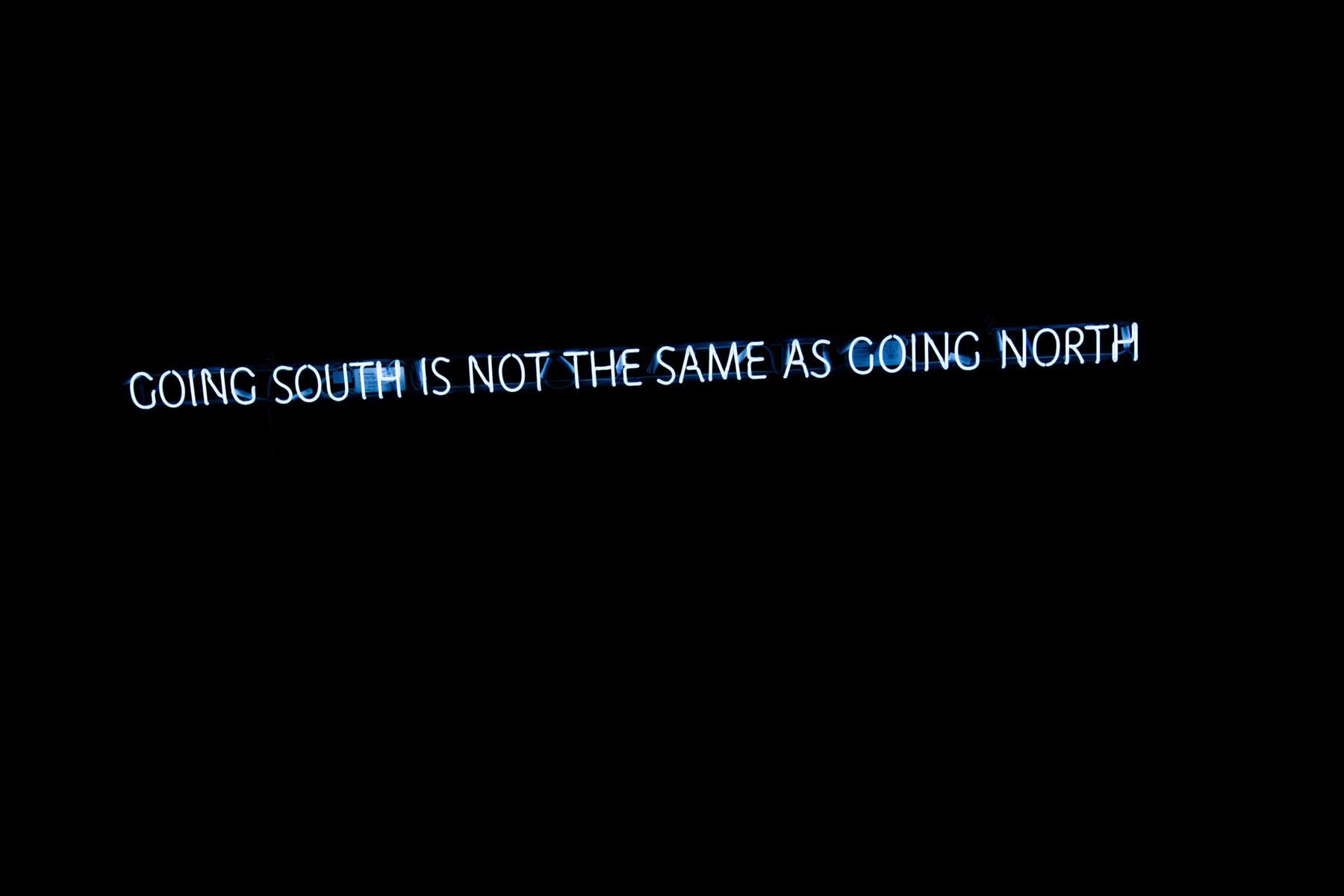 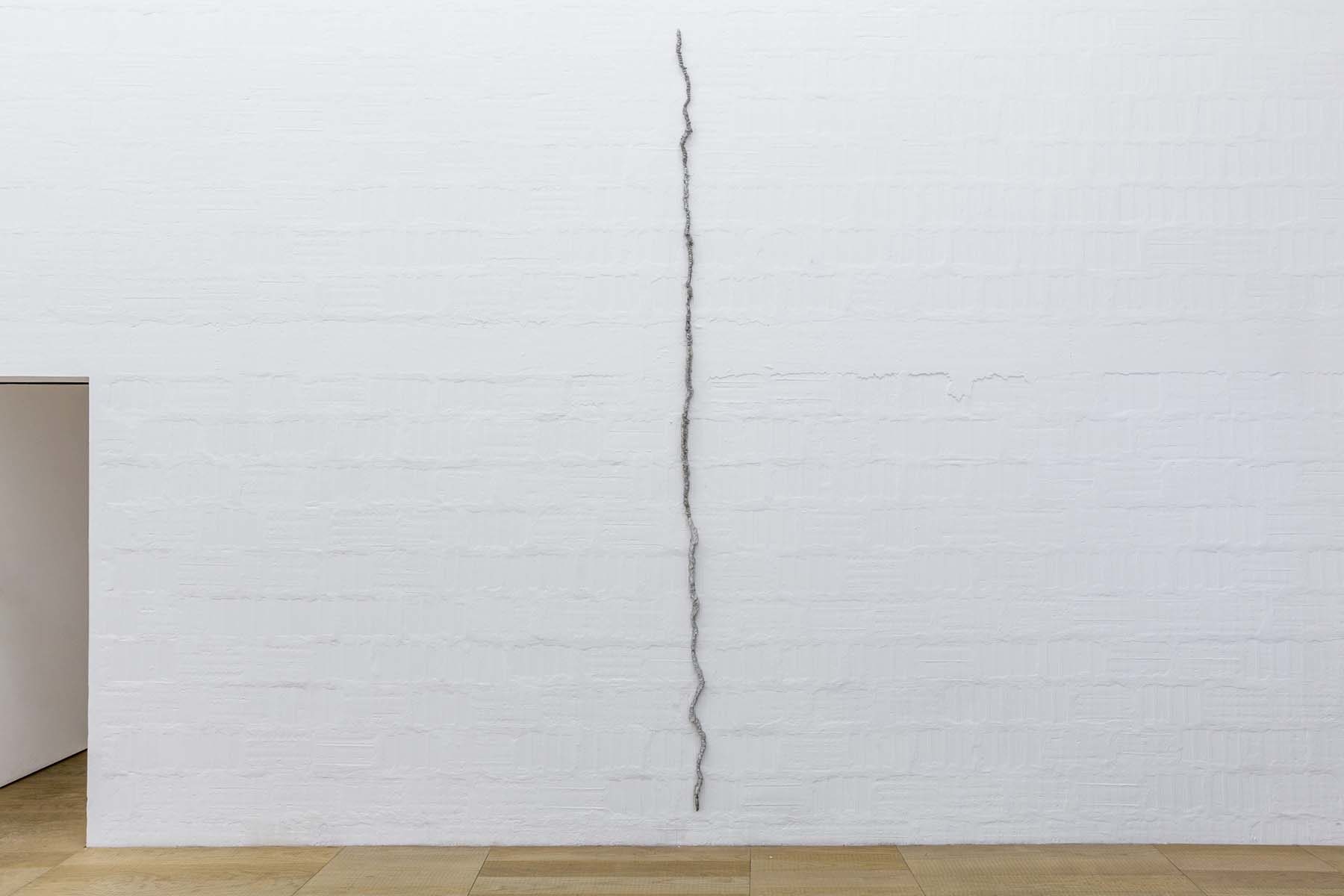 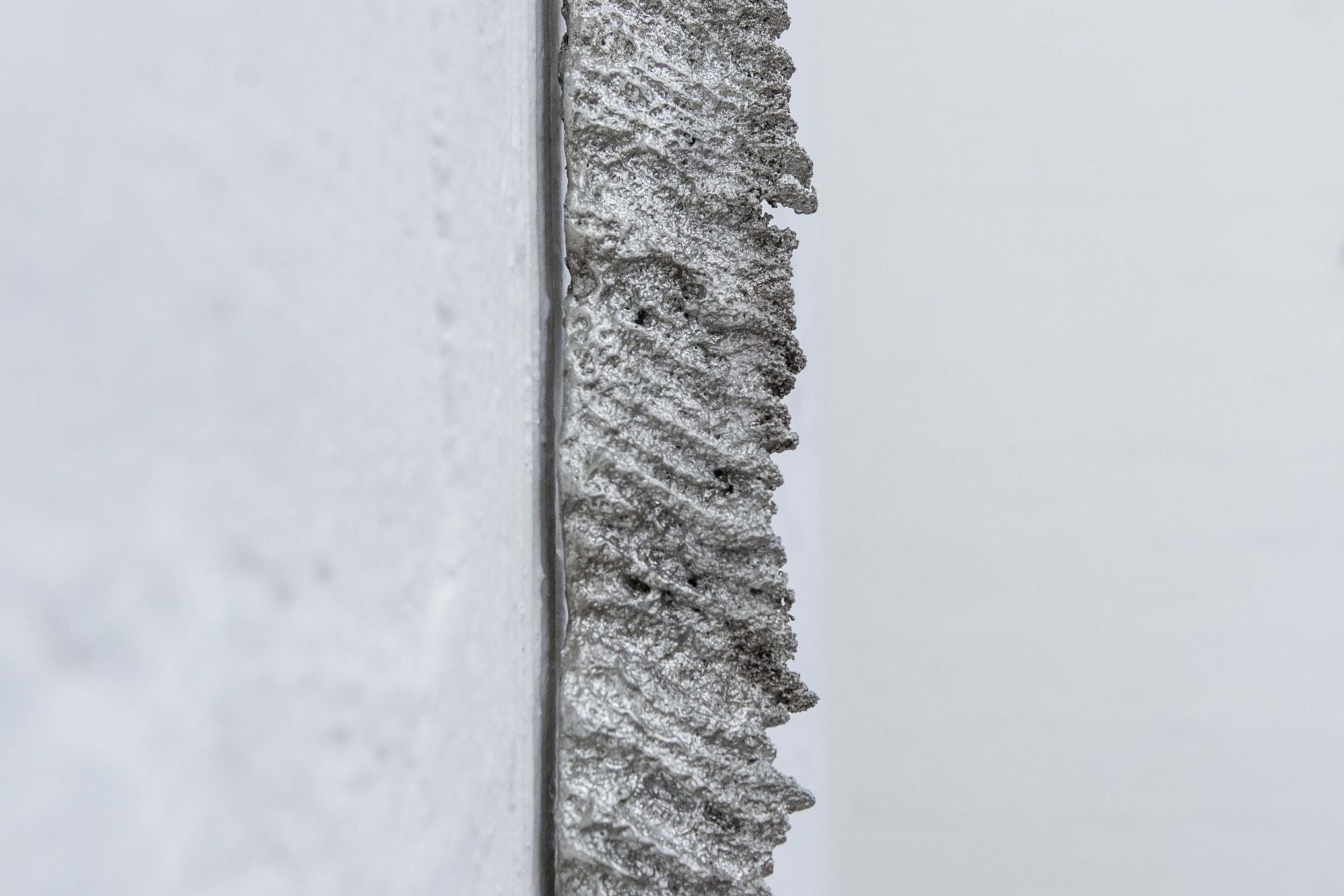 
A famous photo by Robert Capa shows Henri Matisse in his studio in front of one of his works while, with a long rod he used in the studio, he points to the profile of a woman sketched on paper. The floor is covered with newspaper pages to protect the parquet from the paint. By now old, the artist wears a woollen waistcoat and a pair of dark slacks and has a cigarette in his mouth. The clothing and the large but bare space give him a concentrated and tense air. There is, however, an almost invisible element that adds a touch of grace to Matisse’s imposing figure, an unexpected flash of levity lower down: the painter in fact is wearing slippers, without socks. His austere, almost hieratic, body in fact contrasts with the size and pale colour of his bare feet.
It is this very detail that gives a double sense of intimacy, with respect to the place in which the artist works, one that basically seems more an inhabited house than a studio, but above all with respect to his art itself, painting, which becomes a genuine extension of his life. To paint or, in a wider sense, to be an artist – Matisse, perhaps unconsciously, suggests this to us – is exactly the same thing: art finds its meaning only with the flow of our everyday life, which is made up of important events, of course, but also of cigarettes smoked in the studio while wearing slippers.

This photo came to mind while I was looking on my computer at the images of the third edition of the Darsena Residency, hosted by the Massimodeluca gallery in Mestre, which I had the pleasure of following as the curator in July 2017. For that month I shared much of my time with the artists Marco Godinho, and Arnaud Eeckhout and Mauro Vitturini of the VOID duo. They researched, slept, ate, spoke, drank, experimented who knows what else in the gallery. That place, that space consisting of two equally sized rooms, as well as a terrace that overlooks a darsena or harbour in which boats are kept and repaired, was the centre of their life and mine. A nodal centre that superimposed the flow of time, the bodies of the four of us, as well as the directress of the gallery, Marina, and the collaborators Eva and Chiara with whom we shared part of the spaces, time, ideas, and possible solutions.

Intuitively, a residency for artists is only a geometric move, in a determined period, of people from one place to another, from one point on earth to another. But it would be stupid to consider it just a fact of topological movement. In fact places are not all the same. Towns have a reason for being different, they are the result of an infinite sum of stories, environmental, social, cultural, and economical interactions. And then there are the mentality, the manner of working, the food, and all the rest.
Residencies came into existence with modernity. In fact it is little more than two hundred years ago that to go somewhere else became central to the life of artists. Firstly as a journey for getting to know what is far from their own eyes (antiquity, mythology, the sea, light), and then increasingly as a means for searching for new stimuli, new relationships, new opportunities. Furthermore, the epochal transformations that have changed the world since the last World War have made residencies an even more important element for allowing artists to absorb further stimuli, further factors for change. Residencies, that is, act as a multiplying factor with respect to the possibilities artists have for undertaking a research or to fine tune their own practice. A residency, the fact of having to react to new impulses, in fact contributes to suggesting further approaches to artists, to increase the faces of their own multifaceted expression.

The show Tigers in Flip-flops collects together the results of the residency of Marco Godinho and of the VOID duo and condenses them into some fifteen works conceived in Mestre – developed, that is, also from the visual, historical, cultural, and anthropological stimuli of the territory – and that range from glass sculpture to tin casting, photography, a sound art environmental installation, jewellery, neon lights, and even the conceptual use of the written word. The show’s title, blatantly ironic, was inspired by a fact in the life experienced by the artists in the gallery. The life of an artist, like that of the present writer or of any other who undertakes intellectual work in private, consists of a public part of relationships and appointments in town where you have to be careful of how you present yourself or to use the most correct and best adapted words. But it also consists of bare feet, of beers drunk while in bare-chested tranquillity, of days passed reading or listening to music in an armchair, or in your underpants writing at the computer.
The oxymoron “tigre in infradito”, tiger in flip-flops, does not derive from the show but alludes to the complex and ambiguous condition of being an artist in a constant balancing act, called on to resist material difficulties and to try to overcome intellectually the trammels of the present. It is a metaphor for challenge, in the attempt to make a feline leap as though «burning bright in the forests of the night»,i with the existential and poetical complication of being like Matisse in his studio. Bare foot in flip-flops. [*].


A slight change in direction came about by randomly juxtaposing a pair of shoes with a tree branch that Godinho found respectively near to the gallery and in the Venice lagoon. They are distant elements – one the result of man’s work and the other the work of nature – the combination of which produces in the viewers the visual effect of a shift, of a long step to the right. Afterwards, and in a quite accidental way, the artist discovered that the length of the work is anthropometrically identical to the measurement of a long step.

The couple of neon lights of Going south is not the same as going north / Going north is not the same as going south by Marco Godinho are concerned with the psychological perception of geography. They are oriented in such a way that the viewers, while looking at the work, have their eyes turned to the cardinal point indicated by the work itself (respectively to the south and the north). With linguistic tautology, the work recounts how our point of view and our placement are fundamental, not only to a topological reading, but also to the cultural construction that we have of our horizon.

Home is no longer warm is a sheet of paper placed on a window on which are cuttings of the title itself, in such a way as to allow the light to pass through when the sun shines. This generates on the wall of the gallery writing that moves according to the outside atmospheric conditions. The work delicately relates together the external presence of the light with the intimacy of the domestic walls and, in the suggested absence of internal warmth, almost a sense of melancholy.

I misteri delle origini della vita is the first page of a popular book published by Ferni in Geneva, one that was widely read in the 1970s, and that the artist has covered using a ballpoint pen thus making it difficult to read the title. In this way the mysteries of which the title speaks are also made visually mysterious, so creating full unity between the form and the content.

In Lunar Cycle Marco Godinho relates together his own Darsena Residency period with the cycle of the moon on the days he spent in Mestre. On the first page of twenty-nine copies of the Gazzettino newspaper (from 9 July to 6 August 2017) the artist, in fact, drew the moon he could see from the gallery each day, and so composed a series beginning and with a full moon. The part showing the moon allows us to see the day’s news, some titles of parts of articles, while the sky part is dark blue and covered by thousands of marks made with a ballpoint pen. In this poetical way, while the sky remains silent, the moon reveals something of our human condition.

The Mediterranean Sea as a suspended territory is a work consisting of two gold wire earrings in the shape of the Mediterranean Sea that, during the inauguration, will be worn by the gallery’s directress. The work alludes to the inextricable network of relationships – cultural, economic, and social – that links the people who face up to this sea, and that the geopolitical events of recent months seem to have made us forget. It is both a warning about our condition and a hope for change.


The sound of the human voice was the starting point for Au Claire de la lune, a sculpture that VOID made on the beach after having incised their own voice in the sand while singing this famous French song; this was made possible by a special device constructed on the lines of the phonoautographs used in the second half of the nineteenth century for recording sounds. The groove was then filled with melted tin and so the sound track had become an articulated metal sculpture on the surface of which we can read the ripples of the voice. Au claire de la lune, what is more, traces the spatial movement undertaken by the artist and, in a way that is perhaps even more meaningful, the ordinary and linear development of time of which it becomes a cast. In this way the work as a whole suggests how the voice can be condensed inside metal and record/sample the past.

The series of sculptures Glasswork made by VOID derived from the idea of using sound for modelling glass according to the traditional working techniques in Murano. After having been formed by the master glassblower, the masses of glass while still hot were placed on metal surfaces to which a transducer speaker transmitted sound waves. These waves literally moulded the surface which took on the sinusoidal form of the sound. The glass material, through which the traces can be seen, in this way fixes within itself a vibration that can be caressed with the fingertips.

The work Orgue basaltique was made by using hundreds of strips of stone wool, a material used by the building industry for its properties as an acoustic and thermal insulator, and they have been installed in the gallery to construct a seabed. The visual aspects thus combine with the material’s characteristics to create an alienating and submerged world, one geometrically broken down into lots of columns that capture both sound and our eyes, which are left in an uncertain balance between an analytic objective vision and fantastic imaginary details.

The photos from the series My microphone is a camera originated in an analysis of the bed of the Venetian lagoon undertaken with a sonar. A sonar is an instrument that allows obtaining a spatial mapping of a place on the basis of phenomena of acoustic reflection over which are superimposed the waves they themselves emit. Thanks to data supplied by the CNR’s institute of marine science, the artists were able in this manner to transform into visible images the different portions of the seabed that were mapped. The data relative to the returning wave are transformed in this way into a two-dimensional form, and into photographs that are both traces of sound and of surfaces where the earth and water touch.